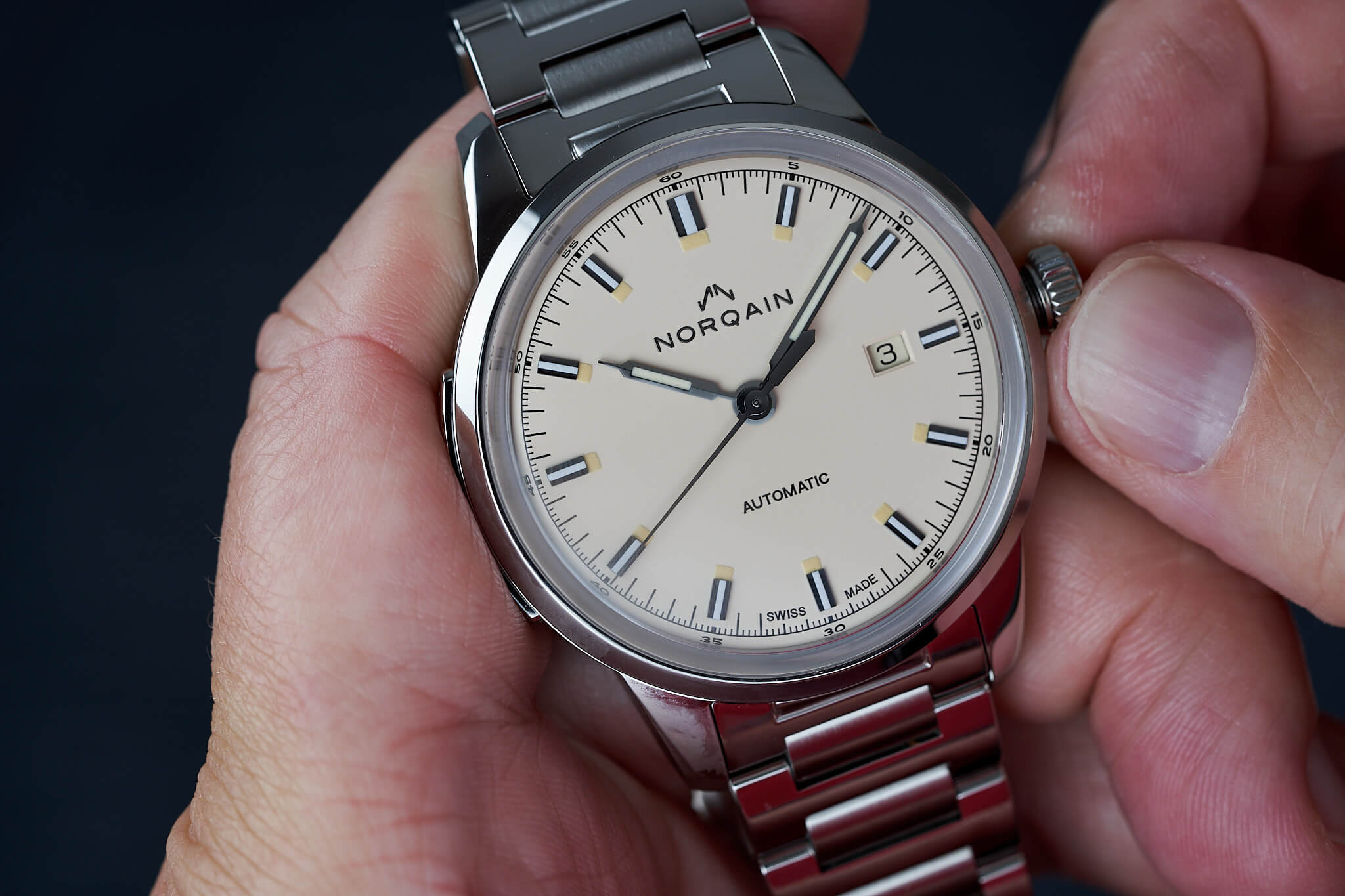 Sport watches occupy an interesting space in the watch world. While the term encompasses many different watch types, it isn’t as broad a category as tool watches. Sport watches tend to be simpler on the surface without rotating bezels and cluttered dials. The Norqain Freedom 60 is the brand’s take on the classic sport watch.

Going a little deeper into sport watches, it’s easy to see the appeal for watch manufacturers to produce them. They usually go great in just about any situation, can be dressed up or down easily, and can be derived from another watch the brand already makes. In the case of the Norqain Freedom 60, the watch was part of the brand’s original catalog and seems to serve as the base for some of their other watches. Let’s take a closer look at the Freedom 60.

In all honesty, I was nervous when I took the Freedom 60 out of the box to try it on. The watch looked big in my hands and I was sure that this was going to wear large on my wrists. The 42mm watch is almost all dial thanks to the fixed stainless steel bezel. Adding Norqain’s signature nameplate on the side of the case and a long lug-to-lug distance, I was sure this watch was going to take over my wrist.

Thankfully, that wasn’t the case. The beefy lugs turn down quickly to mitigate some of the lug-to-lug distance, helping the Freedom 60 wear comfortably. While it is comfortable, and I felt it didn’t wear too large, the Freedom 60 is a heavy watch. There’s no denying that you will know it is there when you’re wearing it, but it isn’t cumbersome. The watch is mostly balanced on the wrist, perhaps leaning slightly toward heavy.

The other two Norqain watches I reviewed before the Freedom 60 were on straps. This watch is the first time I’ve experienced one of Norqain’s bracelets.  The bracelet links articulate beautifully and drape around the wrist effortlessly. I’ll discuss some quirks with the bracelet later on, but for the most part the bracelet is executed extremely well for such a young brand.

The combination of the polished hands and markers with the cream dial creates some interesting effects that have a good impact on readability. If the light is not directly hitting the dial, the hands appear black, which creates the most contrast between the hands and dial. However, even when light is directly shining on the dial, the hands don’t wash out. They tend to have a light gunmetal appearance and still stand out against the cream dial.

A sports watch should have a relatively simple dial. It needs to be readable at a quick glance. The Norqain Freedom 60’s dial executes this perfectly. As I discussed above, readability isn’t an issue whatsoever. The markers and hands manage to stand out in any light against the cream dial. This effect is further amplified at night when the lume is glowing. The lume pattern is simple yet effective.

I’m thankful Norqain decided to color-match the date wheel with the dial. This simple change is often ignored in favor of off-the-shelf date wheels in black or white. The color-matched date wheel allows it to blend into the dial and not throw off the balance.

Norqain opted for minimal text on every part of the dial. Branding is at 12 o’clock with Automatic and Swiss Made at 6 o’clock. The only other printing on the dial is a minute track flanking the markers on the outside of the dial. The minute track isn’t obtrusive if minimalism is your thing as the marks are partially distorted by the sapphire crystal. With that said, they remain readable if you’re looking for them.

All the watches I’ve reviewed from Norqain have been finished well and the Freedom 60 is no exception. The brushing and polishing are all executed perfectly, as would be expected from a watch at this price point.

Norqain managed to keep the case of the Freedom 60 relatively slim despite the 42mm diameter.  Coming in at 11.4mm thick, this isn’t a tall watch and has plenty going on to break up the lines on the case. The Freedom 60 looks and wears thin, even thinner than the 11.4mm would suggest.

The Freedom 60’s bracelet is solid and comfortable but there are a couple improvements I would like. I would like more of a taper on the bracelet, which would bring down the heft of the watch and make it a little more comfortable on the wrist. The other issue I have is with the clasp. The micro adjustments are all internal in the clasp. You cannot use a spring bar tool from the outside to adjust the micro adjustments; it must be done from the inside with a spingbar tool. This is awkward and extremely difficult to get lined up correctly. It creates a cleaner look but that’s all it does. It isn’t user friendly.

When it comes to pure sport watches in the $2,000 price bracket the options aren’t quite endless, but there are fewer choices than $2,000 dive watches. Let’s see how the Norqain Freedom 60 stacks up against its closest competitors.

This classic Tag is slightly more expensive than the Norqain but packs a similar feature set. A simple dial layout with a date at 3 o’clock gives the Calibre 5 a similar look and feel but it comes in a smaller package at 39mm. The smaller diameter might make a better fit for those with smaller wrists. The caliber 5 movement is based on the ETA 2824 just like the movement found inside the Freedom 60. A major sticking point for me with the Tag is the annoying 19mm lug width (The Norqain has a 20mm lug width).

While the ProPilot is billed as a pilot watch, it is undeniably sporty and can easily be dressed up or down like the Freedom 60. Aside from the numerals on the dial, the ProPilot packs a similar punch to the Norqain. An excellent bracelet also helps this watch stand up to the Freedom 60. Where the Oris has an advantage is how it punches above its weight class.  It is one of my favorite models offered by Oris and comes in marginally cheaper than the Freedom 60 at $1,900 on the bracelet.

At this point, Norqain has made a name for themselves. It’s difficult to launch an independent Swiss brand with watches starting close to $2,000. It’s hard to convince consumers your brand is worth that kind of money. Despite that, Norqain seems to have pulled it off. The Freedom 60 is a great example of why.

The Freedom is good-looking and solidly built and there’s not much you can ask beyond that for a sports watch. The biggest test for me if a watch is good is whether I would purchase one or not. Of all the Norqains I have reviewed, this would easily be my pick (but probably with a blue or black dial). It offers the best value and looks the best to my eyes.

Check out more Norqain reviews at The Watch Clicker

More Images of the Norqain Freedom 60 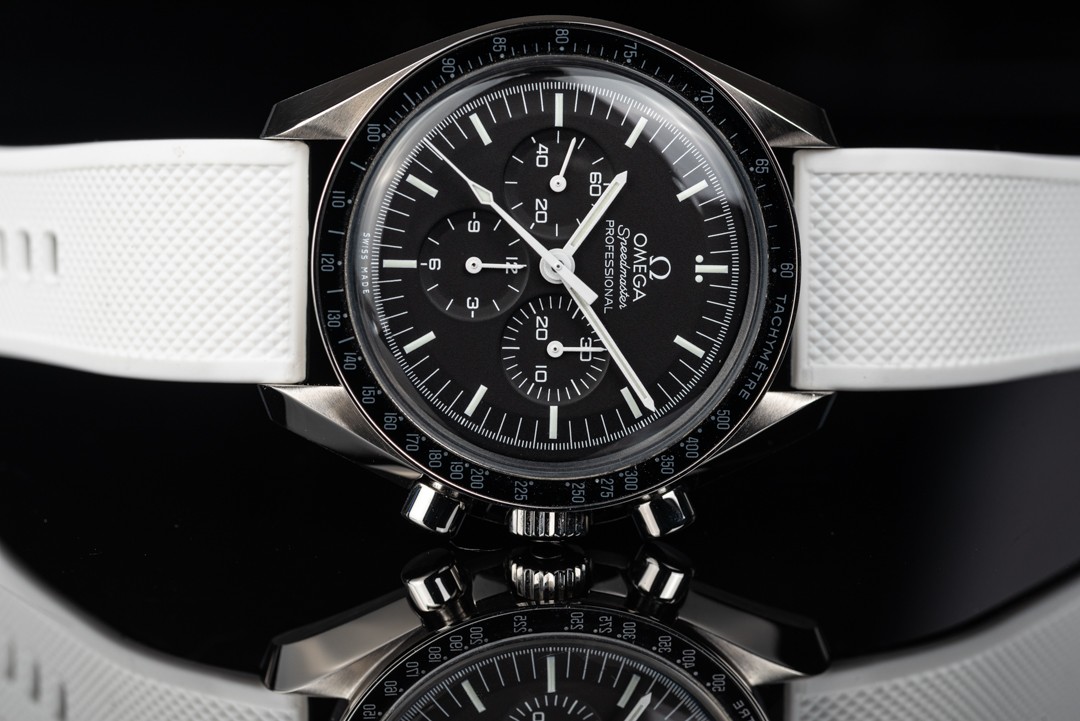 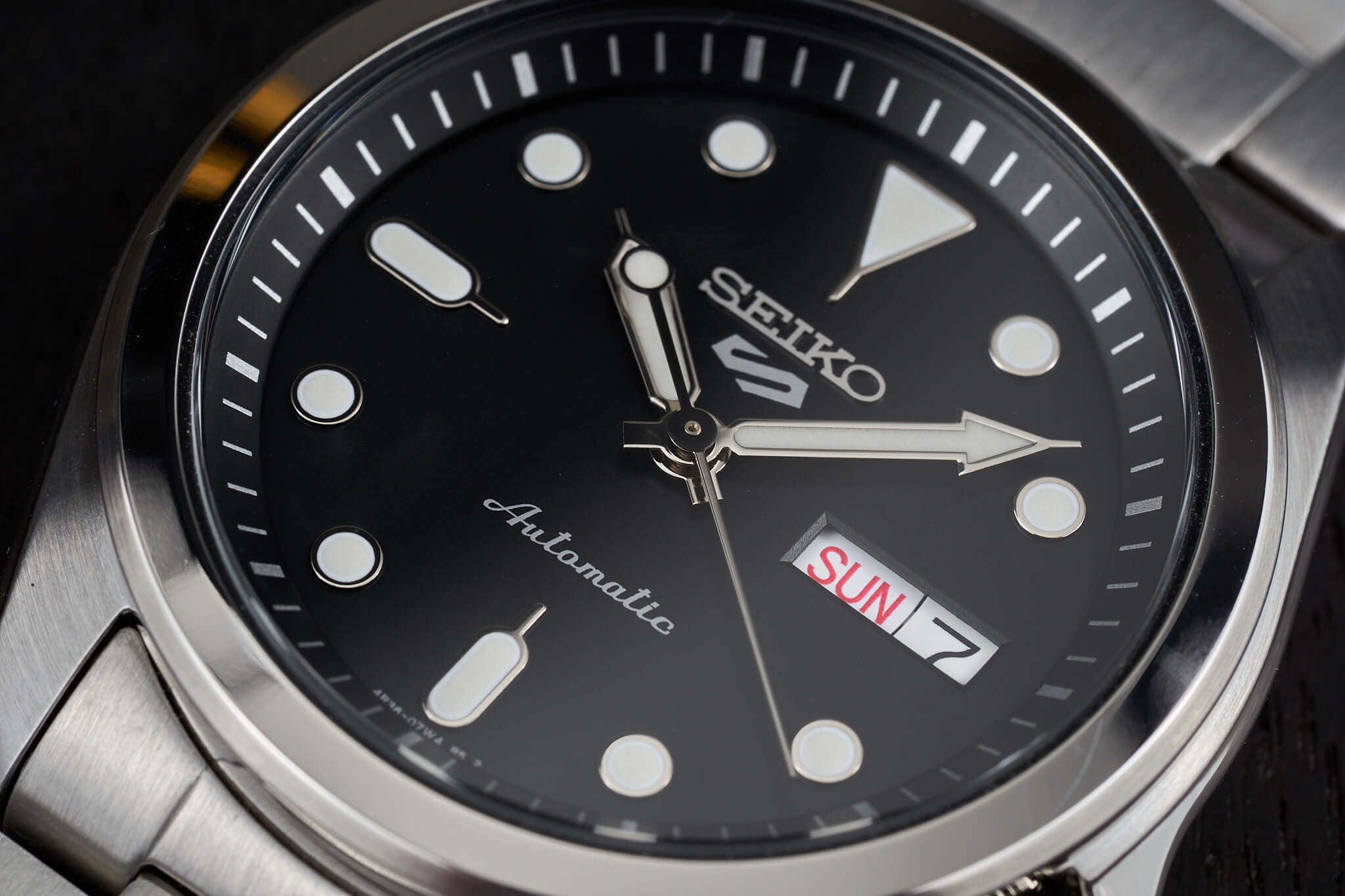