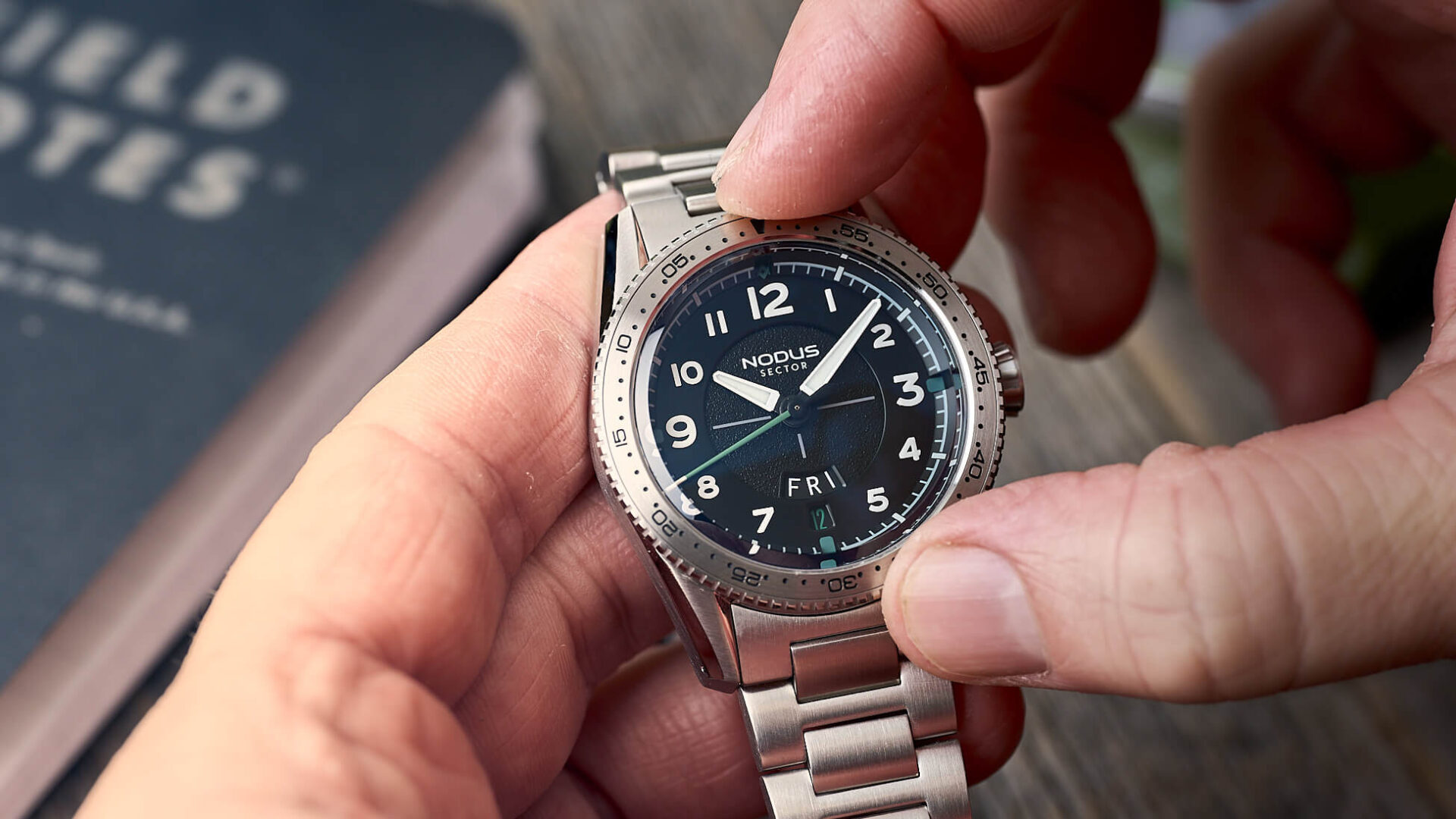 The Nodus Sector has become a fan favorite in the veteran microbrand’s lineup. The Sector series aims to be an affordable alternative to their catalogue of purpose-built dive and tool watches. Nodus launched the Sector series originally with the Dive and Field. As their names suggest, they each had a different look and purpose but shared the same case.

I reviewed the Sector Dive last year (review here) and as I mentioned above, the Pilot shares the same case as the Dive. However, because of the stainless steel bezel and dial layout, the Pilot feels like an entirely different watch. Perhaps the modern pilot watch dial layout is what makes the watch feel different. It is hard to say, but the best part is that even though it feels different, it still carries the comfort the Sector case offers. The Sector case has long, faceted lugs that give the 38mm-wide case a 47mm lug-to-lug. If the case were flat, the relatively long lug-to-lug might look awkward but the lugs angle down as soon as they leave the case, making the lug-to-lug look and feel shorter than it is.

The Sector Pilot wears true to its case height of 12.75mm. I found the wrist to crystal measurement to be 12mm, so the watch doesn’t sink into the wrist all that much. However, because the lugs feature a steep curve, the Sector Pilot hugs the wrist and remains comfortable. When it comes to Seiko NH movements, anything under 13mm isn’t all that thick so Nodus has done a great job thinning out the case.

I don’t wear a lot of pilot watches, but I do know that one of their calling cards is a large crown, allowing the wearer to use the crown while wearing gloves. Nodus has included a large, tapered crown on the Sector Pilot. When it comes to grip and using the crown, it is perfect. However, I cannot say the same about it while it is on the wrist. Because of the crown’s position, size and sharp edges, I found it to be extremely uncomfortable. If I needed to adjust the watch’s position while on my wrist, it would often dig into or scratch my wrist. If the edges near the widest part of the crown had been rounded over a bit, this might have mitigated this. With this said, I love the look of the crown, I just wish it were more comfortable on the wrist.

One addition to the Sector Pilot that I love is the day/date complication. I felt that the date window on the Sector Dive was a touch small, but that is not the case on the Pilot. The day and date are clearly visible as the 6 o’clock position and take up a good chunk (in a good way) of real estate of the bottom half of the dial. Nodus applied a nice touch to the date wheel by making the printing green to match the accents on the rest of the dial.

I always title this section Dial Details, but when it comes to the Sector Pilot, there is an extra emphasis on details. There is a lot going on with the Sector Pilot’s dial and a couple of things are subtle enough that they may not be noticed. My favorite touch is where Nodus decided to place their logo on the dial. It is not directly above Nodus as it is on their other watches. Instead, it is nestled at the very top of the dial above the 12 o’clock marker. It’s a great way to integrate their logo without making the dial too busy.

The markers and hands are filled with plenty of lume which always makes the time visible. When the lume isn’t glowing, the wide hands are a great take on a modern pilot watch. The seconds hand is accented green and tipped white with lume. Nodus did a fantastic job integrating their own DNA into a pilot watch while keeping the soul of what makes a classic pilot watch dial.

The Sector series is called Sector for a reason. Each watch in the series has a different take on a sector dial. The Sector Pilot takes a page from the Field and Dive and incorporates texture in different ways. The inner part of the dial features a gravel-looking texture and a small crosshair. As the dial transitions to the outer section where the numerals are, the dial is texture-free to allow the numerals to pop out from the dial.

Nodus has incorporated the modern look of the other Sector models into a pilot-style watch and it works perfectly despite the non-pilot watch diameter of 38mm. The numerals are not printed or applied; they are molded lume. Combined with the white outlined hands, the dial is always legible, no matter how dark it is. Nodus has never skimped in the lume department and the Sector Pilot is no exception.

If you haven’t gathered by now, I am confident in how legible the Sector Pilot is. Aside from the hands and markers contributing to this, Nodus has a trick up their sleeves which also helps legibility. The sapphire crystal is flat on the top but features a domed underside. This creates almost no distortion when viewing the watch from different angles, but it does give the watch extra legibility when viewing from extreme angles. I won’t say it is quite the same as an oil-filled watch, but it is pretty close. I’ve been wishing that more brands would ditch double-domed sapphire crystals and Nodus has proven that there are better alternatives to the double-dome.

As with all Nodus watches I’ve reviewed, the case finishing is superb especially given this is Nodus’ affordable option from their catalogue. They’ve applied the same level of finishing as they do with their higher-tier offerings. The transitions are crisp and blemish-free.

The large, polished bevel that runs the length of the case gives a little bit of flash to the watch but also serves to keep the lugs from looking too chunky. The lugs certainly have a little weight to them but because of the turndown as they leave the case and the polished chamfer, they look elegant yet sporty. The lugs also feature an inner bevel where they meet the bracelet. This bevel has been on the Sector case since its inception but I’m curious if the Sector Pilot would look better without it and the case were flush with the endlinks.

To my surprise, the bezel doesn’t click. That’s right, Nodus has opted for a friction bezel. If you’re unfamiliar with a friction bezel, it means that the bezel will turn smoothly in either direction with no stops. It is an interesting choice, but I like the decision and found that it had just the right amount of tension to turn easily without being too easy to move accidently. That said, it is entirely possible to bump this bezel and move it so this shouldn’t be used for timing in high-impact activities.

In the above photo, the bezel is set to countdown from 15 minutes.

Nodus has been doing some great things with bracelets in recent years and the bracelets they include on their higher-tier offerings, like the Duality, are fantastic. The Sector Pilot’s bracelet is essentially the same as those bracelets save for the polished chamfers on the links. The Sector series’ bracelets also feature a double push-button clasp (a personal favorite of mine). Where I would like to see Nodus make an improvement on their bracelet is the first center link that is connected to the endlinks. This link is squared off and can have a significant-looking dropoff if your wrist isn’t large. If this center link were rounded over on the watch side of the link, it would dramatically increase its look.

The Sector Pilot is the most daring design of the Sector series. The Dive, Field, and Sport variants don’t necessarily do anything groundbreaking but that doesn’t mean they aren’t stellar-looking watches. The Pilot is the watch that takes risks. The day/date complication at 6 o’clock, the logo nestled at 12 o’clock, and the friction bezel all make for a watch with some edge to it. I wish those edges weren’t on the crown, but I realize that can also be subjective and is not necessarily a design flaw.

I really like what Nodus is doing with the Sector series. Each watch in the series has its own vibe and they don’t feel like small iterations of each other. Each one could stand on its own as a separate watch (and they do).

I’m interested to see where Nodus goes beyond this. They’ve launched 4 great watches in the series in a relatively short timeframe. Nodus likes to iterate on their own designs (and they’ve already done so with the Dive and Field). I would like to see Nodus create an entirely new Sector series with new cases. They’ve proven they can do some creative things with the same formula of case design; I want to see what they can do with even more.

Check out more Nodus reviews at The Watch Clicker

More Images of the Nodus Sector 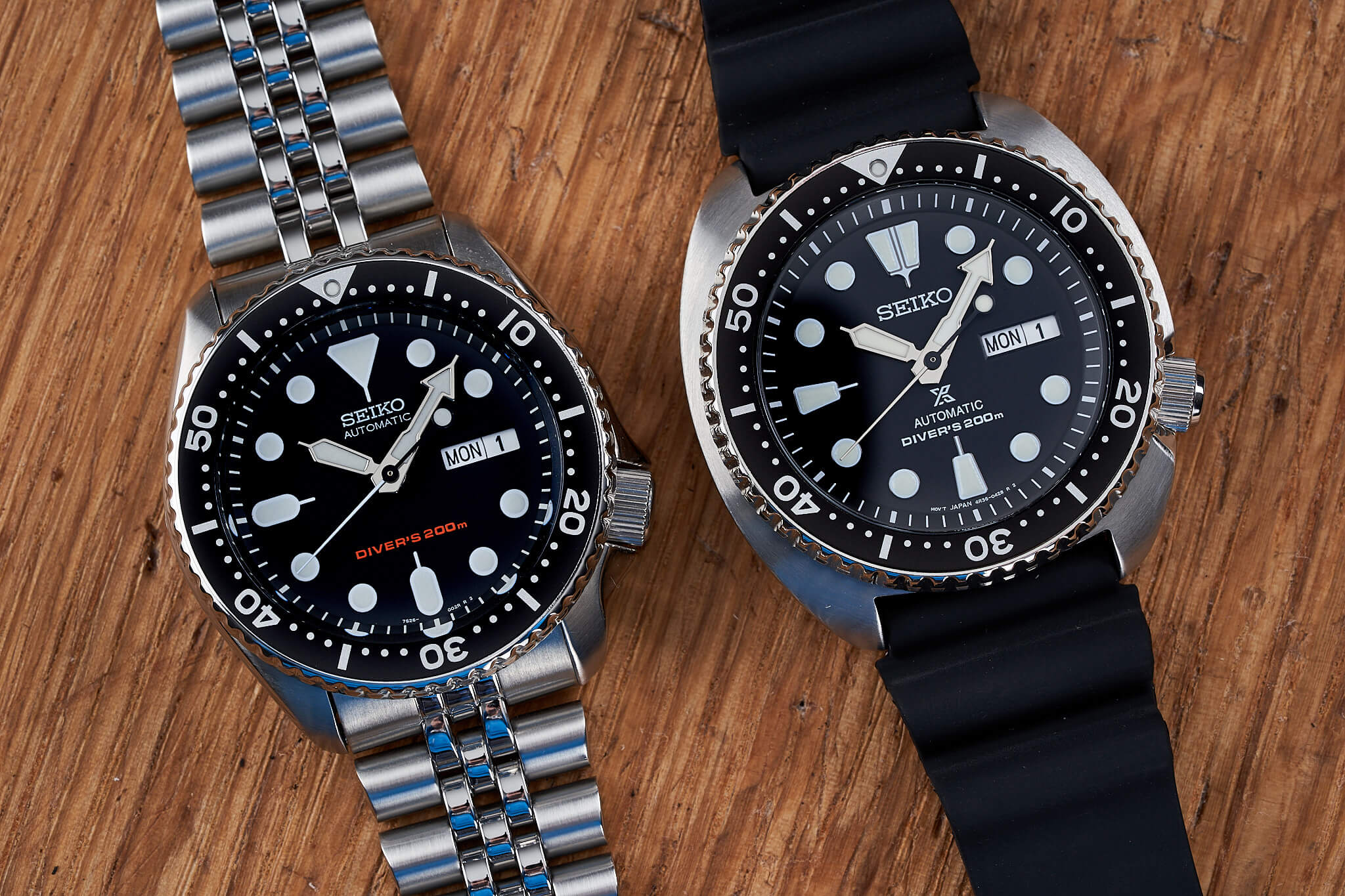 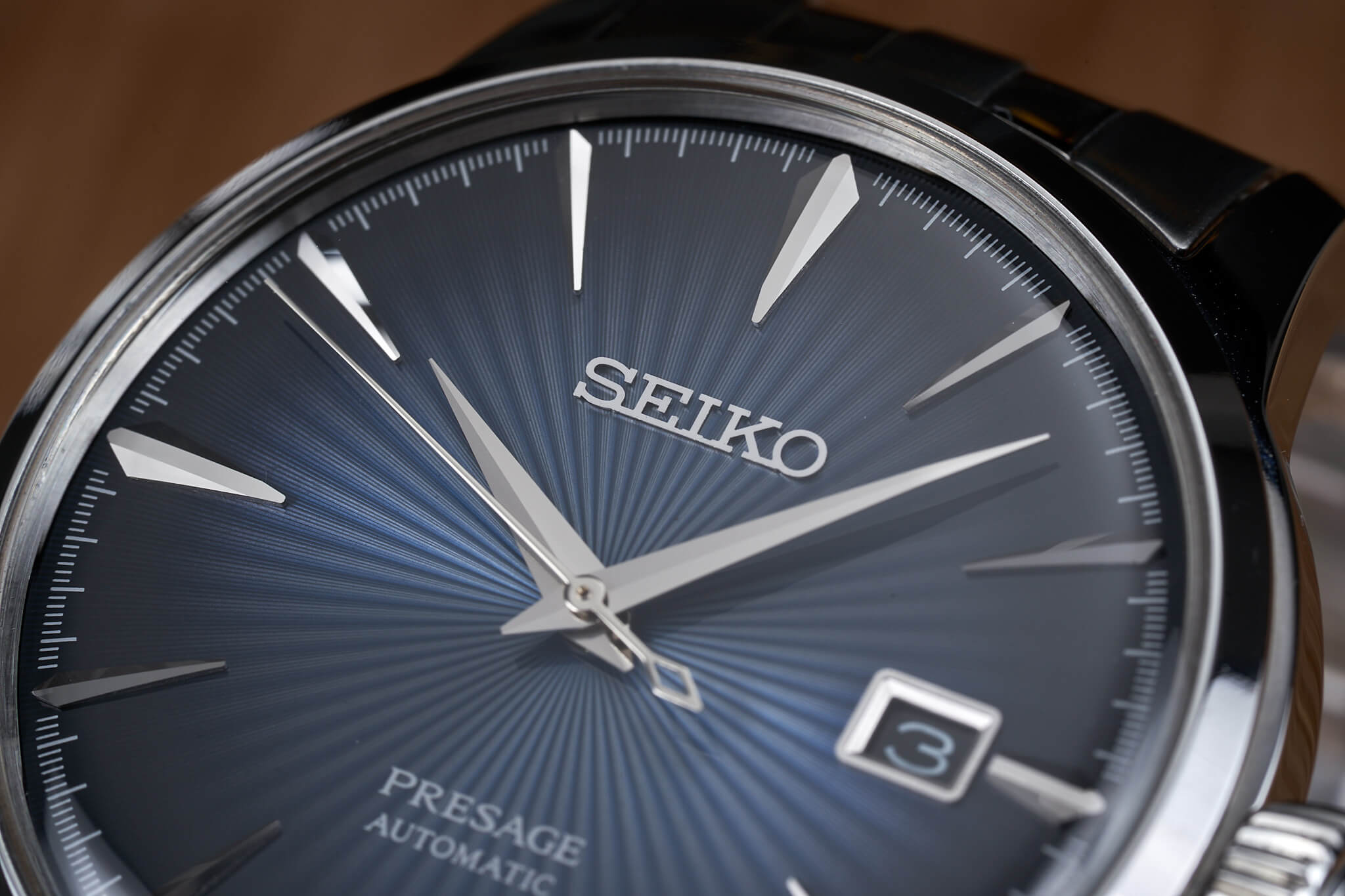