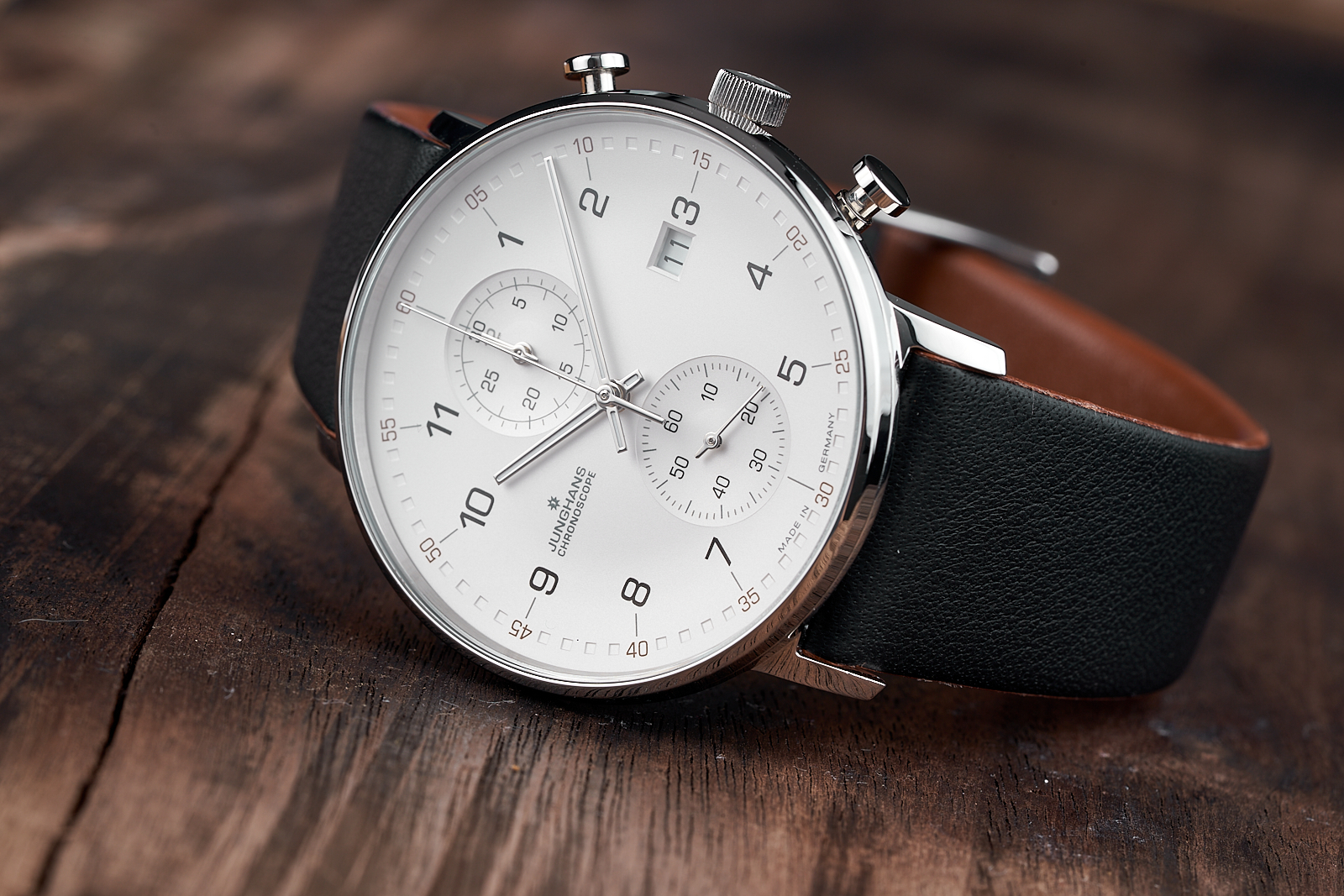 Junghans is widely known for their Max Bill-designed watches. The classic and simple designs are watch community fan favorites (as well as mine). However, they have begun to branch out from the Max Bill watches with a new line of quartz chronographs called the Junghans Form C.

The collection is a modern take on the classic Max Bill design and while it feels familiar on the surface, the Form series has tons of hidden details and design elements that make it fresh with a soul of its own. The range encompasses everything from three-hand automatics to quartz chronographs, like the Form C that I will be looking at here. 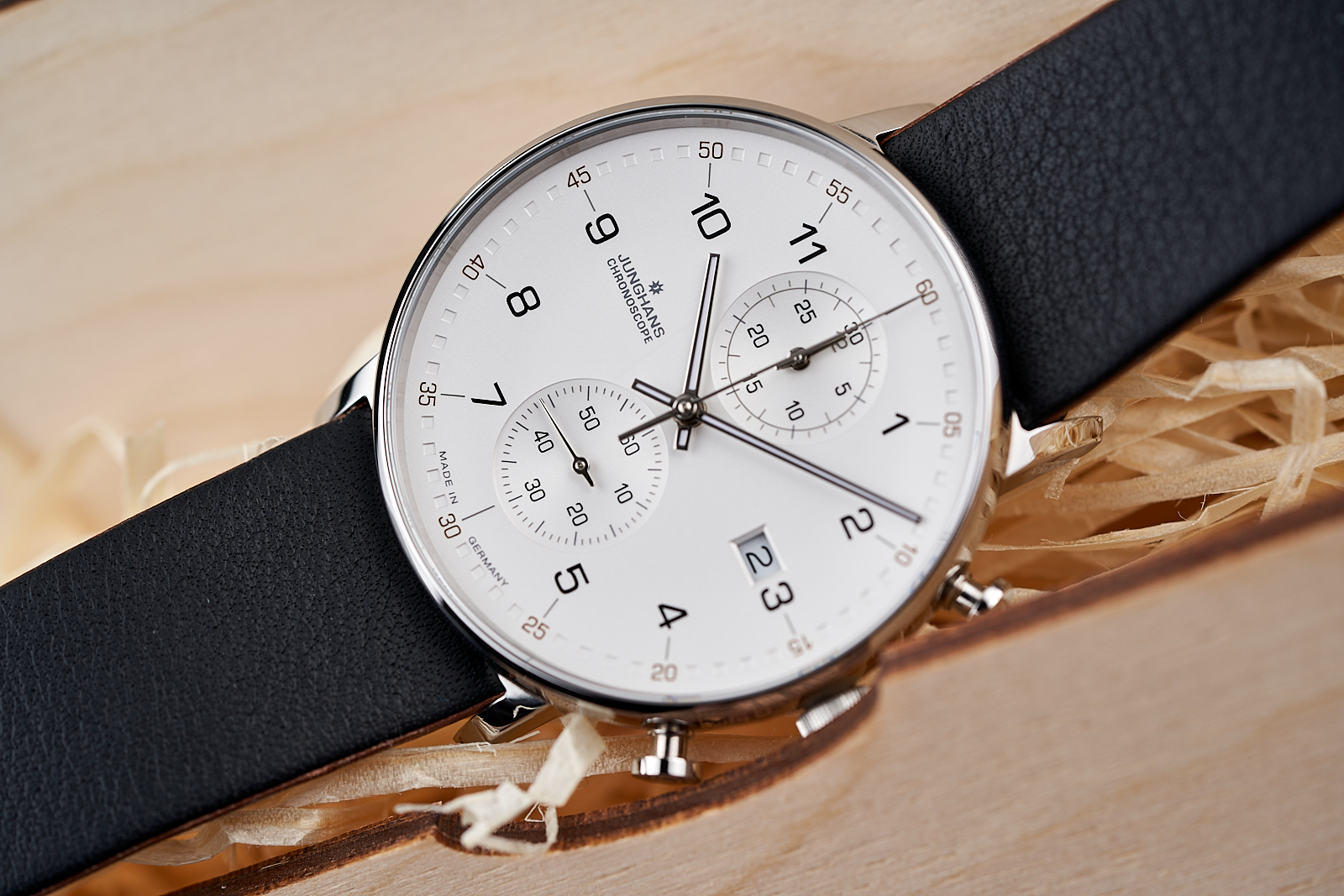 In keeping with the spirit of the Max Bill, the Form C feels wonderful on the wrist. There are a few elements playing into why the Form C feels great. Junghans designed the case to slope inward from the midcase as it meets the wrist. The contact surface is roughly 30% smaller than the diameter of the case. The Form C isn’t a big watch to begin with, so the smaller surface area results in a more comfortable watch. 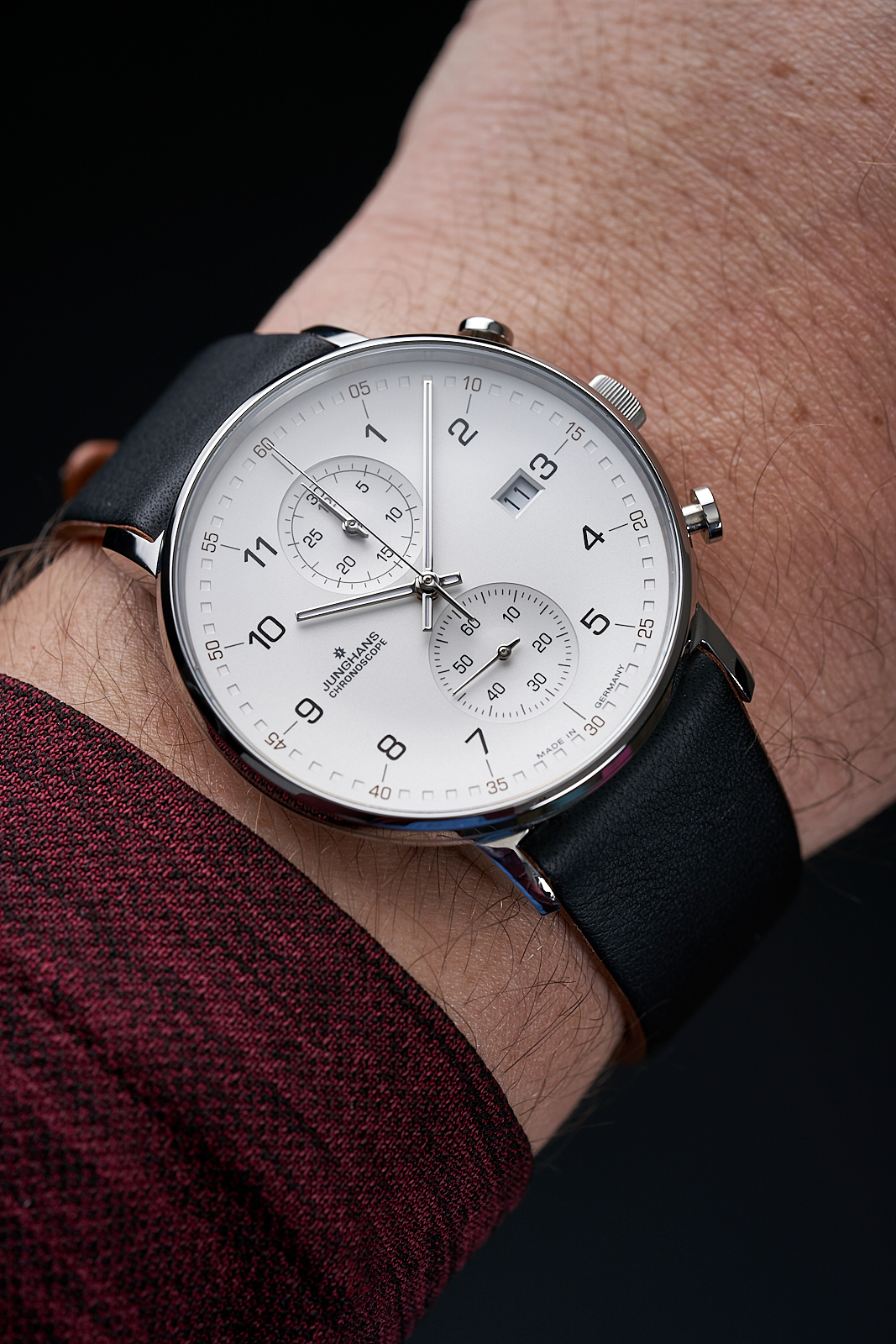 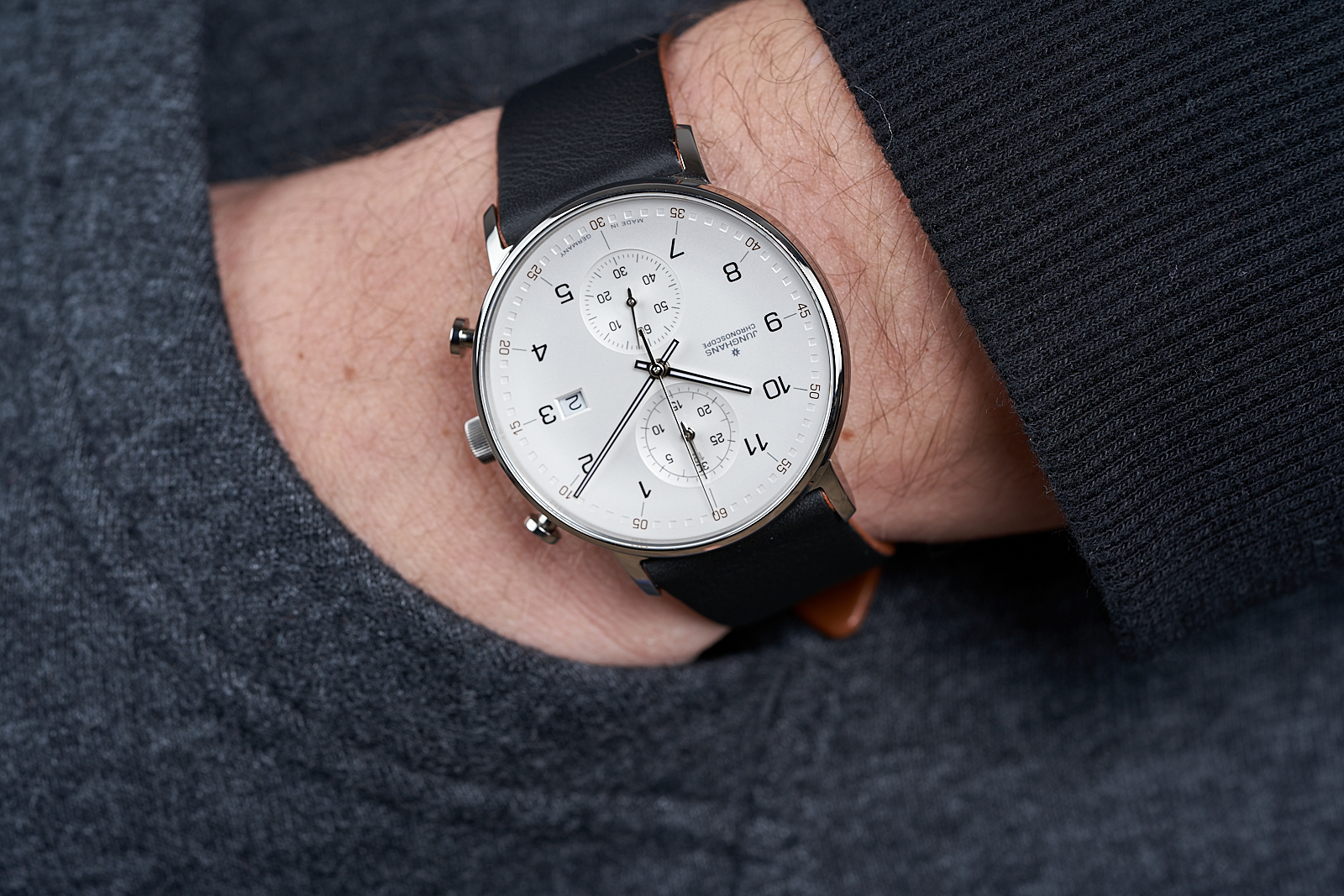 I was initially concerned about readability with the Form C. White-dial watches can often be difficult to read when they have polished hands. The Form C’s design alleviates this problem with its concave dial. Because the hands are never flat against the dial, there is a slight shadow underneath the hands which makes it easy to read. The thin strip of lume down the center of each hand also creates contrast between the edges of the hands and the dial, enhancing readability further. 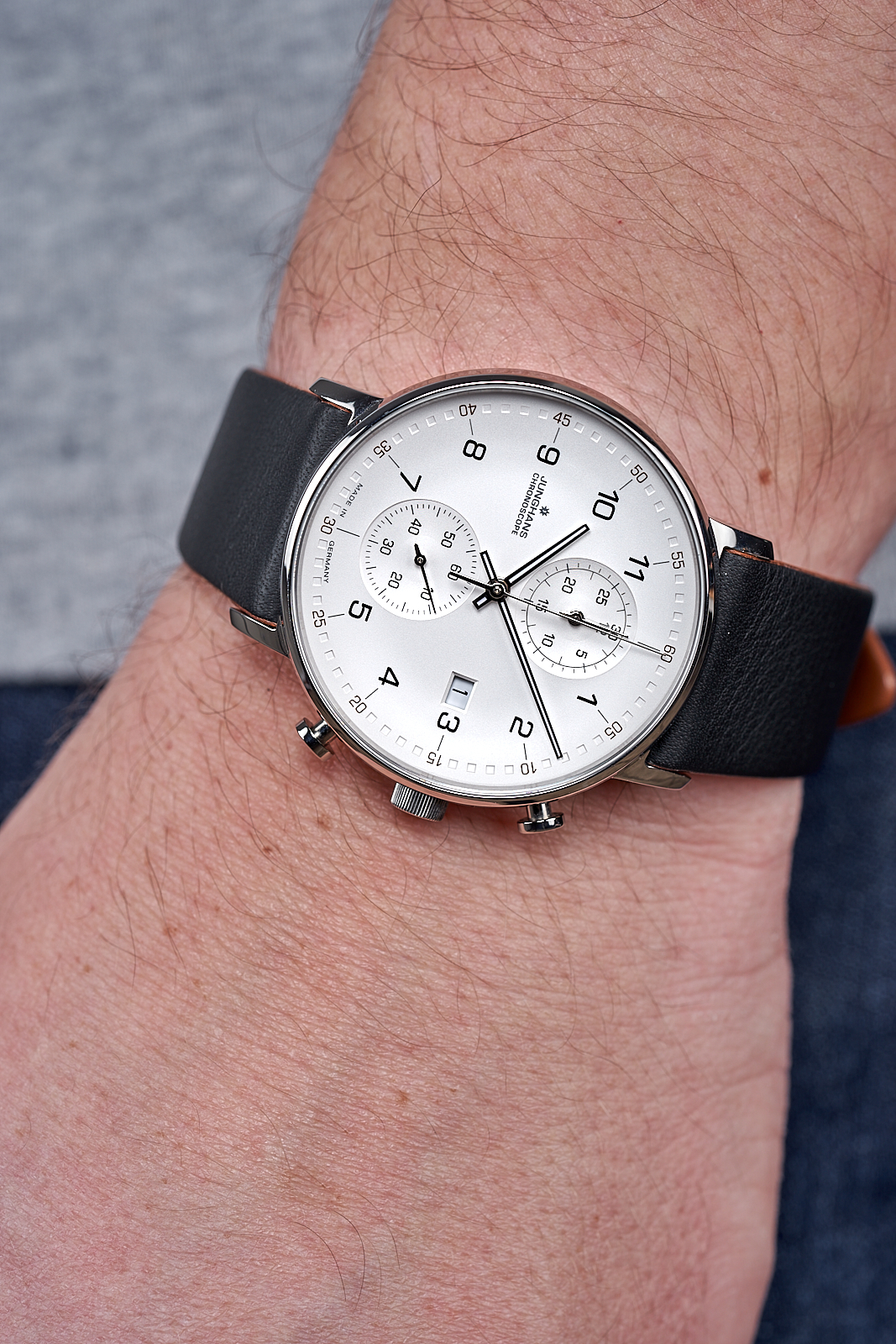 The pushers on the Form C are relatively long and while they did not dig into my wrist, I could see how they might become a problem for some wearers. The shape of the pushers lends themselves to easily being caught on things which could potentially damage them. I don’t see this as a huge concern but those who might want to wear this watch in more high-impact activities might want to reconsider. 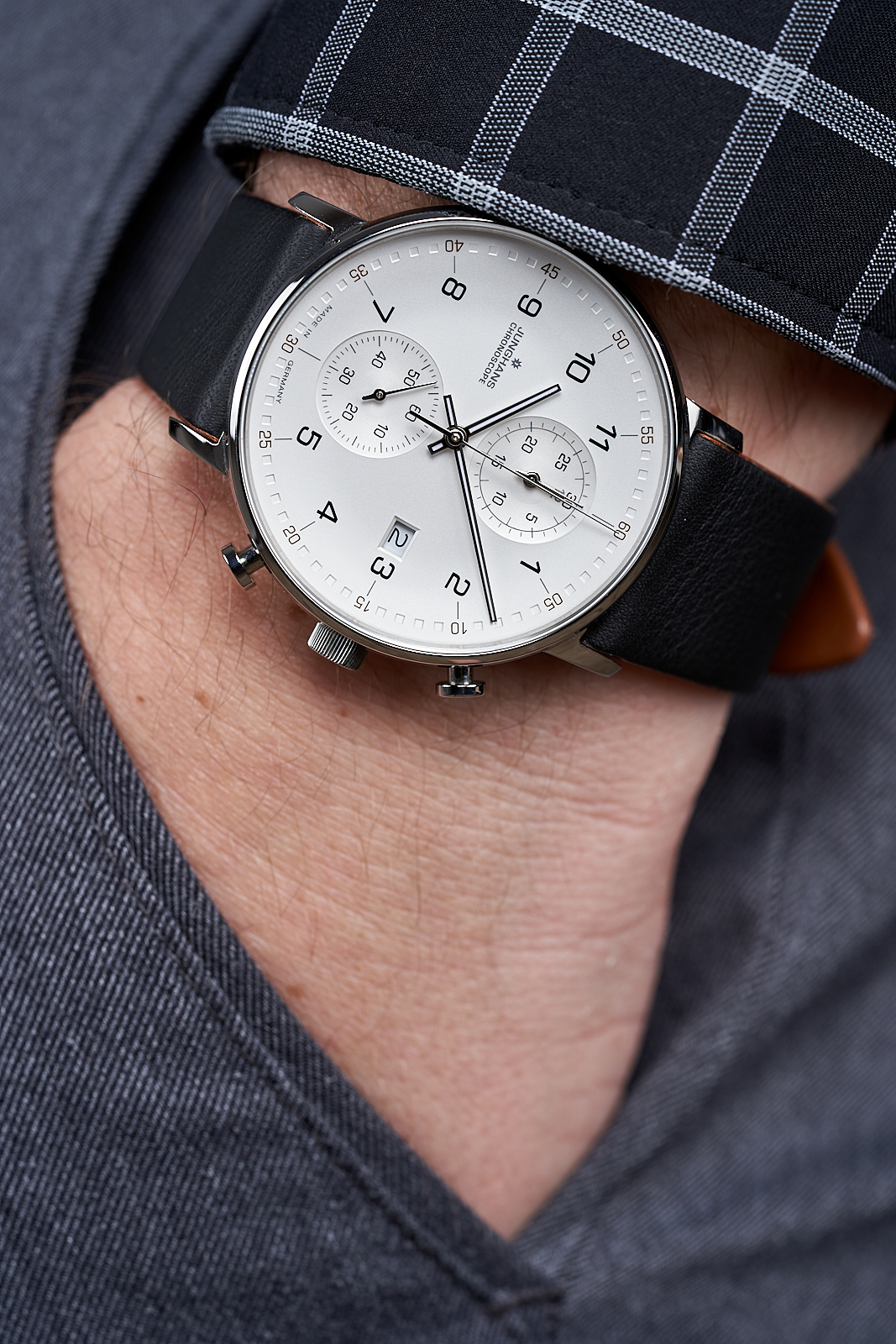 The dial is where the Form C shines and Junghans made sure it was front and center. There is essentially no bezel on the Form C, so the dial takes up nearly the entire 40mm diameter of the watch. Despite this, it doesn’t feel large; there are multiple elements that help break up the dial of the watch and bring its perceived size down. 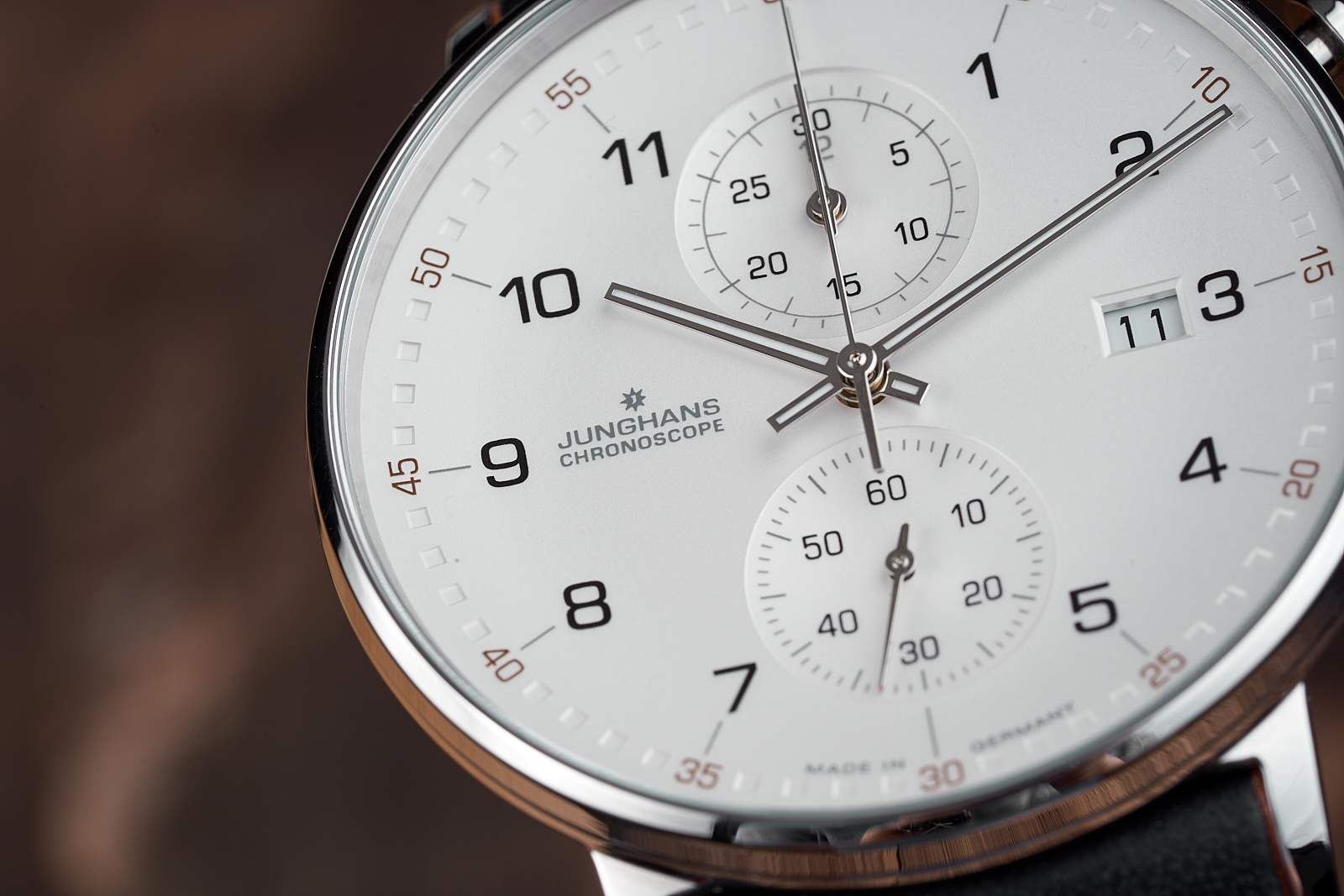 It’s difficult to gauge in pictures, but the concave shape of the dial is truly beautiful. The downward slope of the dial gives a depth to the watch that is unlike any other watch I’ve worn before. It is further enhanced by the two subdials, also concave. 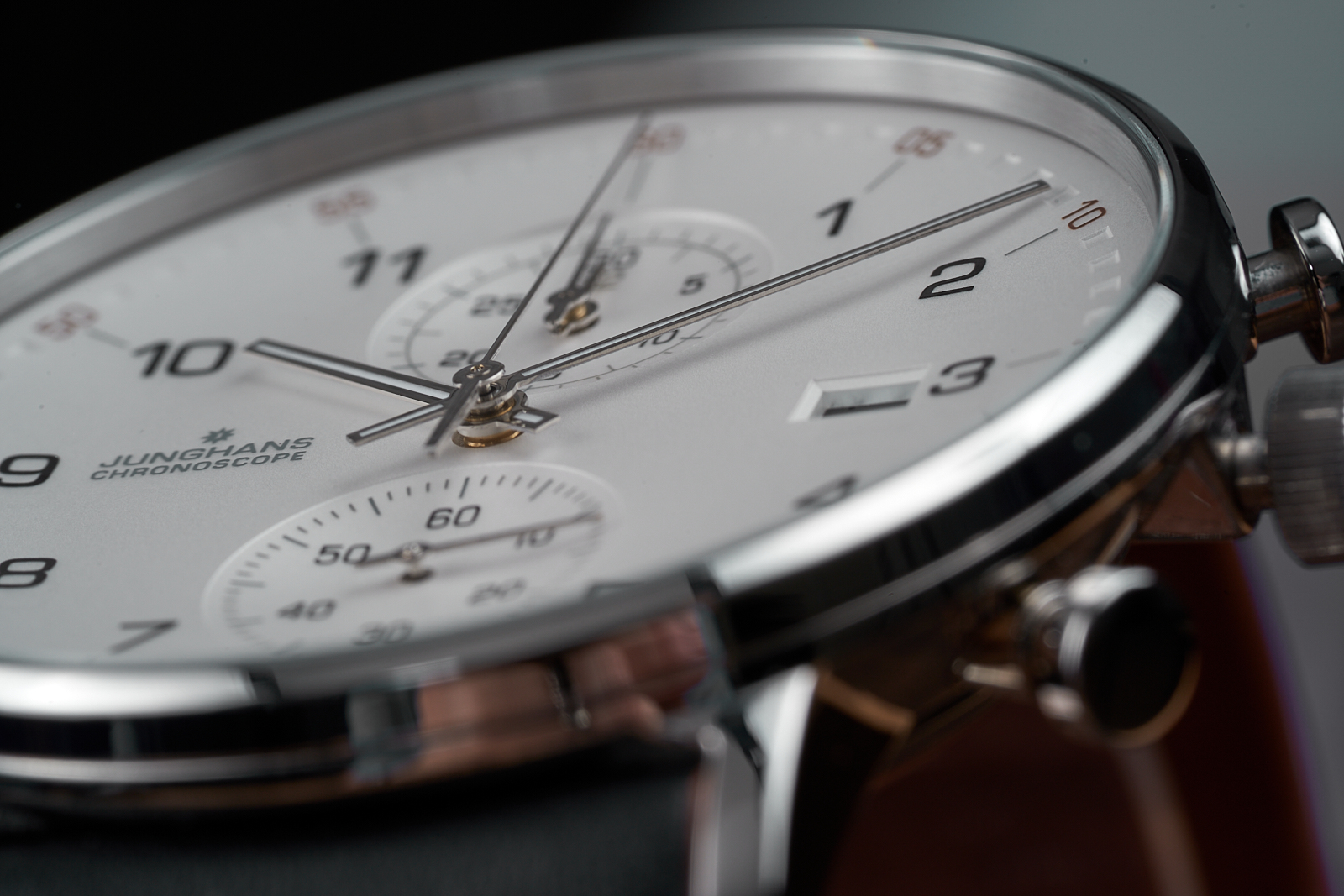 All the printing on the dial is clear and crisp. The numerals are easily legible as are the numerals on the subdials. Even the minute markings on the outer part of the dial, which are burgundy in color and blend in a little more with the dial, are legible at a glance. Junghans’ logo and Chronoscope (their term for chronograph) are present at 9 o’clock.

I’ve often lamented quartz chronographs that use Seiko’s VK series and the useless 3rd subdial they all have which displays the time in a 24-hour scale. Junghans has gone the bicompax route with the Form C despite it having 3 hands between the two subdials. The bottom subdial contains a running seconds hand. The top subdial tracks minutes with one hand and hours with another, laid on top of each other. It’s a great way to execute the complication. 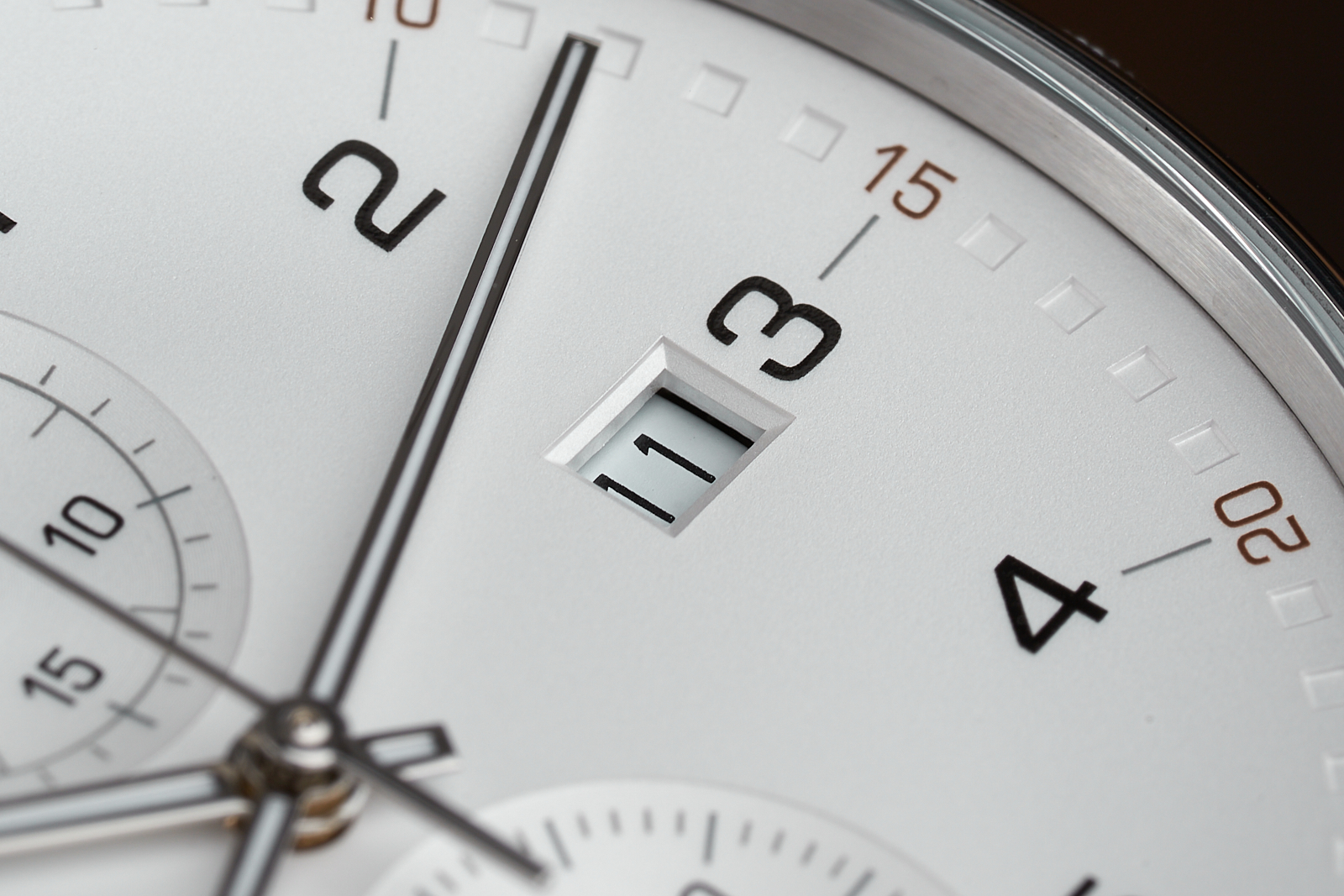 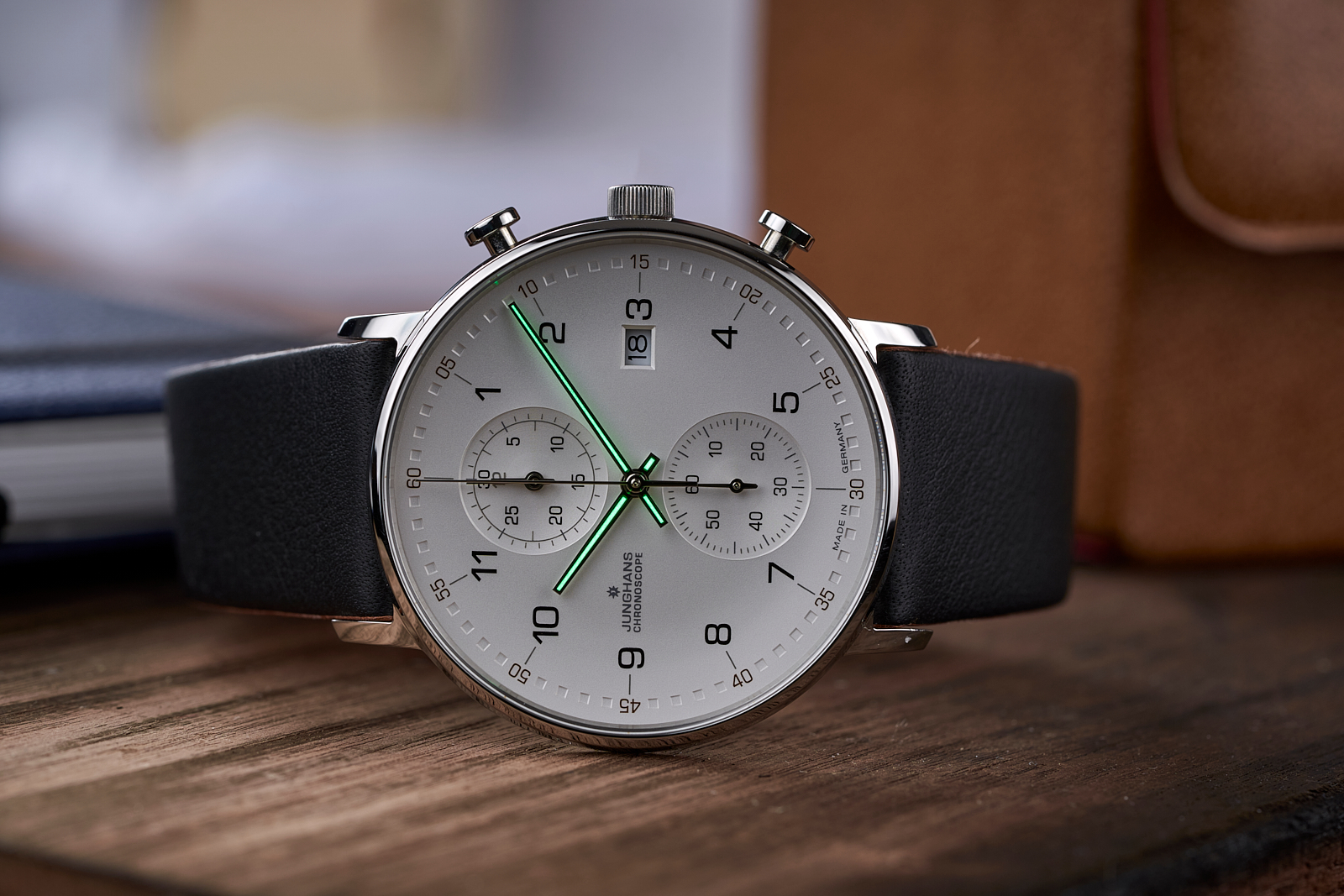 The case of the Form C lends itself well to being dressed up or down. It is entirely polished, and the polishing is well-done without any inconsistences. Combined with the white dial, the Form C almost looks monochromatic save for the burgundy minute numerals. 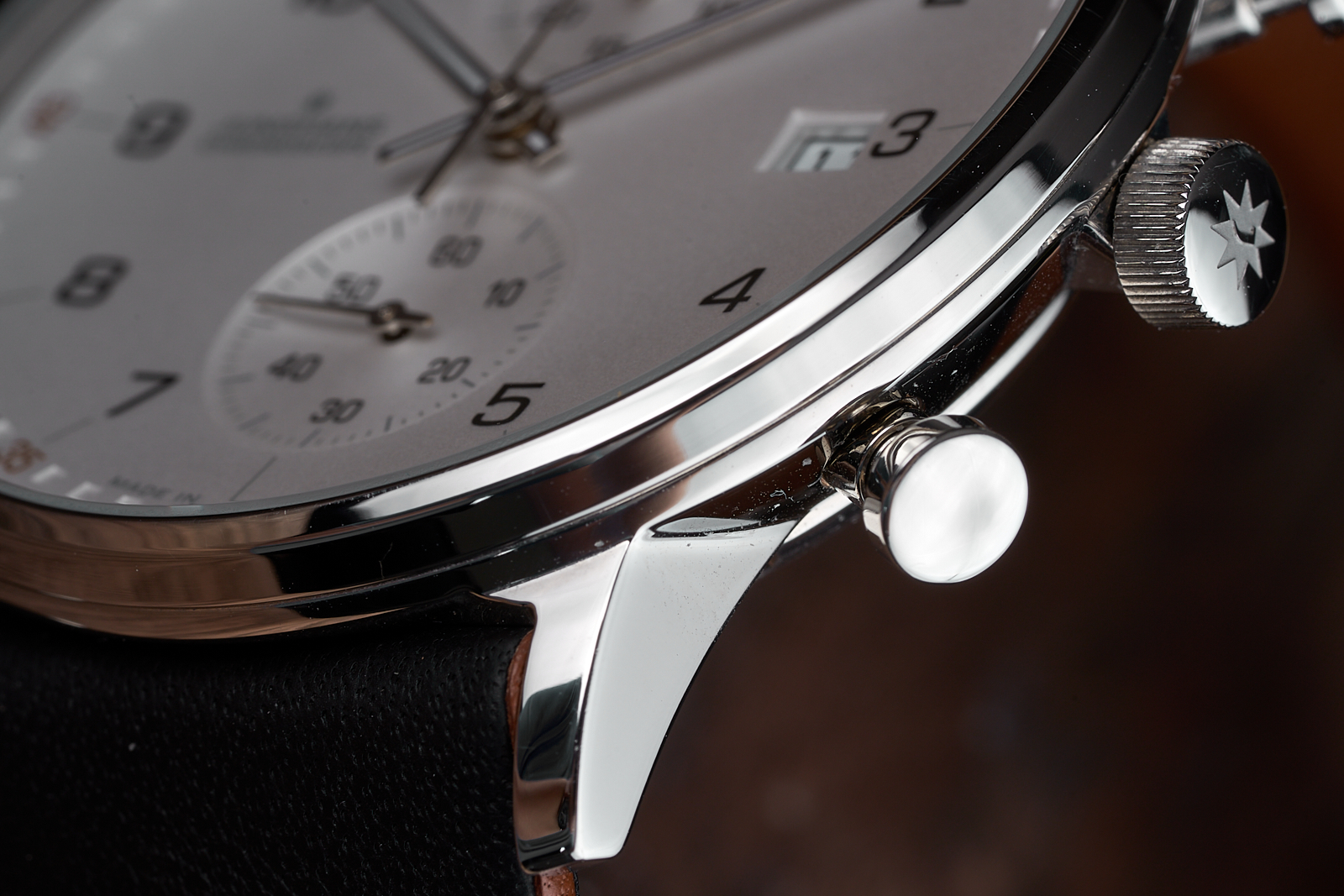 At only 10.5mm thick, a wonderful advantage of a quartz movement, the Form C doesn’t feel like a puck on the wrist despite the large dial size. It is comfortable for many reasons including the sloping design of the case I mentioned previously.

The leather strap included with the Form C pairs with the watch perfectly. It hugs the case closely, giving it an integrated look. One grievance I have with the Form C is the 21mm lug width. I see no reason why modern watches should have odd lug widths as it drastically limits strap options. Thankfully, many aftermarket options are available in odd lug widths, but it does limit what you can use in your current collection. 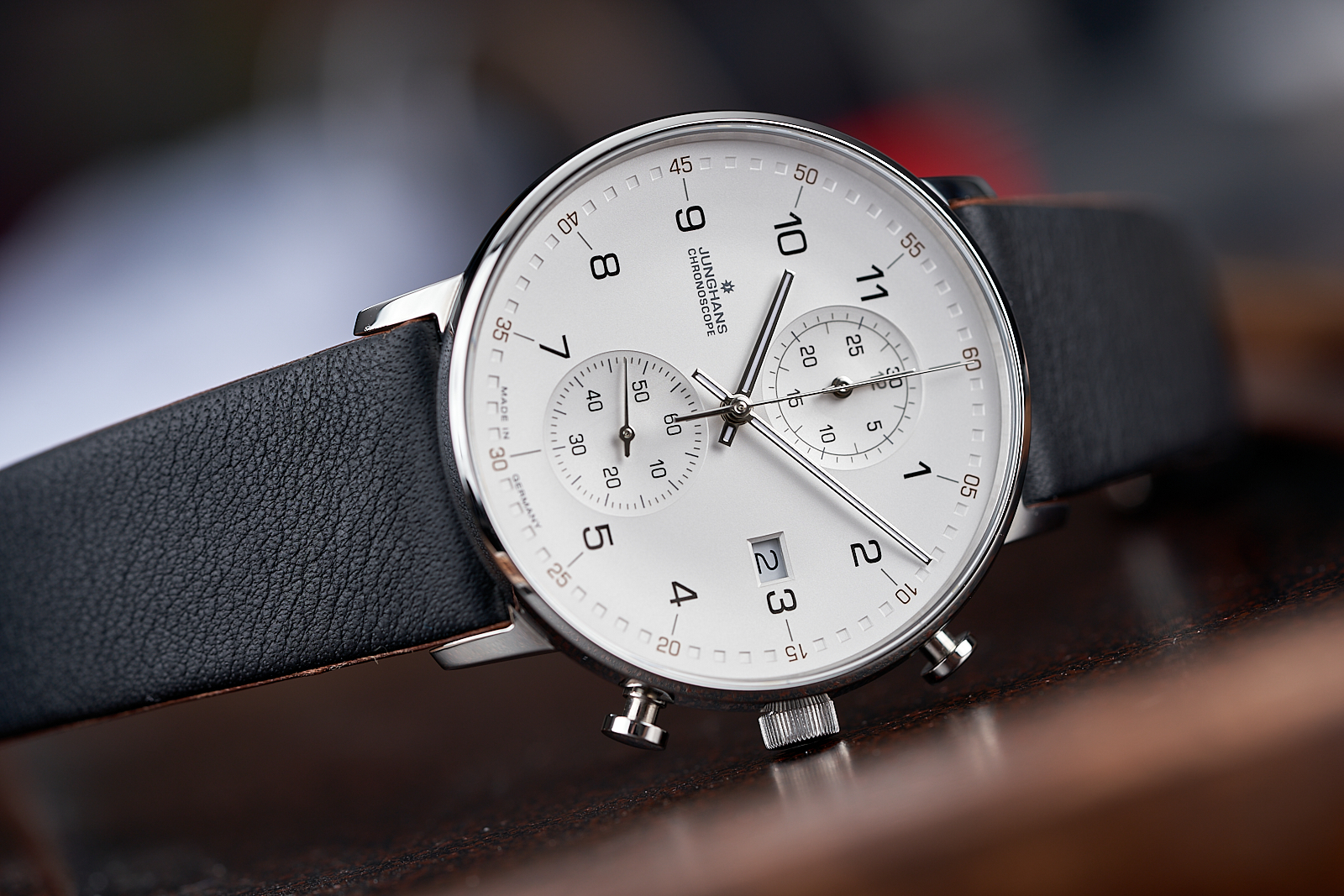 I’ve reviewed a multitude of quartz chronographs in the past year and I seem to like each one more than the last. The Form C is no exception, especially as it is one of the best-executed models I’ve tried. For trending on the dressier side, it feels surprisingly solid in its build quality and equally as versatile.

I’m not a movement snob by any means but just for the sake of competition and forcing more innovation in the space, I’d like to see a brand like Junghans bring out a mecha-quartz movement. They already have the design chops to create a beautiful watch and bringing a new movement to the space would no doubt make the quartz chronograph fans go wild.

With that said, the movement in the Form C doesn’t take away from what a well-designed, comfortable, and beautiful watch it is. A grab-and-go quartz watch is fantastic to have and I found myself reaching for the Form C time and time again.

Check out more Junghans reviews from The Watch Clicker 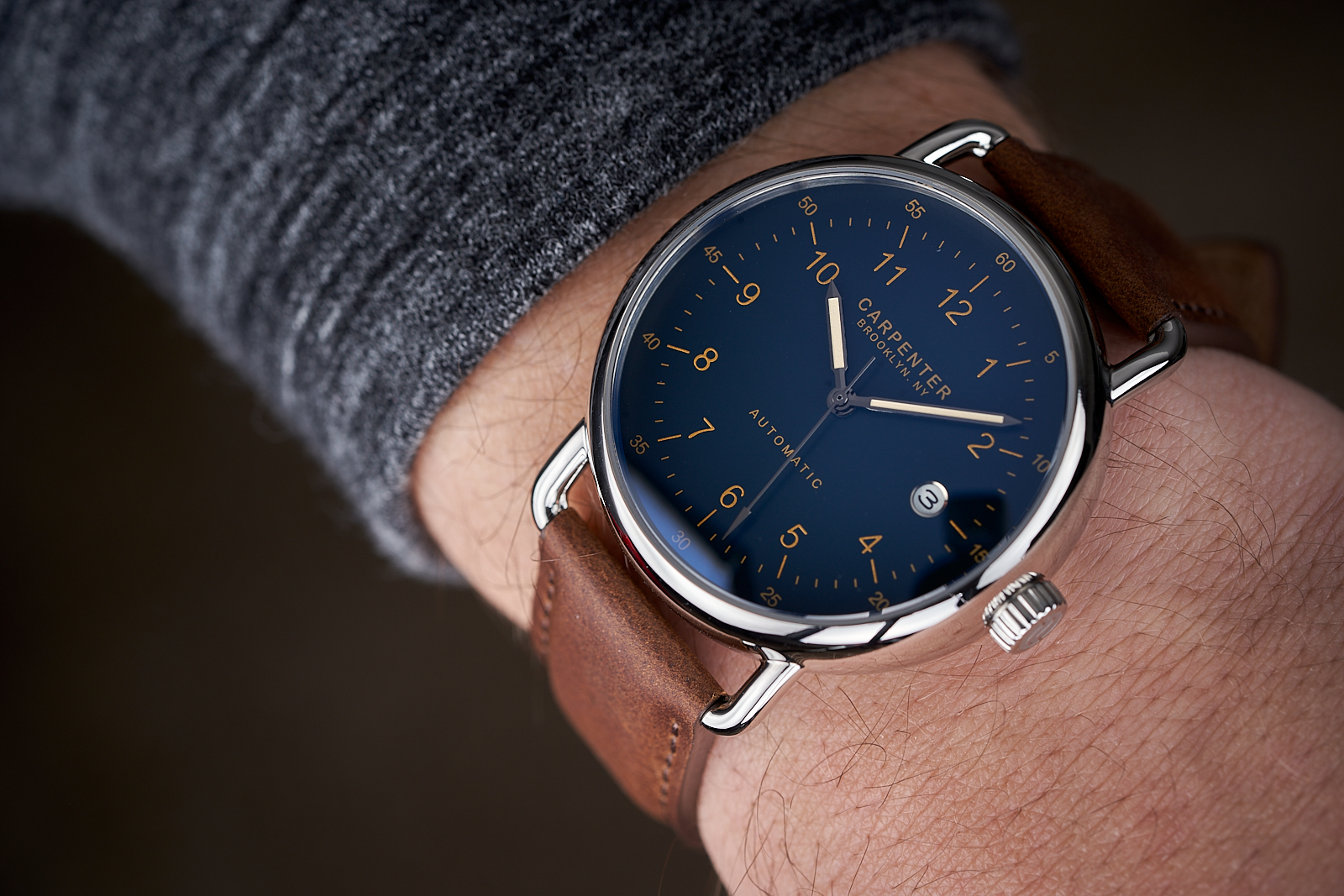 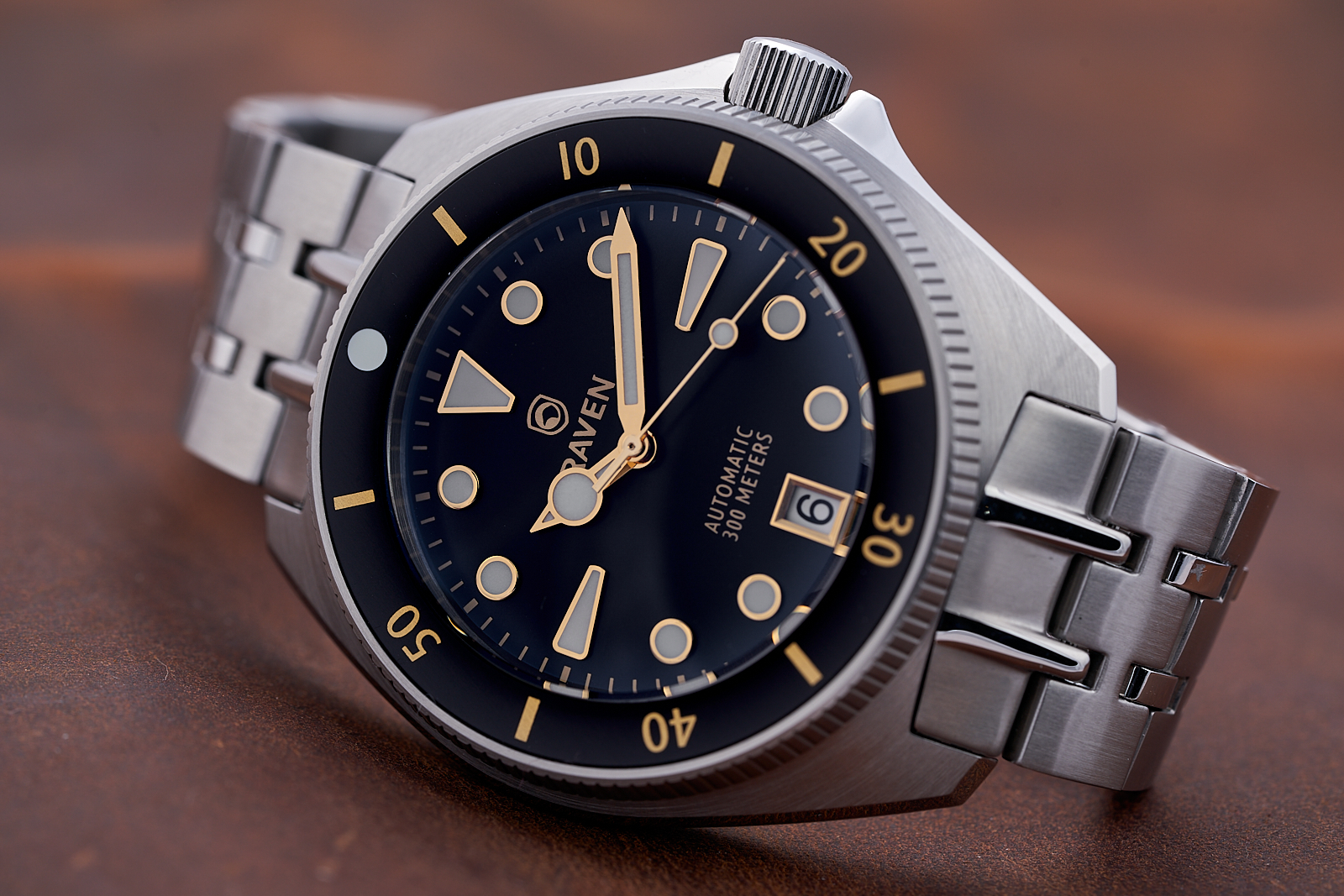