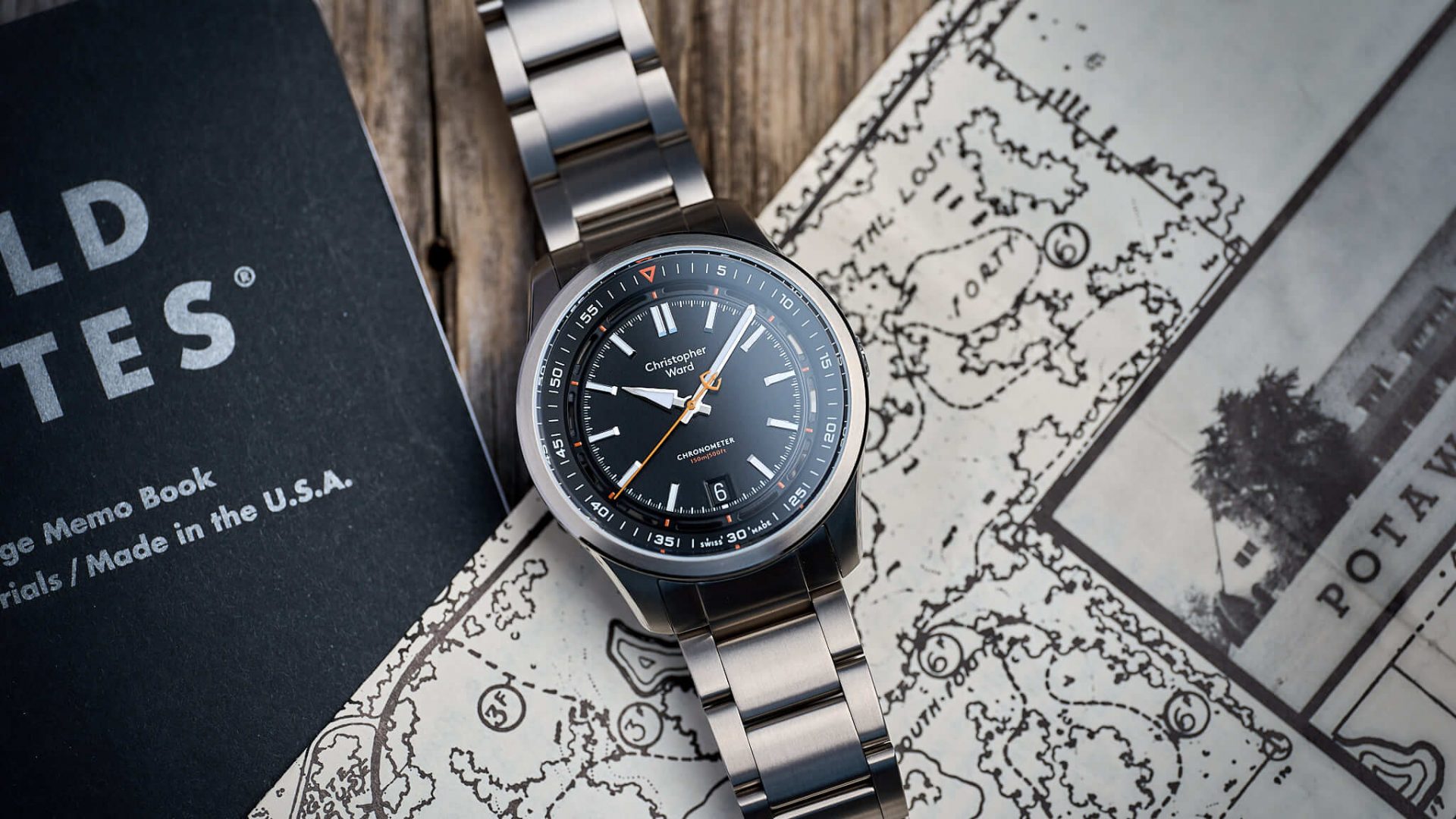 Earlier this year, Christopher Ward introduced a new line, the C63. The line is comprised of 3 different watches in multiple variations that share a similar case but have different complications and materials. The goal, as Christopher Ward CEO Mike France discussed on a recent episode of 40&20, was to create a line of watches at multiple price points to accommodate a variety of budgets. Today we’re looking at what is at the top of that line, the titanium-cased C63 Sealander Elite.

Christopher Ward also did a great job in giving the titanium case some flash. A lot of titanium watches can look rather spartan because polishing and chamfers are not usually applied to them. The Sealander Elite looks like a traditional stainless steel watch at a glance.

Perhaps the most interesting part of the Sealander Elite, especially in terms of wearability, is the crown (or lack thereof). The crown retracts into the case, creating a perfectly symmetrical case. It is a bit odd when you first look at it because we’re so used to seeing modern watches with crowns on the sides of the case. Using the crown is simple enough: a push releases it so the time and date can be set. Winding the watch is accomplished the same way as a traditional crown once the crown is out. Christopher Ward did a good job designing the thin crown so it is usable and still able to seat into the case and out of view. There is enough bite on the knurling of the crown to use it easily.

If you’re familiar with Christopher Ward’s Lightcatcher cases there won’t be many surprises on the C63. The case wears just as well as the C60 and C65 cases from Chris Ward. The C65 is still my favorite case on the wrist because of its thinness but the C63 is a close runner-up. While none of the cases in the C6x family are thick by any means, the C63 falls in the middle of the family. It isn’t super-thin on the wrist nor does it pop out too much. The Sealander Elite stands 10.7mm tall but comes in a wrist-to-crystal measurement of 9.5mm. It is just what you want from a modern tool watch.

The dial of the Sealander Elite was honestly a little confusing to me when I first saw it, partly because of the role I thought the retractable crown would play. The dial is made up of 3 main elements and is multilayered. The inner part of the dial is traditional; it contains the dial text, date window, and the markers and hands. There is a small step down before the chapter ring that has orange accents which line up with the markers. The chapter ring is what confused me.

I was sure the Sealander Elite was meant to be a dive watch and that it featured an internal rotating bezel. It sure looks that way when you first look at the watch. However, the outer part of the dial is simply a chapter ring and has minute markings every 5 minutes. I feel this is a missed opportunity by Christopher Ward to use the retractable crown in a way that would allow it to rotate an internal bezel. I’m not sure if this is something they have planned for a future version but I know I’m not alone in this thinking as I had several people ask me the same question I had about the chapter ring.

The rest of the dial is pure Christopher Ward. They have carried over the handset from the Trident series (one that I love, even though our Senior Writer Mike does not). I’m happy to see Christopher Ward embracing their name at 12 o’clock again. While it is more traditional than the 9 o’clock placement they had been doing, it does look better, especially on tool watches. Chronometer and the water resistance rating are at 6 o’clock, above the date window. That’s right, the Sealander Elite is chronometer certified. Christopher Ward has been putting out chronometer watches for a few years and are keeping them conservatively priced for what you’re getting in that regard.

As I discussed above, the Sealander Elite is using the new C63 Lightcatcher case and while there aren’t a lot of surprises here, I must say, if it ain’t broke don’t fix it. The Lightcatcher case is still one of my favorite cases and for good reason. The lines are clean, simple, and elegant. It strikes a perfect balance of bling and sport that you want in a contemporary tool watch.

The titanium case is Grade 2 titanium, which is one of the most common grades of titanium you will see on affordable titanium watches. Grade 5 titanium is stronger than Grade 2, but of course is more expensive. Grade 2 titanium is said to scratch more easily than stainless steel-cased watches, but it is also easier to correct a blemish on than stainless steel. I’ve used a pencil eraser on my Tudor Pelagos to remove a blemish. No idea why it works, but it does.

The bracelet on the Sealander Elite is also carried over from the C6x series watches and this is where I think Christopher Ward is starting to fall behind. The bracelet is excellent; it is comfortable and features the quick-release and quick-microadjust system they have had for years. That isn’t the issue. The bracelet tapers from 20mm at the watch head to 18mm where it meets the clasp. The clasp is almost 20mm so the taper is effectively 0mm. I’d like to see Christopher Ward use a more aggressive taper on the bracelets and adjust their clasps to align with that taper. A Christopher Ward bracelet with a 20mm to 16mm taper and a 16mm clasp would be downright awesome. Mike France, if you’re reading this, make it happen. You can thank me later.

Christopher Ward has been making some great innovations in affordable watches for a number of years. From their bracelet technology to retractable crowns in watches like the Sealander Elite, they are showing that new tech doesn’t have to wait for GPHG (or cost a fortune). The C63 brings these innovations closer and closer to the “everyman” watch and I’m all for it. If one of the Swiss watch giants produced a chronometer-certified titanium watch with a quick-release bracelet and a quick-adjust clasp, it would likely cost $5,000 or more. Christopher Ward is doing it for under $2,000.

I like that Christopher Ward is also paying attention to the variable budgets in the watch community. This watch costs $1,700, but if you like the looks of this and don’t have that budget, Christopher Ward has another watch in this class with the same look and bracelet technology for under $700. It is almost unheard of for a Swiss Made watch brand to offer that type of range. While there were a few things I’d like to see improved upon with the Sealander Elite, the watch is still a home run. Throw in that rotating bezel and a better bracelet taper and I’ll tell you, Christopher Ward, you’ll have a grand slam. 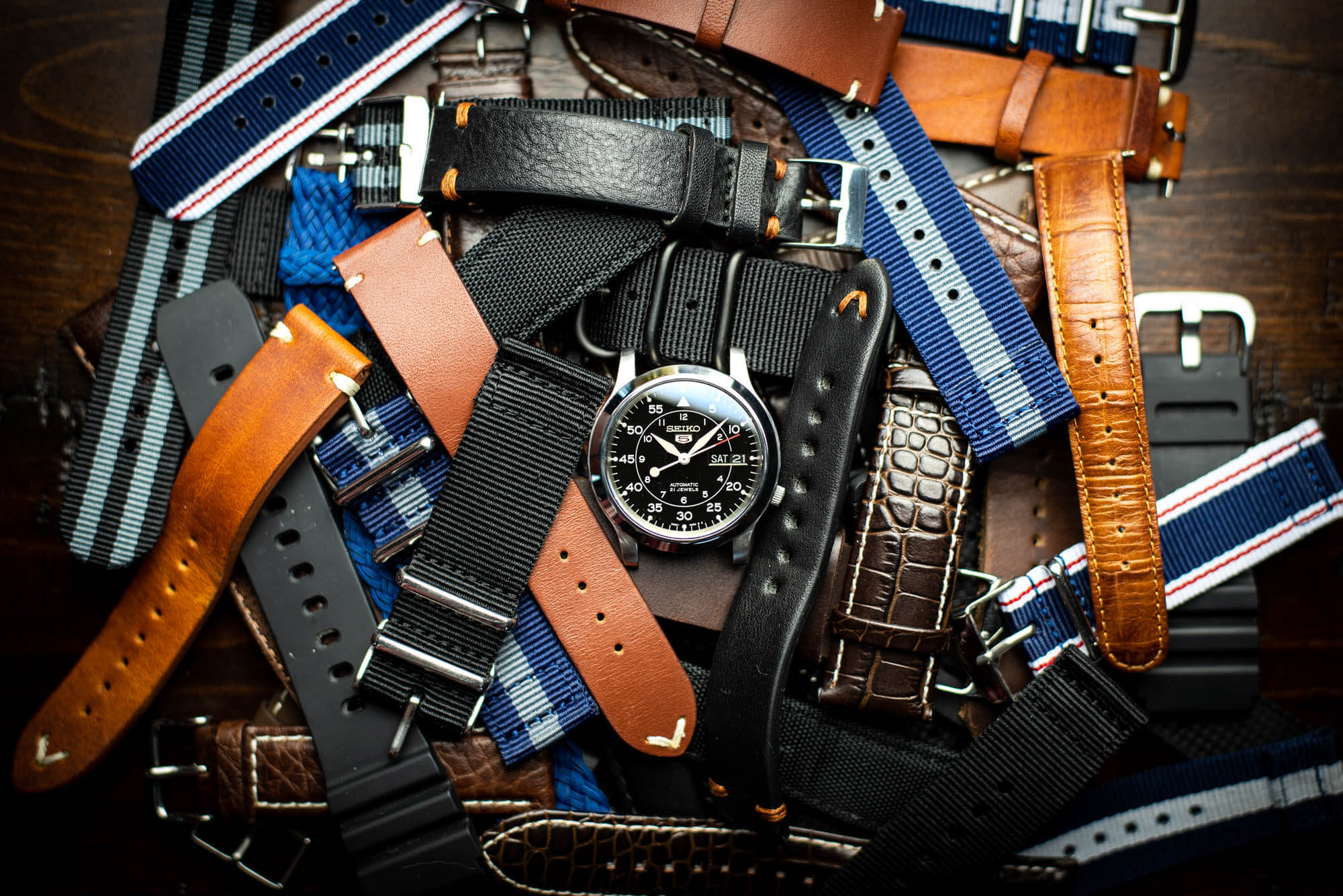