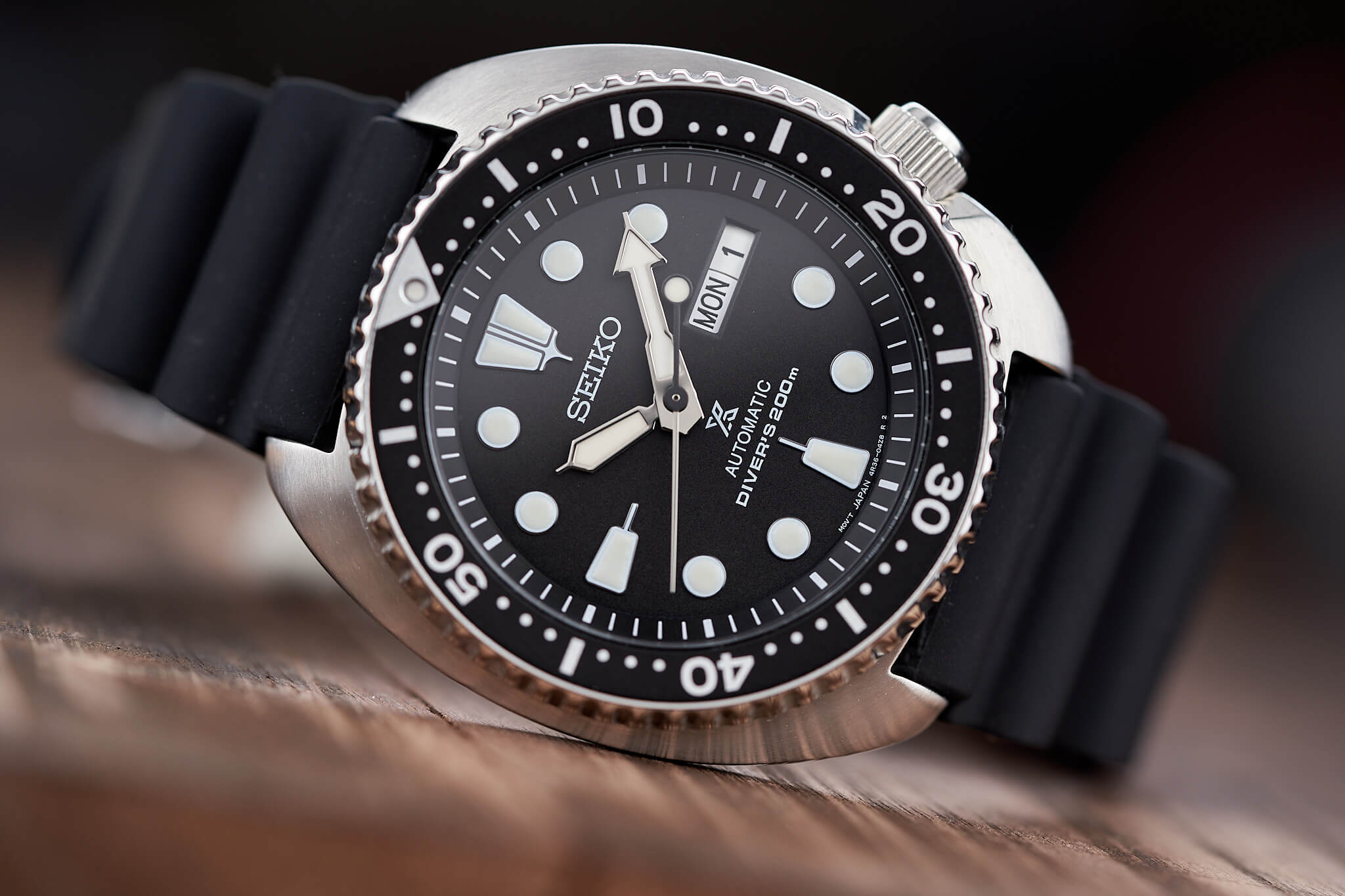 In the world of Seiko dive watches, the SKX is undoubtably the king of the hill. A tried-and-true classic that always comes up in recommendations for a dive watch no matter the age of the wearer or how deep his collection runs. Next on the list of recommendations is usually the Seiko Turtle. The Turtle is a modern reissue of the Seiko 6309, a collectable classic that is becoming harder and harder to find.

Taking most of what makes the SKX such a solid dive watch and building upon it, the Turtle is bound to live up the expectations the wearer might want in his dive watch. Easy to read, a solid bezel, bright and long-lasting lume, and dimensions that make it a great fit for most wrists, there is a lot to love about the Turtle on paper.

In this review, I take a deep dive into the Seiko Turtle as I would in any review, but I also compare it to its cousin the SKX as well as its younger brother, the Mini-Turtle. 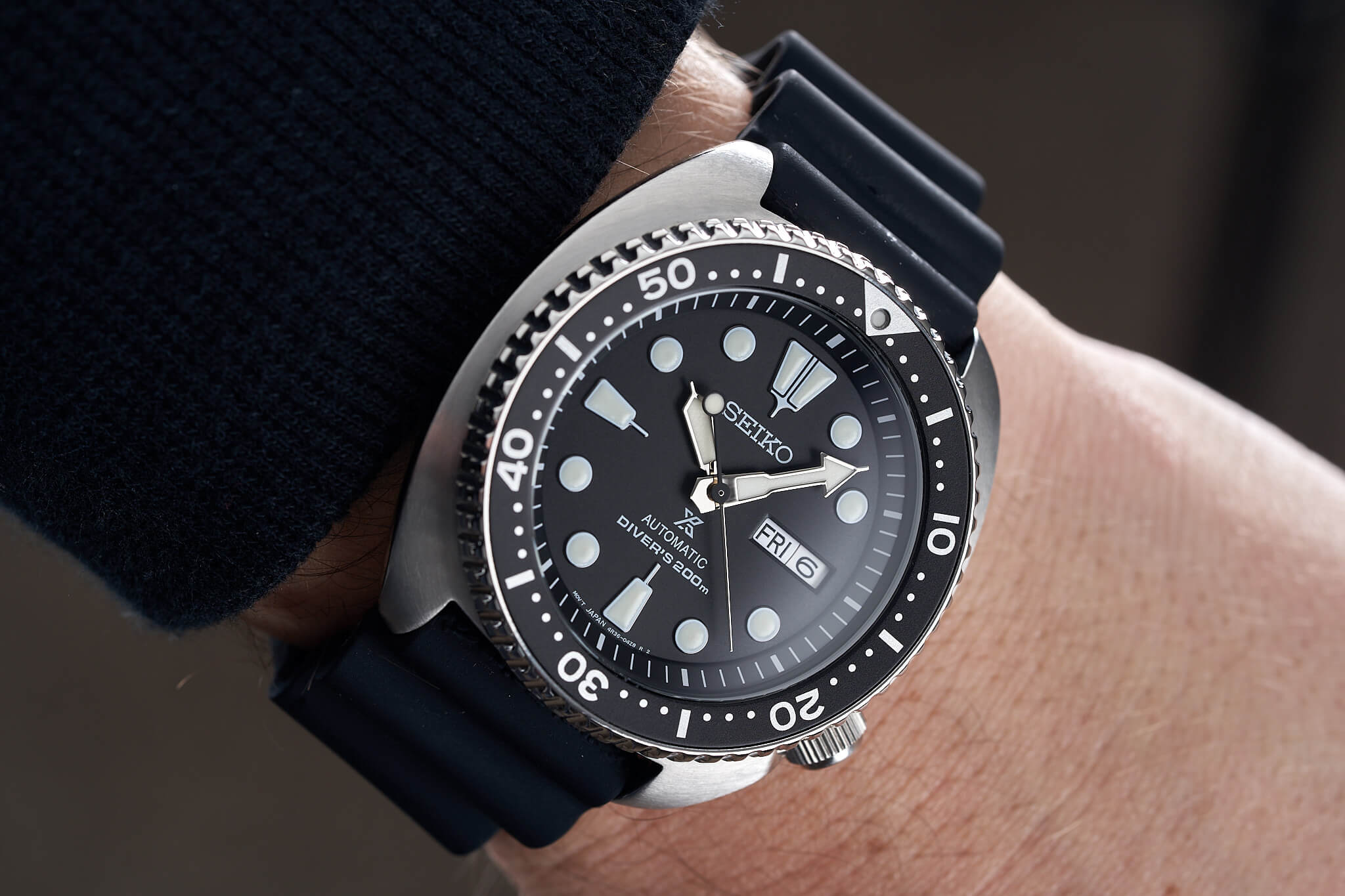 The Seiko Turtle has every right to be a big watch; purpose-built tool watches, especially dive watches, are supposed to be. They are designed to be readable at a glance and take a beating if necessary. On paper, the Turtle is a big watch. At almost 45mm wide, one would expect it to wear like a clock. This isn’t the case. Seiko are masters of deception when it comes to case dimensions and the Turtle is no exception. 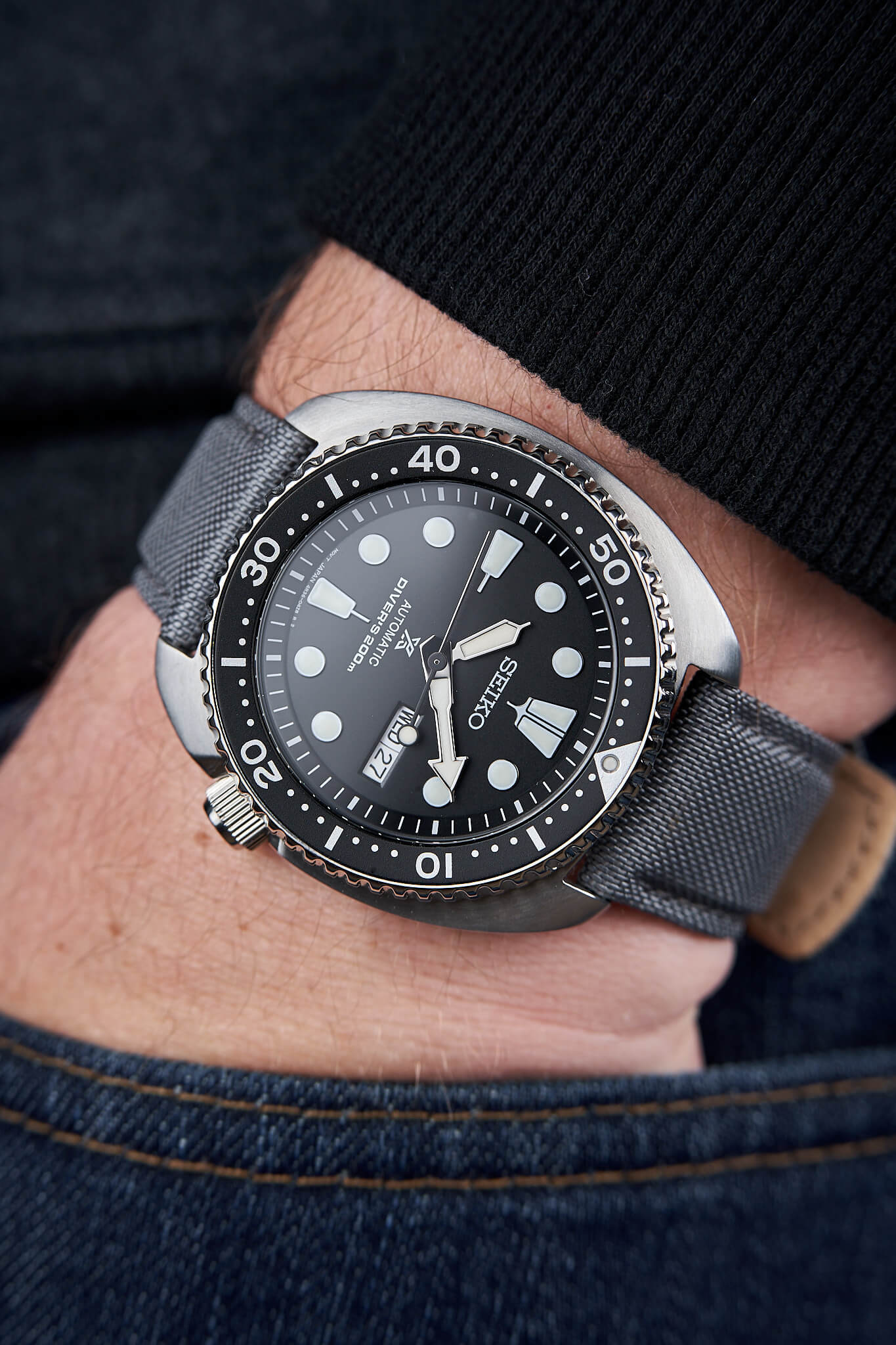 The case is almost completely round when you look at it straight on. The cushion-style case harkens back to its vintage roots and just plain looks like a watch you would expect to find on a professional diver. This roundness allows the Turtle to wear much smaller than its dimensions say.  The squat 48mm lug-to-lug distance, combined with a thickness slightly over 13mm, allows the Turtle to maintain a good wrist presence without overtaking the wearer’s entire arm.

Despite the 45mm diameter, the dial itself tells a different story. The dial is not much larger than the SKX’s dial, giving you a familiar feeling. The bezel is also like the SKX’s, right down to the bezel grip itself. Because of these two things being so similar in size to the SKX, the Turtle just doesn’t feel as big as it should. I’d argue that if any other brand made this watch, it would feel true to its 45mm size. That isn’t the case here. 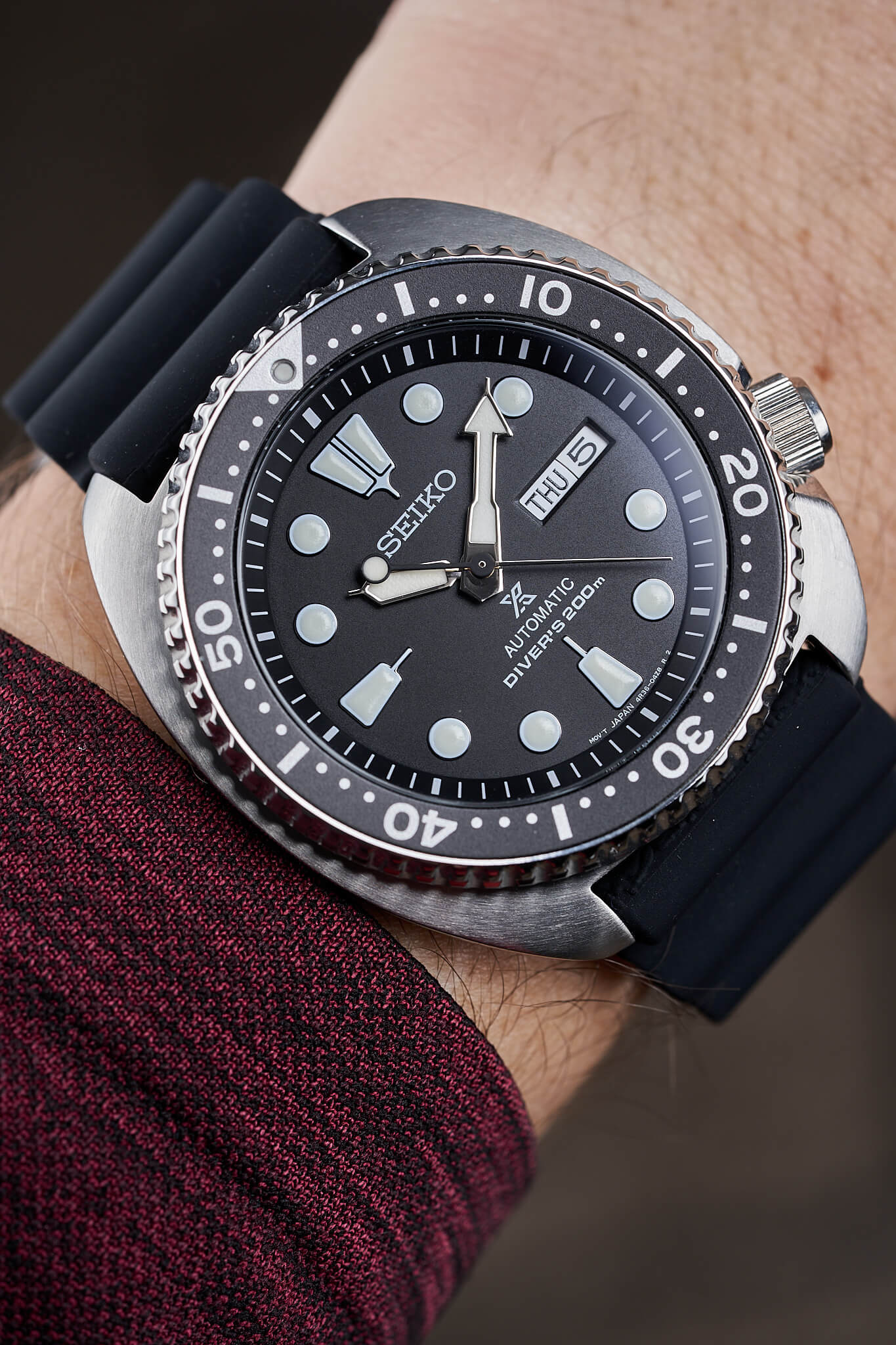 You also don’t get the impression that you’re wearing a large watch thanks to the undercut of the case. The dramatic cut-in takes a good chunk out of the case size of the watch as it nears the wrist, leaving the caseback to be the only thing contacting the wrist. If you don’t think this makes a difference, turn the Turtle upside down and feel the difference it would make if the bottom of the case were the diameter of the bezel. 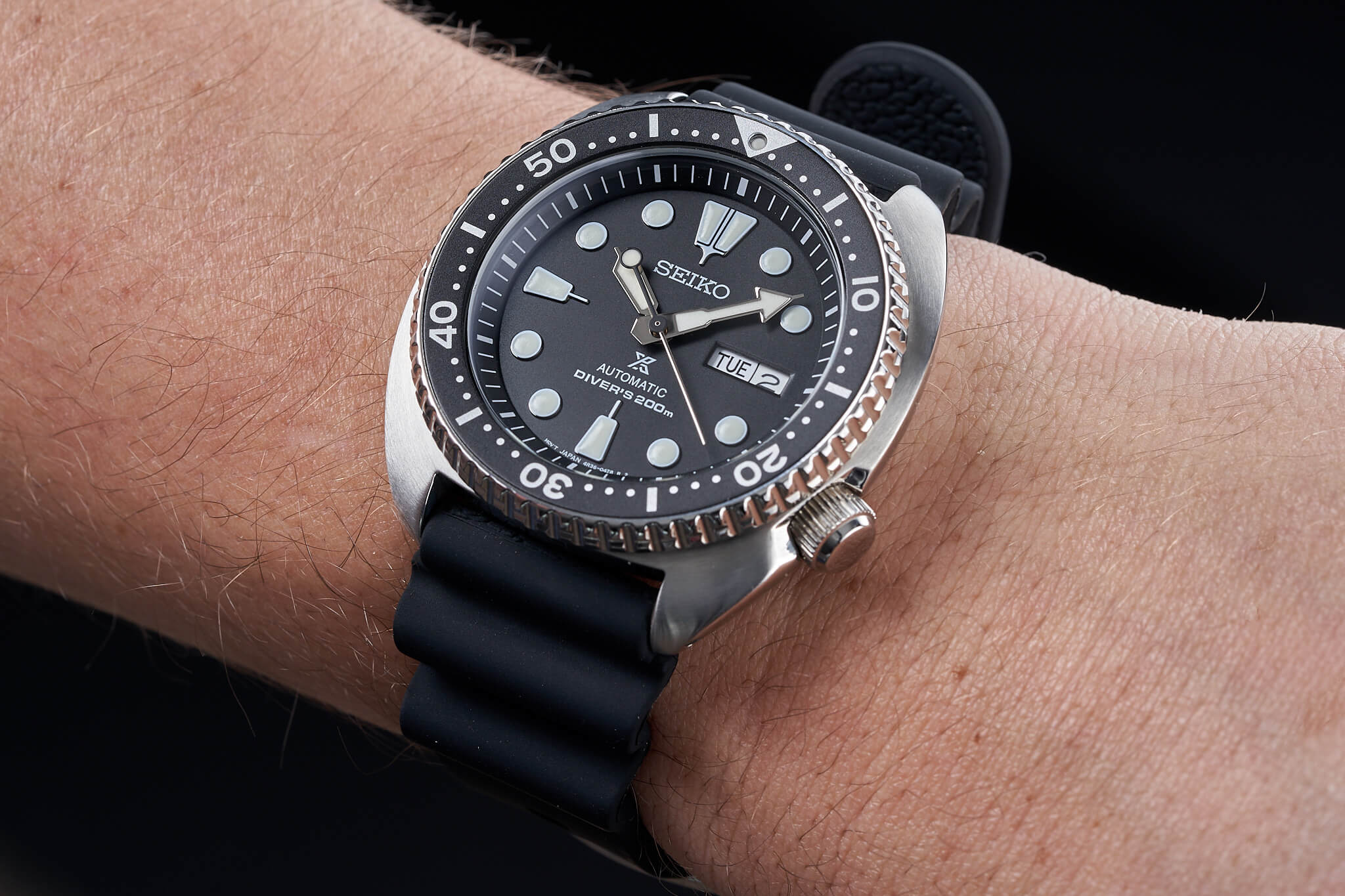 Readability is excellent with the Turtle and anyone familiar with the SKX feels right at home here. Sharing the same handset as the SKX but with a different dial layout, the Turtle has its own flair. The dial is more text-heavy thanks mainly to the Prospex logo at 6 o’clock. 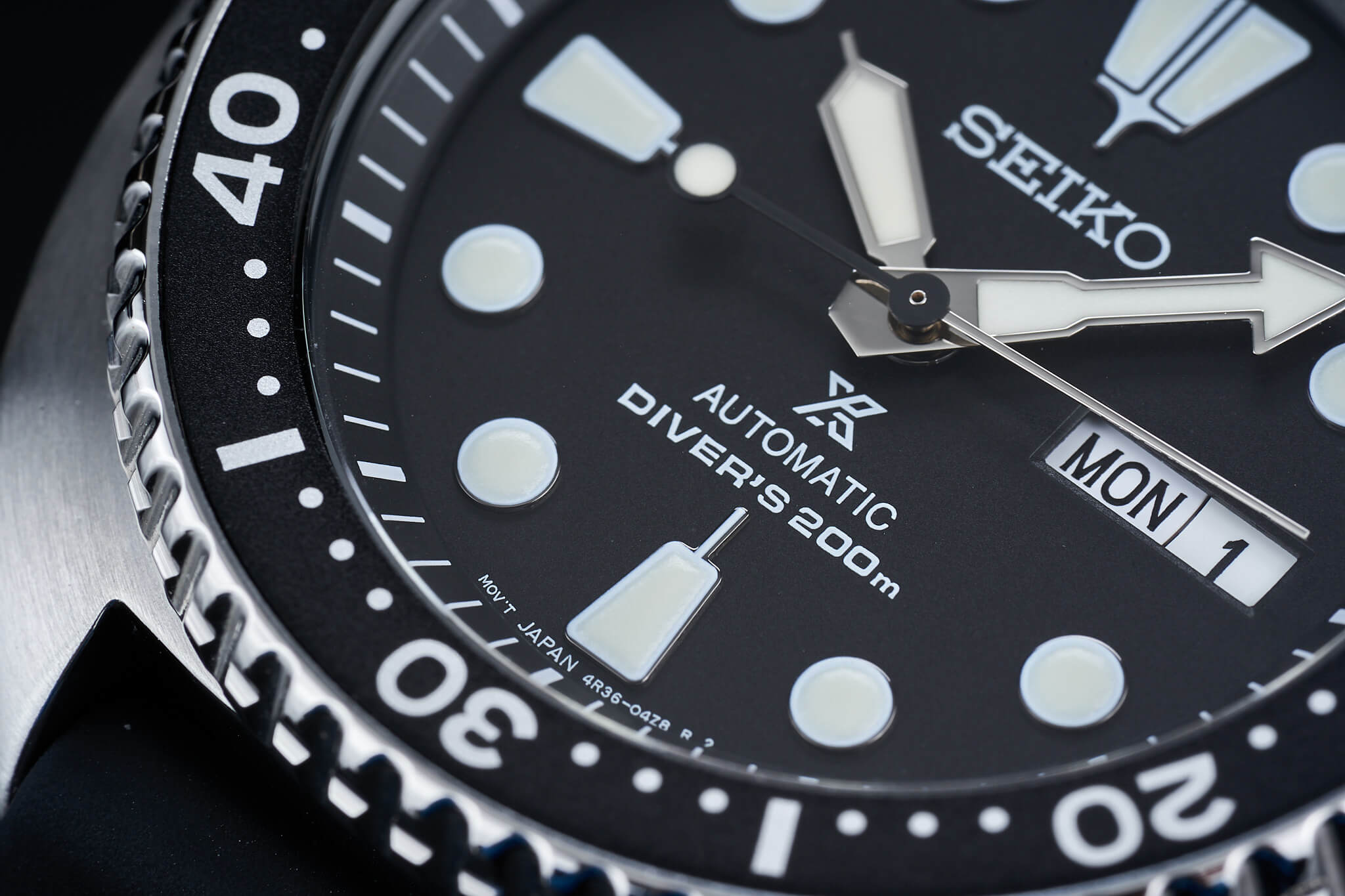 The overall dial layout on the Turtle closely mirrors the original 6309’s. Familiar round markers accented with chunkier markers at the cardinal positions adorn the dial. The marker at 12 is a split trapezoid and aids in orientation. Each marker is heavily filled with Seiko’s LumiBrite that is familiar to any Seiko fan. A day/date window at 3 stays true to the dial on the 6309.

Each marker has a silver surround. I hesitate to call them applied markers as they don’t quite give off that impression and lack the depth of other applied markers, even within Seiko’s own catalog. They do add a bit of depth over a printed dial like you would find on the SKX. 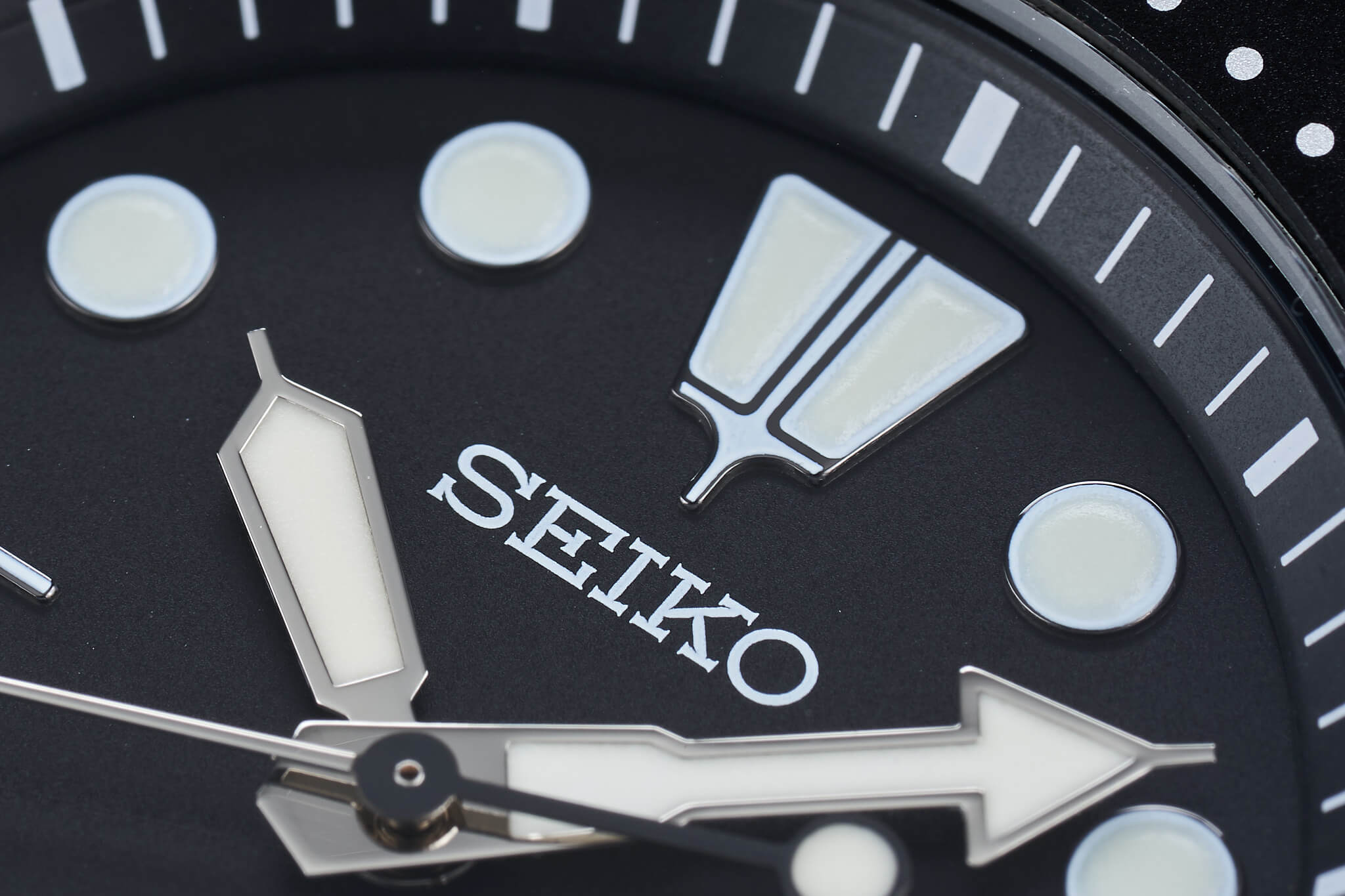 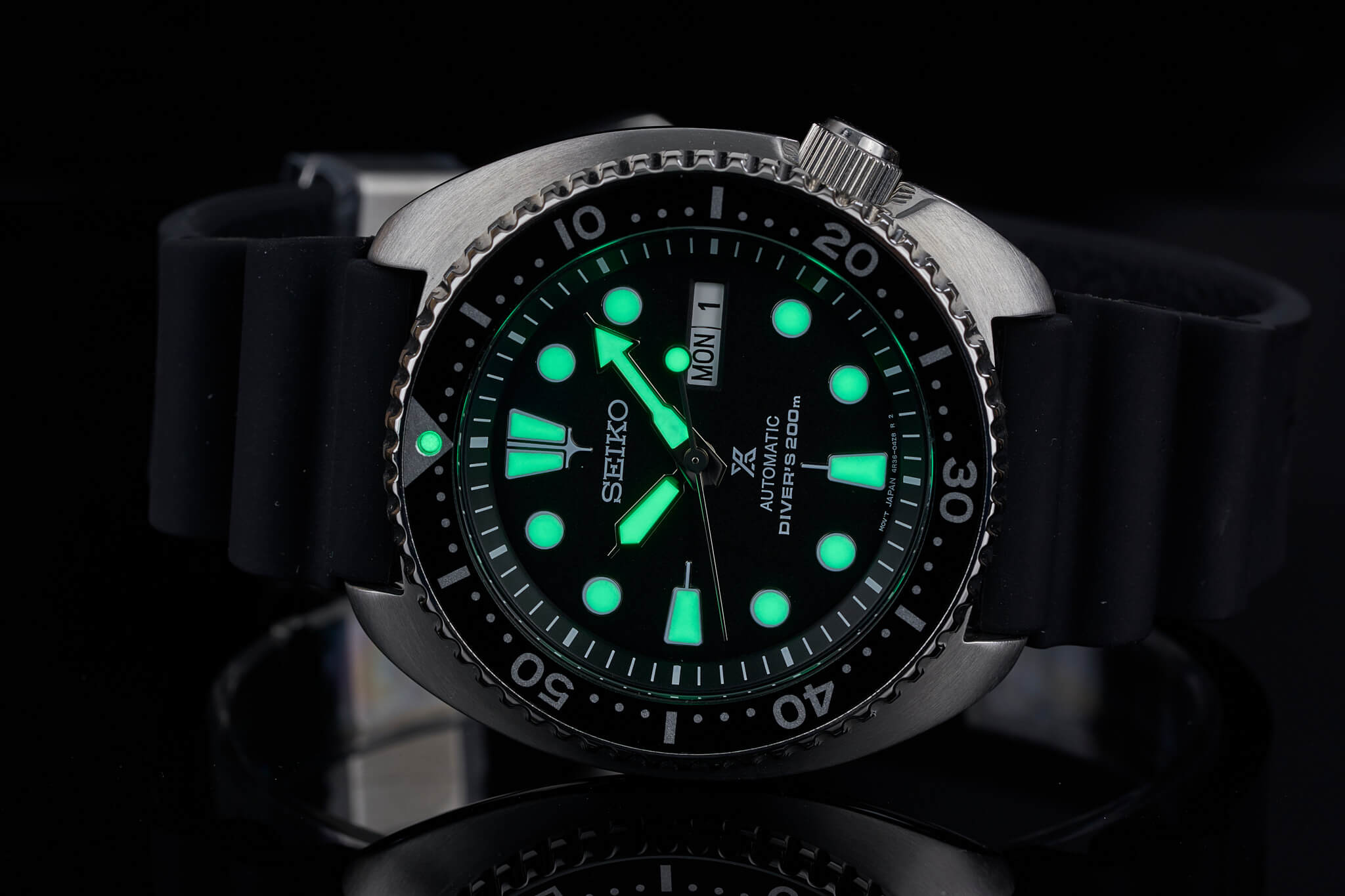 Noticeably extending beyond the bezel, the case of the Turtle is rather chunky-looking. While I’m not sure if fans gave the watch the name Turtle based on the shape of the case, it does resemble that of a turtle’s shell. There aren’t too many watches that follow this design, Doxa Sub models being the most obvious. 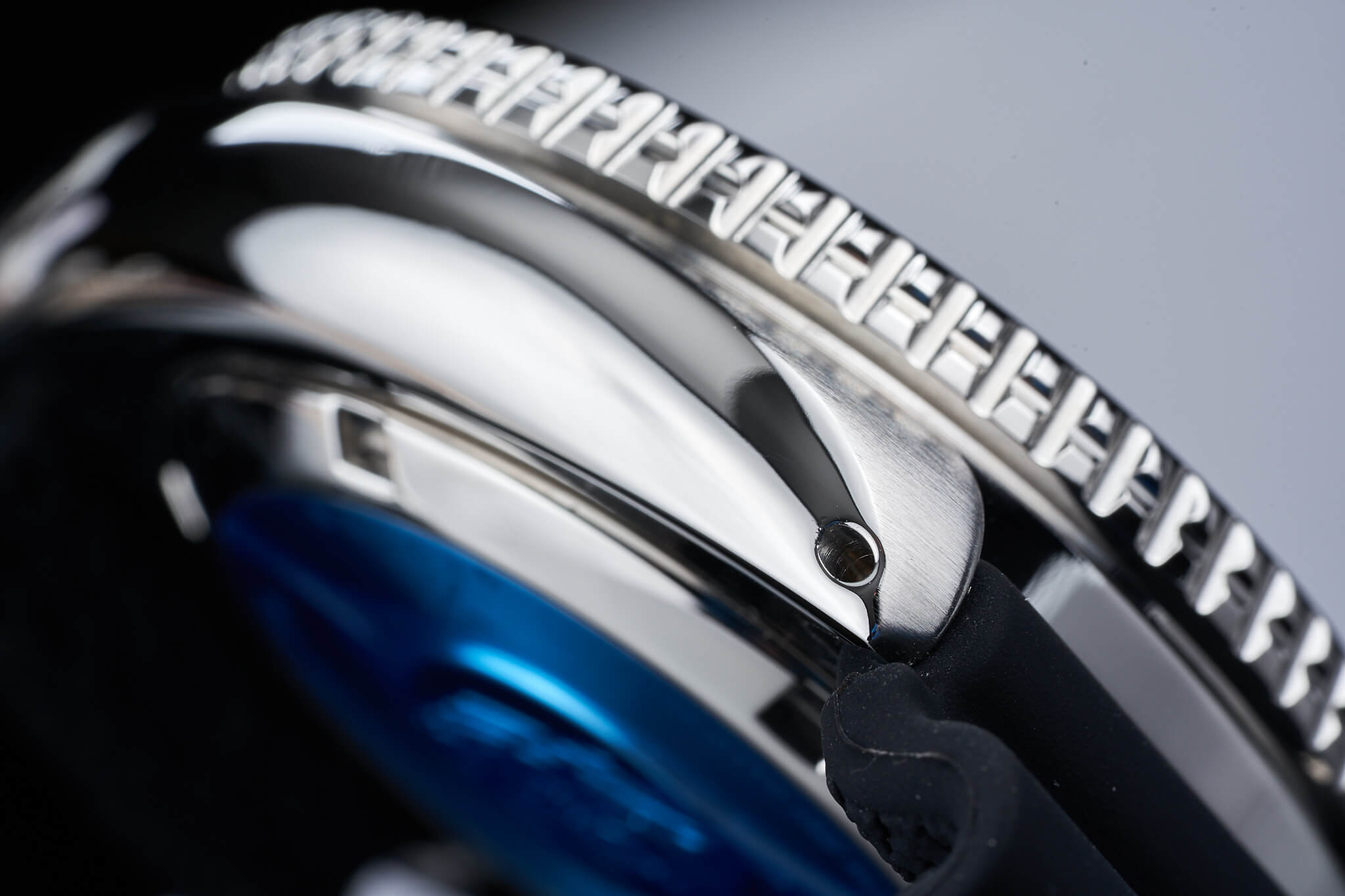 The bezel is about as standard as you can get from Seiko. Readable, functional, and without any frills, the bezel is smooth and reliable enough almost to the point that it’s boring. It’s been said before and I am going to say it again because it affects this specific watch: Seiko’s QC needs serious work. Having a bezel that is misaligned is unacceptable. There is no way Seiko is unaware of this issue and they need to fix it. Period. 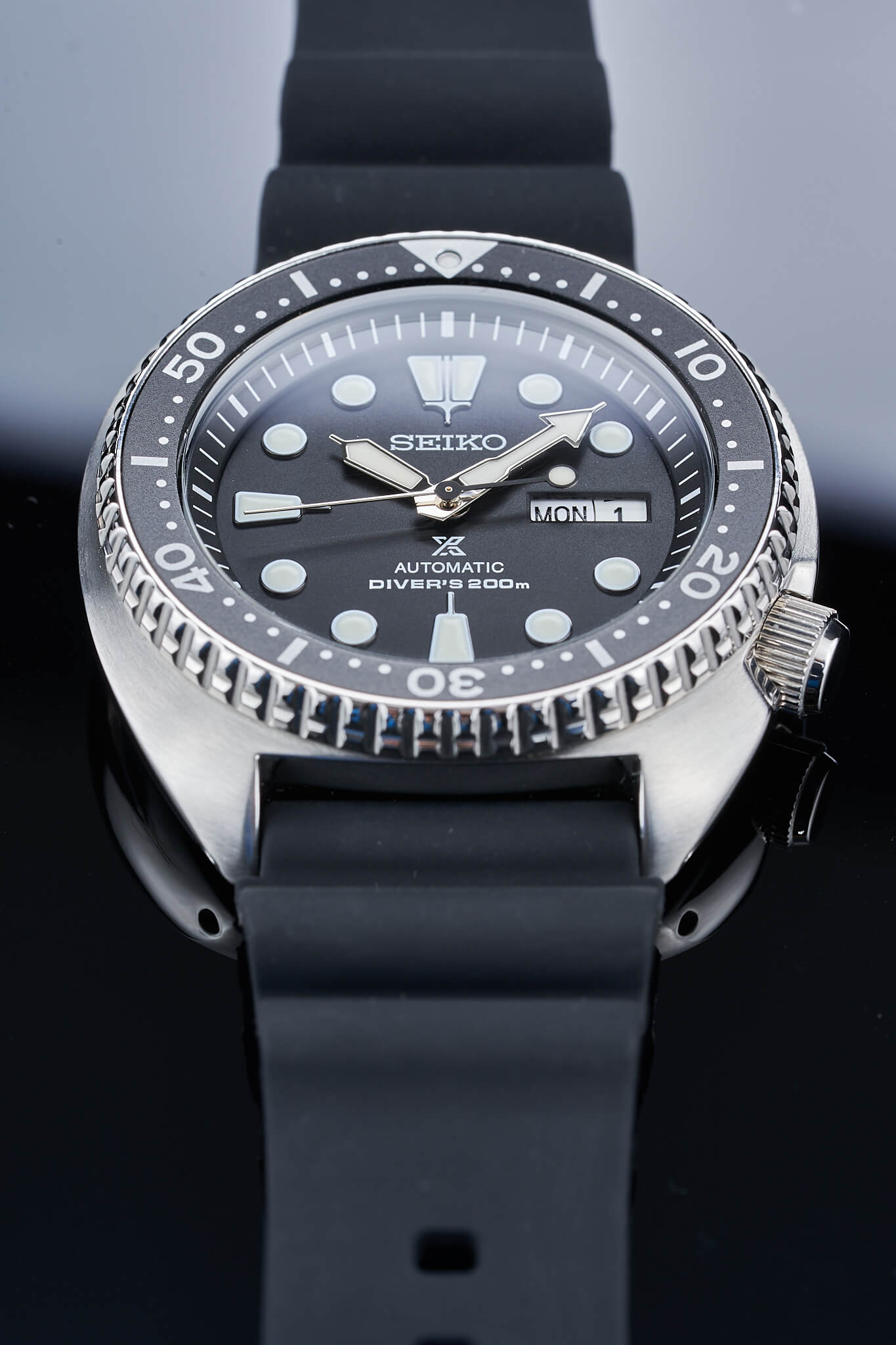 The strap included with this model is Seiko’s newer rubber strap that is wonderful. It is soft, pliable, and comfortable out of the box. The strap has excellent hardware with nice finishing and branding. This is the way to do a rubber strap. With that said, it is a longer strap as it is built for going over a wetsuit so you have a lot of slack if your wrist is on the smaller side. 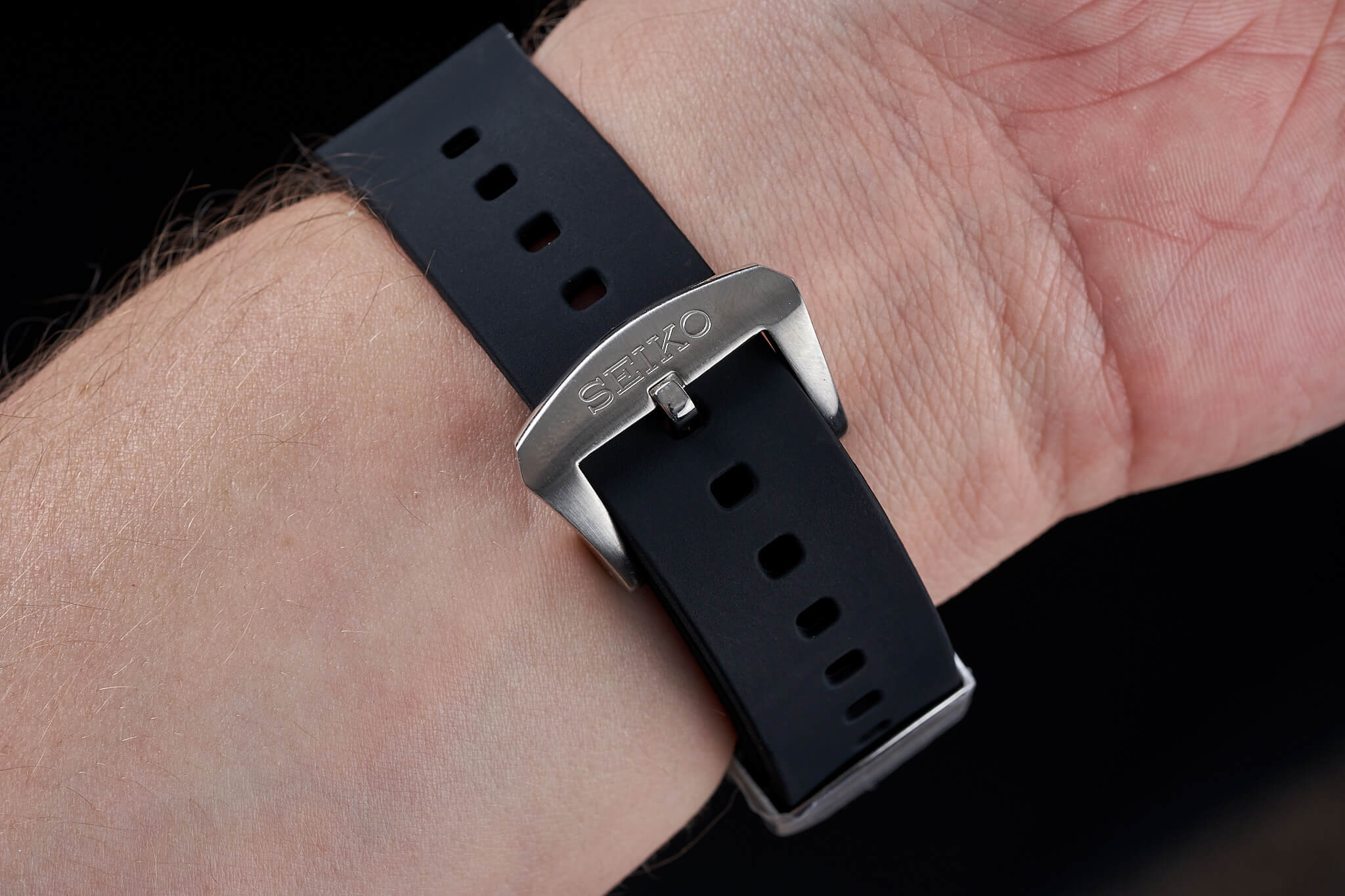 Compared to the SKX

Many view the Seiko Turtle as the proper successor to the SKX and in some ways they are right. The dials, handset, and bezel are largely the same. There are a few differences, mainly in the markers on the dial, but for the most part the Turtle feels familiar to those who have an SKX.

There are two key differences between the SKX and the Turtle, the first being the movement. You can kiss the Seiko shuffle goodbye with the Turtle. The 4R36 movement inside the Turtle allows the wearer to manually wind the watch as well as hack or stop the seconds hand when setting the time. This was always one of my main gripes about the SKX as I always felt silly shaking my watch repeatedly to get it to start running. 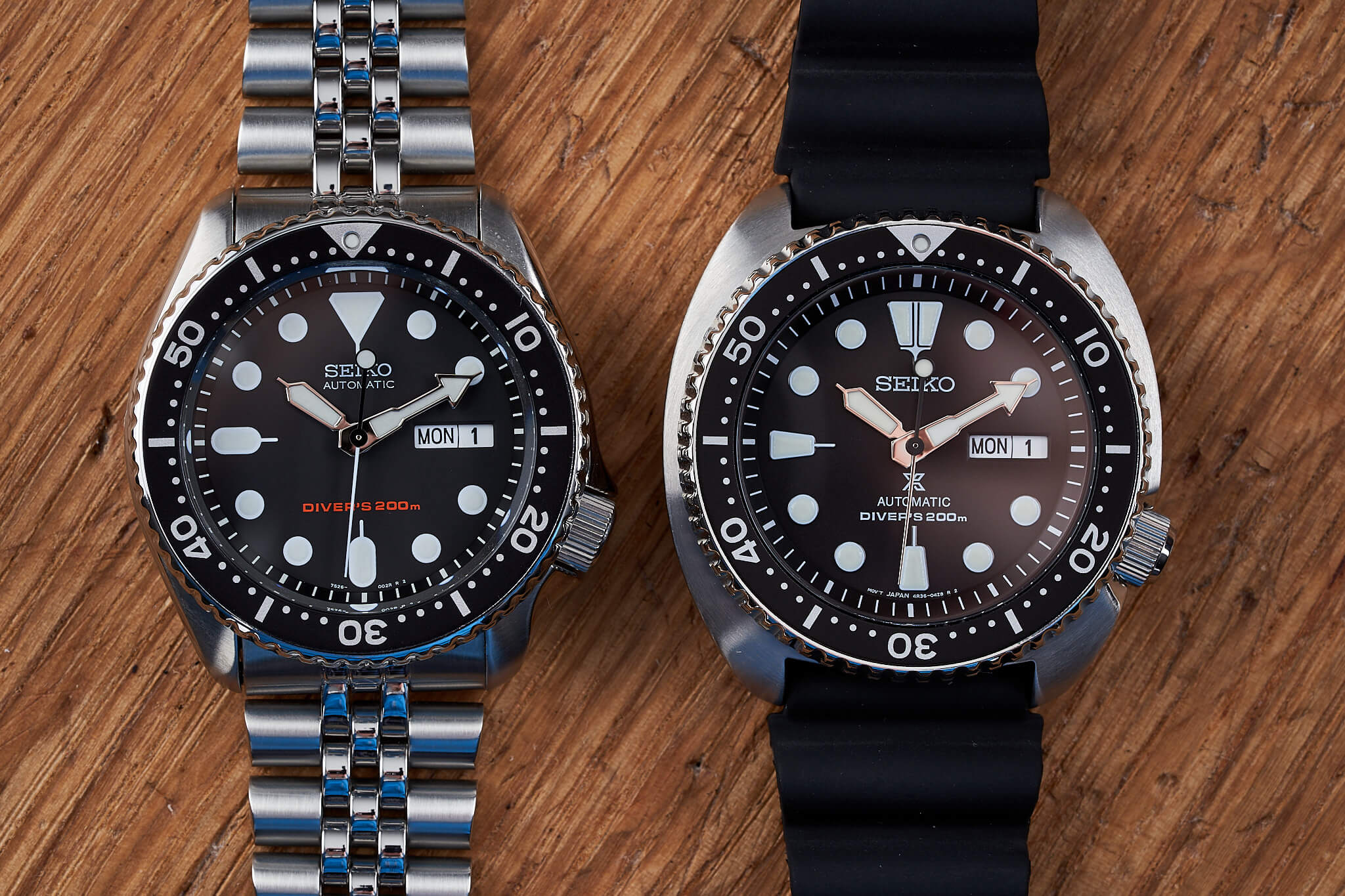 As I discussed before, the second main difference is the case shape. The Turtle is a larger watch than the SKX and those who say it wears like the SKX are lying to you. Seiko plays some tricks with the dimensions that make it feel smaller than it is, but it is nowhere near as small as the SKX.

The case of the Turtle takes up a lot more real estate than the SKX does. Because of the rounder case shape, it doesn’t feel as streamlined as the SKX. With that said, the Turtle feels like it could take more of a beating. There is more case around the bezel and dial to protect it if it were to get hit or scraped on something. 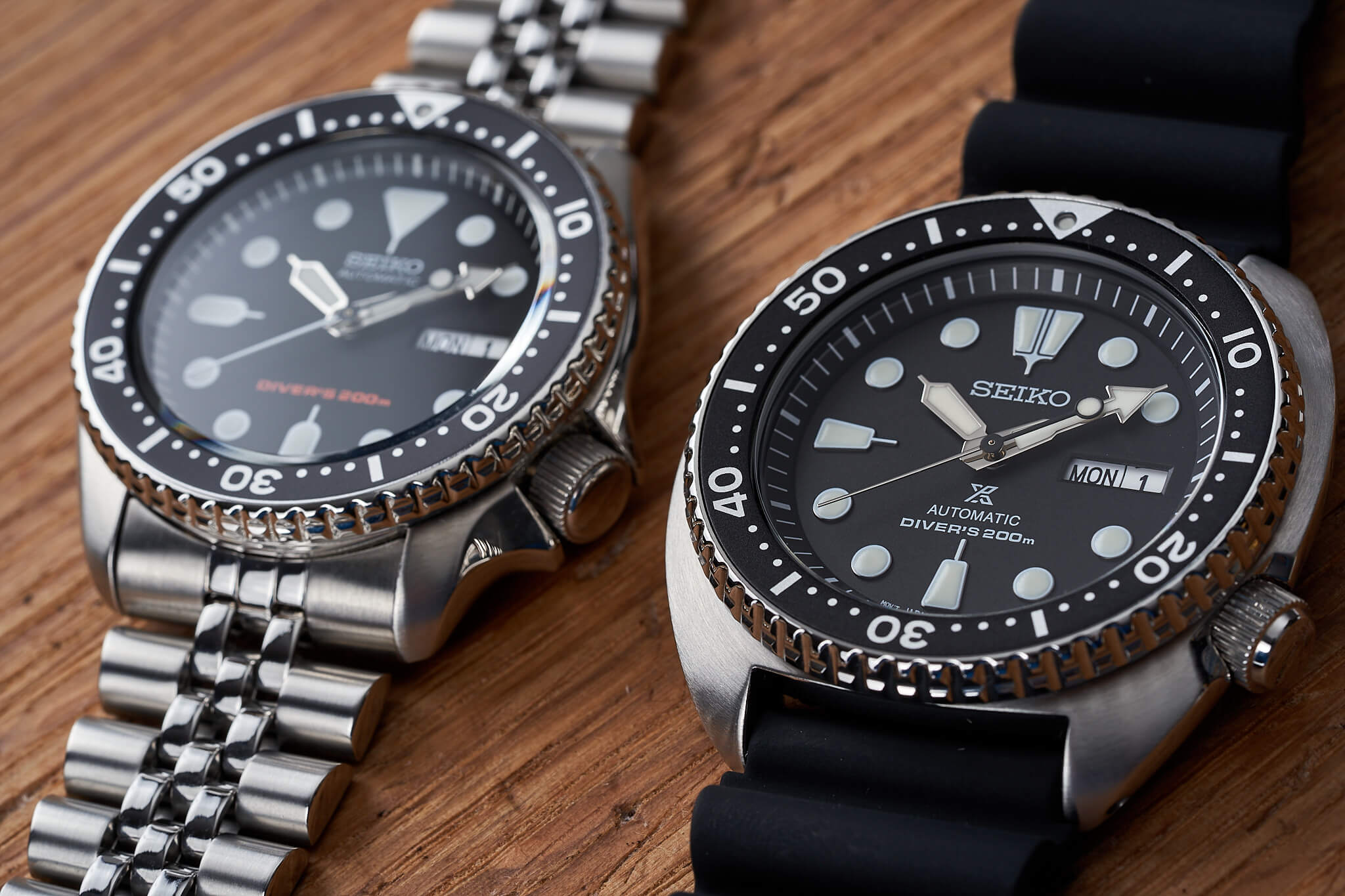 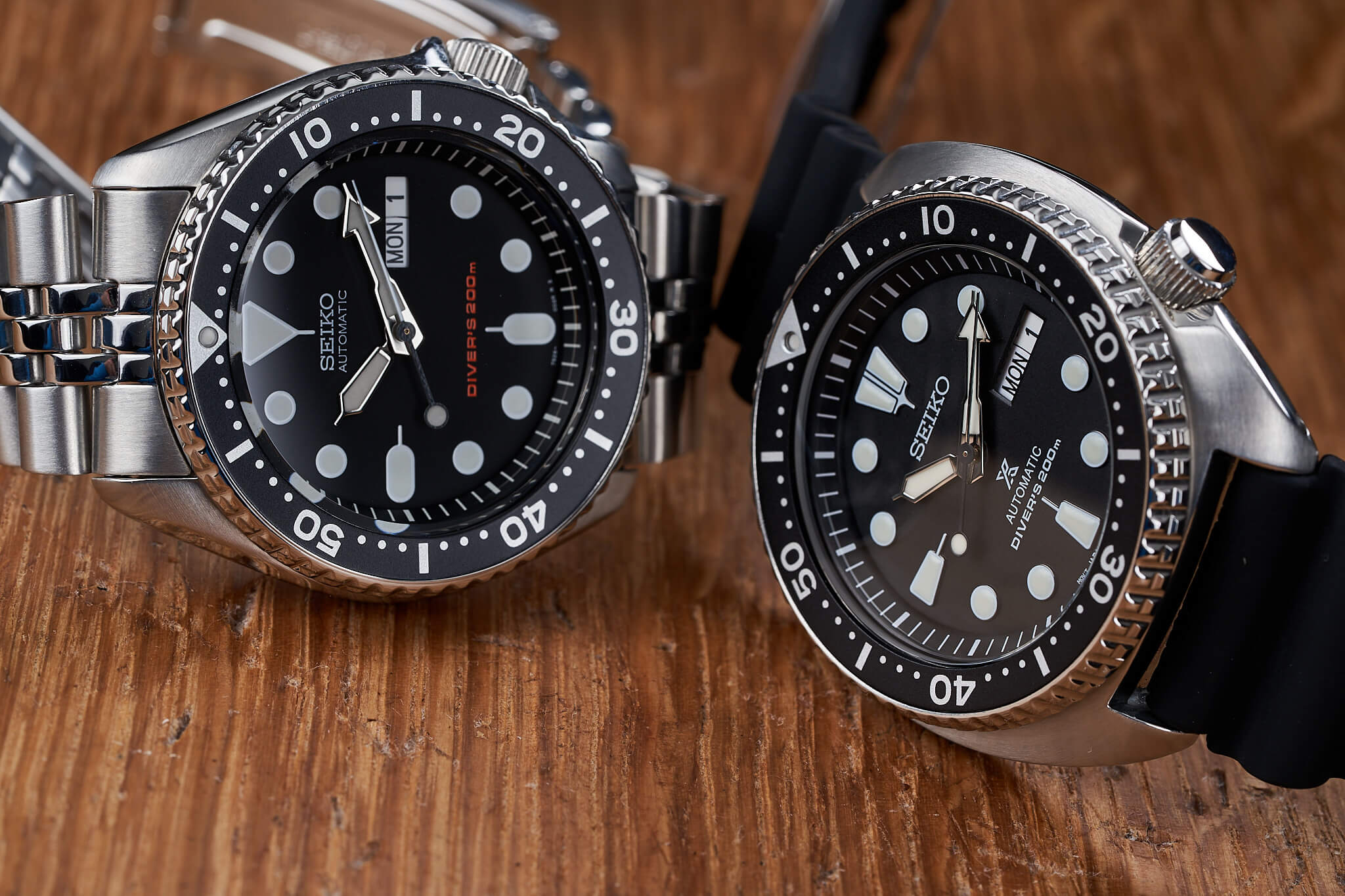 Both the SKX and the Turtle have 22mm lug widths. The Turtle’s design complements that lug width far better than the SKX. Despite the SKX being a 42mm-wide watch, I’ve always wondered if it would look less bulky with a 20mm lug width. The Turtle’s case shape and size plays well with the wider opening. 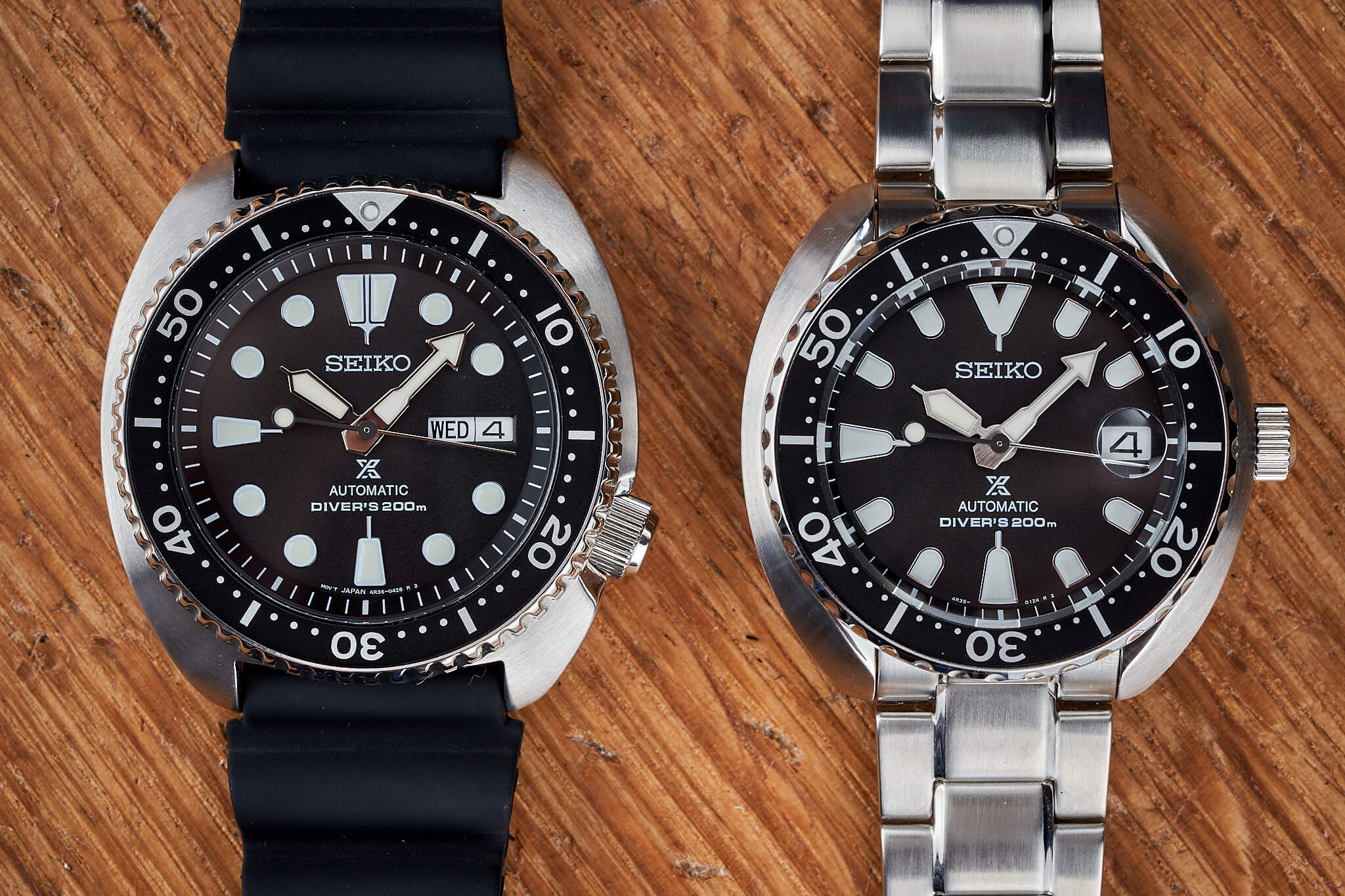 While Seiko doesn’t put the Turtle and Mini-Turtle into the same category in any of their materials, it is easy to see why the comparison is made. The case on the Mini-Turtle extends past the bezel and shares some of the same design cues on the dial as the full-sized Turtle. Many of the comparisons end there, however.

Despite its smaller size, the Mini-Turtle isn’t a tiny watch. Albeit smaller than the full-sized Turtle, the Mini-Turtle is still a 42mm watch that is 13mm thick. Seiko took the fat off the Turtle and knocked it down to 43mm lug-to-lug that gives the impression of it being small. When you put the two side by side, it doesn’t look that much smaller. 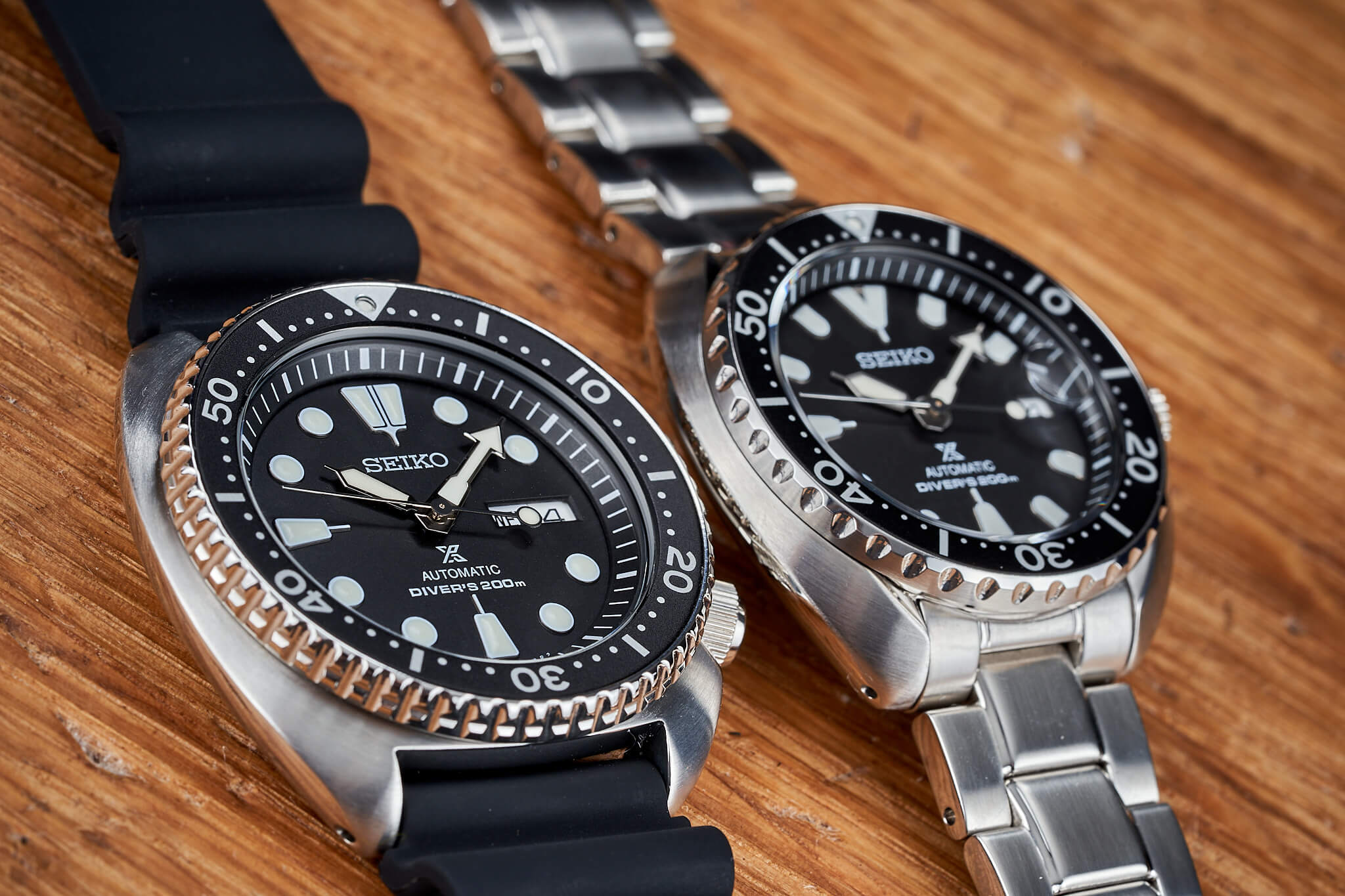 You lose the day window on the Mini-Turtle, leaving you with just the date as well as the controversial cyclops. Take it or leave it; that is an element of the Mini-Turtle you need to consider when choosing one of these either the Turtle, SKX or Mini-Turtle 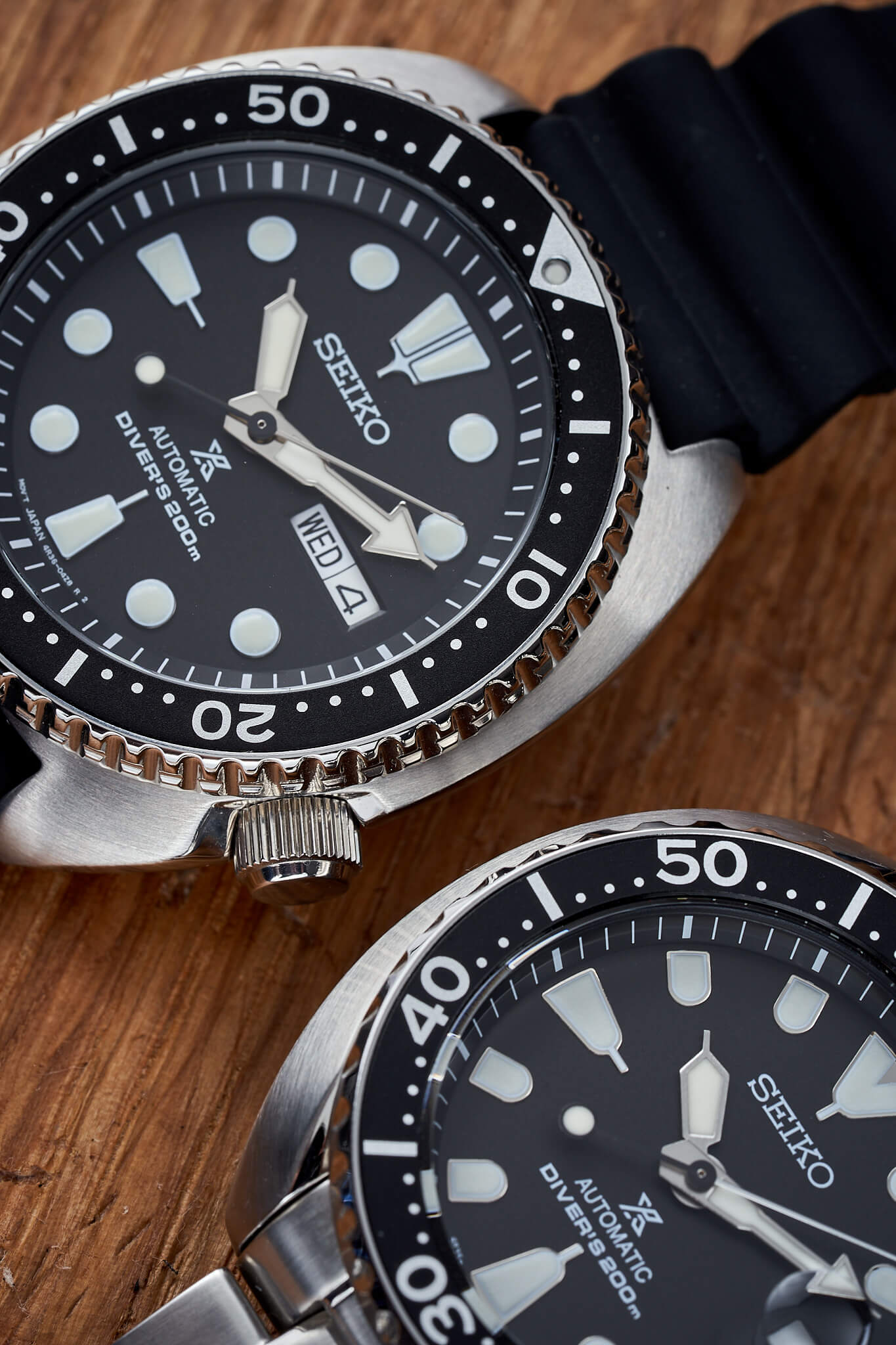 Which One Should You Buy?

This is probably the hardest question to answer. The 3 watches all offer something different and cater to different wrist sizes. If I could have it my way, I would put the Turtle’s dial into an SKX case with the Mini-Turtle’s crown at 3 o’clock with the 4R36 movement.  That isn’t possible, so let’s look at our options.  I’m going to break down what I think is the best scenario for each watch.

If you have a small wrist (6.5”/16.5cm or under) and want a modern watch with a modern movement, get the Mini-Turtle. The SKX still fits your wrist, but the Mini-Turtle will look better, fit your 20mm strap collection (if you have one), and give you some elegant touches like applied markers. 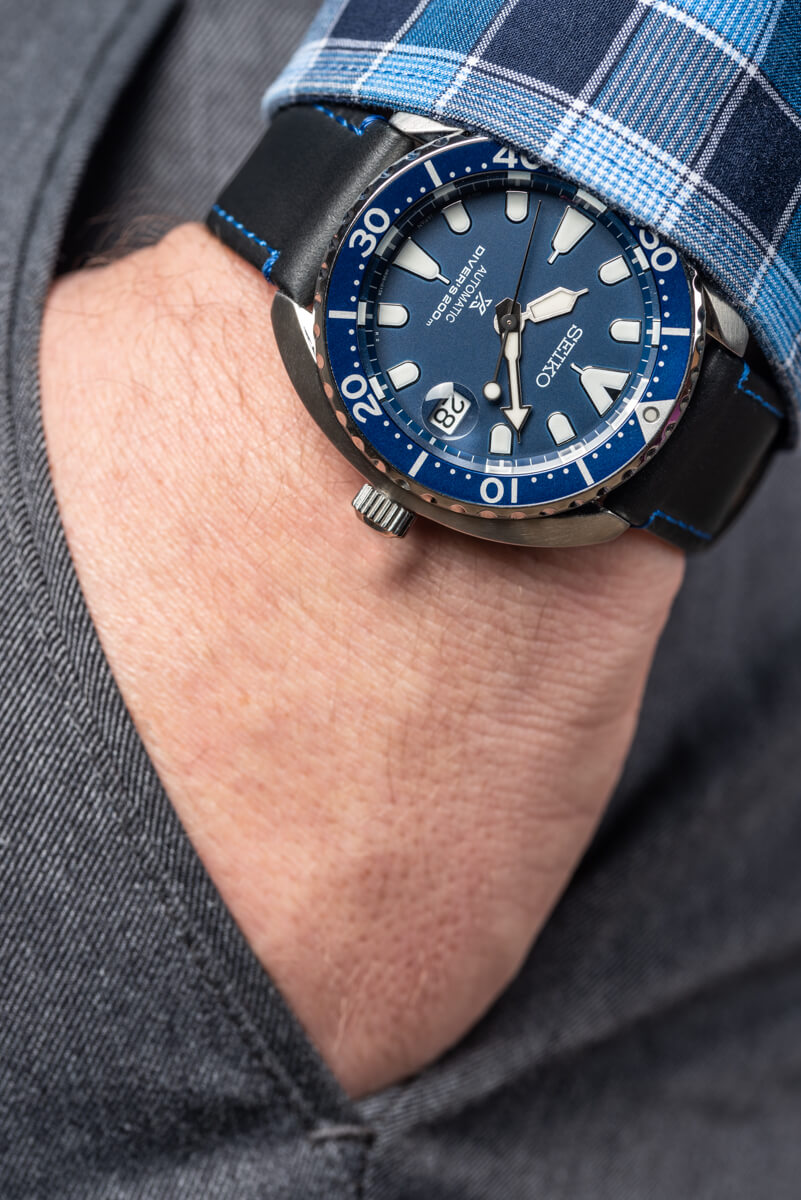 If you want a tried-and-true classic, a watch that needs no introduction, and plenty of aftermarket parts, get the SKX. Honestly, you can’t go wrong with this watch. 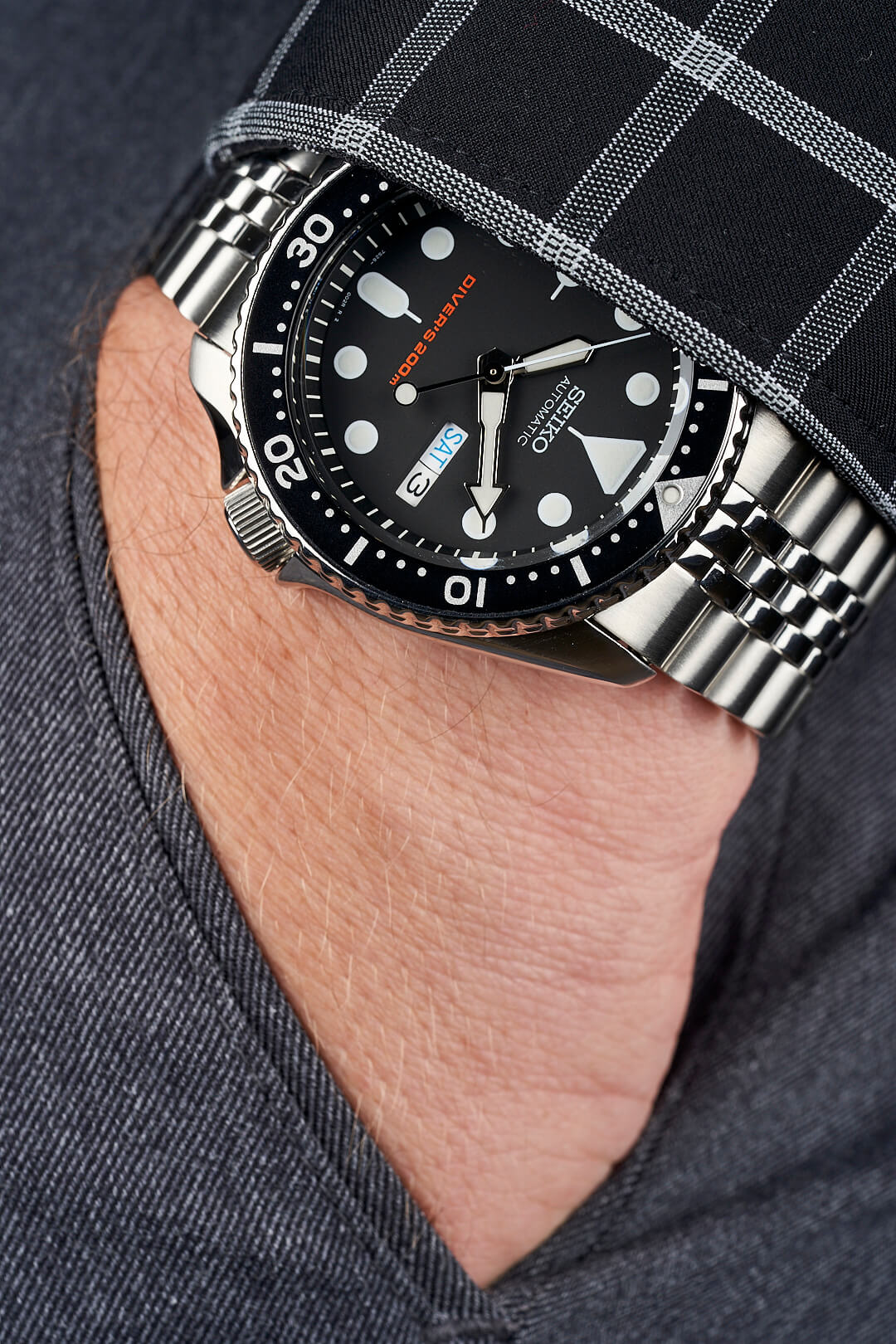 If you have a larger wrist or want some of the best design Seiko has to offer, get the full-sized Turtle. The Turtle draws on Seiko’s past iconic designs and brings them into the 21st century. If shaking your watch to wind it doesn’t appeal to you, this is where you want to be. 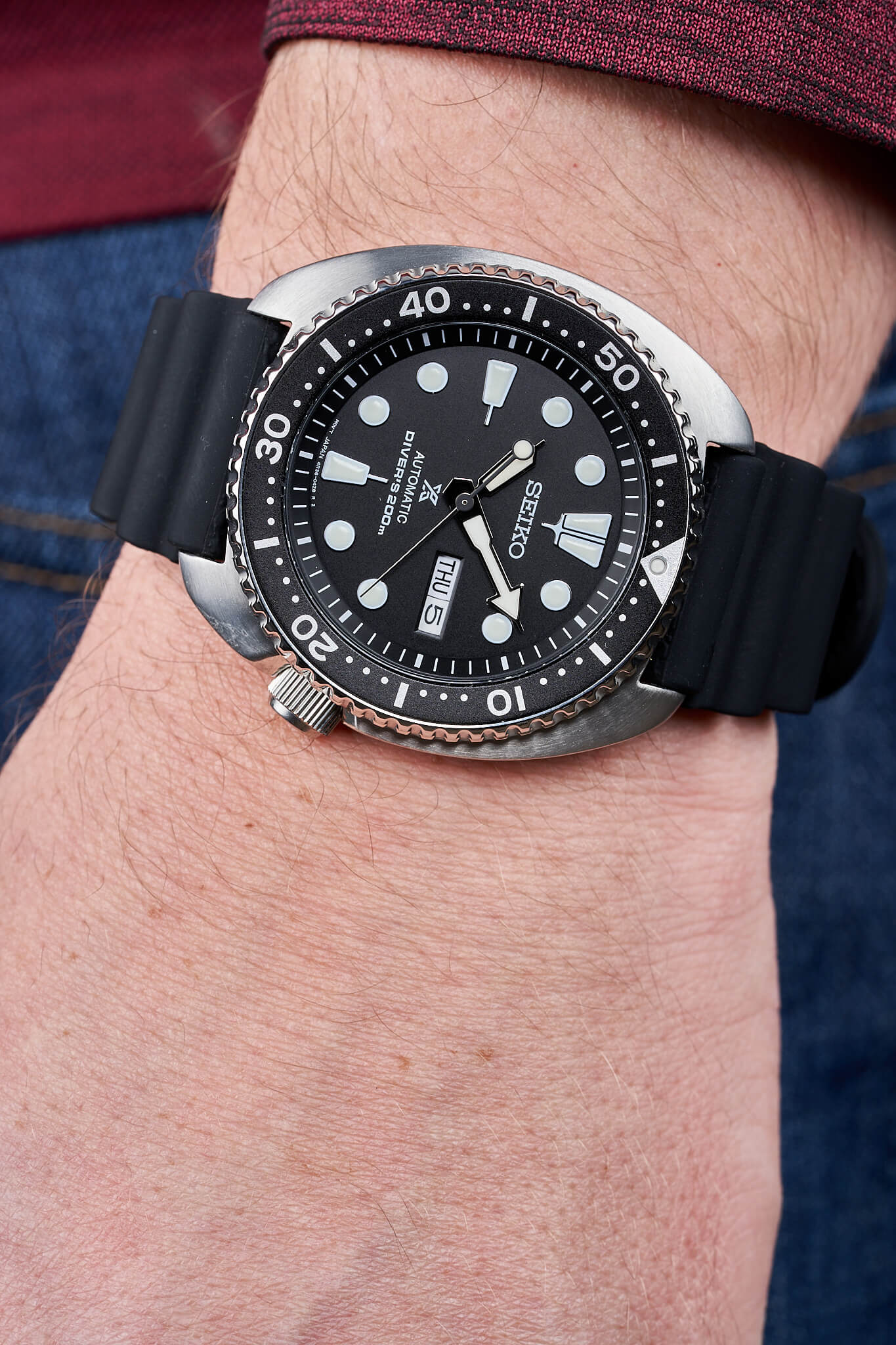 When I first brought the Turtle in for review, I planned on reviewing it on its own. However, after wearing it for a while and still having an SKX and the Mini-Turtle around to compare it to, it made sense to review it and compare it to two of Seiko’s other watches in this price category. The Turtle is a classic in its own right and easily stands on its own, but it might not be for everyone. 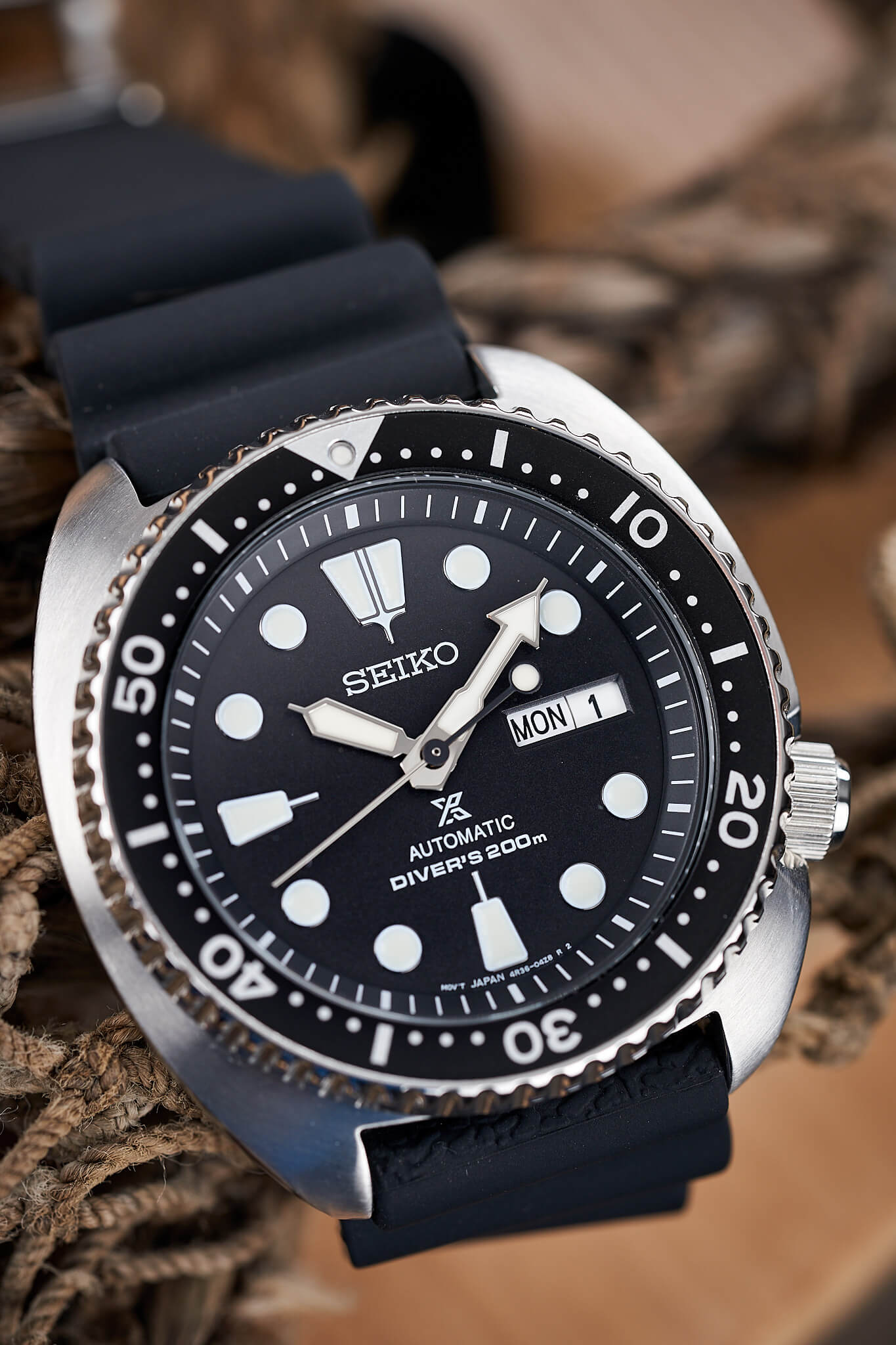 The Turtle has a certain charm to it. In the way that bulky Casio G-Shocks feel like proper tool watches that can take some punishment, the Turtle feels the same way. It looks like a watch built for beating the crap out and knowing that it still keeps time.

The bottom line is Seiko knows what they are doing and brought a vintage watch into the modern era and kept all of what made it a classic. The size of the Turtle probably puts some people off from trying one out. If you’ve never given the Turtle a chance, do yourself a favor and try one out. You won’t be disappointed.

More Images of the Seiko Turtle 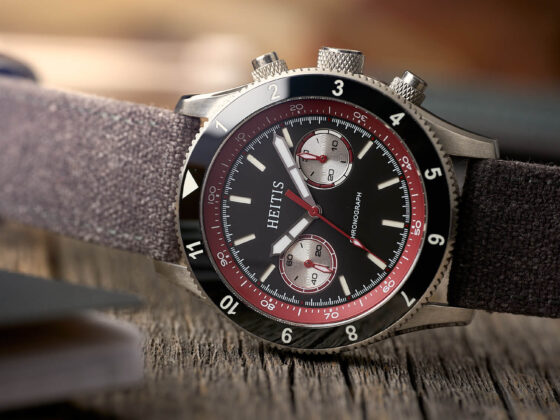