An affordable automatic chronograph from a storied brand
byMike

You’re likely no stranger to Longines; the brand has been around for nearly 200 years and can fairly be considered an entry-level luxury Swiss watch brand. That heritage and price point equates to high visibility and brand recognition among even the most wet-behind-the-ears watch nerds.

And perhaps no brand has better capitalized on the vintage reissue trend than Longines. Starting in 2007 (way ahead of the curve), Longines has been digging into their archives and reproducing hit after hit, from divers to chronographs. In 2017, continuing their fascination with themselves, they released what I’d consider one of their best efforts yet: The Longines BigEye chronograph.

While many of their other reissues came from the company archives, in the case of the BigEye, a private collector brought the 1930s pilot reference to their attention. The watch is a near 1:1 copy of that original model. It was an immediate hit and was good enough to garner one of the highest accolades in watchmaking (and certainly the only one specifically for reissues): The Grand Prix d’Horologie Revival Prize. 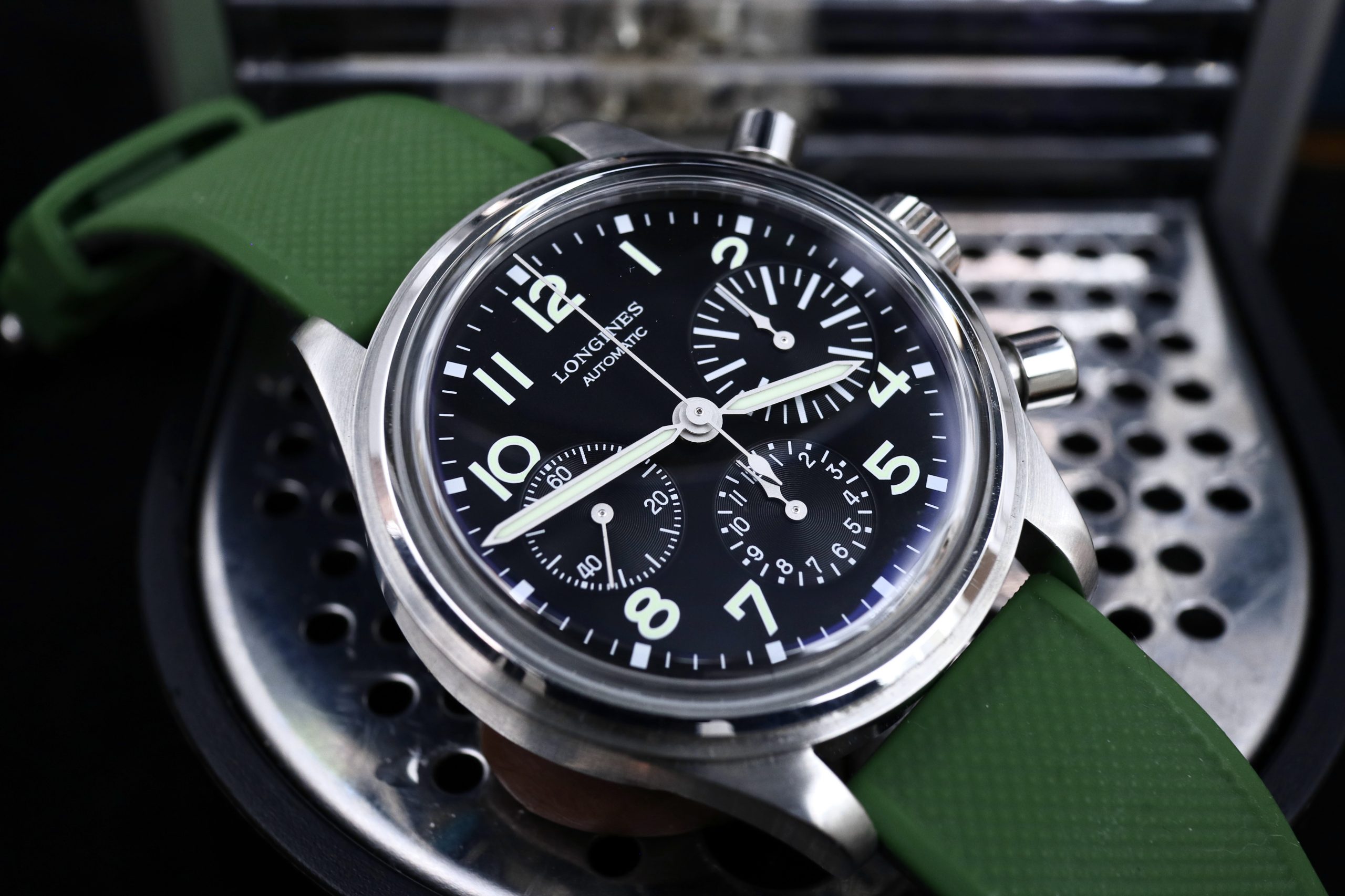 But do a bunch of stuffed shirts in Geneva know what they’re talking about? Does the watch live up to the hype? Why did they leave the N off Navigation? And why isn’t there a space between Big and Eye? I had no idea, so I reached out to a friend to borrow it and find out.

Overall, the Avigation BigEye wears much better than its dimensions would suggest. As a result of the automatic chronograph movement lurking in the case, the watch is 14.5mm thick. The thickness was one of the major sticking points when the watch came out but owing to the reasonable 41mm case diameter and a lug-to-lug just under 49mm, the watch generally wore well and looked great. 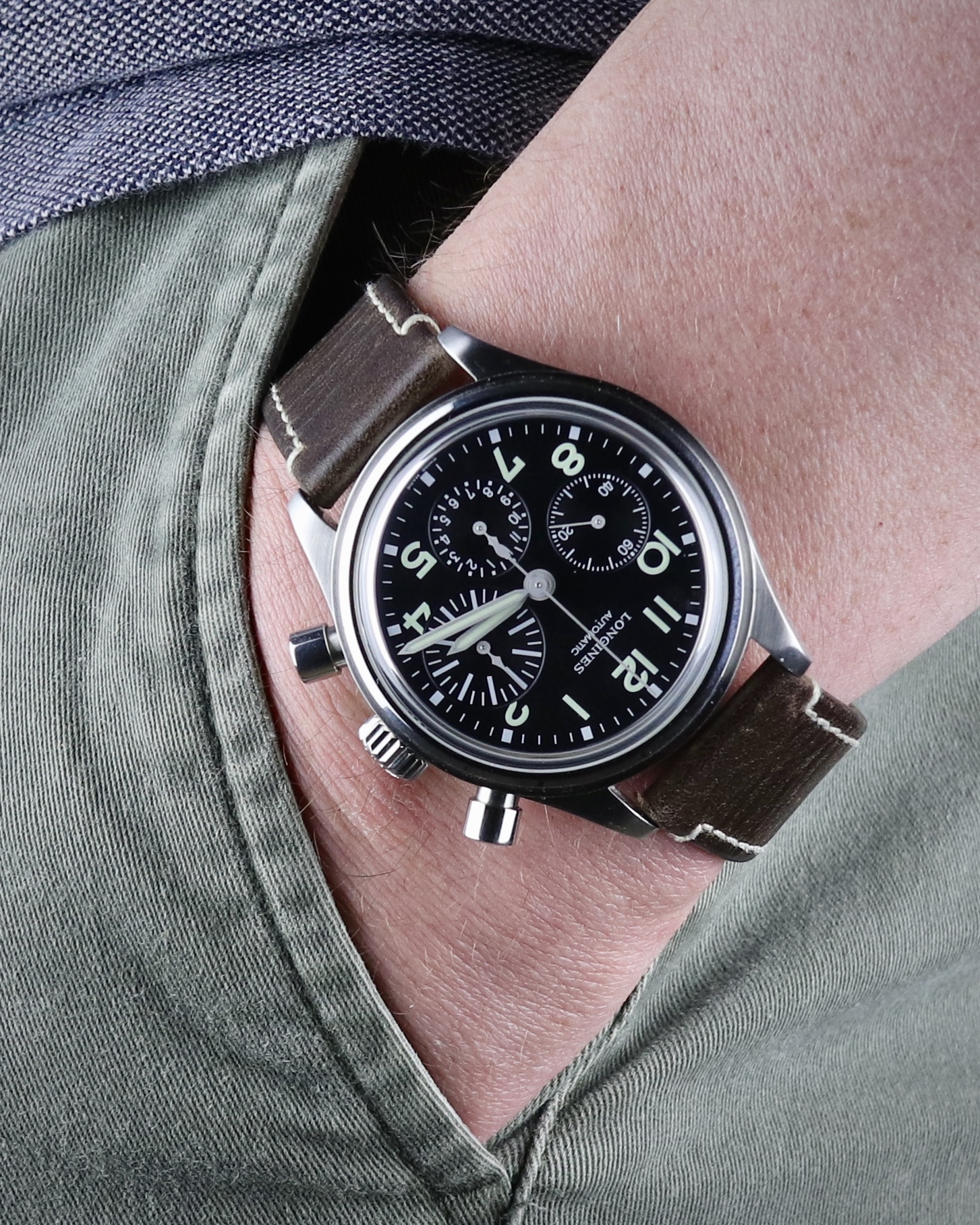 That said, the lugs shoot straight out from the case and as such the watch fails to grip the wrist unless fastened as tightly as possible. The result is excess WristShift™; that’s when the watch creeps toward the outside of the wrist, so it sits off-center.

The dial is highly legible, full without feeling cluttered, and features the standout Big Eye minutes totalizer. The subdials are sunken and have a radial pattern, adding subtle depth and texture that’s quite pleasing when caught in the right light. To Longines’ immense credit, they did not use vintage lume, and they are to be thanked for that. It’s pleasing to look down and experience the synergy of freshness, legibility, and vintage design that the BigEye’s dial offers. 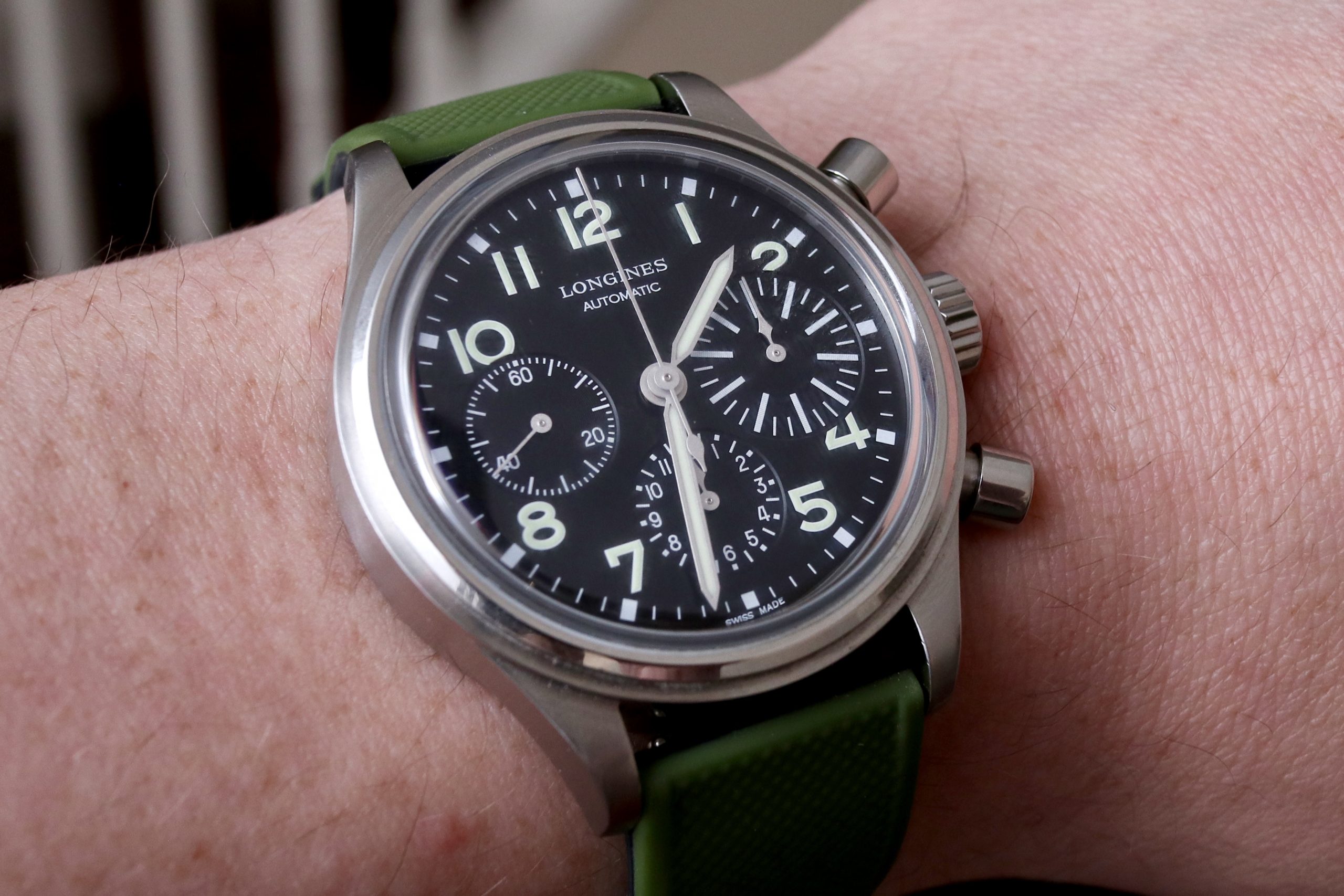 The first thing you’ll notice is the eponymous Big Eye; the minutes totalizer at 3 o’clock is jumbo- sized and features bold markers every three minutes. I’ve heard suggestions that there must have been a practical reason for this demarcation system, but my theory is it probably just looked nice; the balance within the large subdial counteracts the lopsidedness of the full dial. Aiding this balance is the lack of date; while the movement has the date, the brand opted to adhere to the dial layout of the original. Thank goodness. 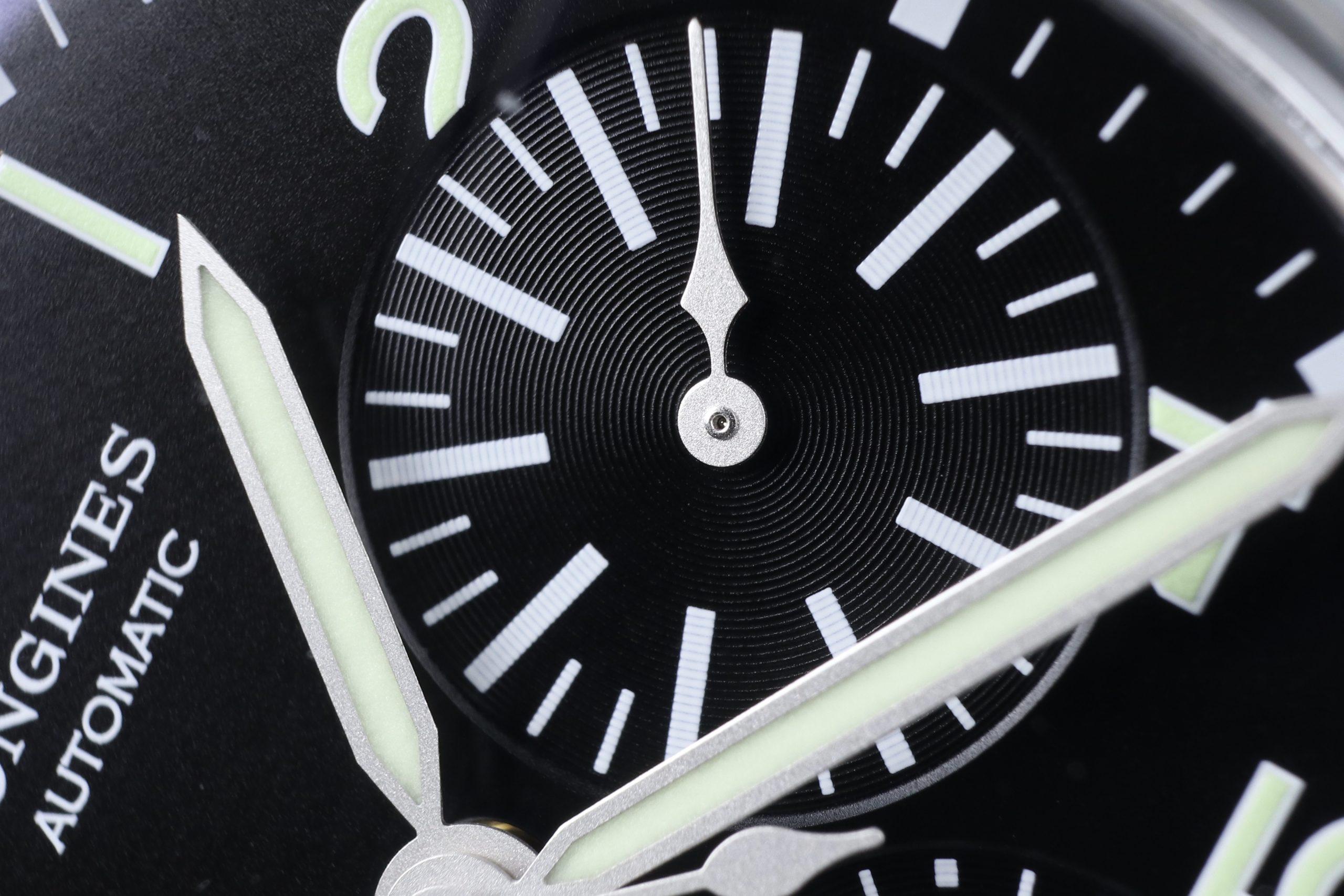 I mentioned that Longines was kind enough not to use vintage lume. While there are instances when vintage lume plays well, in most instances it comes off as inauthentic; manufactured legacy applied directly to a dial. As it is, the watch feels at once vintage and new, fresh. The minty-green lume applied here charges quickly but is uneven, with the minute and hour hands shining brighter and longer than the numerals.

Save the word Automatic below the brand name, the dial is an exact copy of the original watch. The handset (I am particularly fond of the subdial hands for the minutes and hours totalizers), numerals, minute track, lack of units track (pulsometer, telemeter, tachymeter, etc.)—every bit is identical to the original. Some may gripe about the subdials cutting into the numerals, but since it’s a copy of the original, any peculiarity of the dial can be both blamed on and justified by history. Longines clearly looked at the vintage reference and said, “Well all we need to do is size this up and we’re good.” 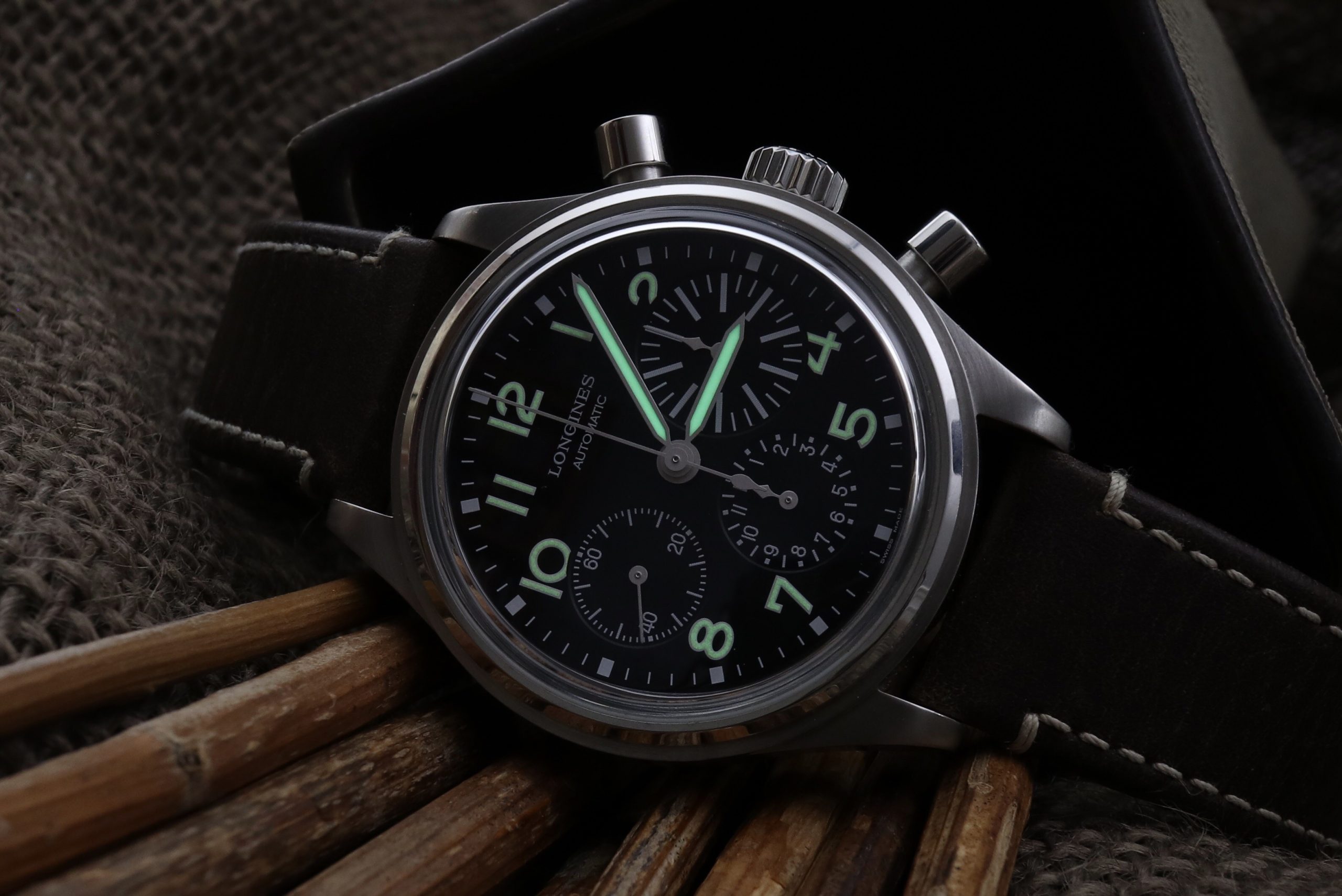 The case is a no-frills affair; brushed in its entirety except for a thin bezel surrounding the sapphire crystal (domed, for vintage goodness), the finishing is crisp and uniform. Big polished pump pushers easily operate the chronograph, while a polished push-pull crown is graced with the brand’s name and winged hourglass logo. 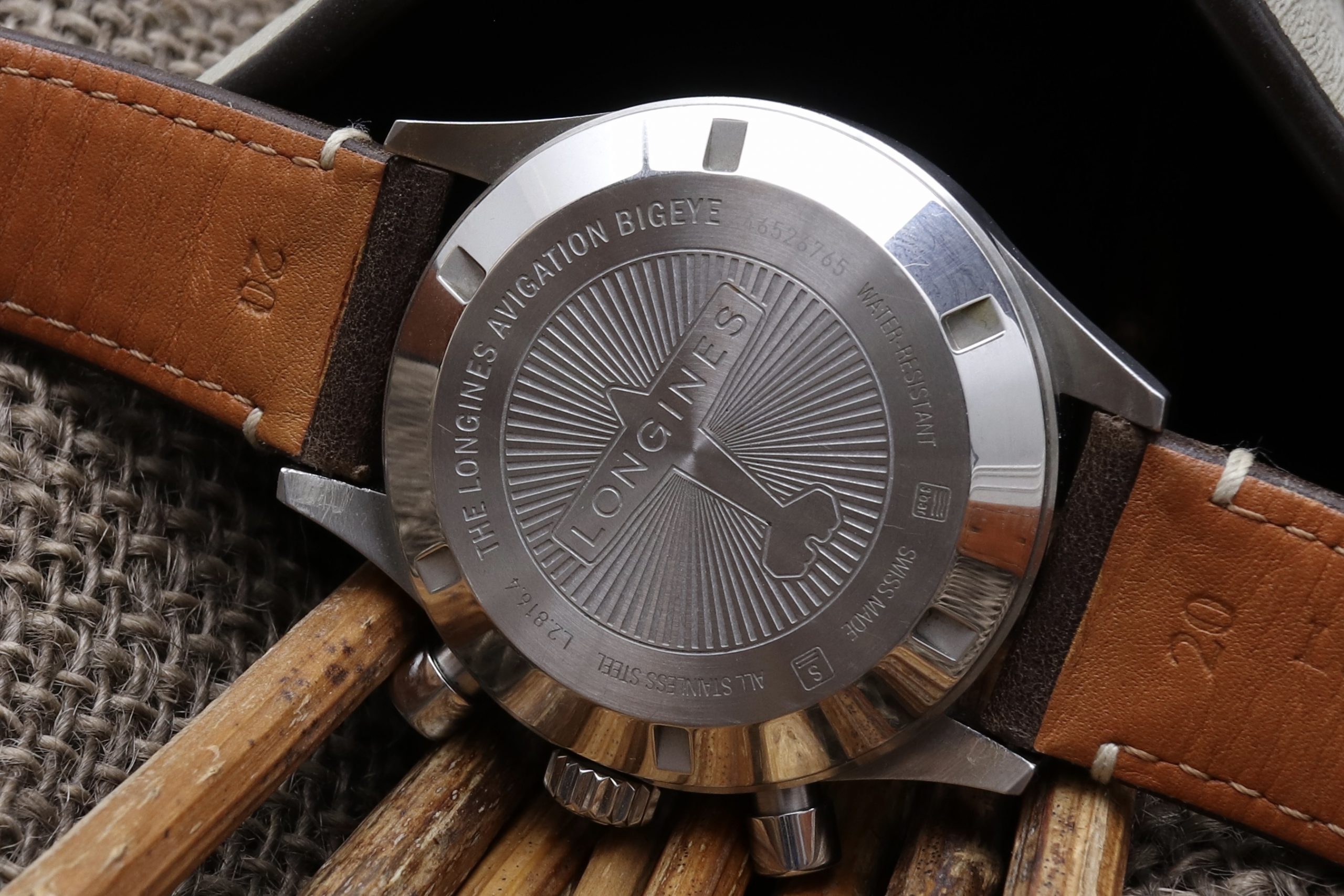 Perhaps the most interesting feature of the case is the lugs. They come out of the case smoothly, a natural continuation of the midcase’s curve, straight on the top, a slight slope on the bottom. The effect in profile is that of some old sword from the subcontinent, or perhaps of a talon—I couldn’t quite put my finger on it but I liked them. The beauty of the lugs is somewhat undercut by the fact that they do not descend below or even to the caseback, making the watch sit higher and looser on the wrist than it might otherwise. If this watch featured a handwound movement, it would not only be more faithful to the original but would also be markedly thinner, allowing the lugs to do their thing and hang tight onto your wrist. 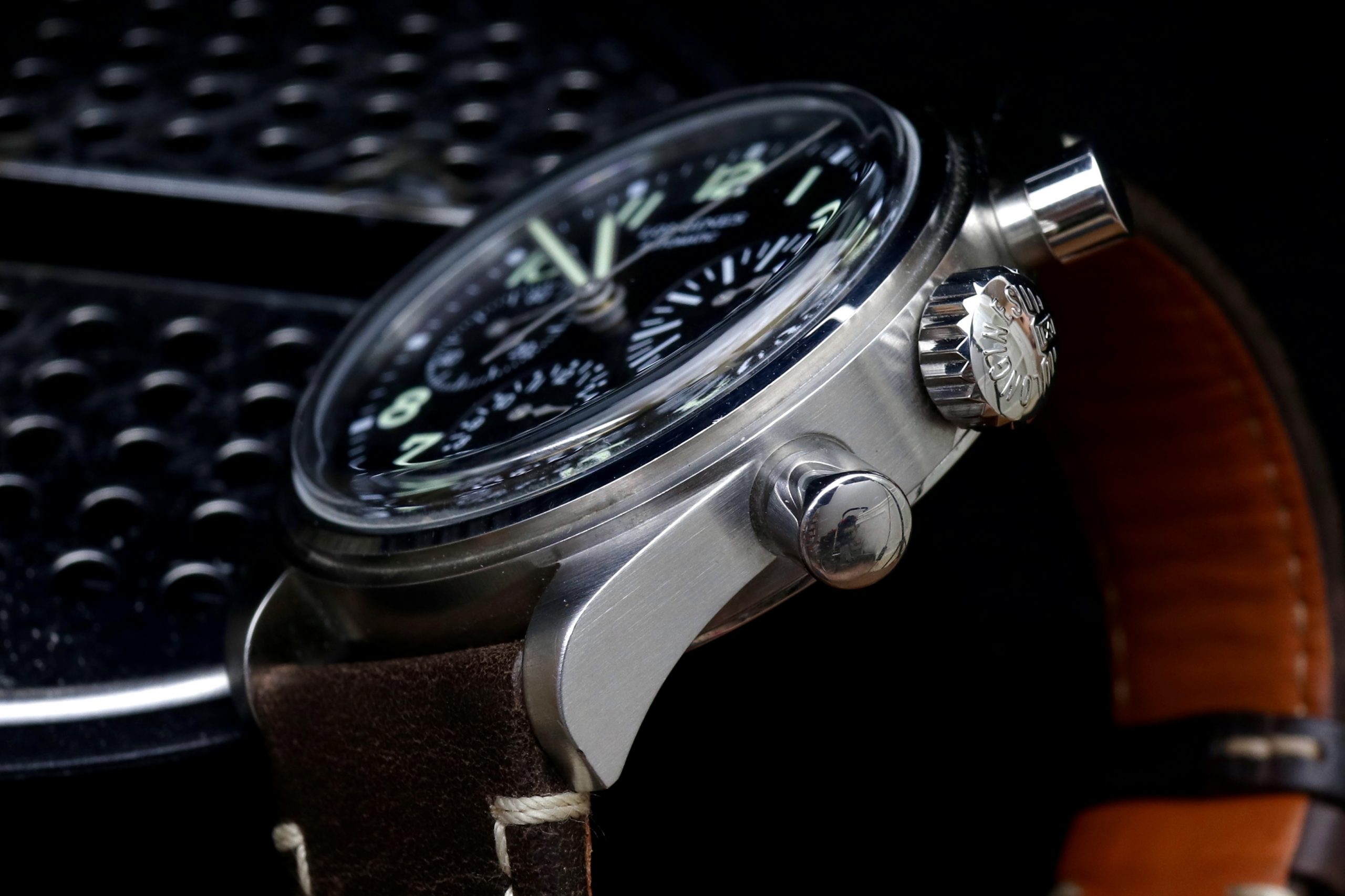 The screwdown caseback is engraved with a plane at the center of a starburst pattern, and features plenty of watch details. Underneath it all is the automatic Longines L688.2, a heavily modified ETA 7753. So modified, in fact, that the chronograph mechanism itself has been converted from a cam and lever to a column wheel, widely (though inconclusively) regarded as the superior option. As I said above, the movement does have a date, normally operated by an adjuster positioned in the case at 10 o’clock, which has been omitted here; as it’s not crown-operated, you’re not left with a dead crown position.

The strap that comes with the BigEye is a simple brown leather one with contrast stitching; my friend’s was broken in, though I understand that the strap comes that way, with little stiffness. It’s also on the short side, but Longines does offer an XL strap as an alternative. 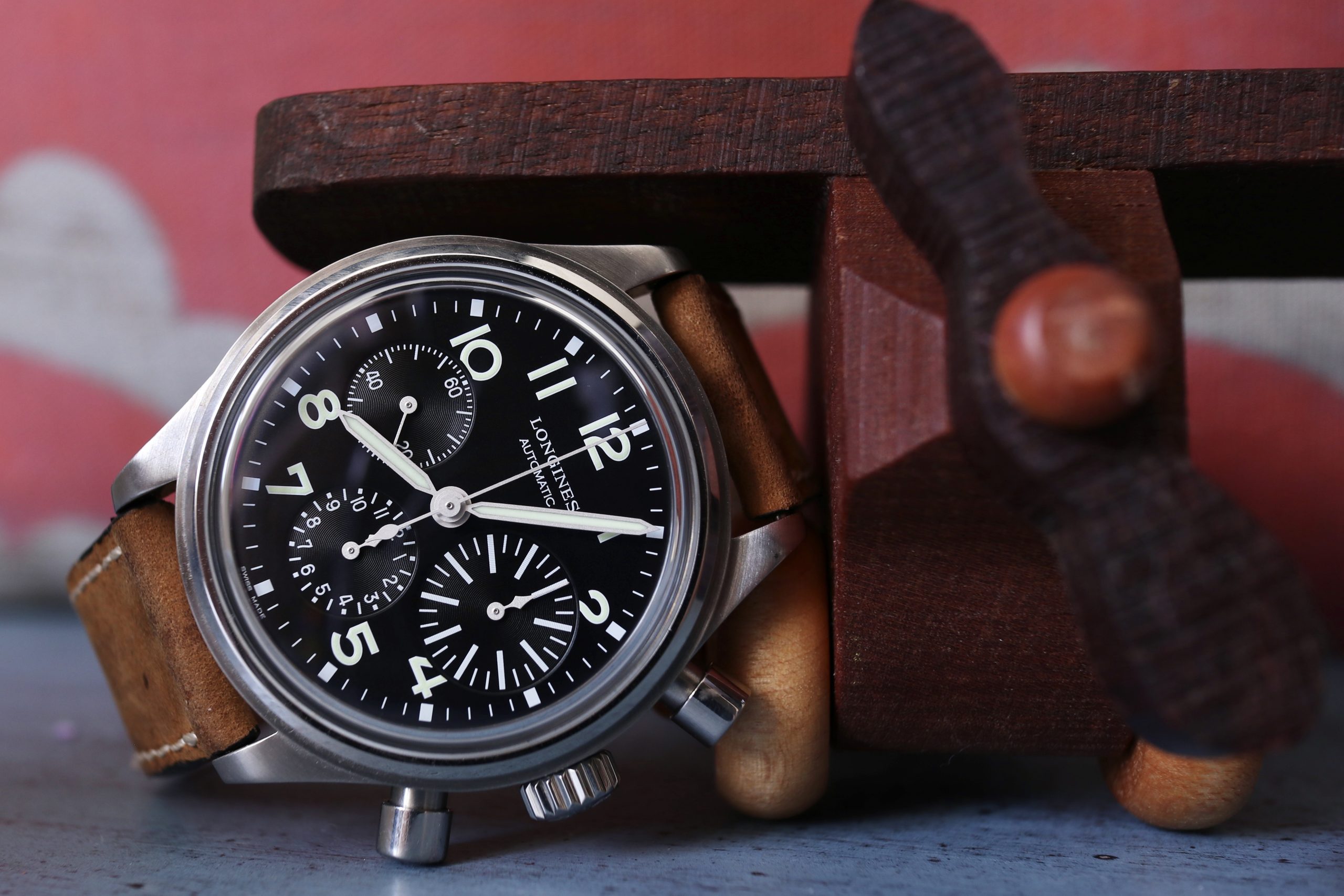 The included strap, though, is just a distraction. As with most black and white steel watches, this one is a strap monster. It will pair easily with almost anything. I say almost anything because while it looks great on a NATO-style strap (which also solves the WristShift™ issue), you’ll need to be wary of the added height; a single-pass strap may be a better option.

The Avigation BigEye may well be the only three-register, dateless, vintage-inspired chrono out there (I suppose the Omega Speedmaster is an obvious alternative, but also twice the price at retail). And because of the watch’s ability to tick those boxes while presenting decidedly modern specs, it’s going to be a popular watch. It’s priced appropriately, in line with many comparable watches. The wearability issue is the only thing that may get in the way, but it isn’t as severe as it could be, and the totality of the watch is such that that issue is of secondary concern.

As has been mentioned on the site before, there is no shortage of options when it comes to this type of watch. Longines has created another excellent addition to their Heritage line. That’s not up for debate. When you faithfully execute a reissue of such a classic-looking timepiece—even skipping the modern urge to add a date—it’s hard to mess up. The bigger issue is if this particular watch—this particular automatic chronograph—is for you.

Oh. To answer my questions from the top: Avigation is just a port of navigation for flyboys. The gapless BigEye is unjustifiable marketing nonsense. And yes, apparently those stuffed shirts in Geneva do know a thing or two, because the hype is nearly all justified.

Check out more chronograph reviews at The Watch Clicker 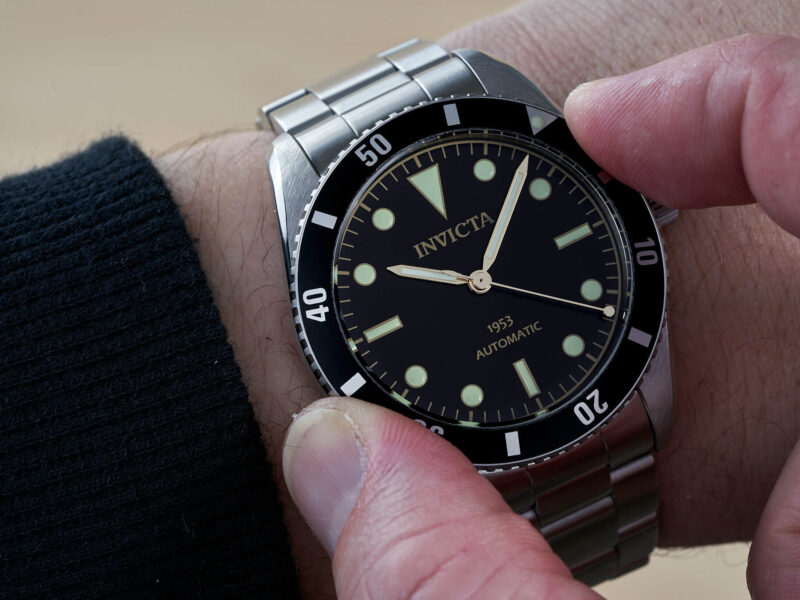 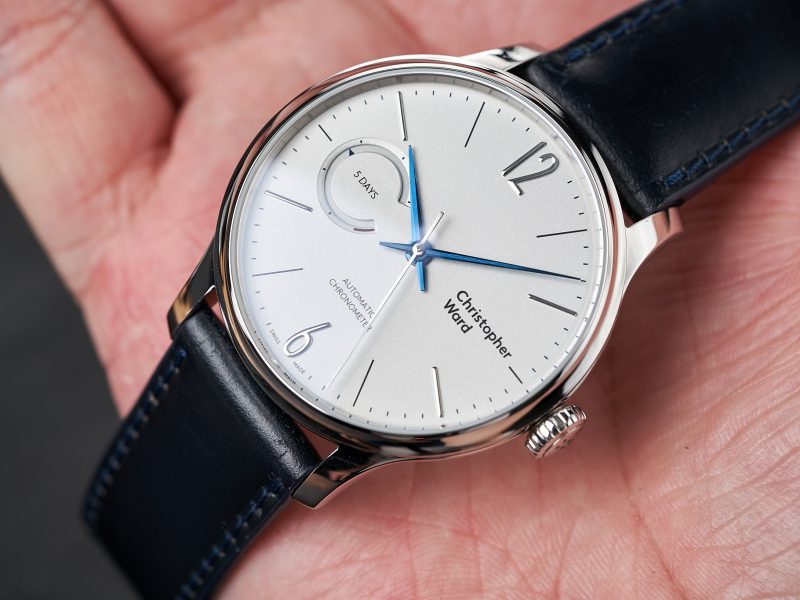 A modern dress watch with an impressive complication 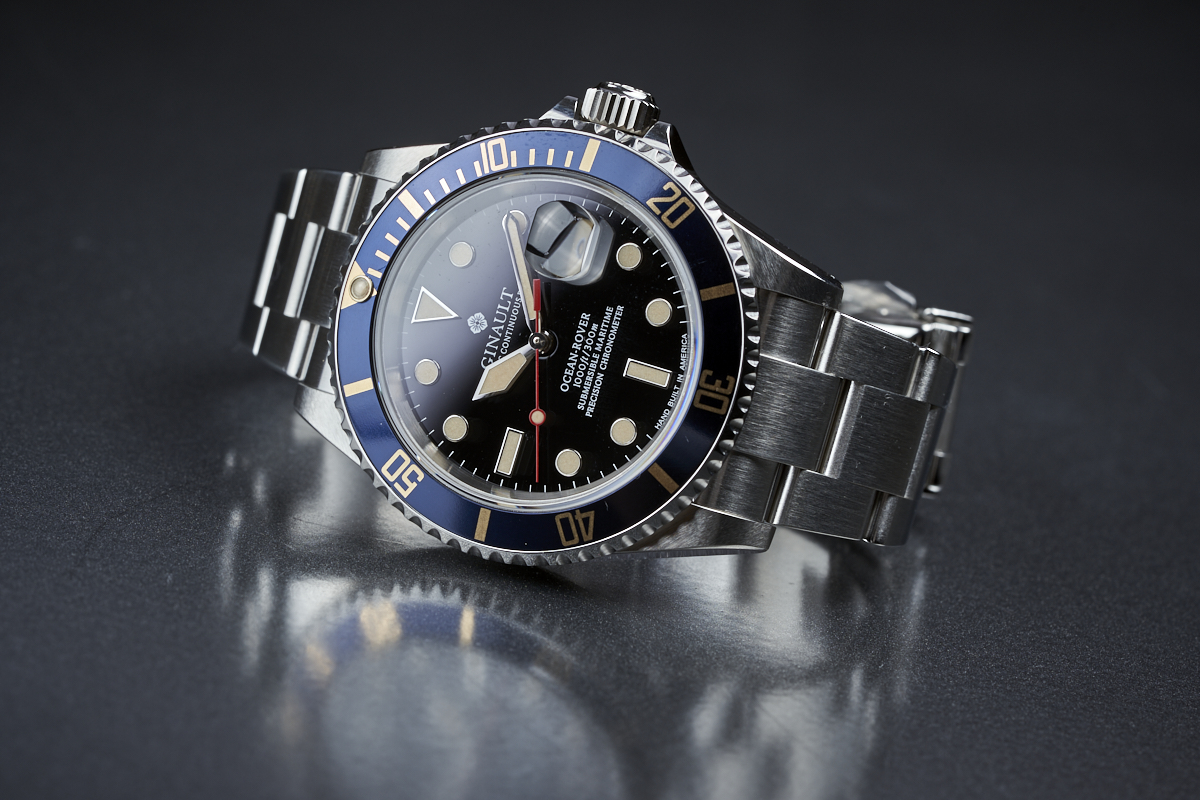 More than just an homage 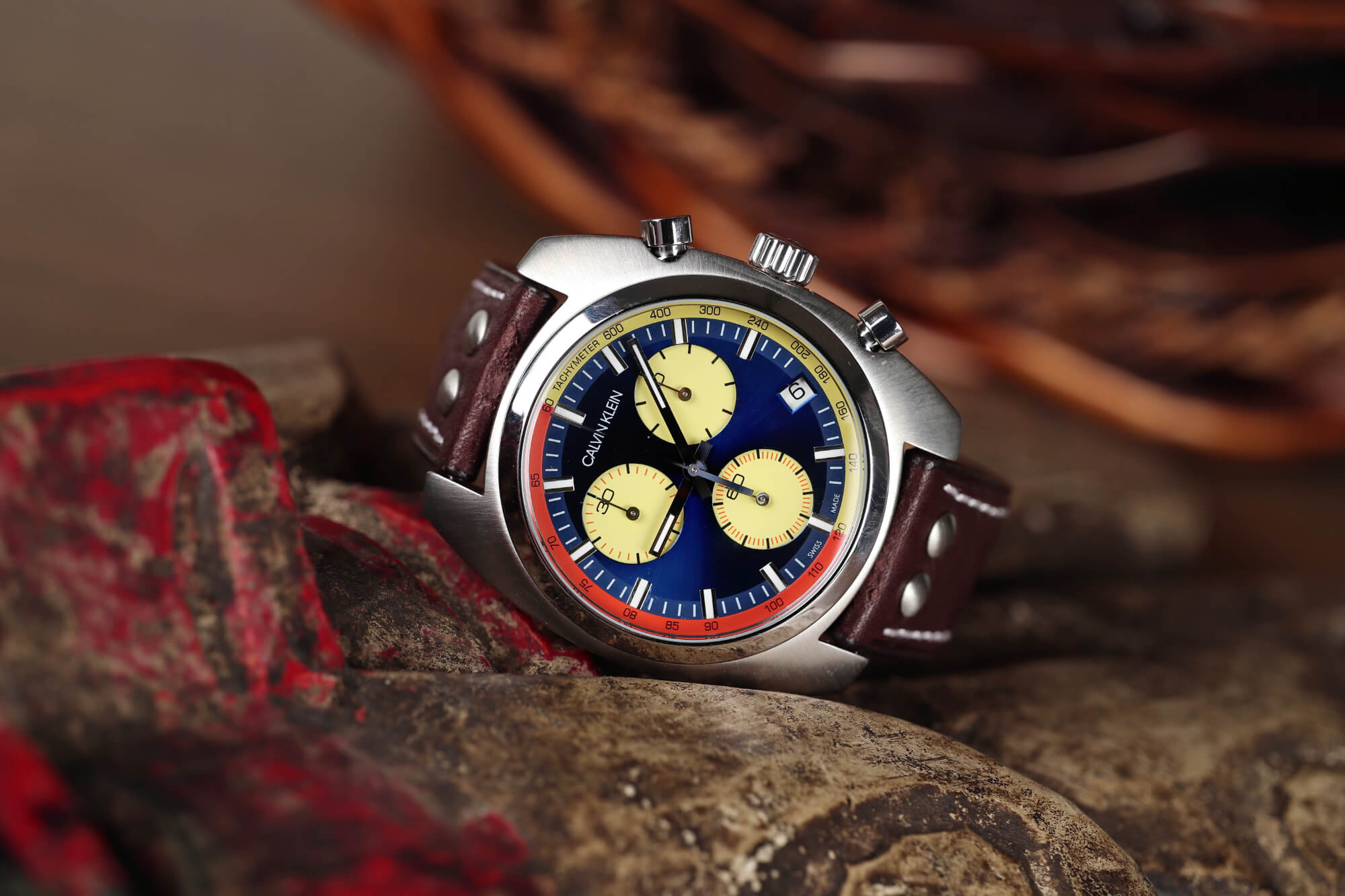 Nivada Grenchen brings back a classic from their back catalog 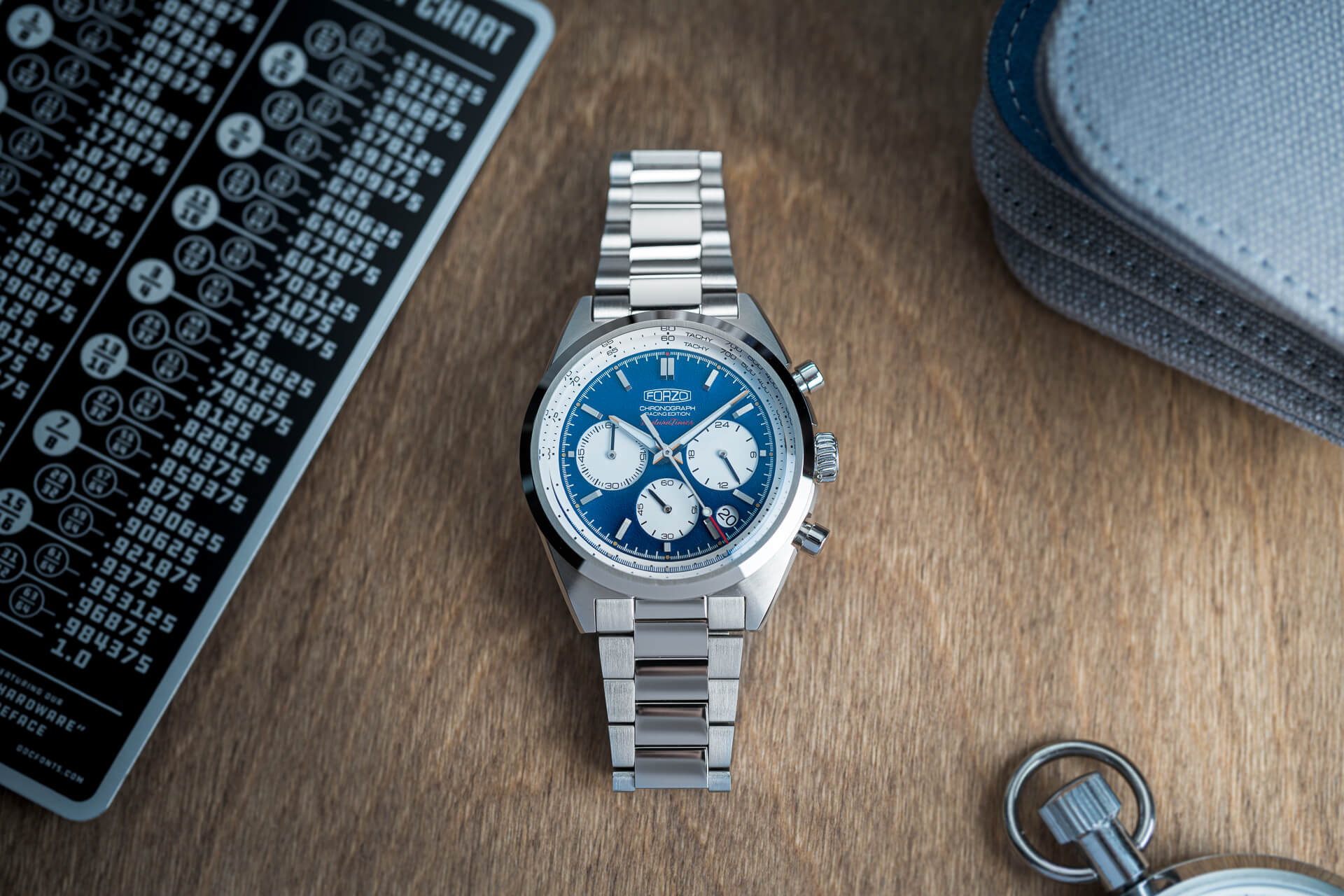