It was a gorgeous and sunny late winter evening to get an early viewing of the 2019 novelties by Hamilton. The event was called At the Heart of Cinema which celebrated Hamilton’s numerous appearances in film. Set in the Toronto International Film Festival Bell Lightbox building, the ambiance was perfect. 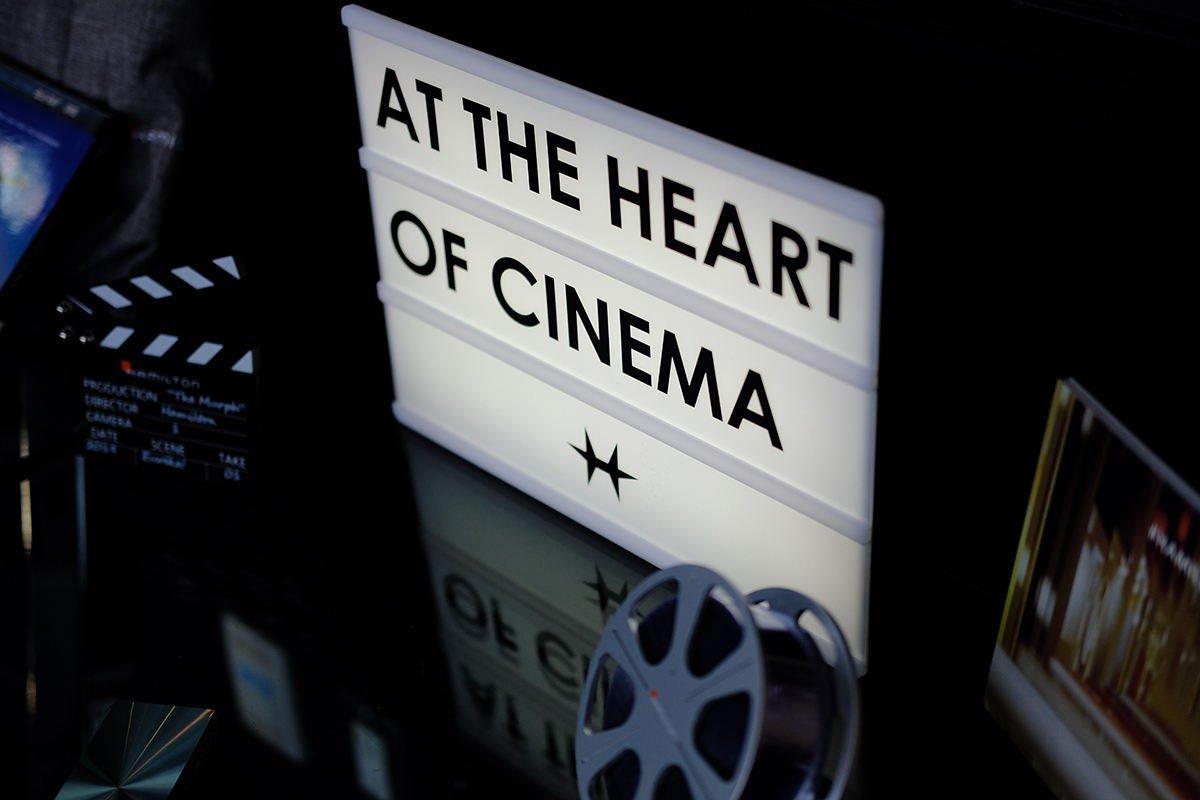 As we entered, we were not only greeted by an amazing and knowledgeable staff, but a masterfully crafted venue. As you can see, everyone was in for a treat. We’ll first start off with the star of the show and then make our way through the line-up to an often-overlooked area for brands, but one which can ultimately measure the quality of a watch brand as a whole. 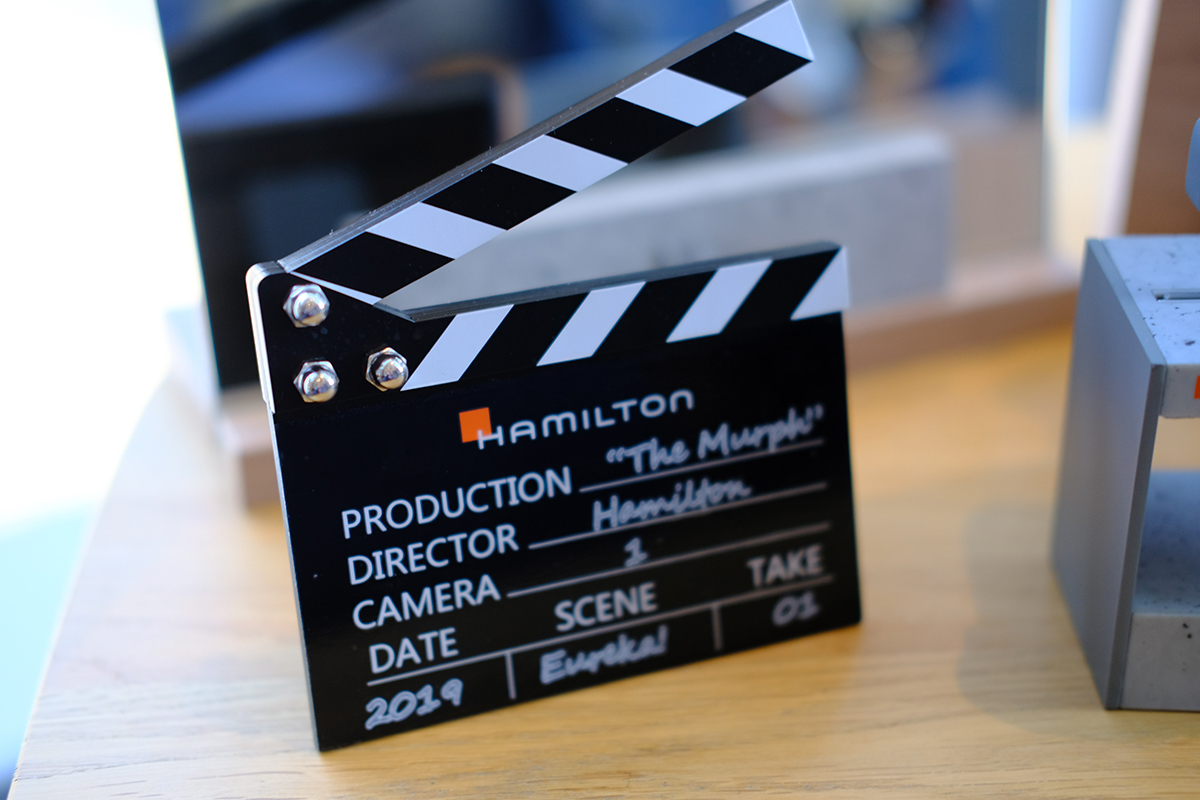 The star of the evening was the Murph which starred in the fantastic Christopher Nolan hit Interstellar. The watch gets its name from being gifted to the character Murph Cooper by her father. Since this movie is definitely worth watching, there’ll not be any spoilers to this truly wonderful movie here. However, the subtle lacquered seconds hand which has Eureka written in Morse code on it, is tied to the plot. The mesmerizing box was designed by the film’s product designer Nathan Crowley. Mr. Crowley could not be there in person but did make an appearance in video. This box was designed after a tesseract, which has a pivotal role in the film. This watch wears incredibly well and is a lot more beautiful in person. The polished bezel plays with the light very well to lighten the watch on one’s wrist. This was one of the things that was overheard most about this piece – how well it wore. 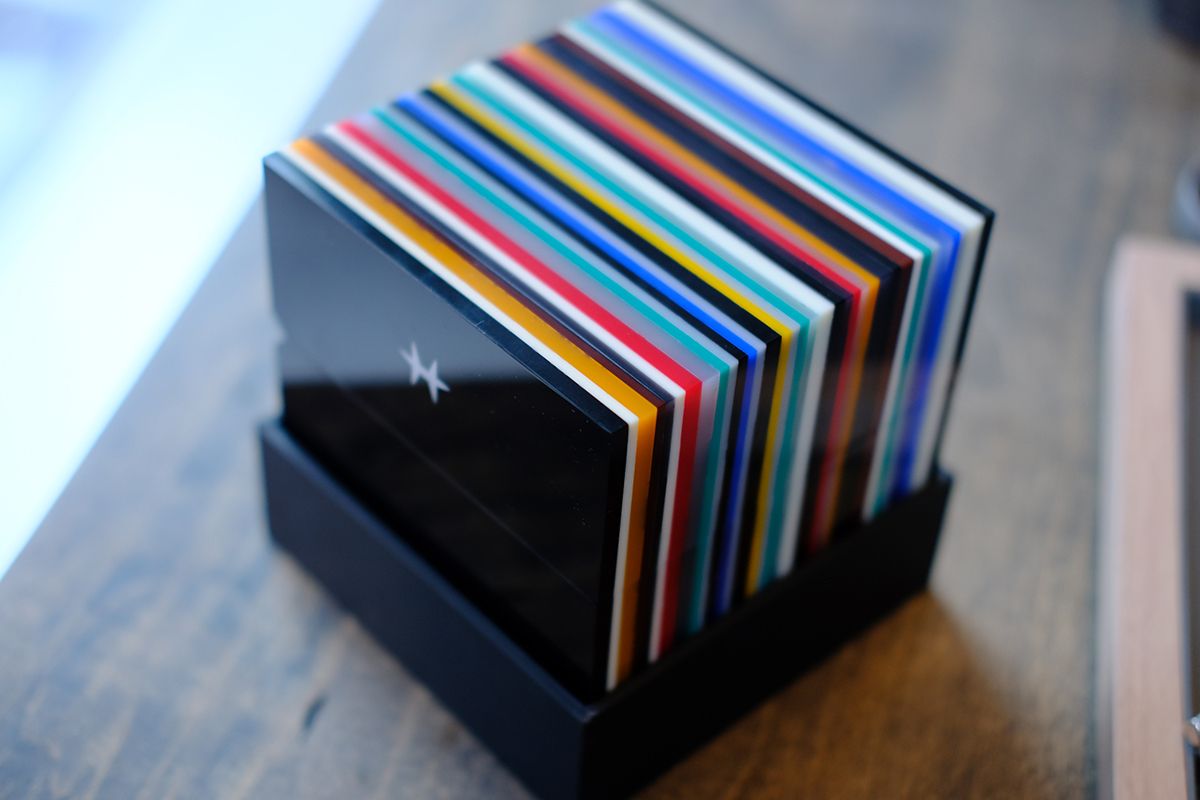 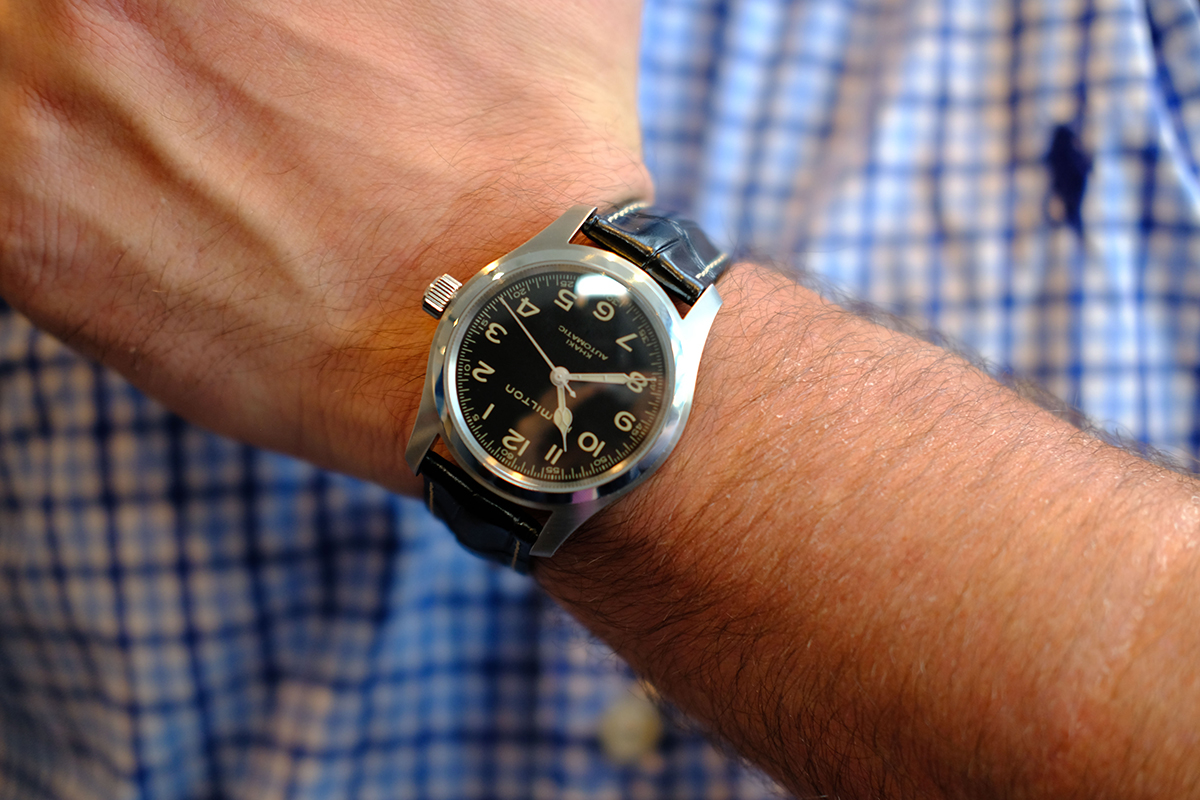 In 1957, the Hamilton Ventura took the world by electrical storm by being the first electric watch. Designed by Richard Arbib, this asymmetrical case was further popularized by Elvis Presley in 1961 in the film Blue Hawaii. Pictured here first is the 999-piece limited edition Skeleton Ventura. This watch is inspired by the recent Spiderman films as worn by the character Tony Stark. 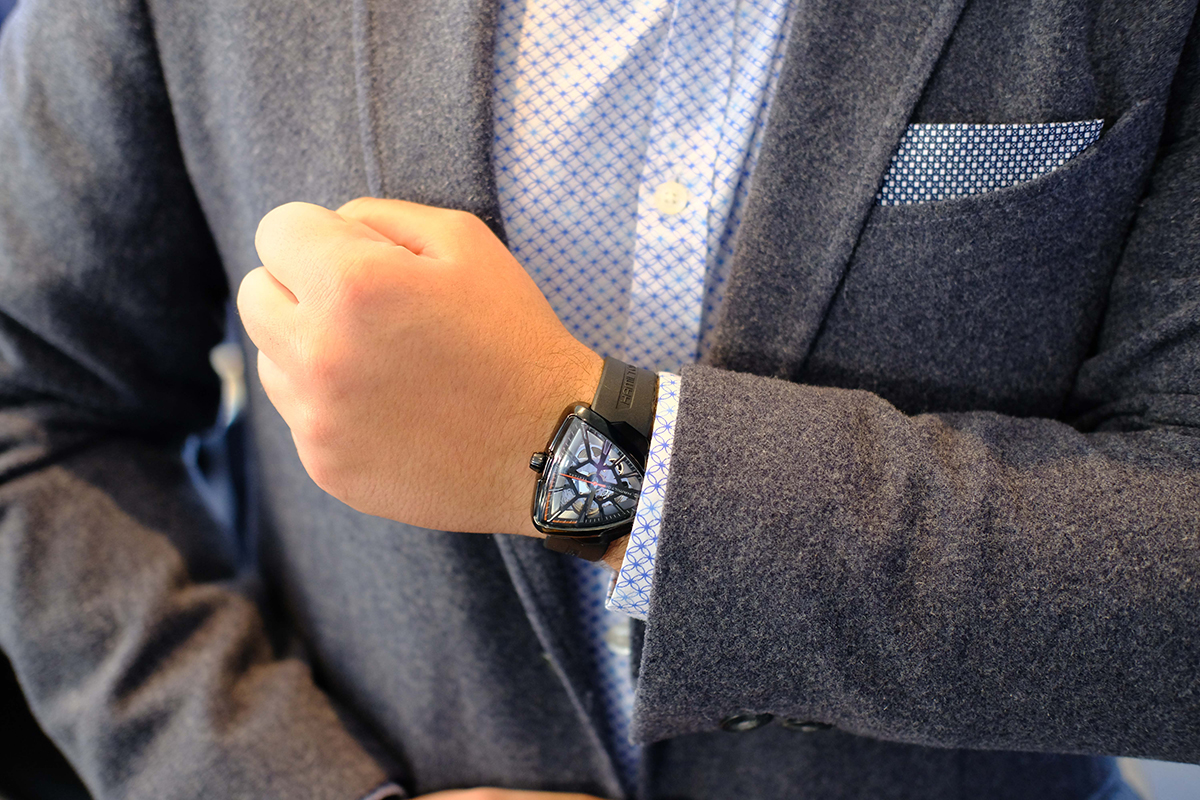 Also pictured here are the other new-for-2019 Ventura models: The Ventura Auto with its circular dial within the triangular case, the ChronoQuartz, and the Ventura Open Heart. Leading the industry toward watches being powered by an electric source, this Ventura proudly wears its mechanical heart on display. This 25-jewel movement pulses at a classic beat rate of 3.5 Hz. It also has the endurance to see a weekend’s sabbatical with a power reserve of 80 hours. The Ventura Auto with the circular dial, however, was an unexpected hit with the crowd, mainly people working in the media, and devoted watch collectors. 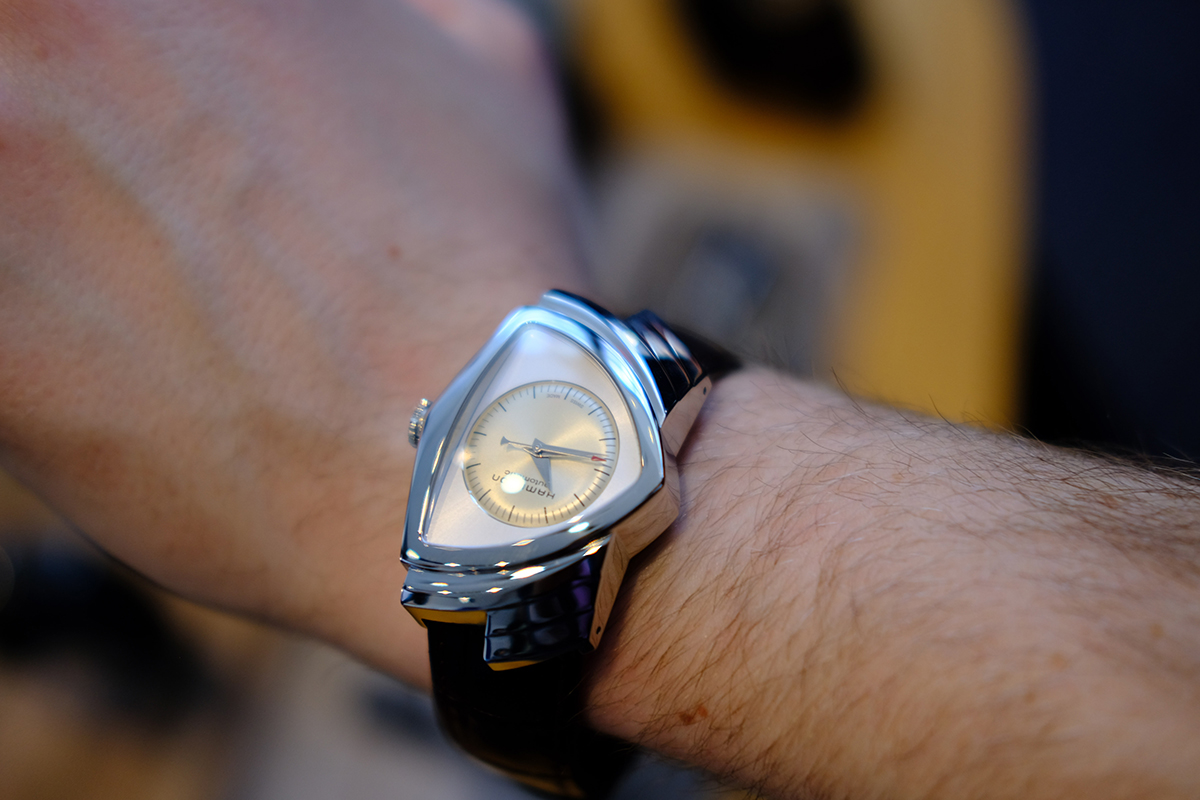 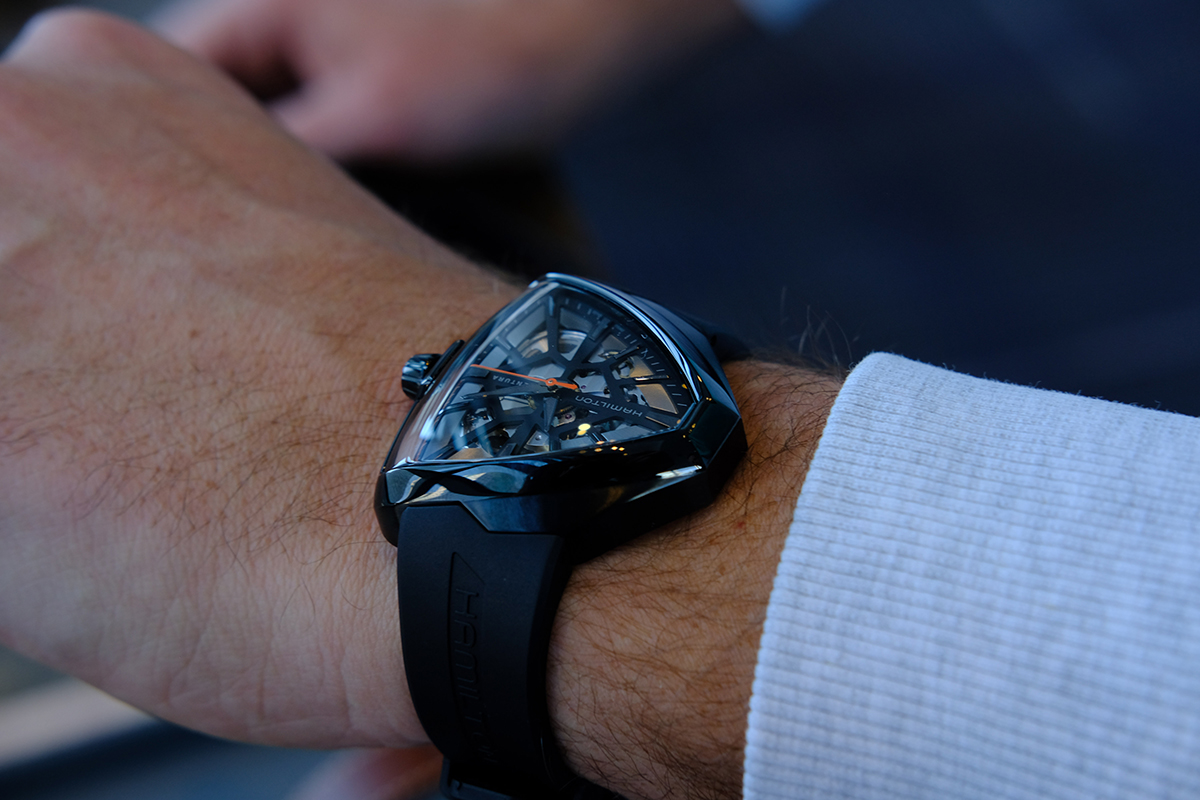 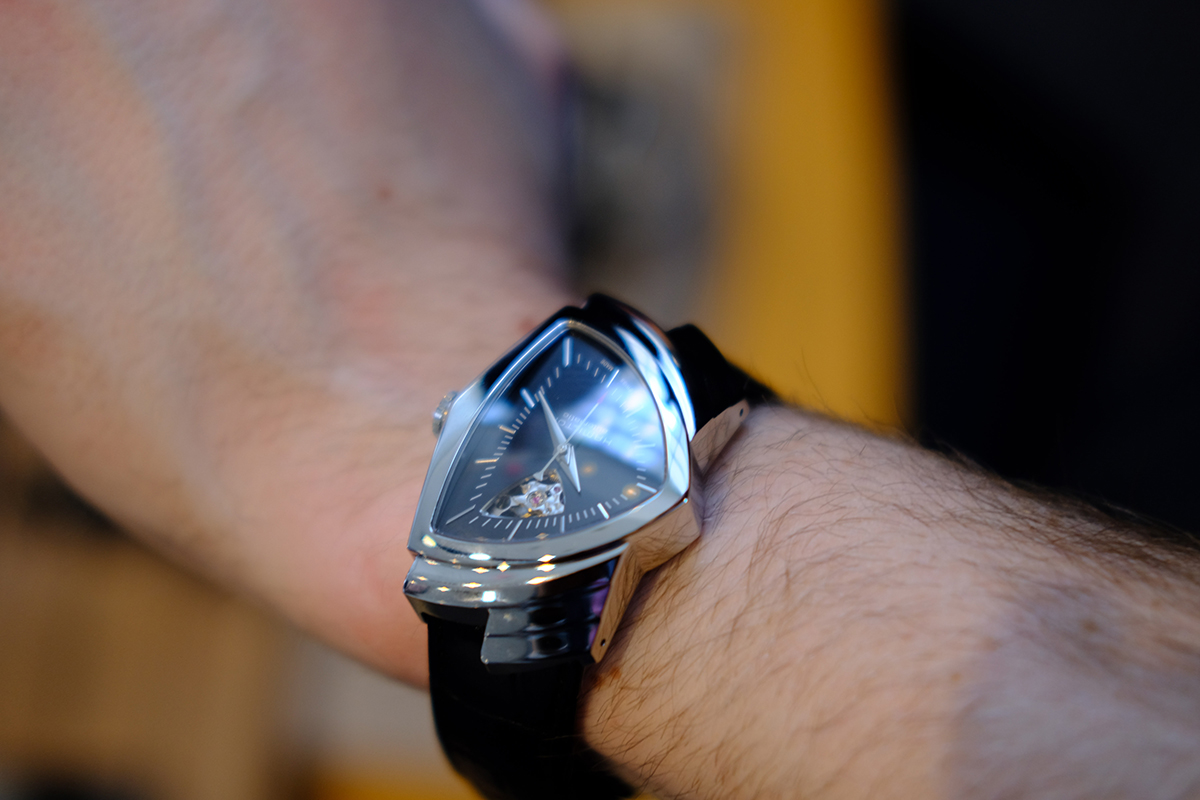 This year we were graced with the presence of the new Blue Power Reserve line in the Jazzmaster series. Elegantly versatile for any situation from day at the office or to a formal event, there is also the Thinline available for those who wear extra-tight cuffs or who desire a more traditionally elegant approach to their outfits. The Thinline Auto watches are a serious alternative to the Nomos Orion as well. Coming in at half the price, consumers can more readily find and try these watches on as well. Having a more modern movement and lumed hands also give this Hamilton watch a step up on the Orion. 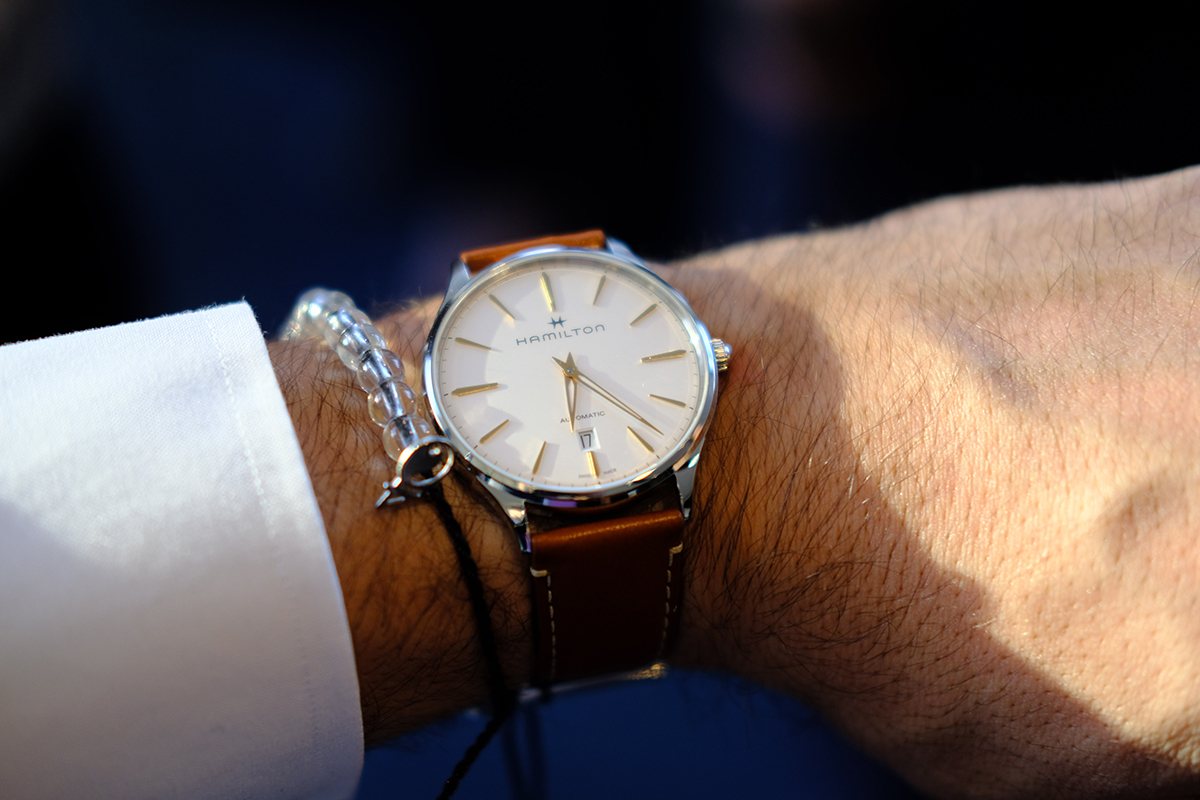 With its blockbuster panda-dialed release last year, Hamilton did not rest on their laurels. For 2019 the Intra-Matic features a soft blue dial accompanied by creamy beige chronograph subdials and accents. Many enthusiasts immediately pre-ordered last year’s Intra-Matic. They actually did so at an alarming rate. Those who did still wear them, which is saying a lot. Most collectors flip such watches as soon as something new catches their attention. This is not the case with the Intra-Matic. The soft blue with shades of French gray dramatically changes character depending on the lighting. 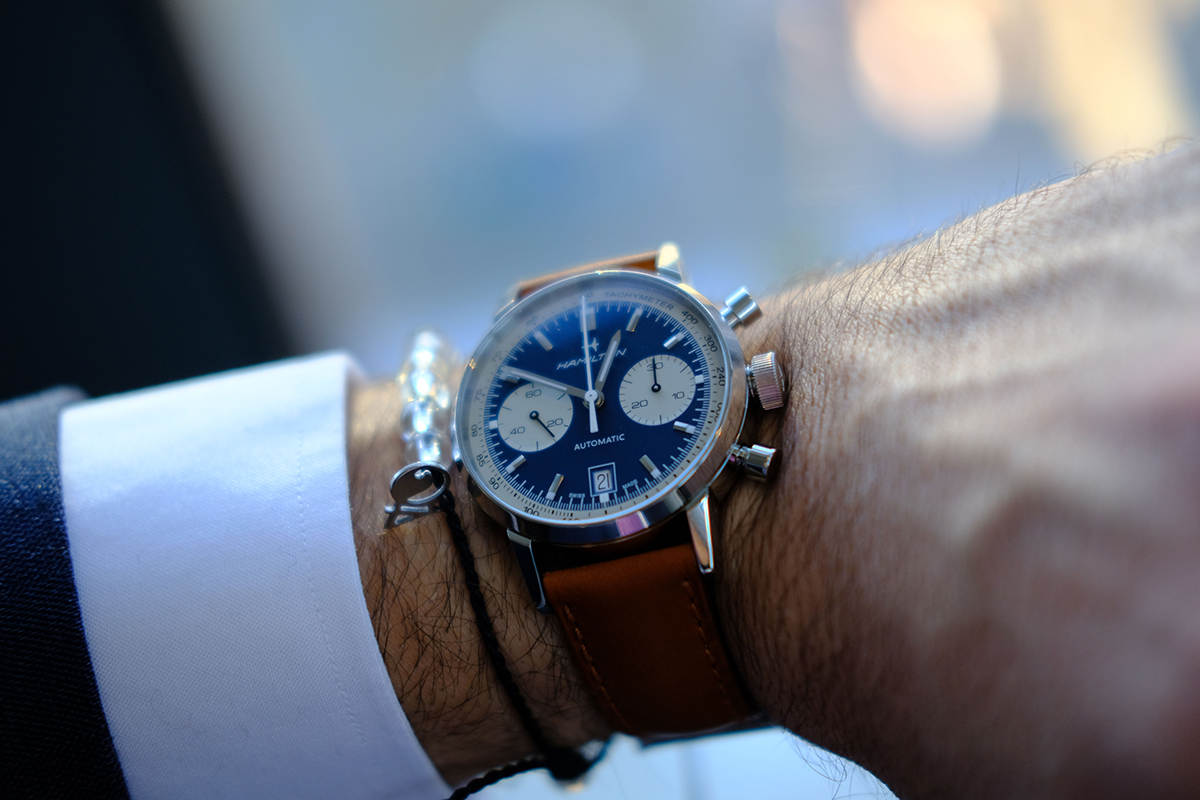 Mechanical watches personify the romantic relationship between humans and machines. This is especially the case with a manual-wind watch. Those who like to feel a direct connection with their timepiece and who have a higher appreciation for history naturally gravitate towards the Khaki Field Mechanical by Hamilton. Despite having classic sensibilities and robust construction harkening back to its origins in military service, this watch is thoroughly modern. These Hamiltons can now be had with a very modern movement boasting an 80-hour power reserve. This watch can also be had in three different dial colours – white, earth and black. 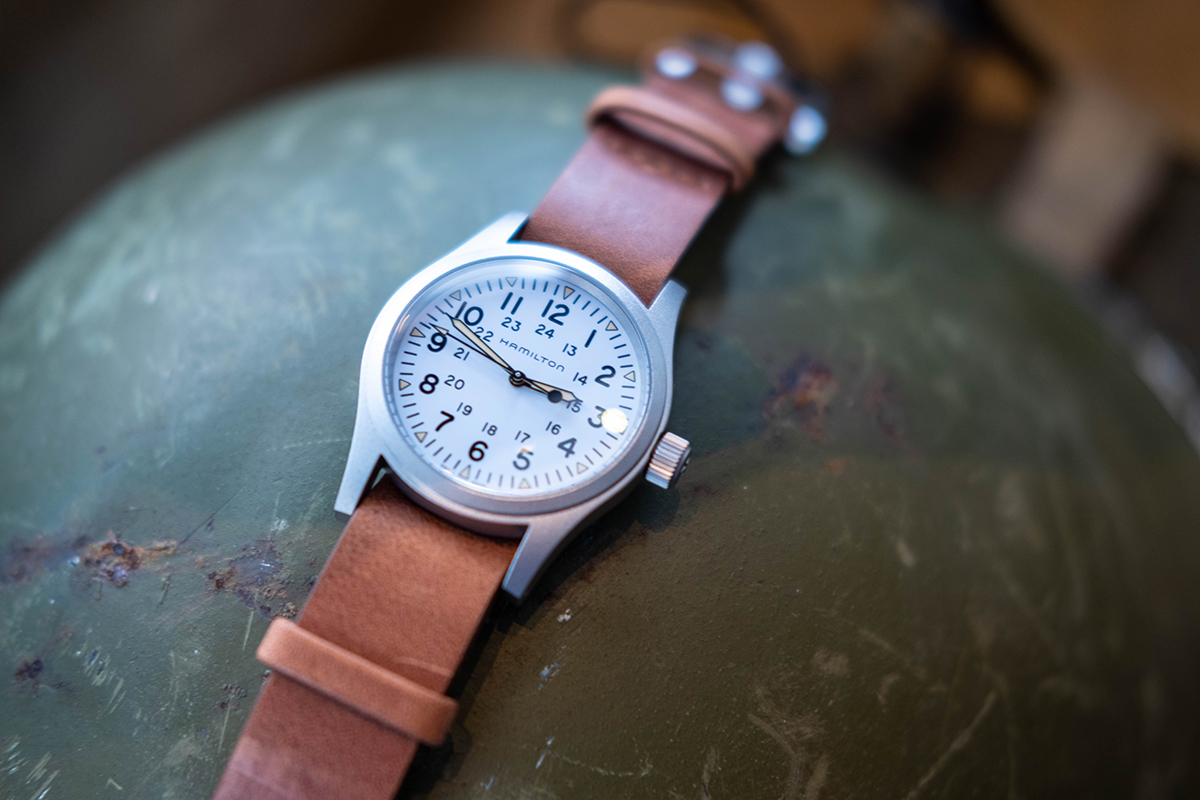 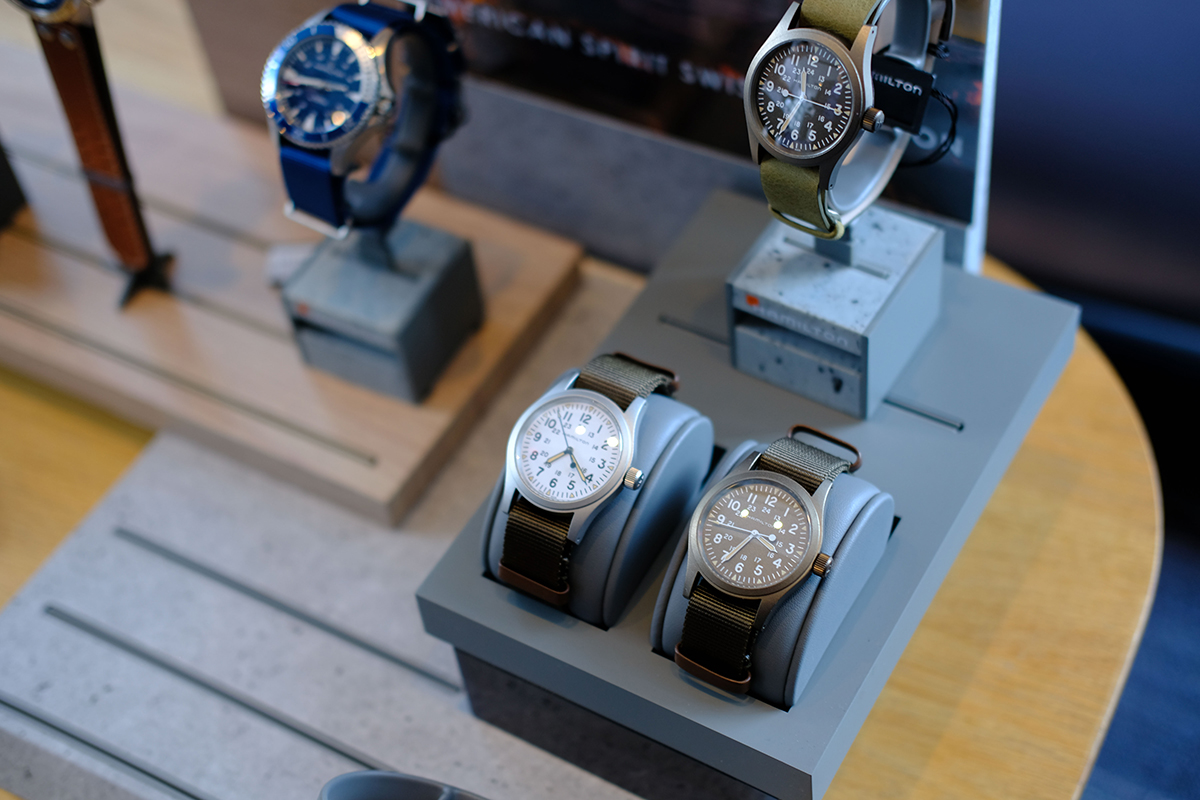 You can catch a glimpse of the new Khaki Navy Scuba in blue in this picture as well. Rated to a water resistance of 100 meters, this dive watch offers more than enough depth rating for recreational divers, who do not go deeper than 100m/333 feet into the realm of technical divers. You have a choice of three straps as well: a blue rubber strap, a blue NATO-style strap, or a bracelet. 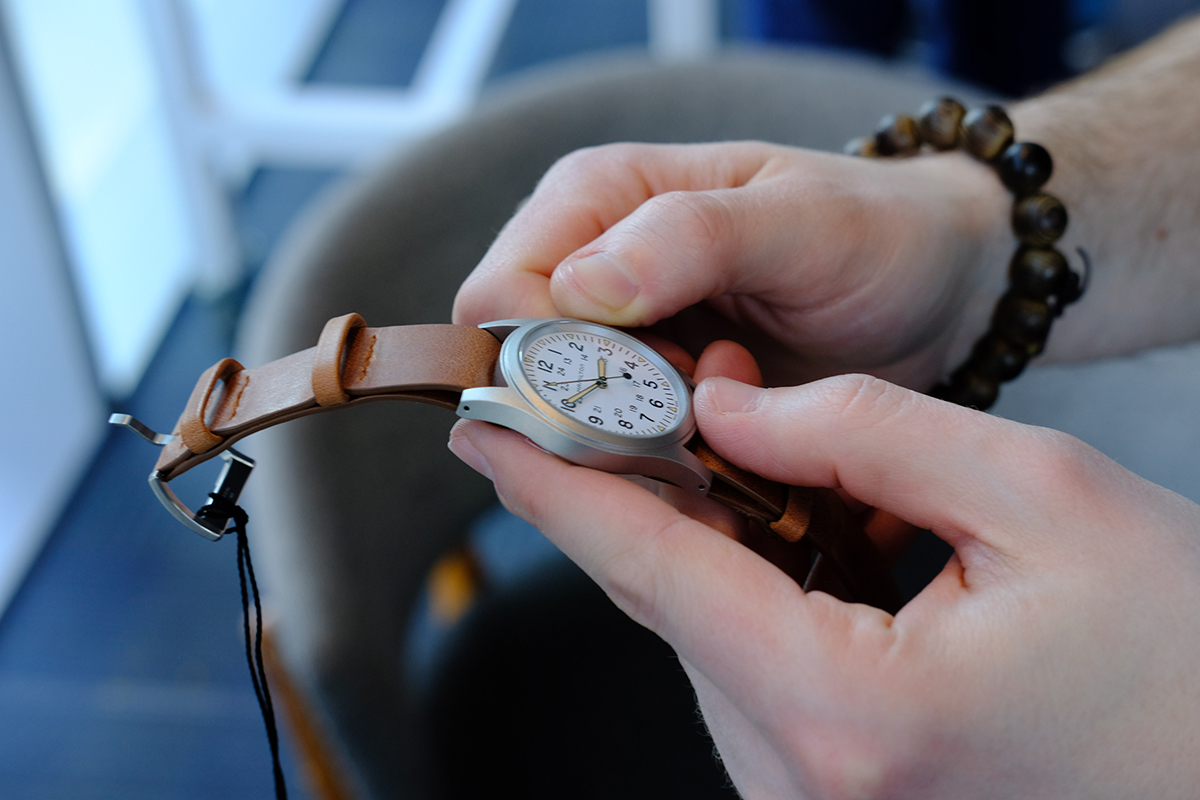 Though not one the new novelties, the Hamilton Below Zero was present that evening. I wore my beloved Hamilton and was pleased to see its presence on some banners. It was featured in one of the greatest modern science fiction movies, The Martian. The film was based on the fantastic book written by Andy Weir. For the movie, director Ridley Scott and prop master Noel Cowell were rumored to have personally picked this watch. Looking past the new offerings, they chose the Below Zero based on its aesthetics. It’s hard to argue with their choice. Even though I will never take it diving, the Art Deco styling and all-black design make this a unique and powerful watch. 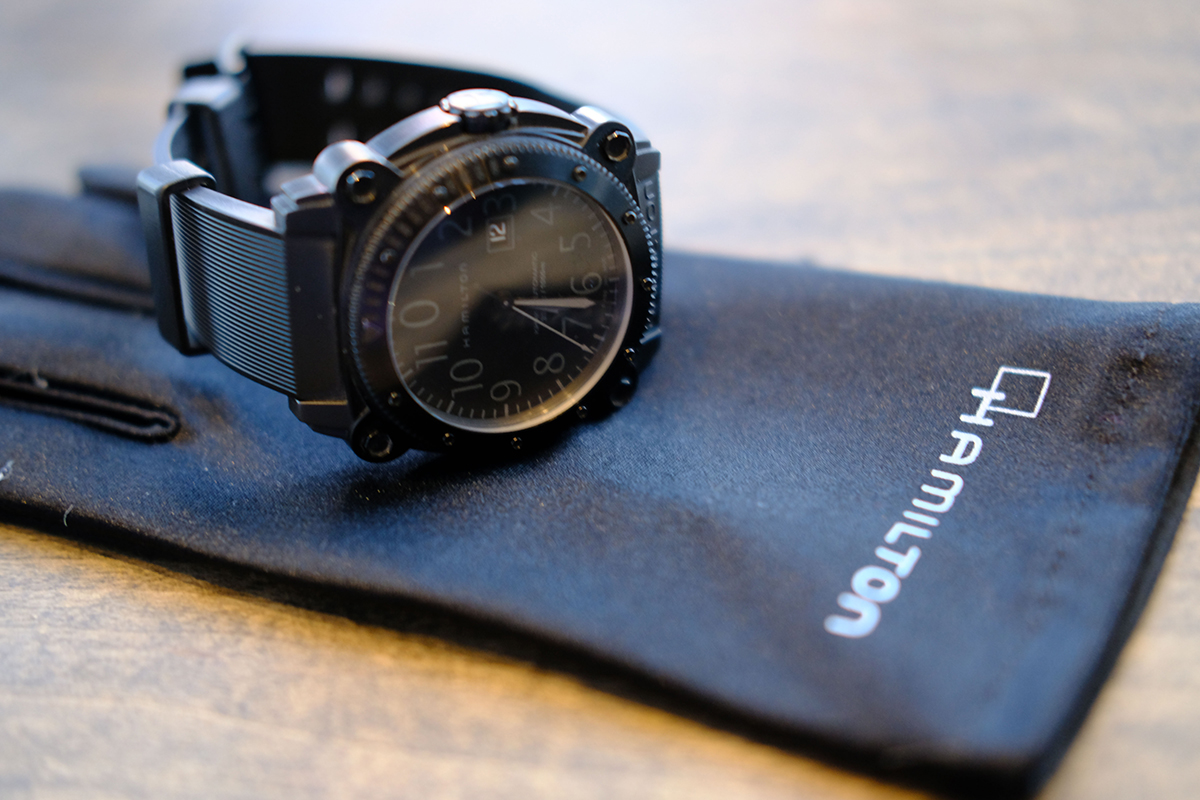 The Jazzmaster Open Heart is an example of Hamilton’s dedication to women’s watches. Welcoming all viewers with its skeletonized white mother-of-pearl dial, this is a unique timepiece. Not settling on a quartz movement, nor having a design simply reduced from a men’s model, this is how a women’s model should be approached. It is powered by the calibre H-10 which has wonderful 80-hour power reserve, and a unique design. Hands featuring Super-LumiNova are also a feature that other brands neglect on a lady’s watch. This gorgeous timepiece is obviously not all about function. There are 4 wonderfully placed diamonds applied at the 12-3-6-9 hour markers. This timepiece comes complete with grace, practicality, and a flare for rising above any occasion. 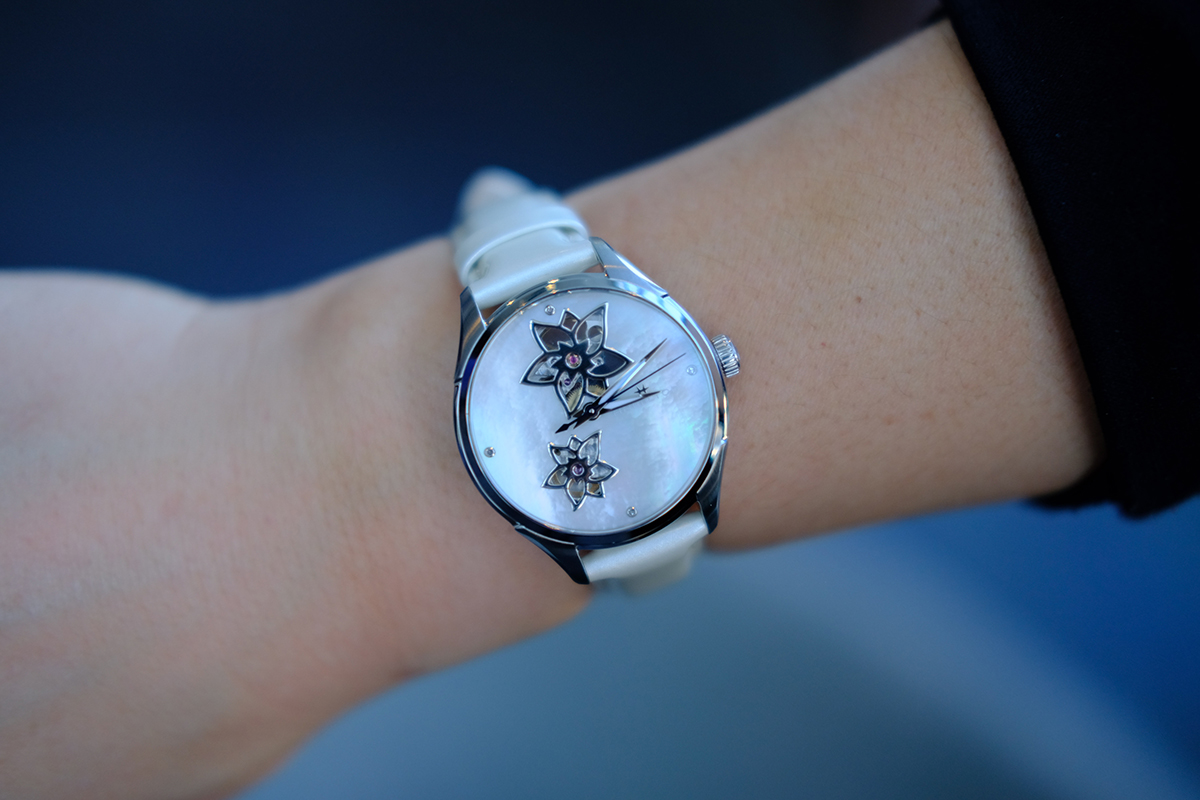 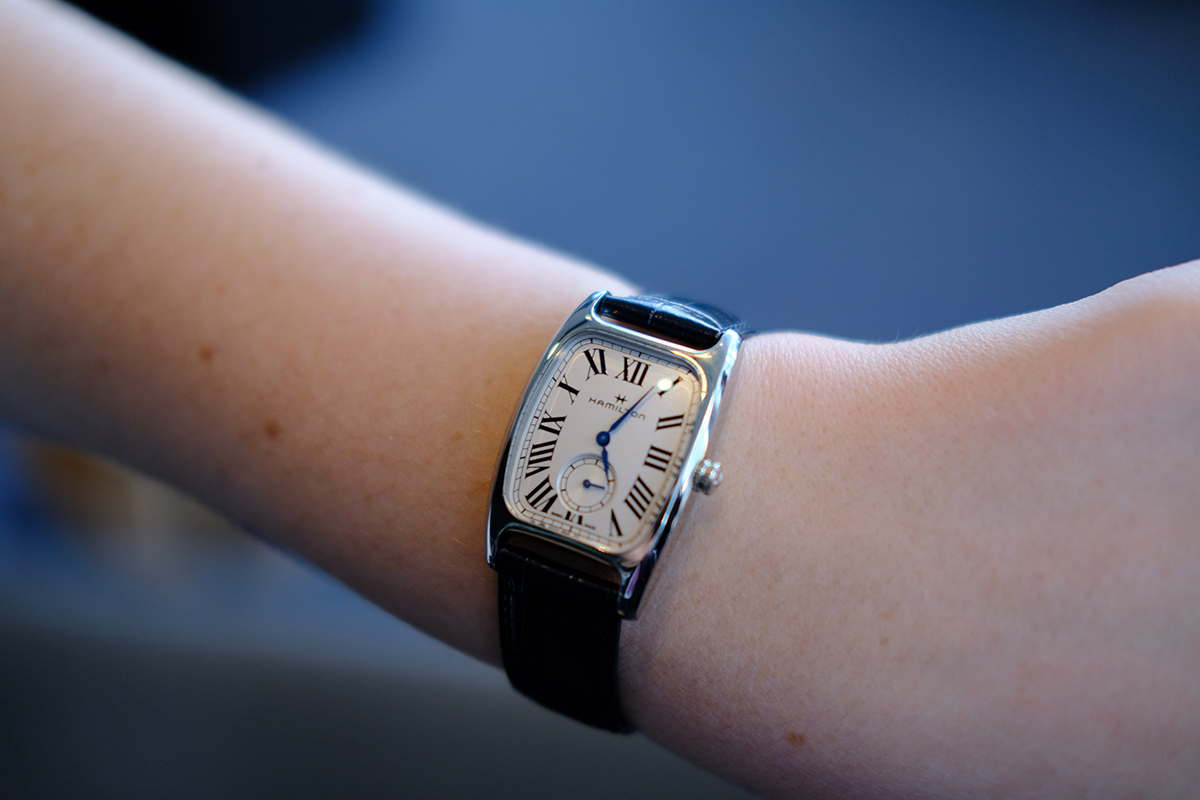 Though the focus was on Hamilton’s presence on-screen, most of the collectors walked away with a strong sense of direction for the brand. Being a brand under the Swatch Group is not an easy task. Not only are the brand’s offerings strategically placed within the larger portfolio in regard to price, but also of identity. When most brands are leaning on the historical past, Hamilton seems to be looking forward. While not abandoning their heady history in military service, these pieces all have a very modern feel to them. Beyond their designs, the emphasis on functionality is greatly appreciated. Features such as extended power reserves and details such as luminous hands on lady’s watches will go a long way for the brand. The Hamilton going forward is much more than what was previously perceived by collectors. It is no longer a brand which focuses on product placement. It is no longer a brand which relies on its history for inspiration. It is a brand which successfully marries tradition and modern techniques at an approachable price point.

Though it is true that Hamilton leads the way in thoughtful product placement in cinema, they are also a brand with a formidable line-up of classic, modern, and highly functional timepieces. 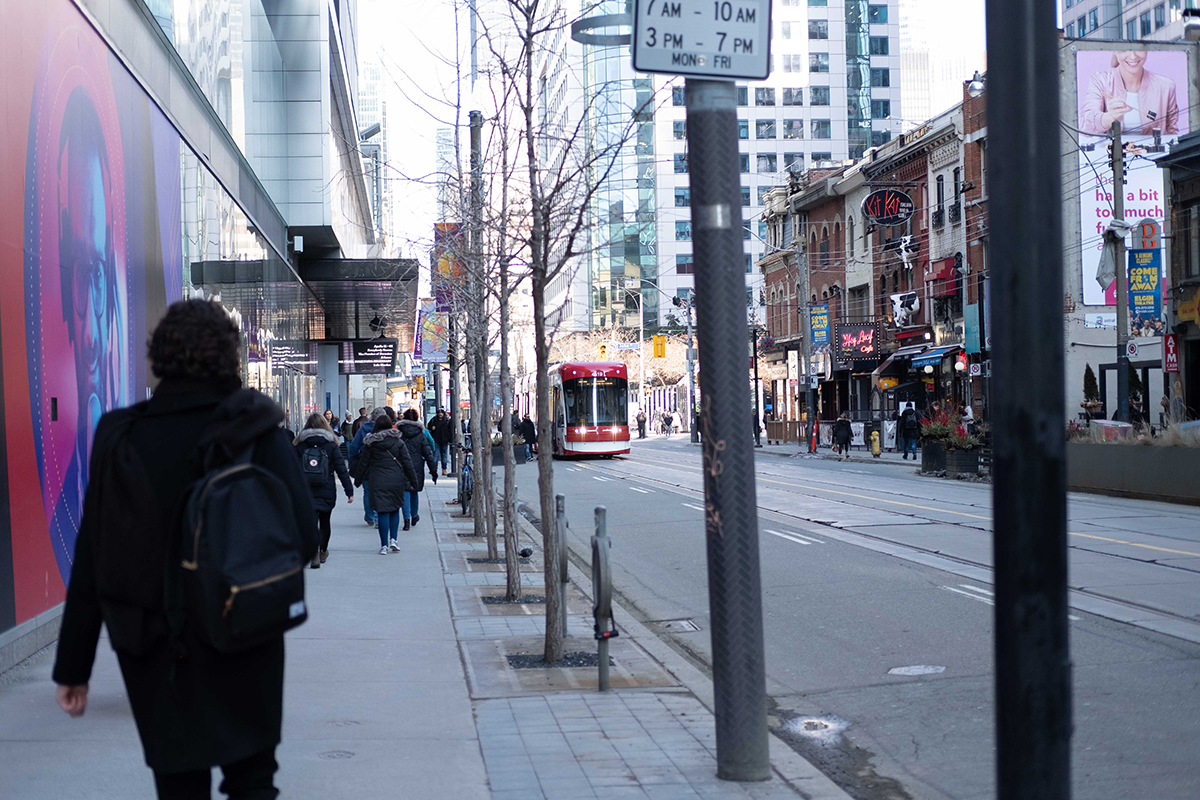 About the Author Furry Wrist Abroad 24 posts
Furry Wrist Abroad is a Master Scuba Diver residing in Canada who loves all watches that perform well as tools within their intended environments. With an uncompromised approach towards ascertaining the value and worth of a watch, whether this be a dress watch, racing chronograph, or a dive watch, all companies are held to account for their design choices and no allowances are given when the act of time-telling is undermined for market-driven or design reasons.
[email protected] 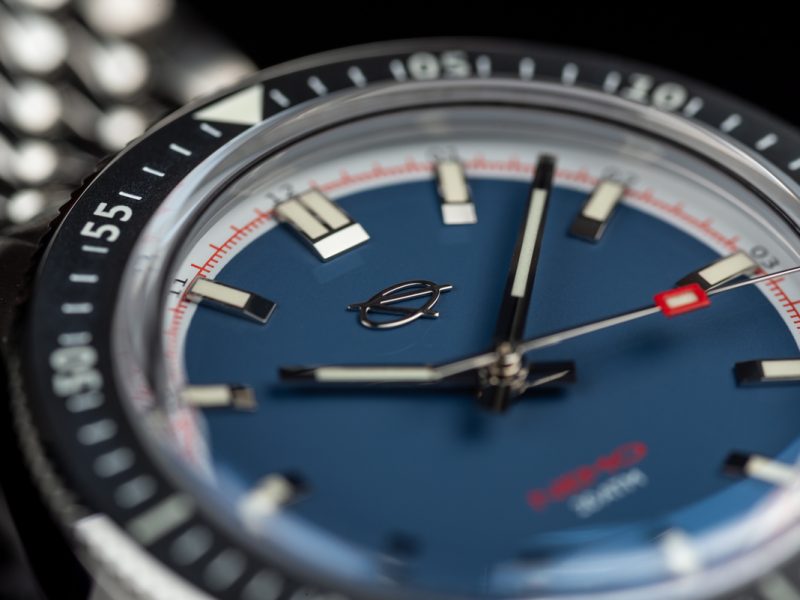 As comfortable as your favorite pair of jeans 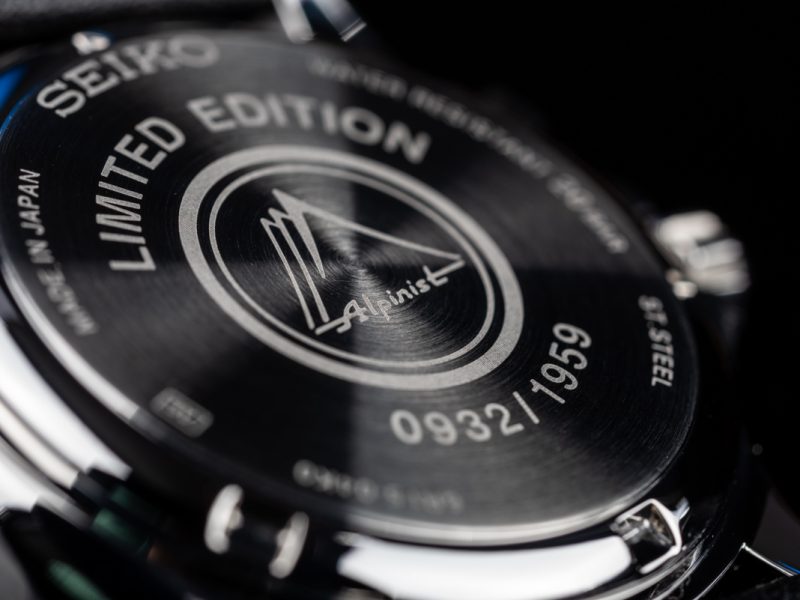 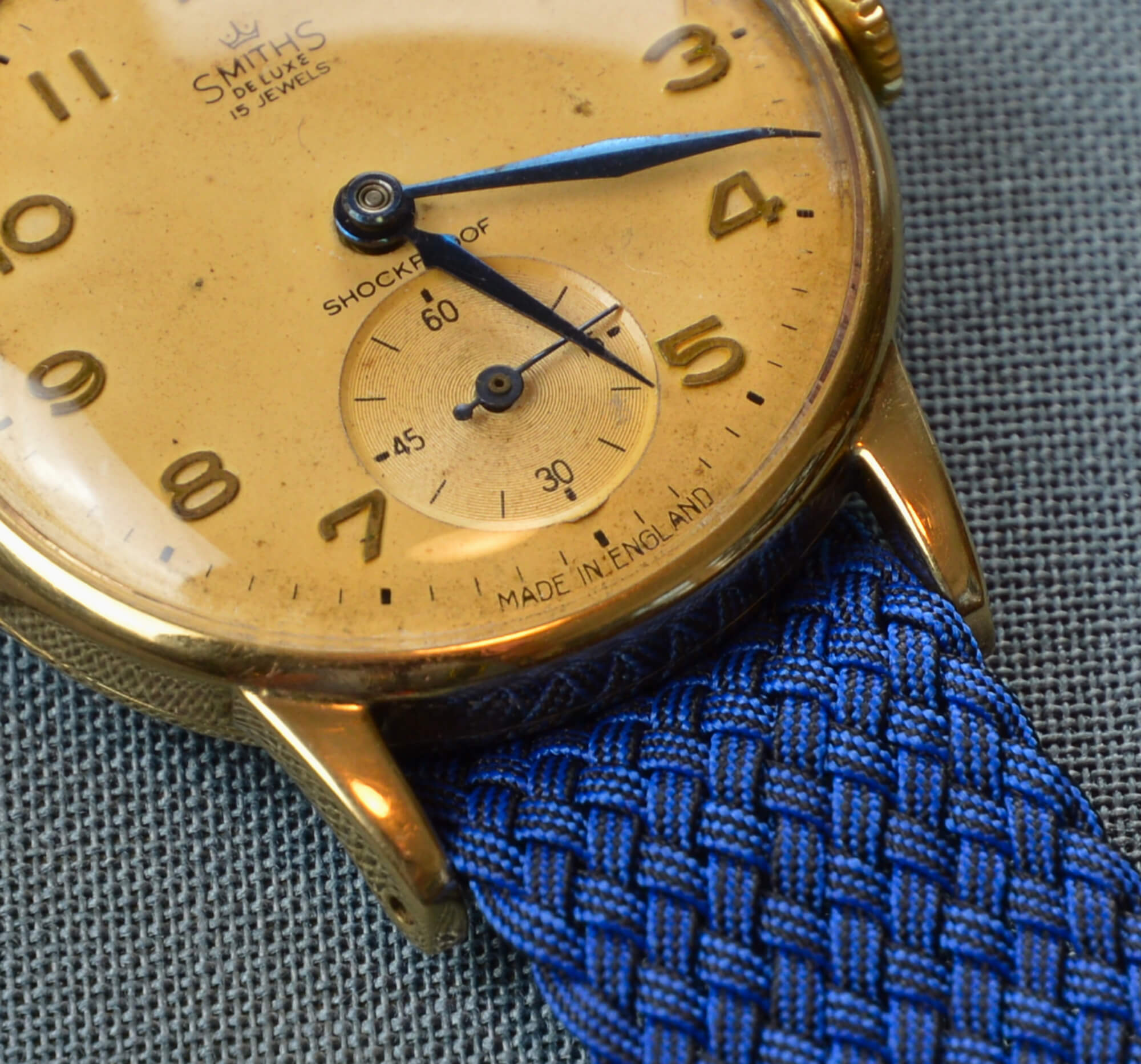 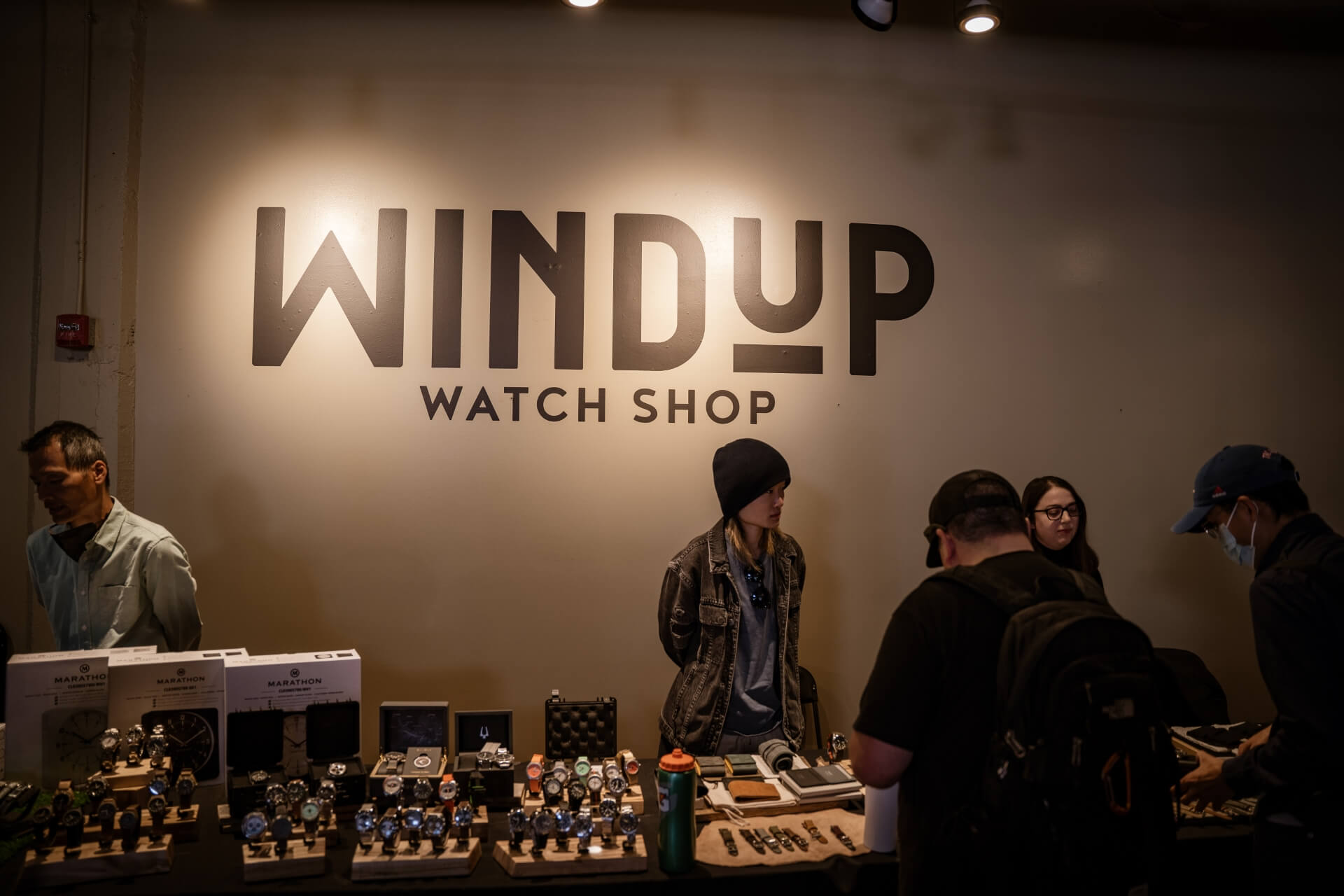 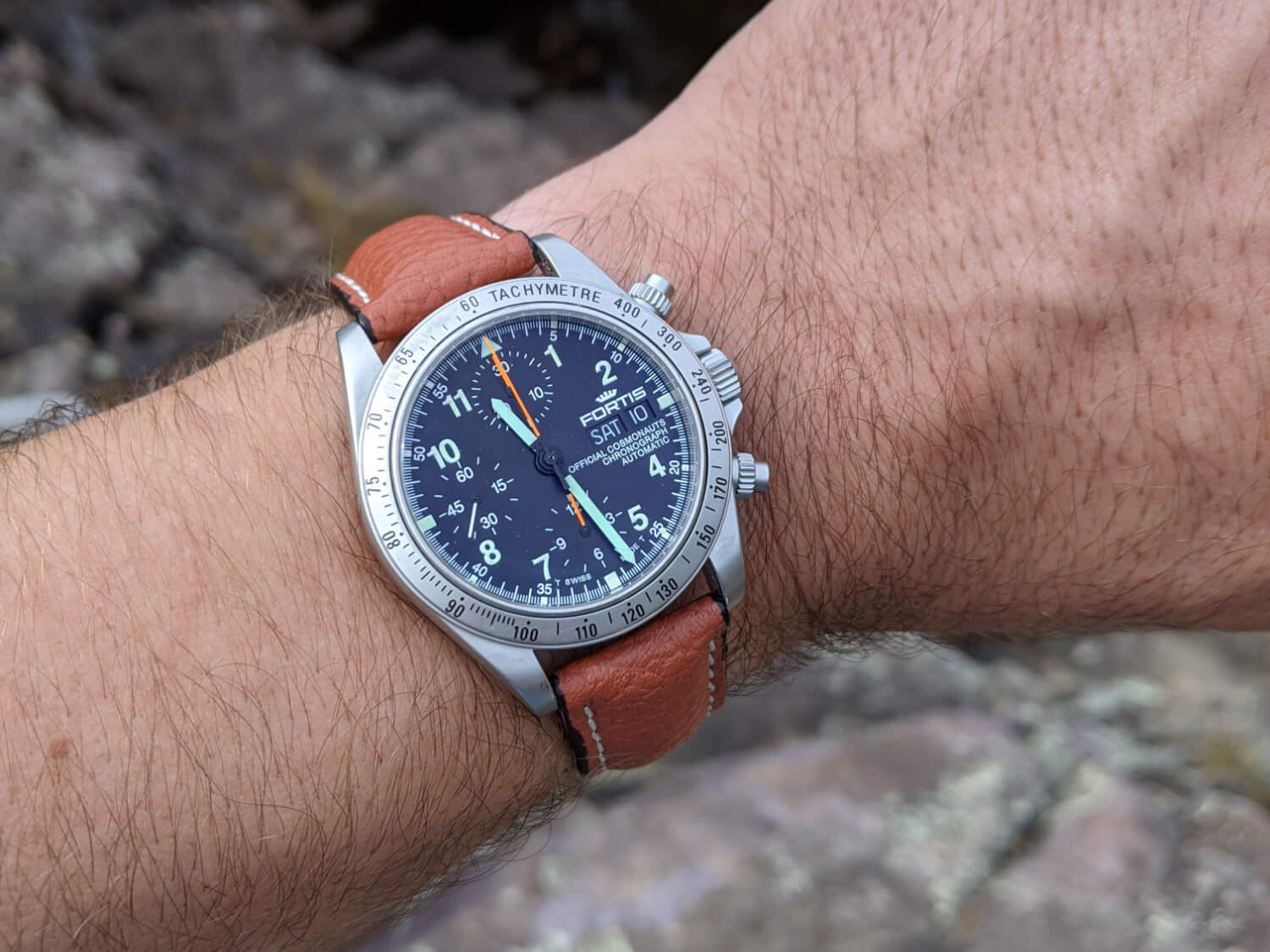 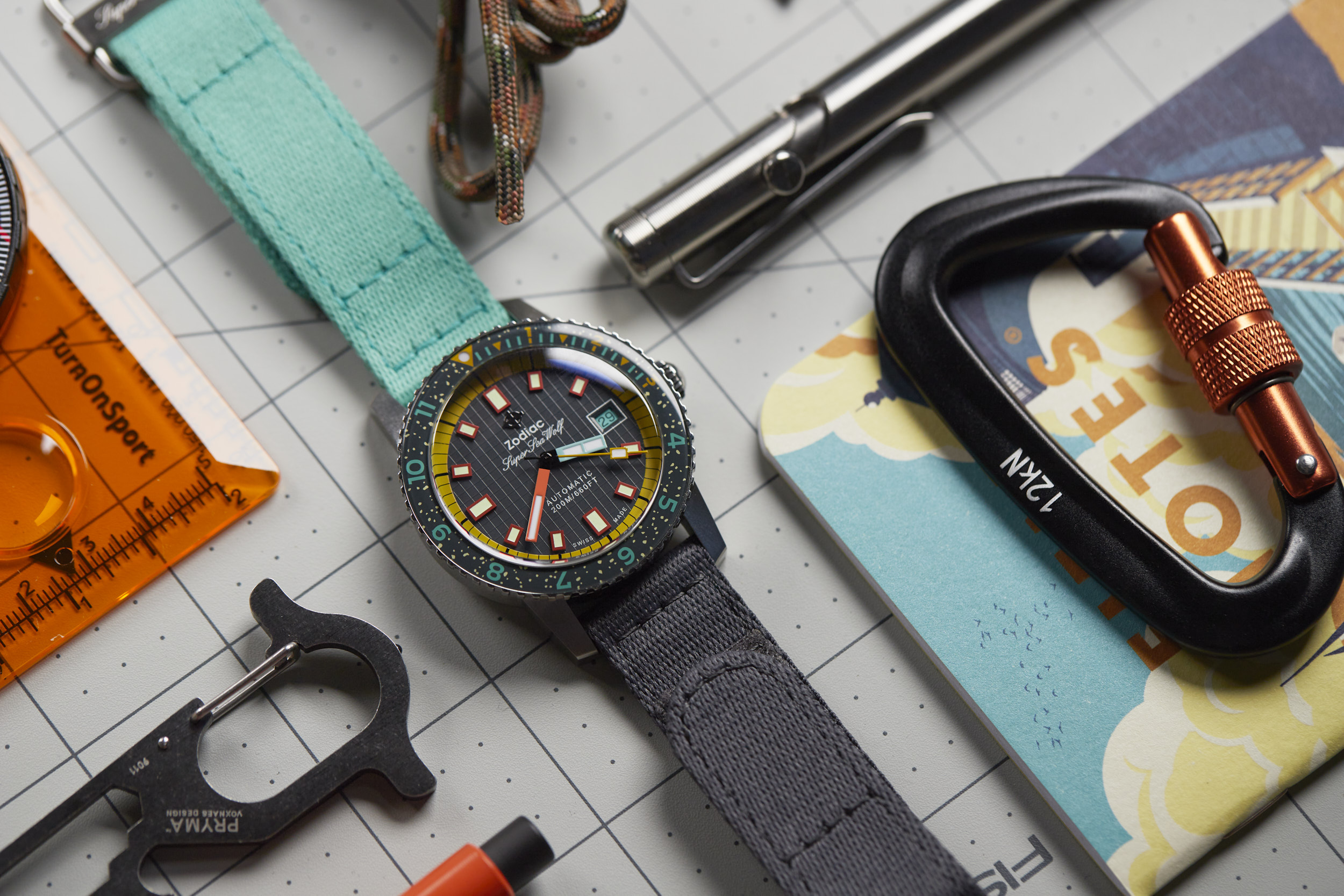 Worn & Wound and Zodiac bring back the 90s