The affordable watch world is drowning in a wide array of tool watches, whether they be divers or GMTs or pilots. These kinds of watches make money because they often offer a “cool” factor beyond three hands, and that’s a great way to pull in someone who may otherwise not be ready to spend over $200 or so on a watch—it’s all about feeling like you get a bang for your buck. And it’s no wonder that debut models are often some kind of tool watch. So it is with DuFrane Watches, who releases its Waterloo as the fourth model in its lineup, following a diver, a pilot, and a GMT.

Between you and me, I’ve not been the biggest fan of DuFrane’s prior offerings. To my eye, there’s always been something just off, whether it be the dial or the handset or the markers. (Have I actually tried any of them on? No. Do I have a platform where I get to voice my opinions anyway? Yes.) But as soon as I saw the Waterloo, that changed. I’m partial to cleaner, dressier watches, and the Waterloo from DuFrane is just that. Also, I’m a sucker for a layered dial with some texture. At a glance, the Waterloo is checking a lot of boxes for me. 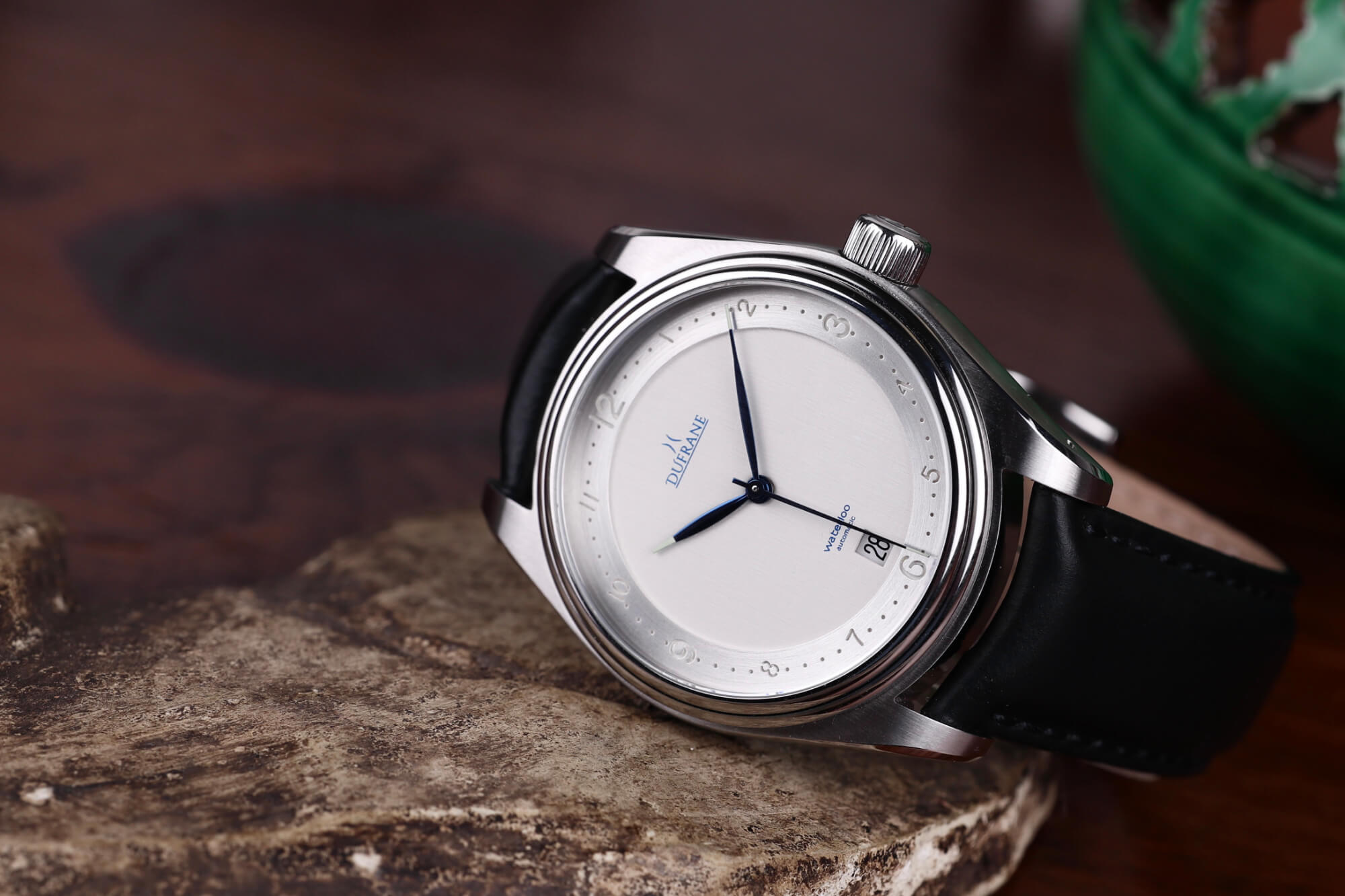 Inarguably spot-on dimensions on a very familiar case style make the Waterloo easy to wear. The modern sweet spot for most watches is about 39mm, especially if you’re talking about a pared-down dress watch such as the Waterloo. While the case features limited curvature, its 47mm lug-to-lug makes it unlikely that anyone will find this watch too large. At 10.4mm thick (8.8mm for the quartz model), the watch at times feels like it’s not there, and easily slips under any shirt cuff. 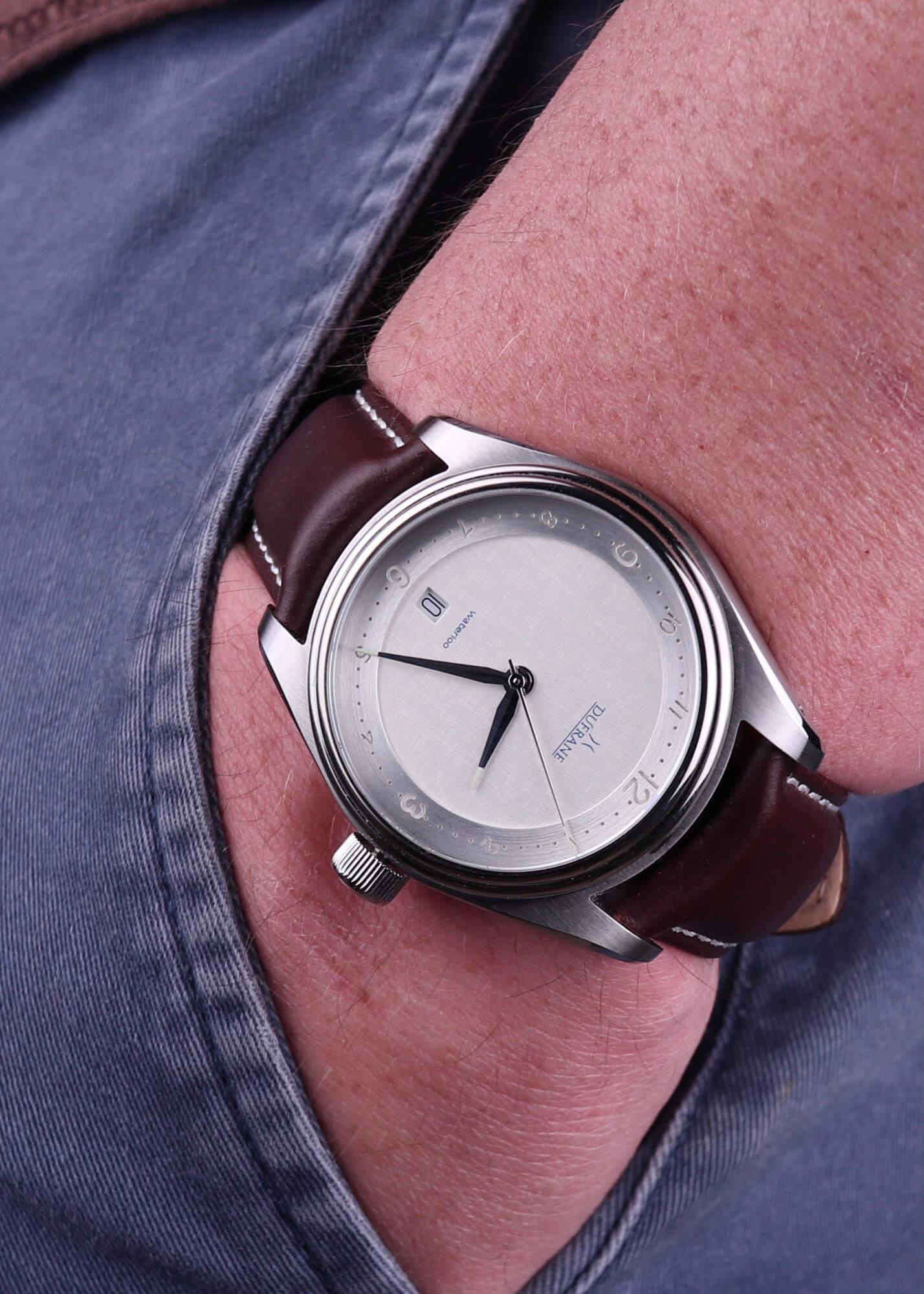 I mentioned the case is very familiar, and that’s because it very strongly resembles that of the Rolex Datejust. It’s hard to argue with the simplicity and elegance of this case design. And given how ubiquitous it is even among non-homage pieces, I don’t hold it against DuFrane for choosing the style. The case shape and dimensions are unaided by the stiff stock strap, but this is in turn mitigated by drilled lugs and a second set of (undrilled) holes for your own straps. 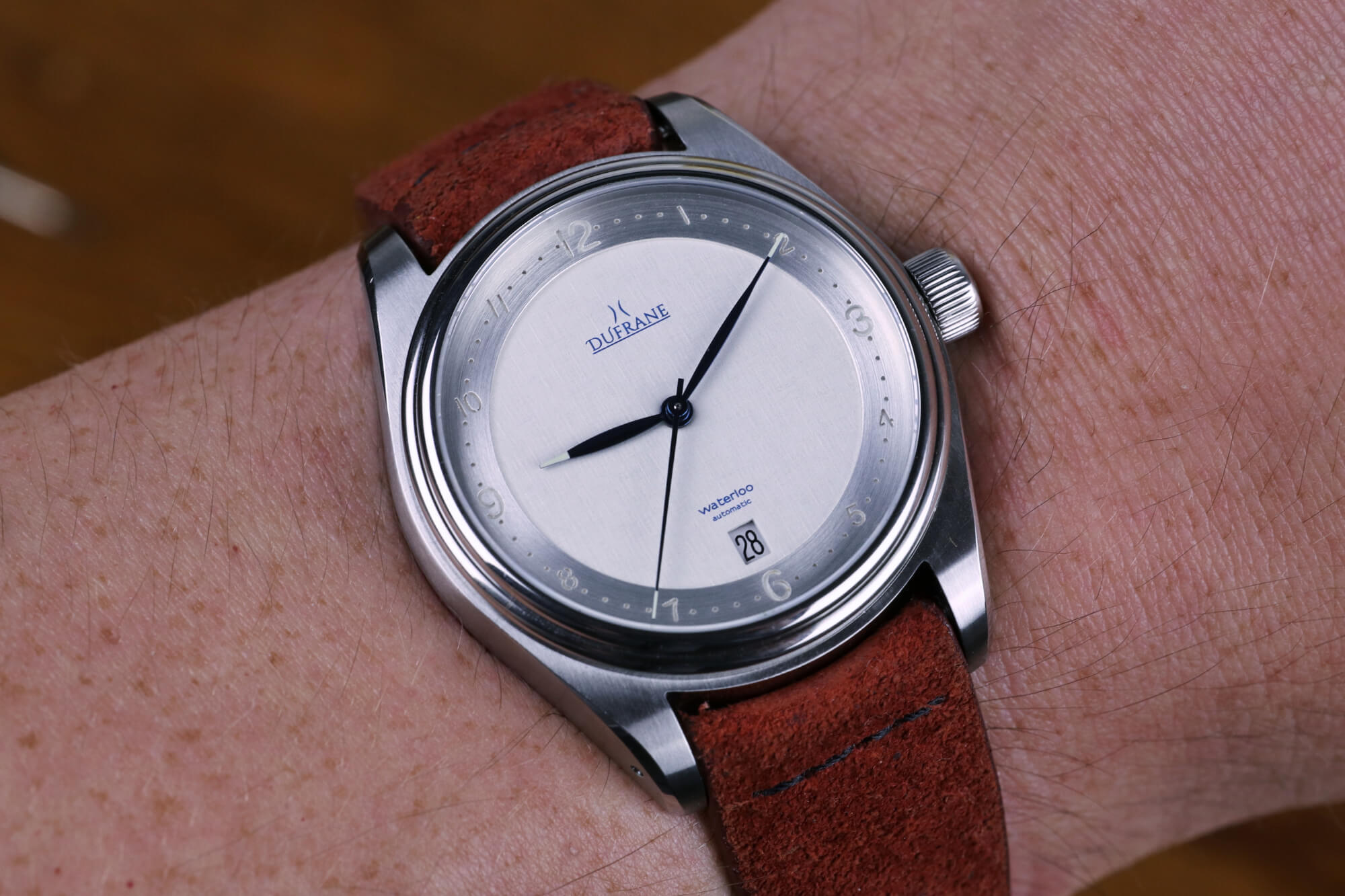 The dial and its surrounding stepped bezel are all original, though. The contrast between the linen dial, polished hands, and brushed chapter ring is enjoyable every time you look at the watch and allows for some great light play. The digits in the brushed chapter ring are subdued and elegant, but at times they can get lost, especially when caught in the light. A somewhat more prominent 12 o’clock wouldn’t have hurt.

DuFrane has offered the interesting option of either a Swiss automatic Sellita SW200-1 or a Swiss quartz Ronda 715 movement. The quartz Waterloo is thinner and cheaper while forgoing blued leaf-style hands in favor of a classic polished alpha handset. They certainly aren’t the first brand to offer a single model in quartz or mechanical (TAG Heuer, Chris Ward, Straton, Goodspeed…), and the move can broaden a model’s appeal and accessibility without significant additional upfront costs to the company. 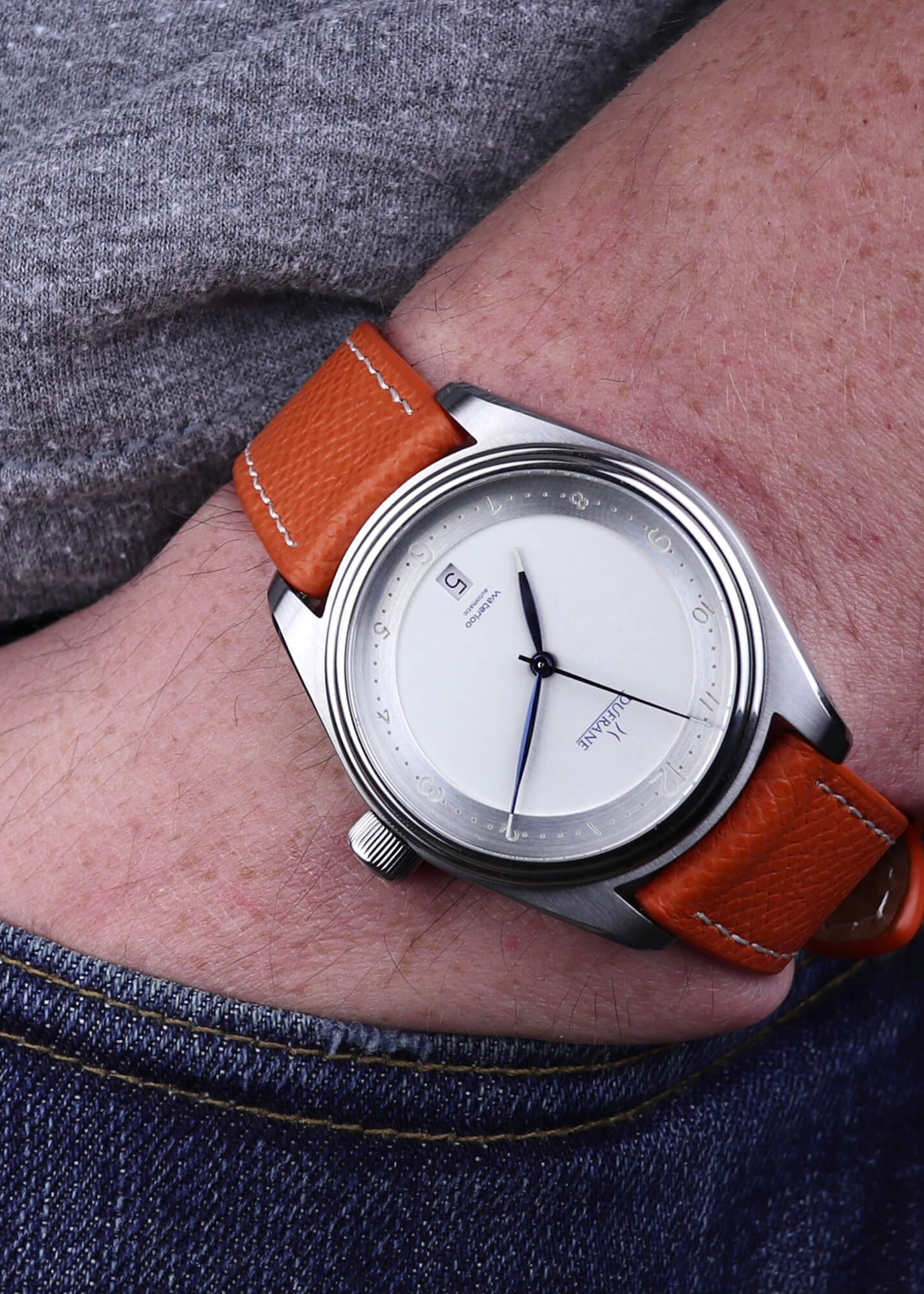 The Waterloo dial is filled with texture and layers, and it brings life to this decidedly dressy model. The brushed chapter ring is raised off the rest of the dial and features milled cutouts for the hours and minute plots. The cardinal hours are slightly enlarged and feature Super-LumiNova C3. That lume is a bit dimmer than I’d prefer but remains readable and is matched by the tips of hands. Both the blued hands on the mechanical and the polished steel hands on the quartz feature the lumed tips, though I think the contrast provided by the blues make it the better option, never mind the movement. 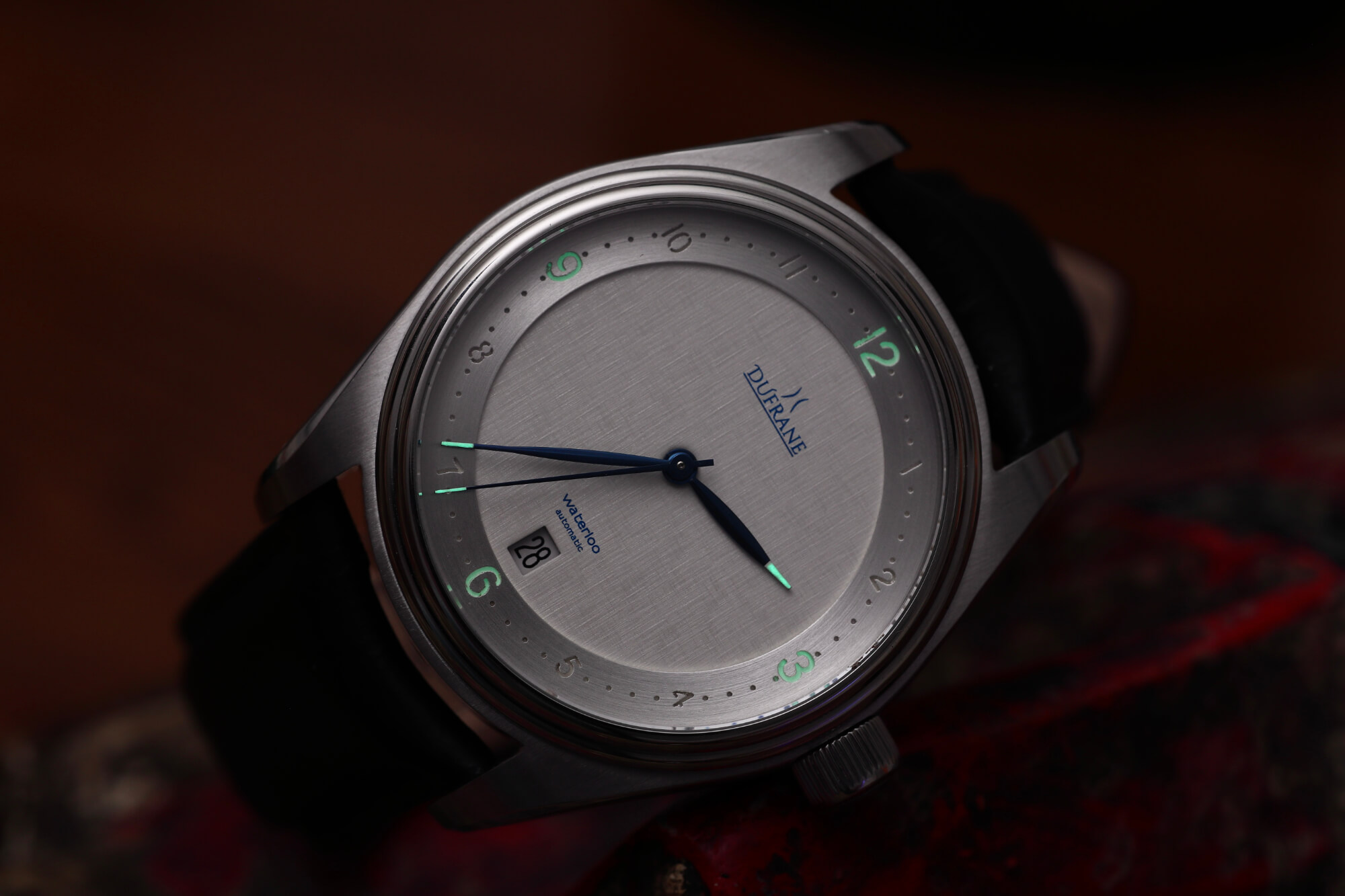 I think DuFrane’s approach to lume on the Waterloo is marvelous. On dressier watches, lume isn’t necessary and, along with the date at 6 o’clock, some would argue not true to form, but I say bollocks to that. Keeping the form of the handset without disruption or slivers of lume, and doing the same for the numerals, allows the watch to maintain its elegance while adding functionality that many desire: low-light readability. 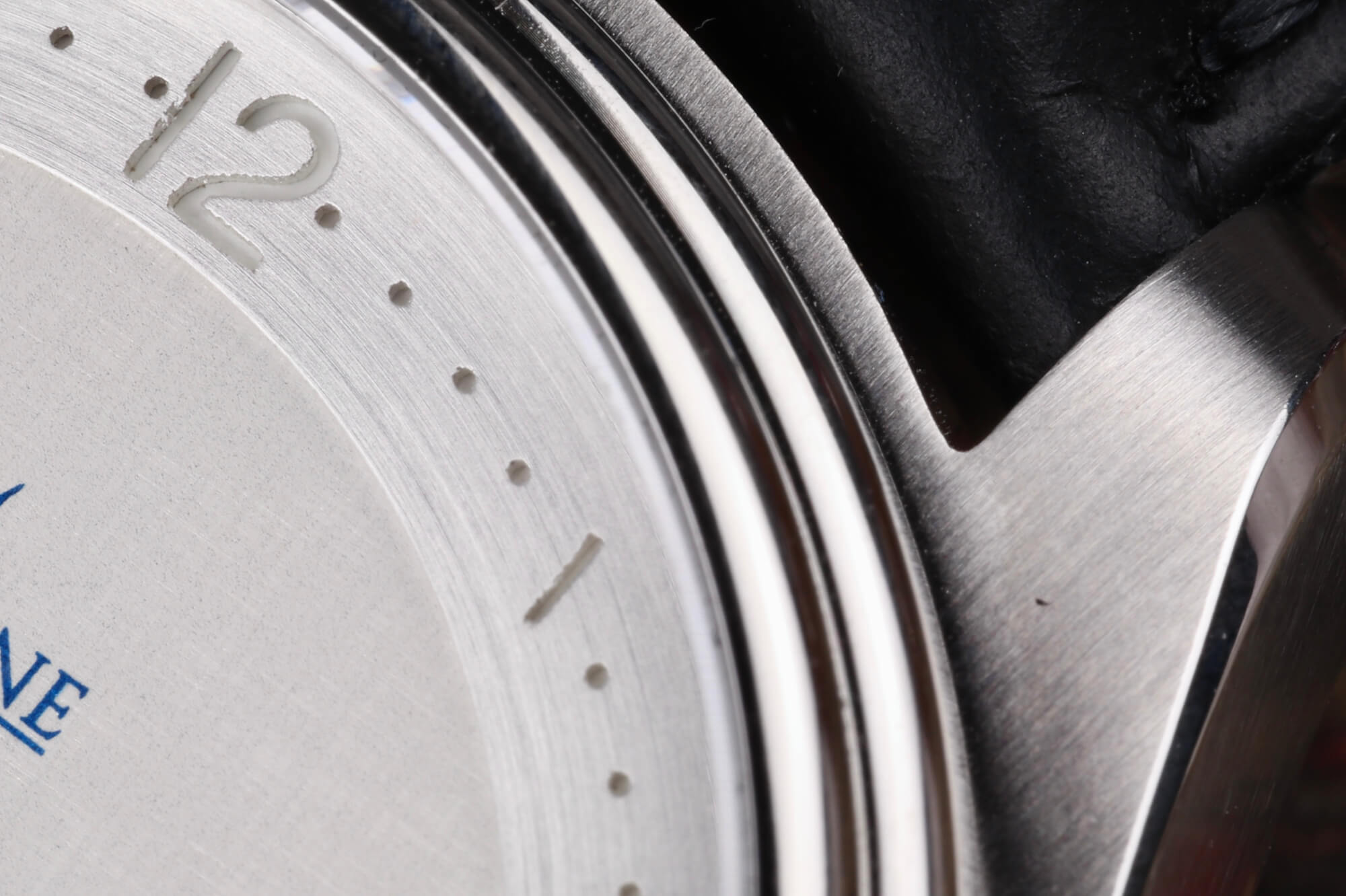 Stepping down to the main dial, you’re greeted with a rich linen texture on a just barely not white dial. It’s a silvery shimmer of white with the lightest touch of gold dropped in, making it play almost light gold in some light. Call it silver papyrus. 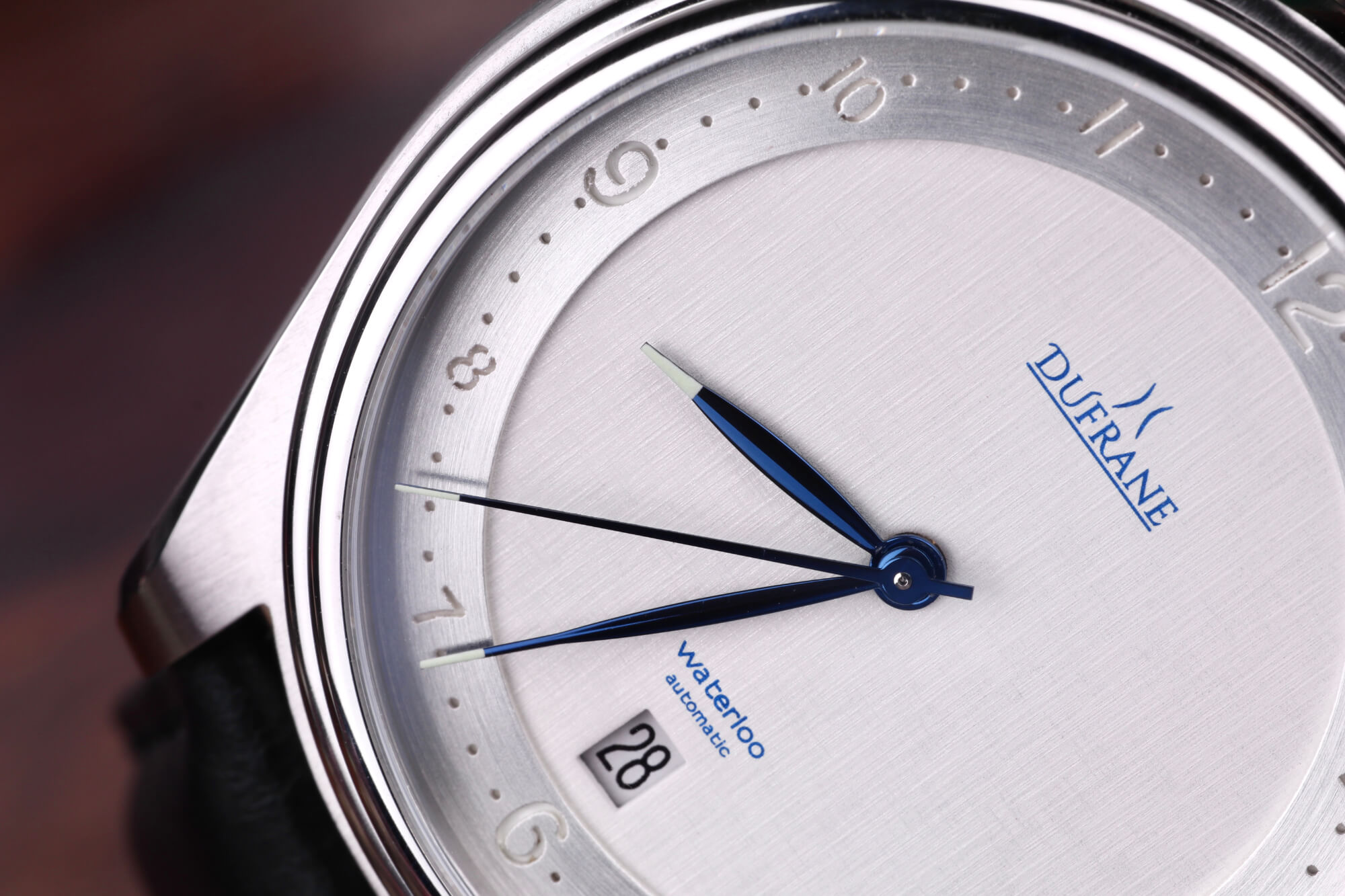 One of the few issues I have with the DuFrane Waterloo is the ‘DuFrane’ part – on the dial, that is. I understand not wanting to disrupt the texture of the dial, but the logo and brand name are too small. Frankly, I think the best option would have been to forgo the logo entirely and enlarge the name a bit. The model name above the date window, too, is so small as to requiring squinting. 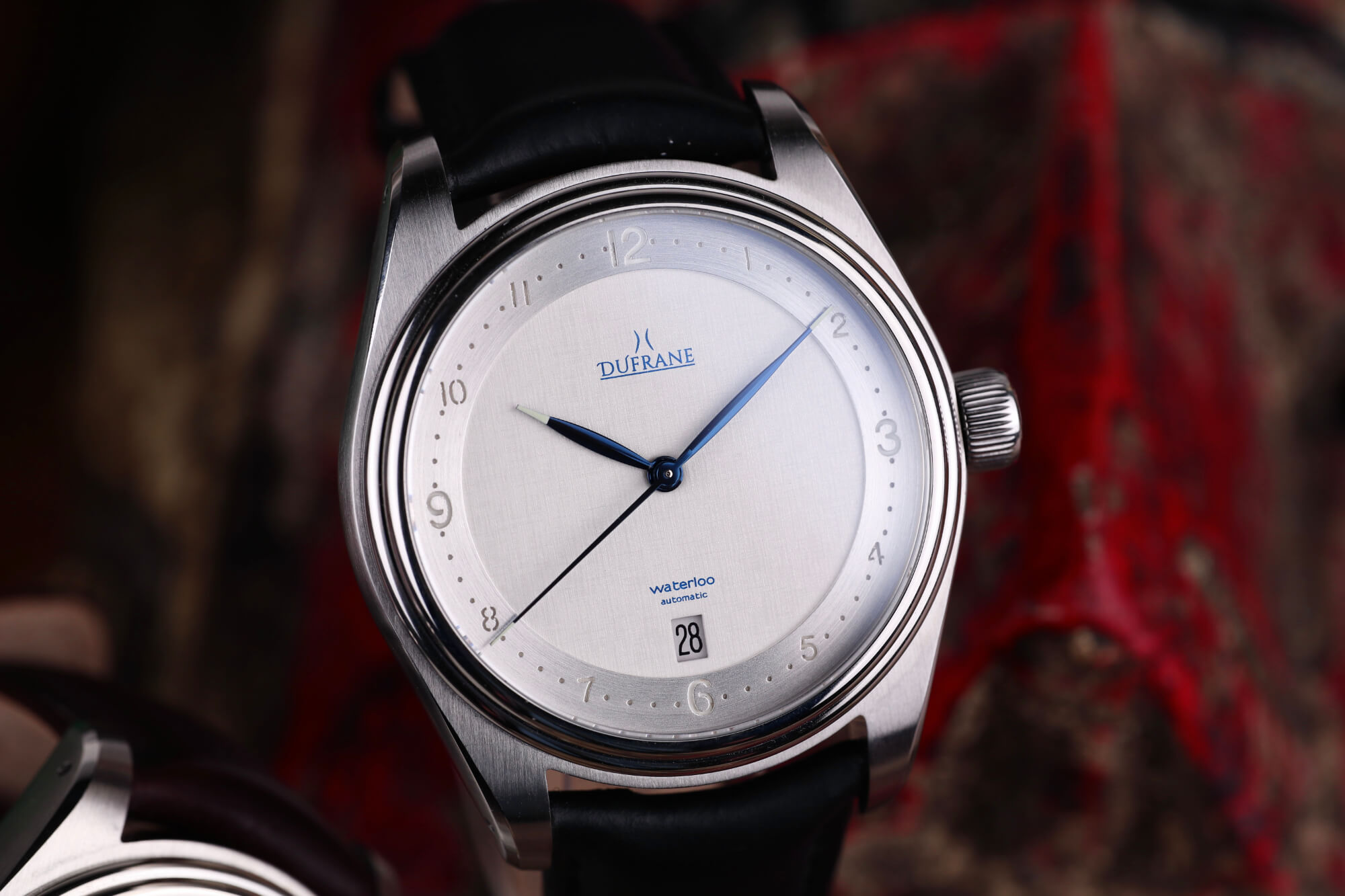 I’ve already touched on the case a bit above, and as it’s one you’re mostly familiar with, I’ll mention the standout details. In addition to the versions I had for review, both the quartz and the automatic are available in rose gold PVD cases on which the chapter ring will be what I can only describe as pink steel. The watches are otherwise identical. 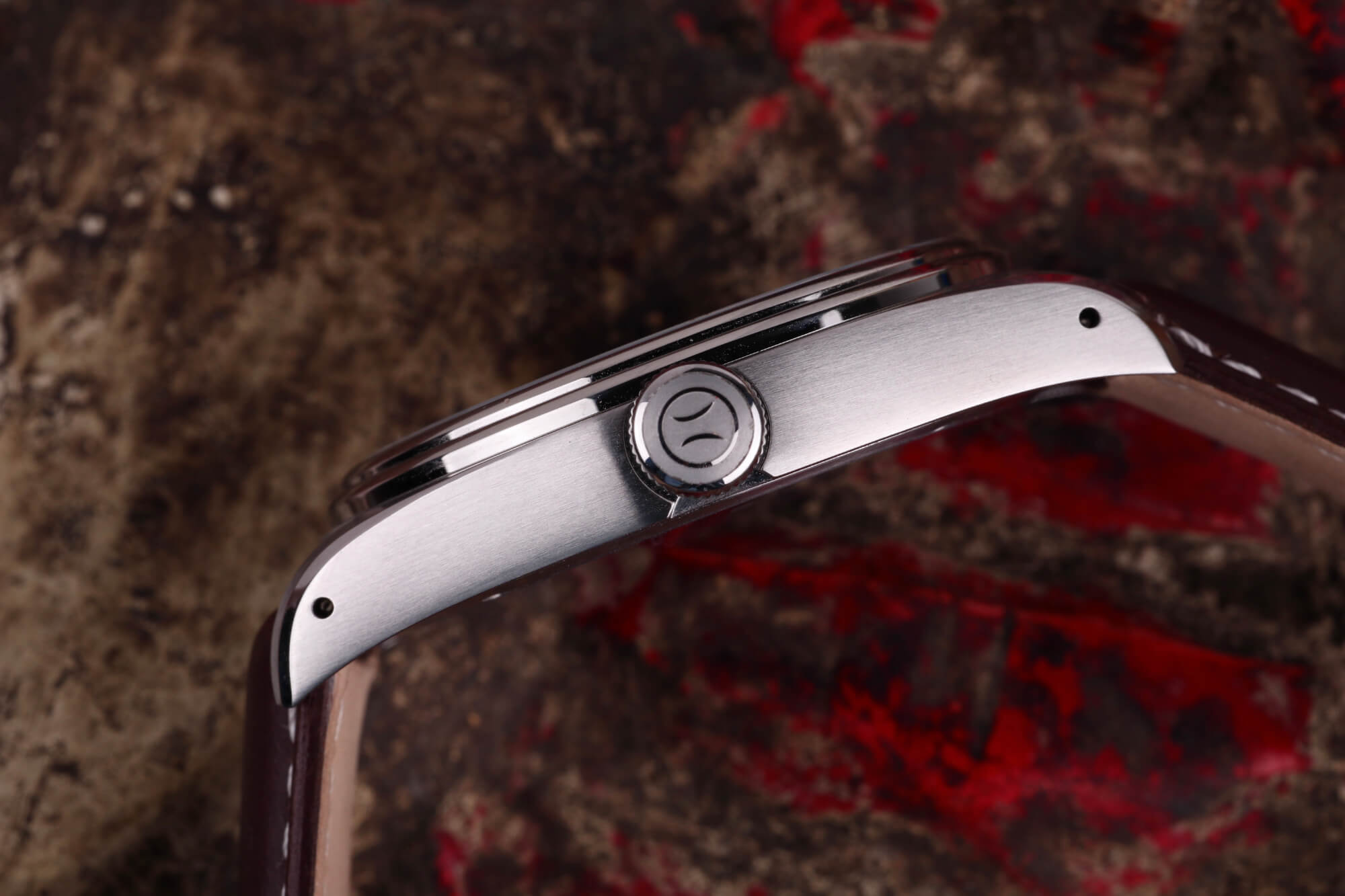 The crisp chamfer that extends from the case to the end of the lugs offers a nice, polished contrast without being disruptive. The stepped bezel really drives home the dressiness of this watch. Polished all the way around, it’s a feature reserved mostly for this style and for me dismisses any doubt about the intention of the Waterloo’s design.

The caseback is secured by screws and features a star decoration, while the push-pull crown features the DuFrane logo; a triple-gasket crown system allows for 100m of water resistance. Of note, the quartz caseback sits flat, while the mechanical caseback pops out a bit to allow for the automatic rotor, but adds only 1.6mm of thickness. I did not find the difference to be significant. 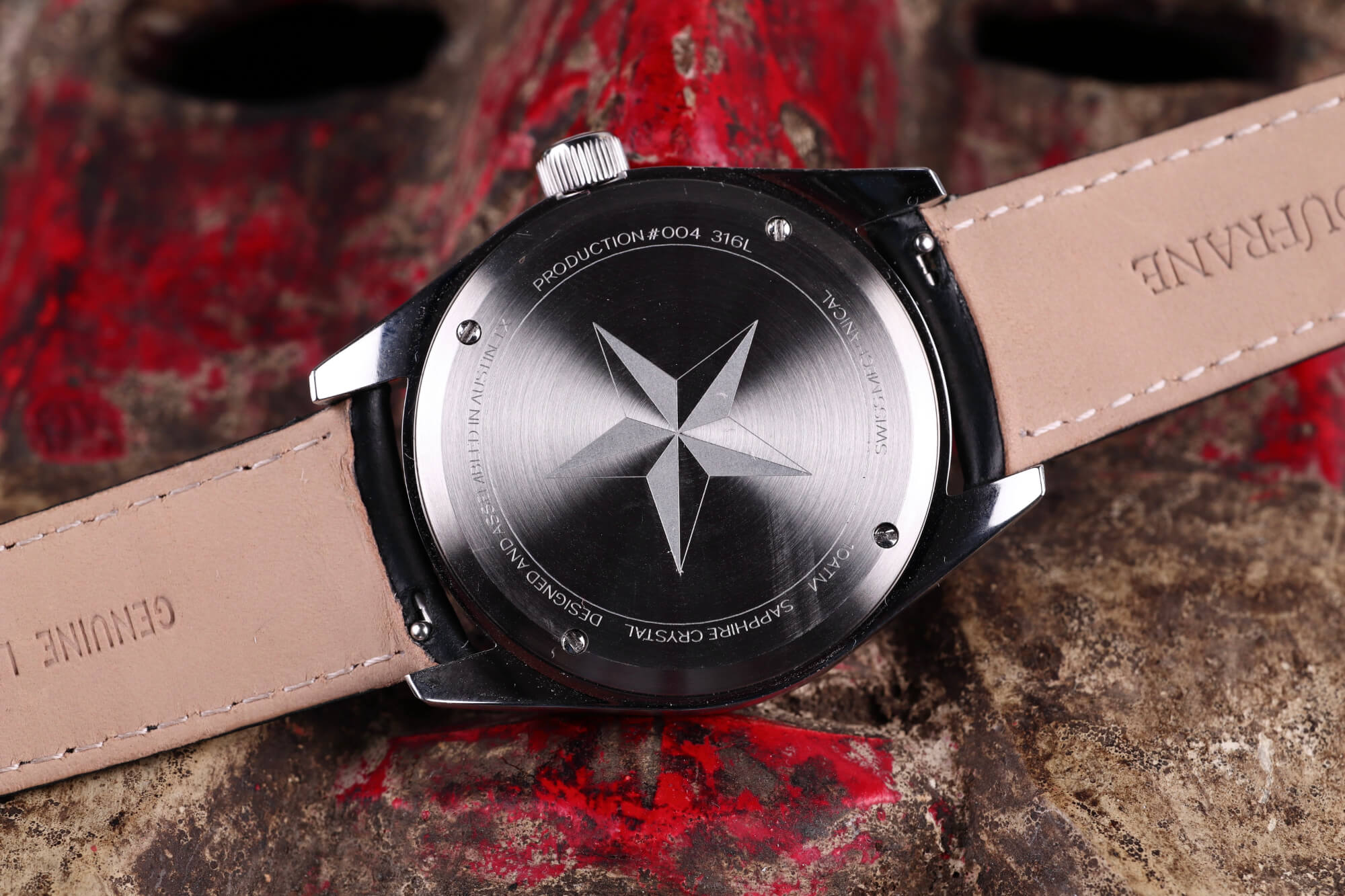 The lug holes for the included strap are drilled, though the second set to allow for other straps arenot. The second set was an add-on when the prototypes came in and other straps couldn’t be affixed. If we accept the curved ends on the stock strap, it’s a win. But I’d prefer standard ends with a single set of lug holes. This would be less awkward for the end user and maintain the cleanliness of the midcase profile. On top of that silliness, the padded insert in the strap is simply too thick and too stiff. An extended break-in period should be due to high quality leather, not excessive padding. 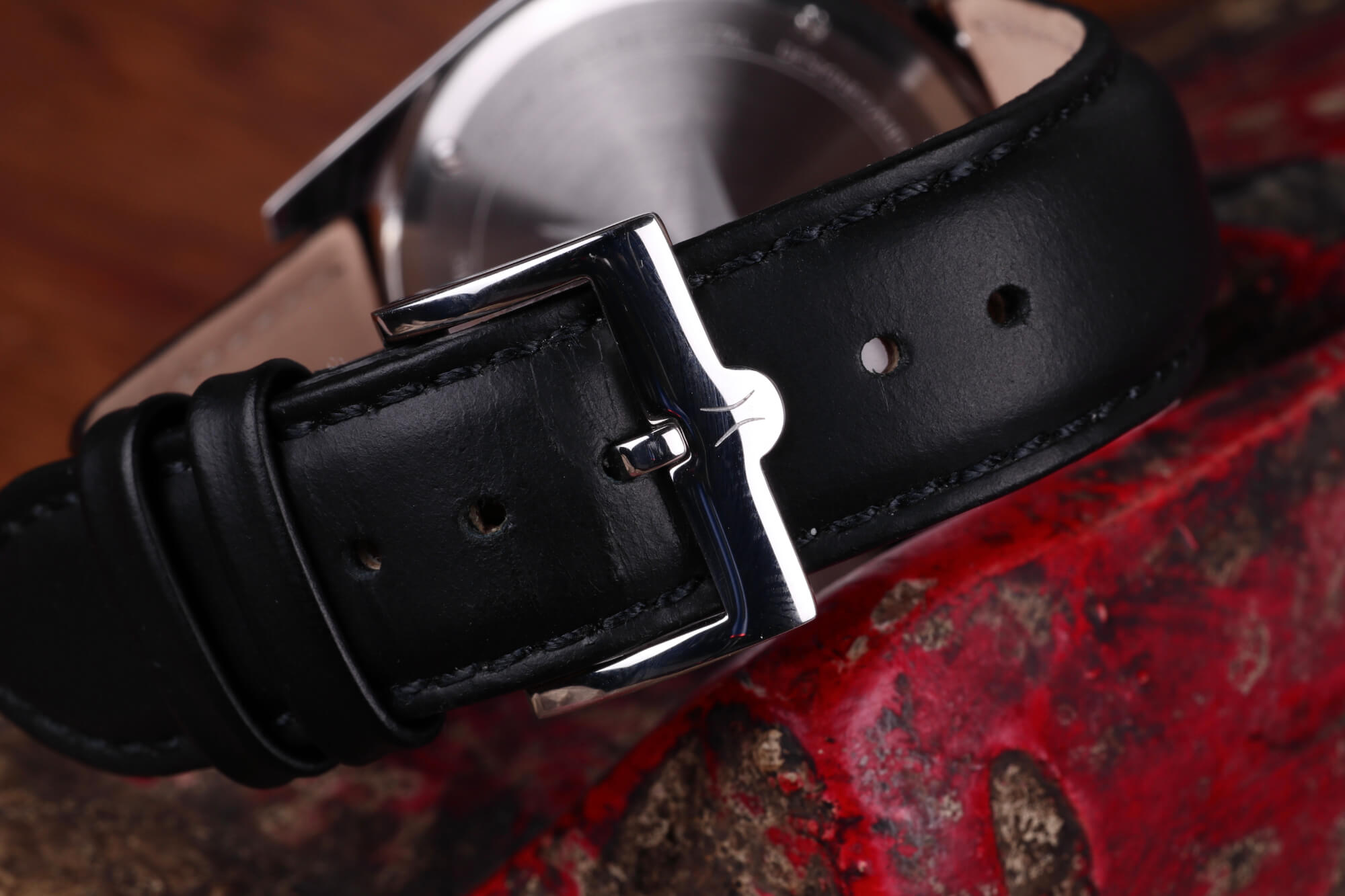 The DuFrane Waterloo presents an interesting conundrum when looking at the competition, as it sits in two different markets: sub-$500 quartz and over-$500 mechanical. Finding similar watches in each niche, especially the former, wasn’t the easiest, as the Waterloo brings a lot to the table. Let’s see what else is out there.

The Aevig Thor comes from the Dutch brand and matches the dressiness and the linen dial of the Waterloo. The dimensions are larger in every direction (40mm diameter, 48mm lug-to-lug, and 12.5mm thick with the sapphire); having tried this watch on, it does wear larger than you’d expect given its styling. Comparing it to the Waterloo, you also have a significantly inferior movement: the manual wind Miyota 8N33, so you lose the automatic function but somehow gain thickness. Some of the differences are justified by the cheaper price tag of about $525–$50 less than the Waterloo. 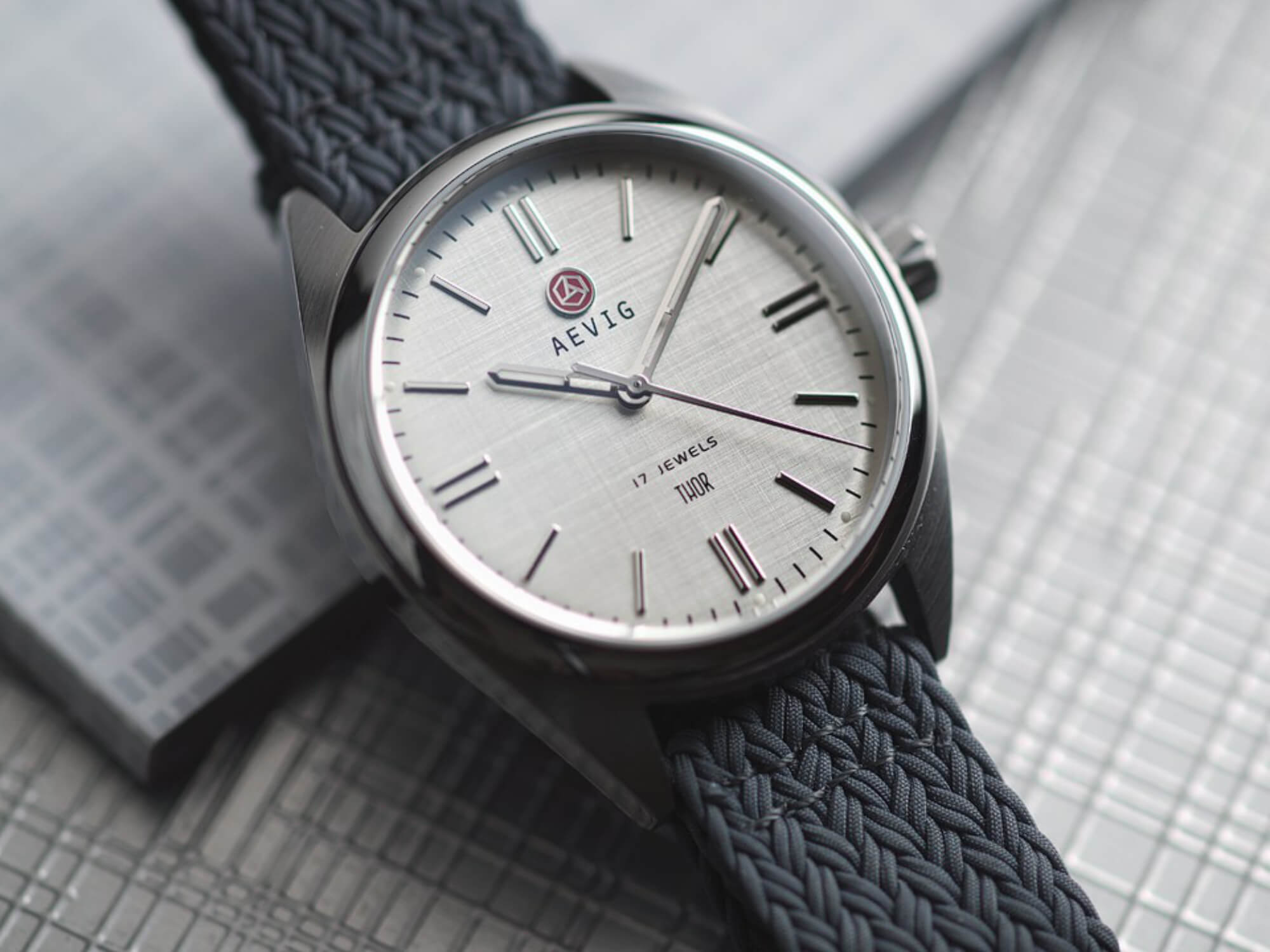 Cincinnati Watch Co. is one of my favorite brands. They’ve consistently put out enjoyable, well-made watches at astonishingly affordable prices. Interestingly, the only watch of theirs I haven’t reviewed is the newest, the Time Hill collection. An all-quartz line-up, the collection features a similar Datejust case as the Waterloo, though it achieves a more vintage feel with its dials. The Time Hill and Waterloo feature near-identical movements (the Cincinnati features the non-date version of the Waterloo’s Ronda 715), and both feature engaging dials. While I think the DuFrane dial is superior, it’s also $399 to the Time Hill’s $259. Like I said: astonishingly affordable prices. 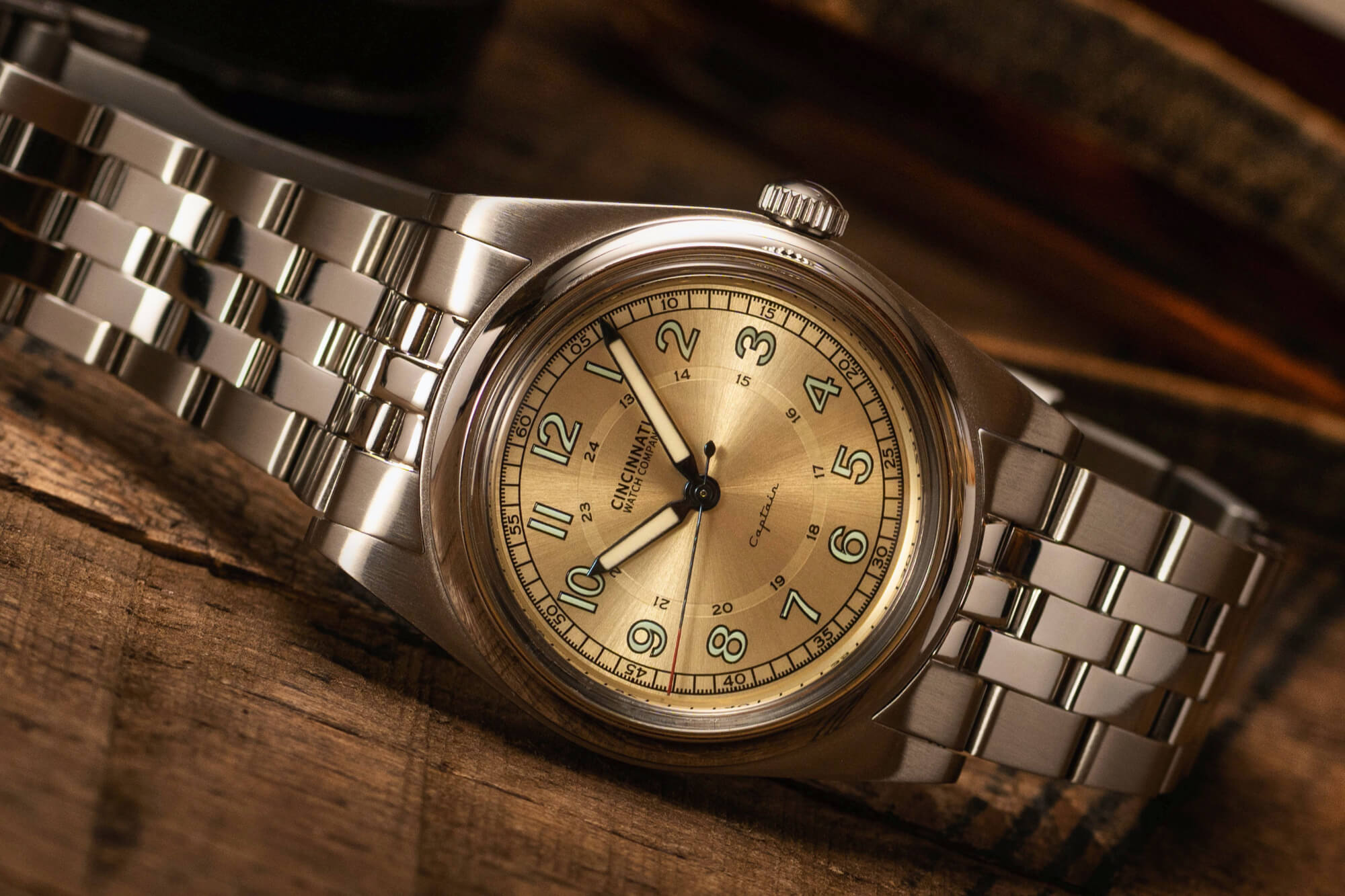 For me, the DuFrane Waterloo is the brand’s best offering yet. I admit that has a lot to do with my personal preferences for cleaner watches and less out-there designs (take a look at the brand’s City Limits GMT). After three bolder models, the brand has exercised some restraint while still managing to make things interesting. Kudos to them for hitting the nail on the head.

The Waterloo is going to be a great watch for the enthusiast who wants a dress watch that’s got a bit of functionality to it—something less formal than a Saxonia, but less purpose-driven than a Submariner. There’s an edge of versatility here that will serve the Weekday Warrior well, carrying from the office to the bar, but not venturing into the weekend wilderness.

Check out more reviews from Mike at The Watch Clicker

More Images of the Dufrane Waterloo 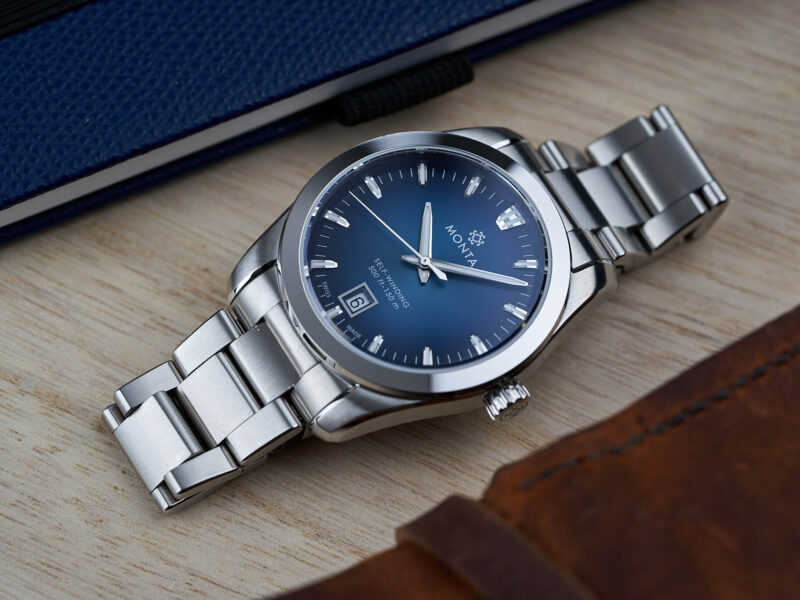 Next
Podcast – Interview with Vishal Tolani of Dartmouth Brands 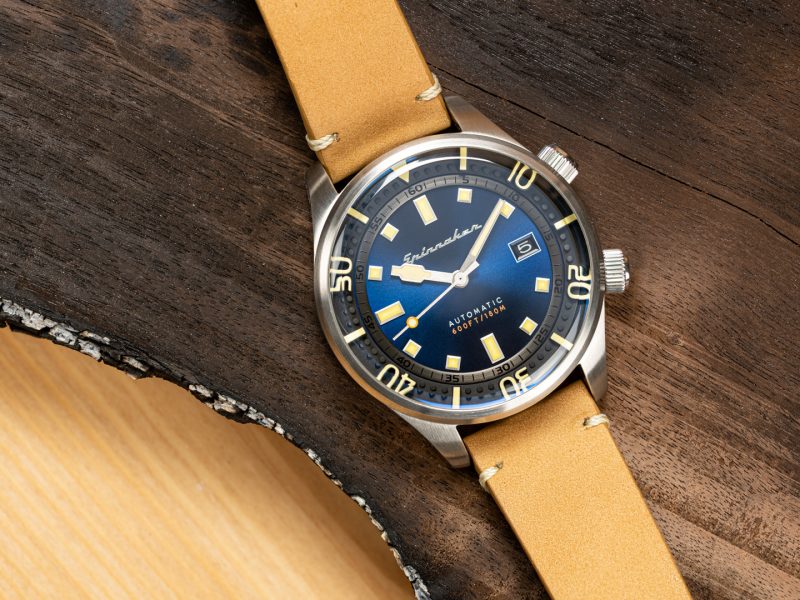 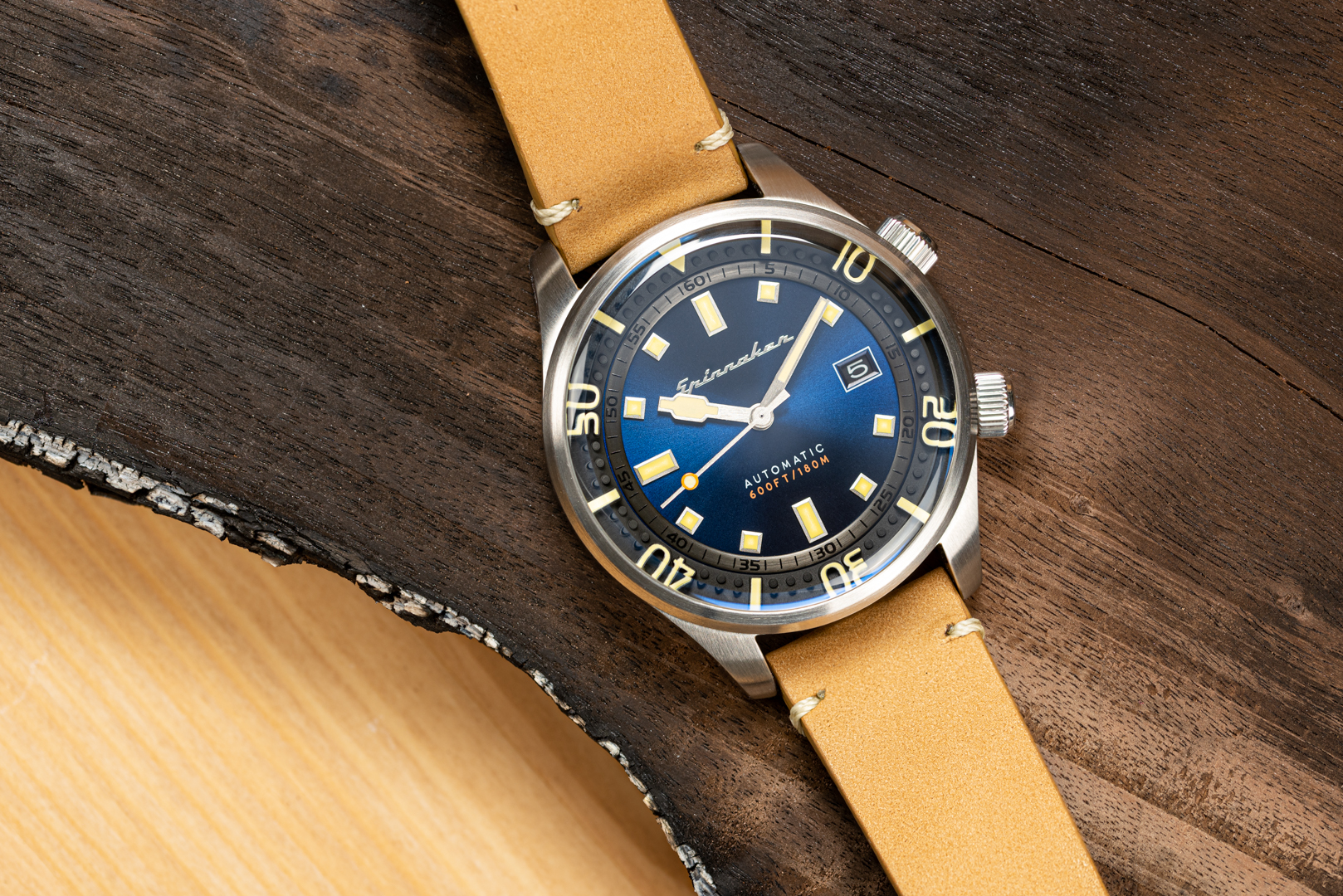 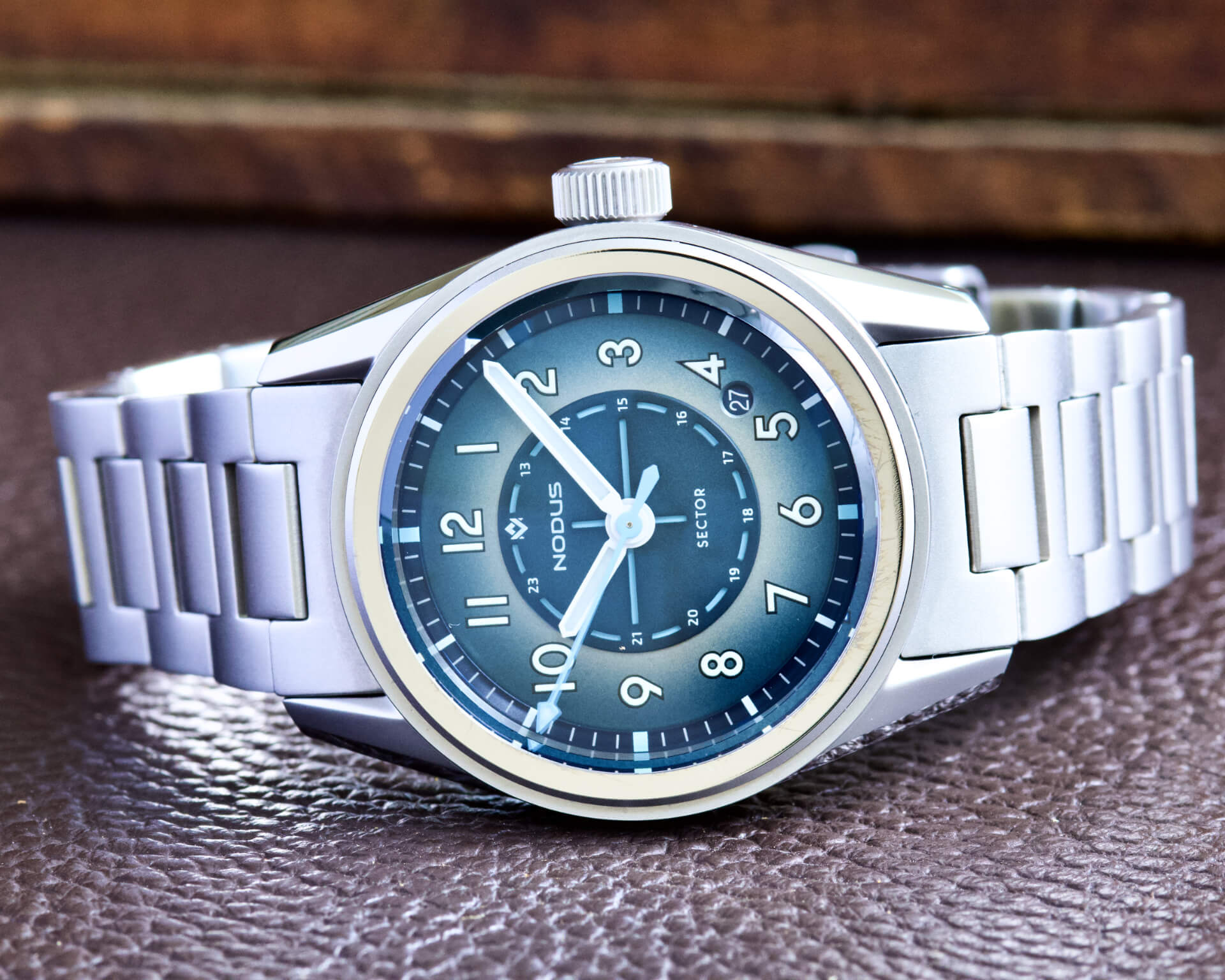 Nodus continues to improve upon the Sector series