An elegant moonphase from the London-based brand
byWill

Moonphase watches are somewhat of an enigma in the watch world. They don’t quite fall into the dress watch category and they are almost never true sport watches. A moonphase complication is often added to existing dress watch which can negate it as a true dress watch to the purist. One of the only true sport watches to be fitted with a moonphase complication without ruining its sportiness is the Omega Speedmaster. The Christopher Ward Moonglow looks to break into that segment.

It seems less often that a brand creates a moonphase watch built around the complication, rather than adding the complication at the end. Christopher Ward introduced the Moonglow earlier in 2019 with the moonphase complication being front and center. Where does this watch fit? Is it a dress watch? A sport watch? Something more? Let’s find out.

When I first put on the Moonglow, I was amazed how the case didn’t feel like the 40.5mm that it is. Christopher Ward seems to have been focusing on case design rather heavily in their new releases and the Moonglow is a prime example of how that focus has equated to wearability. The Moonglow certainly has some heft and does not feel dainty on the wrist, nor does it feel like a brick of a dive watch. 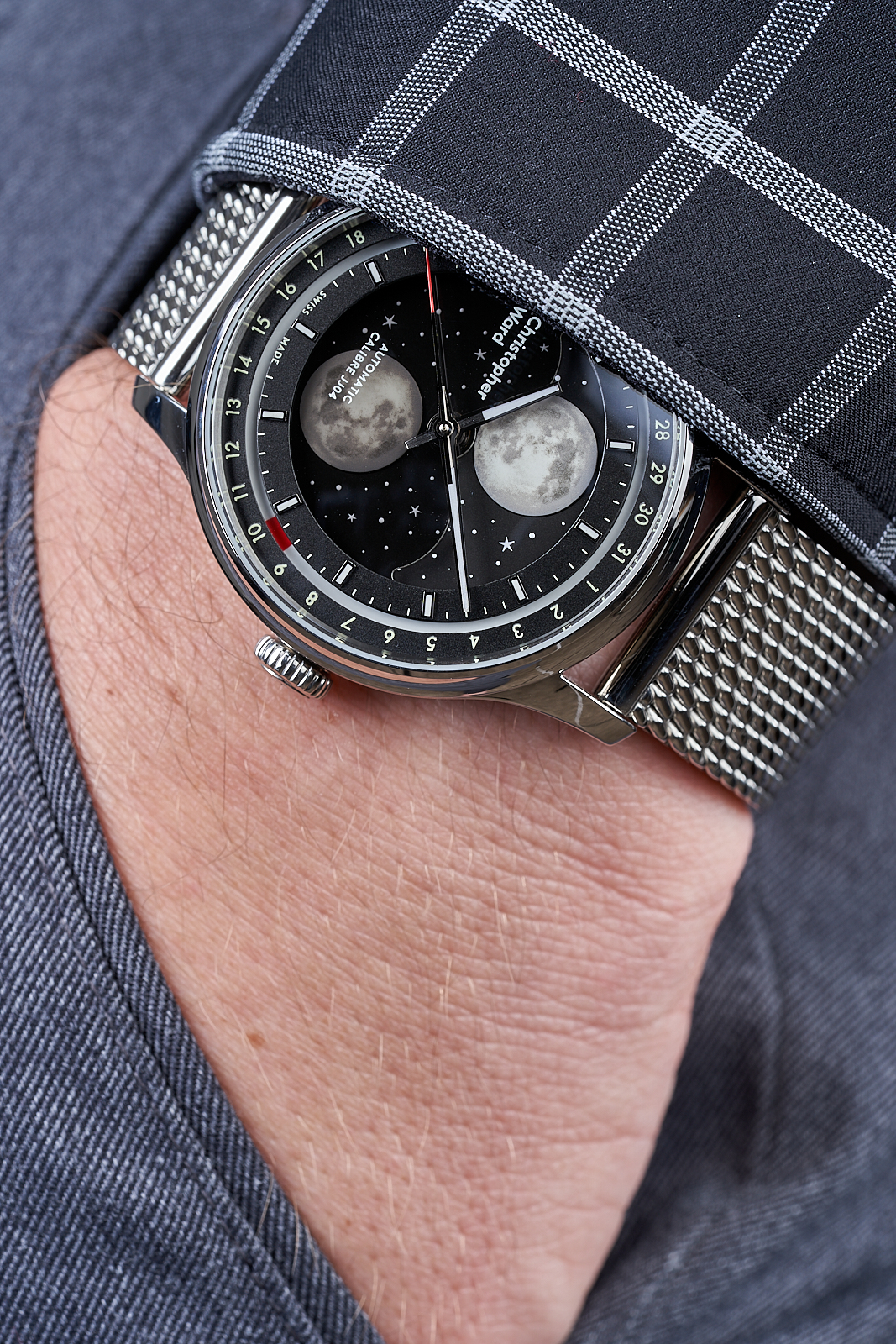 Checking the time on the Moonglow is an absolute pleasure. The big, wide dial presents itself beautifully with all the detail and information being conveyed. The lumed stick hands reach out to the smaller applied markers. They all contrast with the mostly black dial, making the time easy to read despite the complexity.

There is no way to check the time without admiring the dual moons on the dial. I’ll cover more about the moons later but given that they are the centerpiece of the watch, they are hard to ignore. When checking the time, one of them will be prominent. 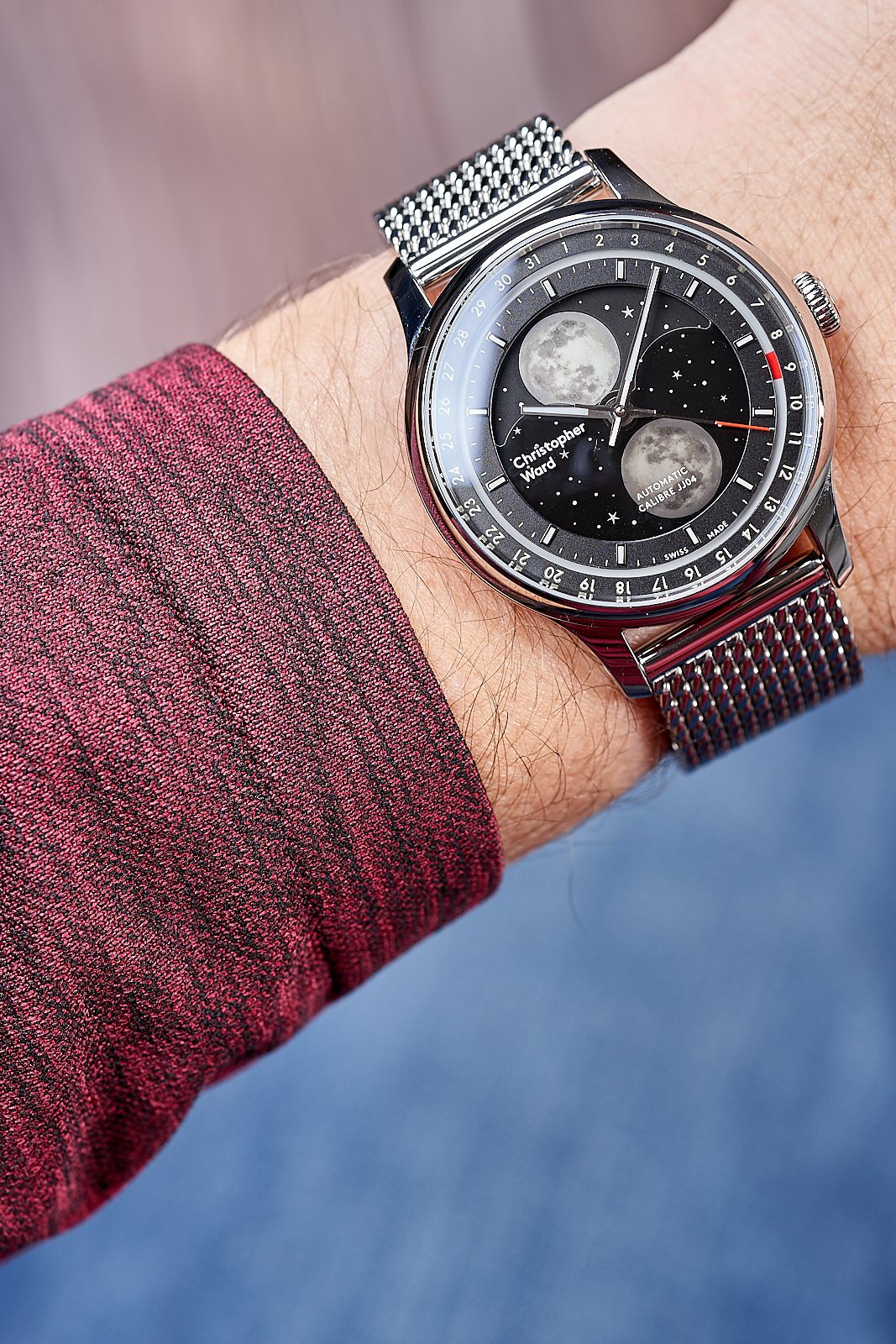 The Moonglow feels elegant on the wrist, especially for a relatively large watch falling somewhere near the dress watch category. The shape of the case and lugs conform extremely well, making it feel like an extension of your wrist. Admittedly, I had way too much fun turning my wrist back and forth to watch how the case, dial, and crystal played with the light and reflected it.

One of the main reasons the Moonglow feels so good on the wrist and wears a little smaller than you would think because of the dimensions is the undercut on the case. About halfway down the case, it cuts in dramatically as it meets the wrist. This creates the effect of a smaller watch when being worn; the full diameter of the case is not resting on your wrist. 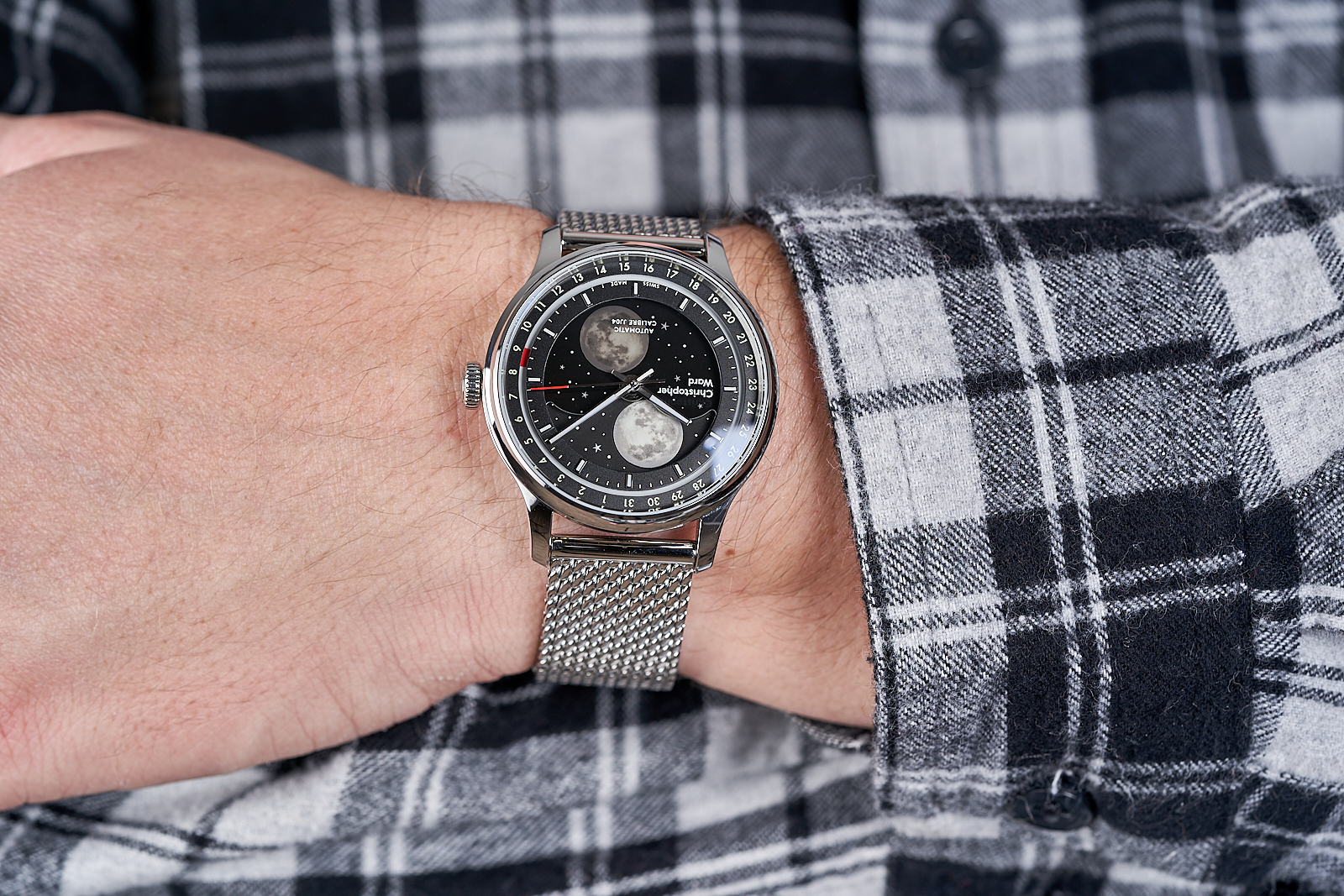 There is a lot to digest on the dial of the Moonglow. There are multiple layers and textures, but it doesn’t feel overwhelming. Christopher Ward did a nice job making the dial complex yet presentable. 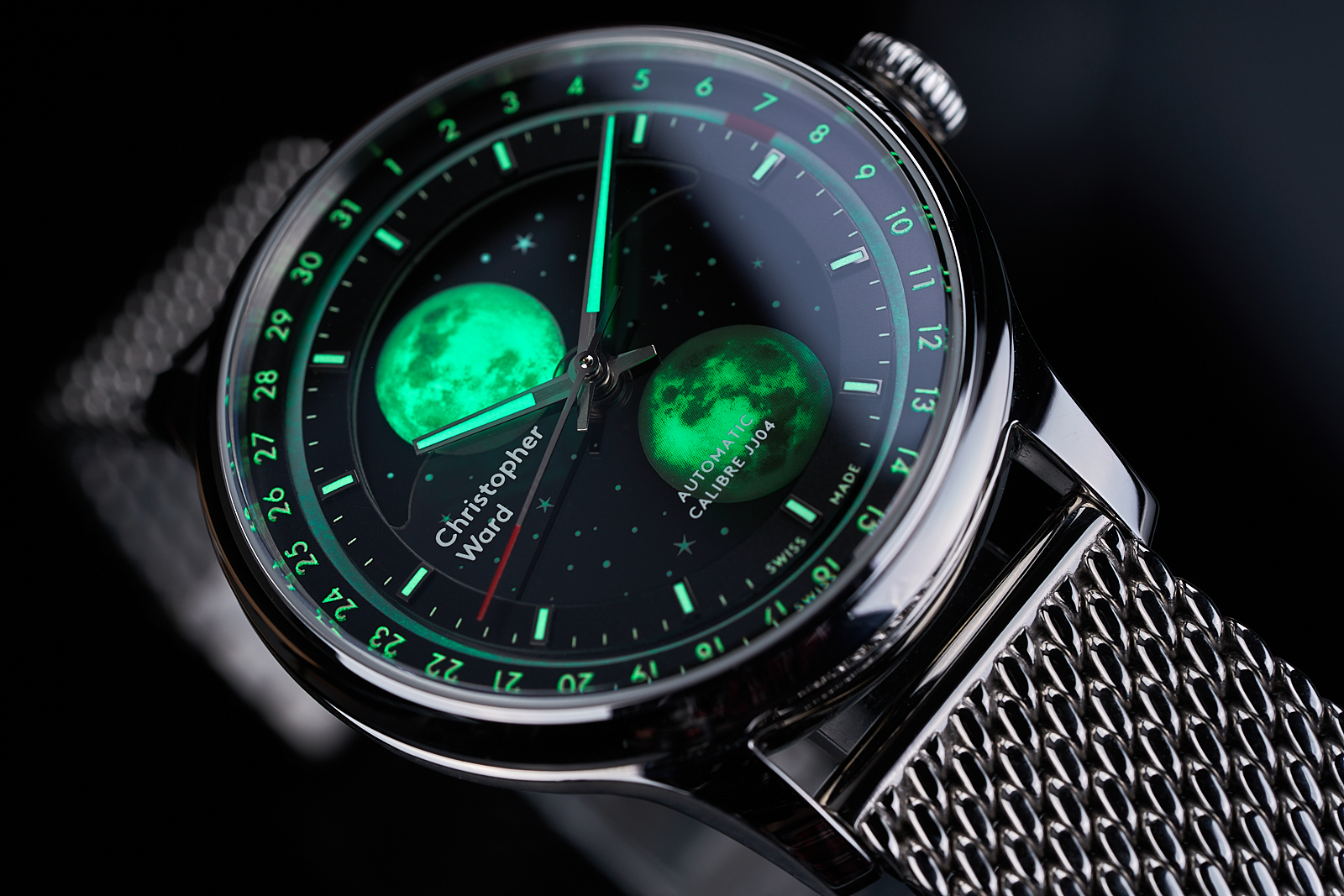 The namesakes of the watch are the two lumed moons of the moonphase complication. Wonderfully detailed and presented on a starry background, the moons glow beautifully when the lume is charged and add a nice mix to the standard moonphase complication that one might not normally expect. The moons do have a visible printed texture that is slightly more apparent when the lume is glowing. It is not visible from the distance the wearer is at when reading the time, but it is visible upon closer inspection. 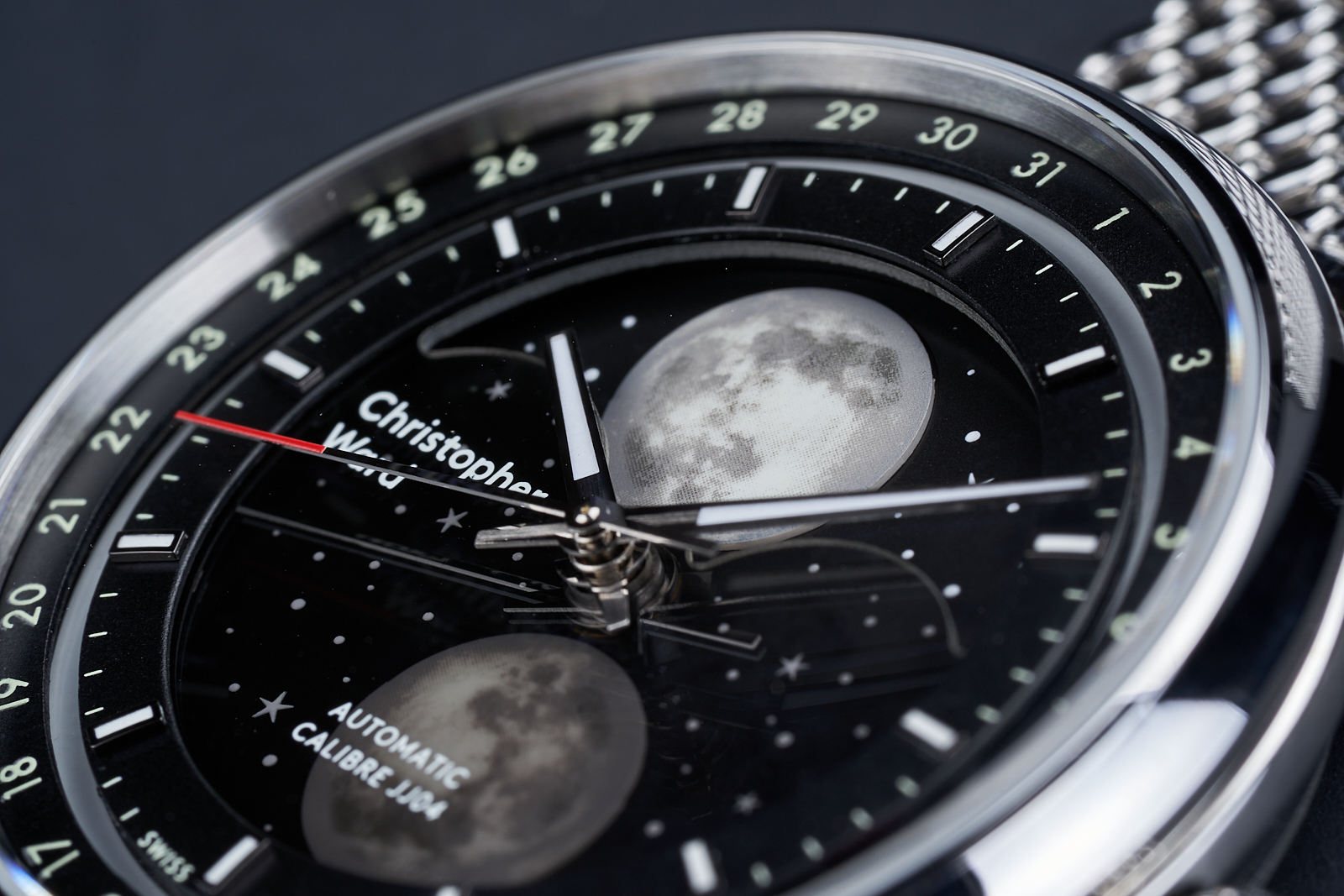 The moonphase disc rotates under a layered cutaway that partially conceals one of the moons. Christopher Ward and Automatic Calibre JJ04 are printed on this disc, giving them the effect of floating above the moons.

Split into two parts, the time and date tracks make up the outside of the dial. Lumed applied markers that are short and thin make up the inside part. In between the two tracks is the date wheel marker. Christopher Ward uses a rotating red rectangle to indicate the date. It reminds me of a pointer date complication and is a welcome change that fits better with the overall theme of the watch than a more traditional date window. 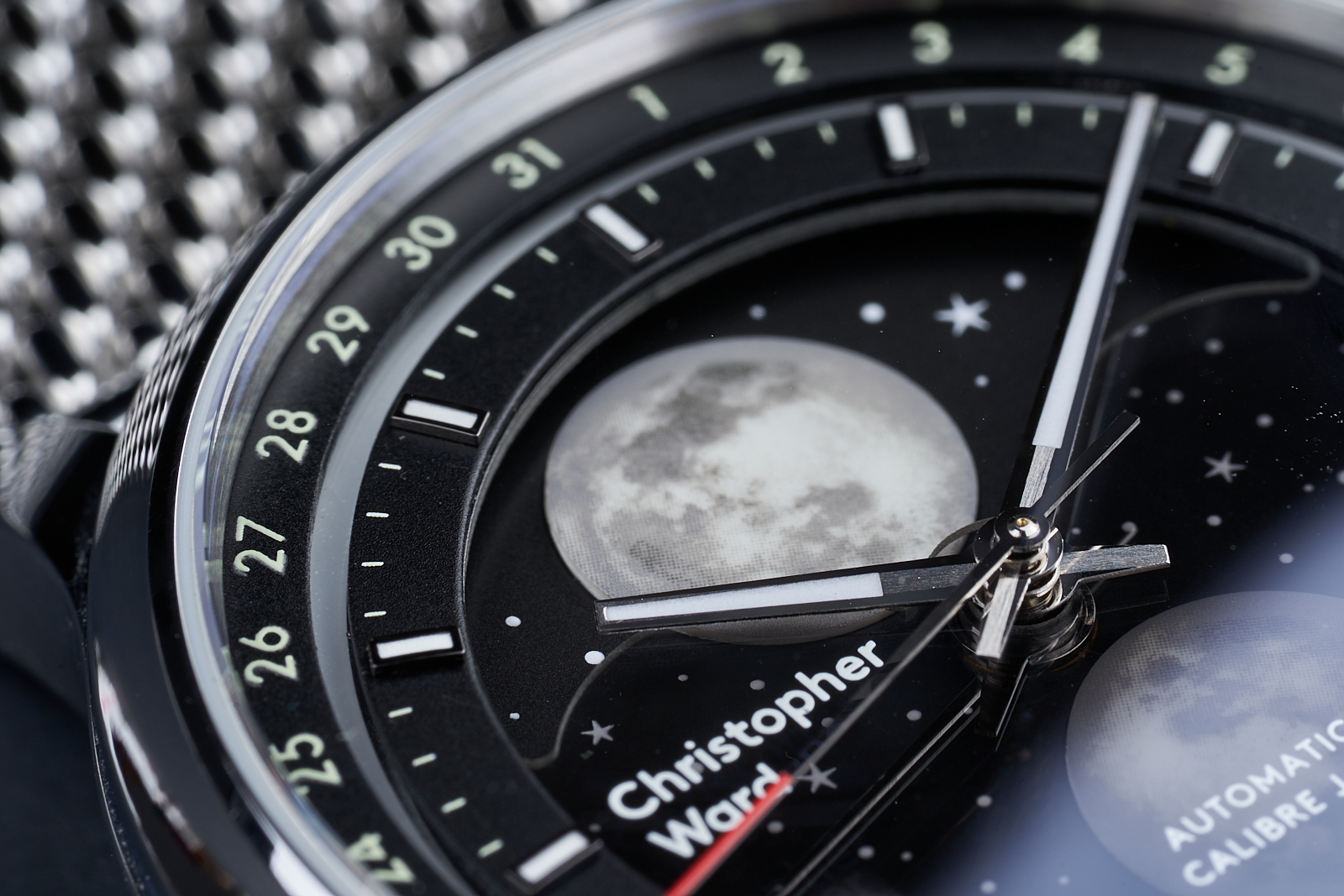 While I briefly discussed the case previously, there is more worth mentioning here. My favorite part of the case aside from the undercut on the bottom of the case is the bezel. The bezel has a concave shape, something I first saw on the Orion Hellcat. Like most of the rest of the case, it is completely polished and because of its shape, it can play with the light in unique ways. It is a nice change from a flat bezel that wouldn’t add as much character to the case. 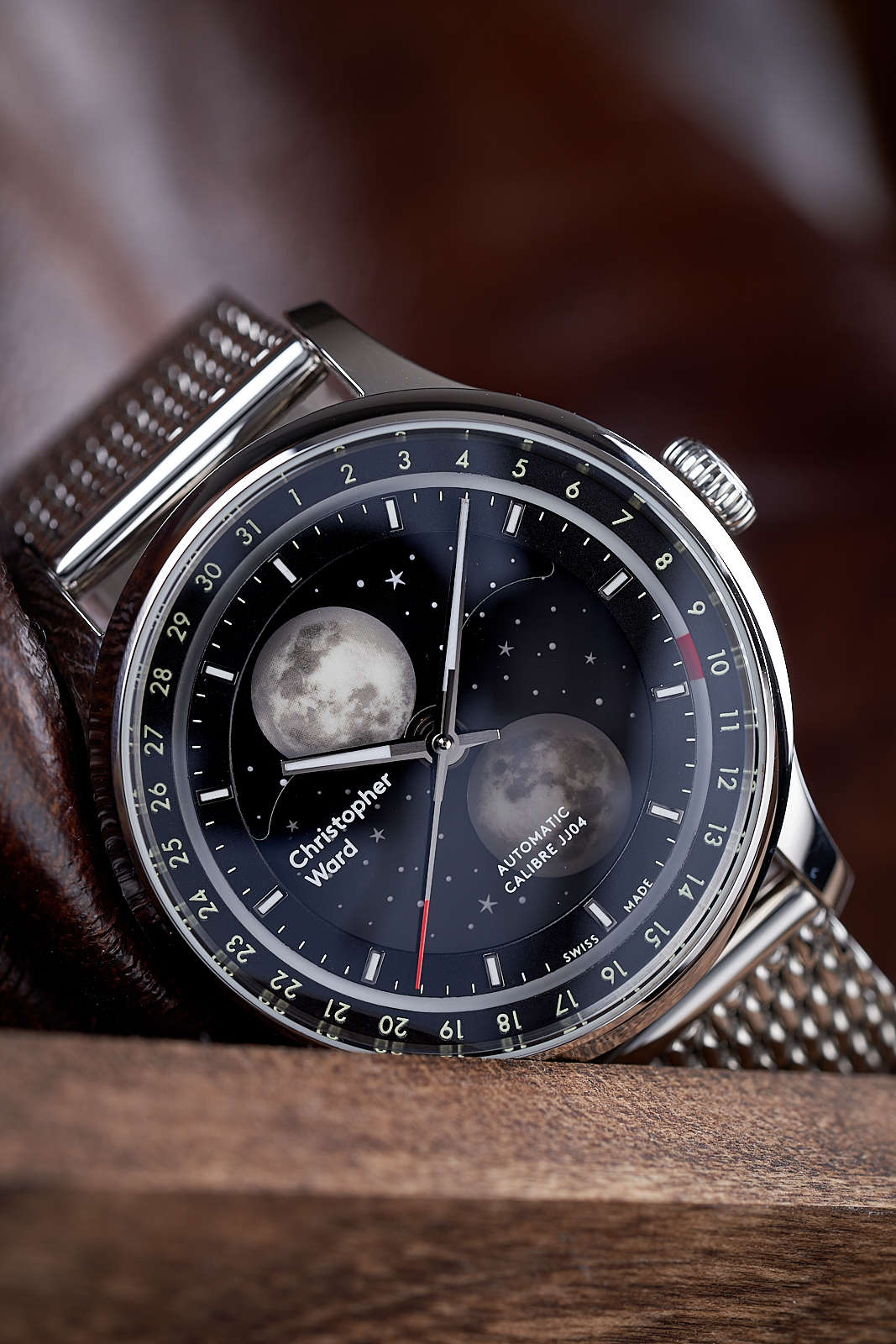 The sides of the case are the only other areas not polished. However, they do not appear to be heavily brushed. The grain is almost invisible, and it has more a satin to semi-gloss finish than you would see with standard brushing. It plays well with the polishing on the rest of the case and doesn’t take away from the dressy nature of the watch.

A signed push/pull crown is at 3 o’clock. The crown is easy to grip from the bottom but slightly more difficult to grip from the top, making winding the watch difficult at times. Making the crown only 1mm larger may have helped with this. When you do get a solid grip, the winding action is smooth. 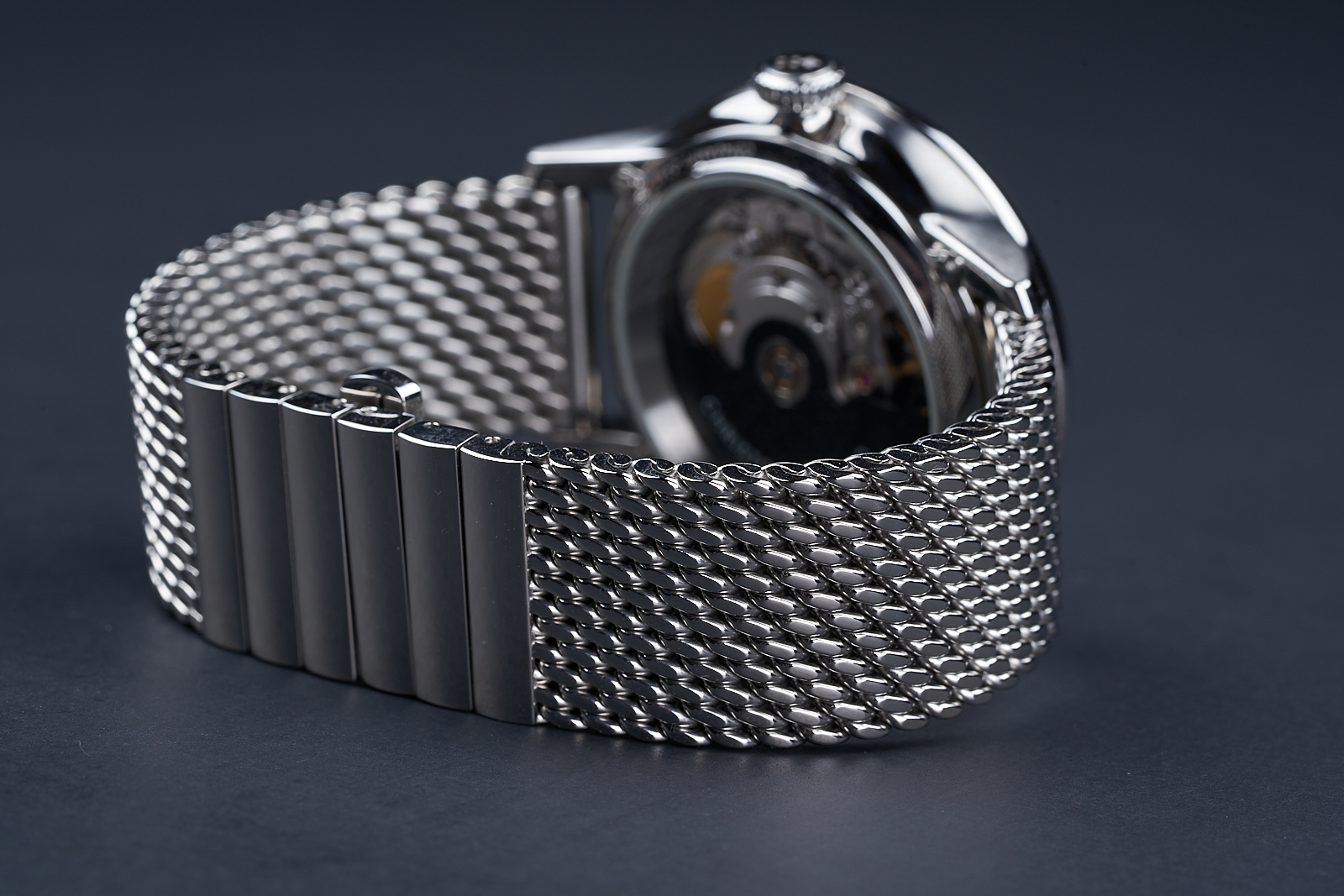 The Christopher Ward calibre JJ04 with its custom rotor is visible through the exhibition caseback. The movement is a modified ETA 2836 to which Christopher Ward added the moonphase complication. Something of note is that Christopher Ward states this complication will remain accurate to within a day over a 128-year span if kept fully wound. Unfortunately, I won’t live long enough to test it.

I received my review sample fitted with the Milanese bracelet. The bracelet has a butterfly clasp and overall the bracelet is serviceable enough and pairs well with the design of the watch. I did keep accidentally pressing the pushbuttons on the clasp which opened one side quite often. The pushbuttons are on the bottom of the clasp which may be why this kept happening. Christopher Ward does also offer a black leather strap option. 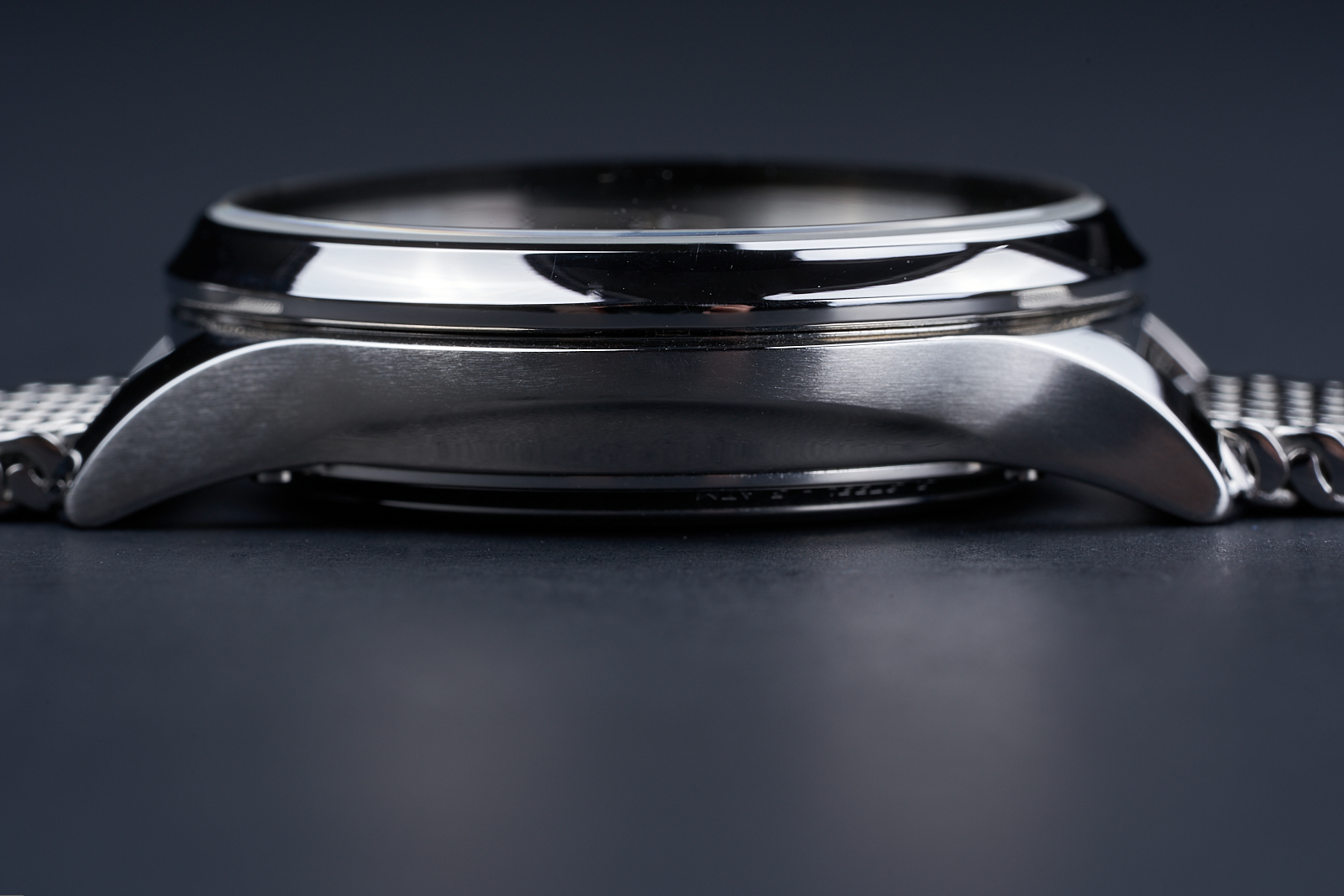 Dress watches aren’t typically my forte; I am a huge fan of tool watches and more specifically dive watches. With that said, I didn’t want to take the Moonglow off. Part of the reason I love tool watches so much is because of the different elements and visual interest they possess. The Moonglow has all of that in a watch that most would consider a dress watch. There’s so much to look at which makes it a fun watch to wear. 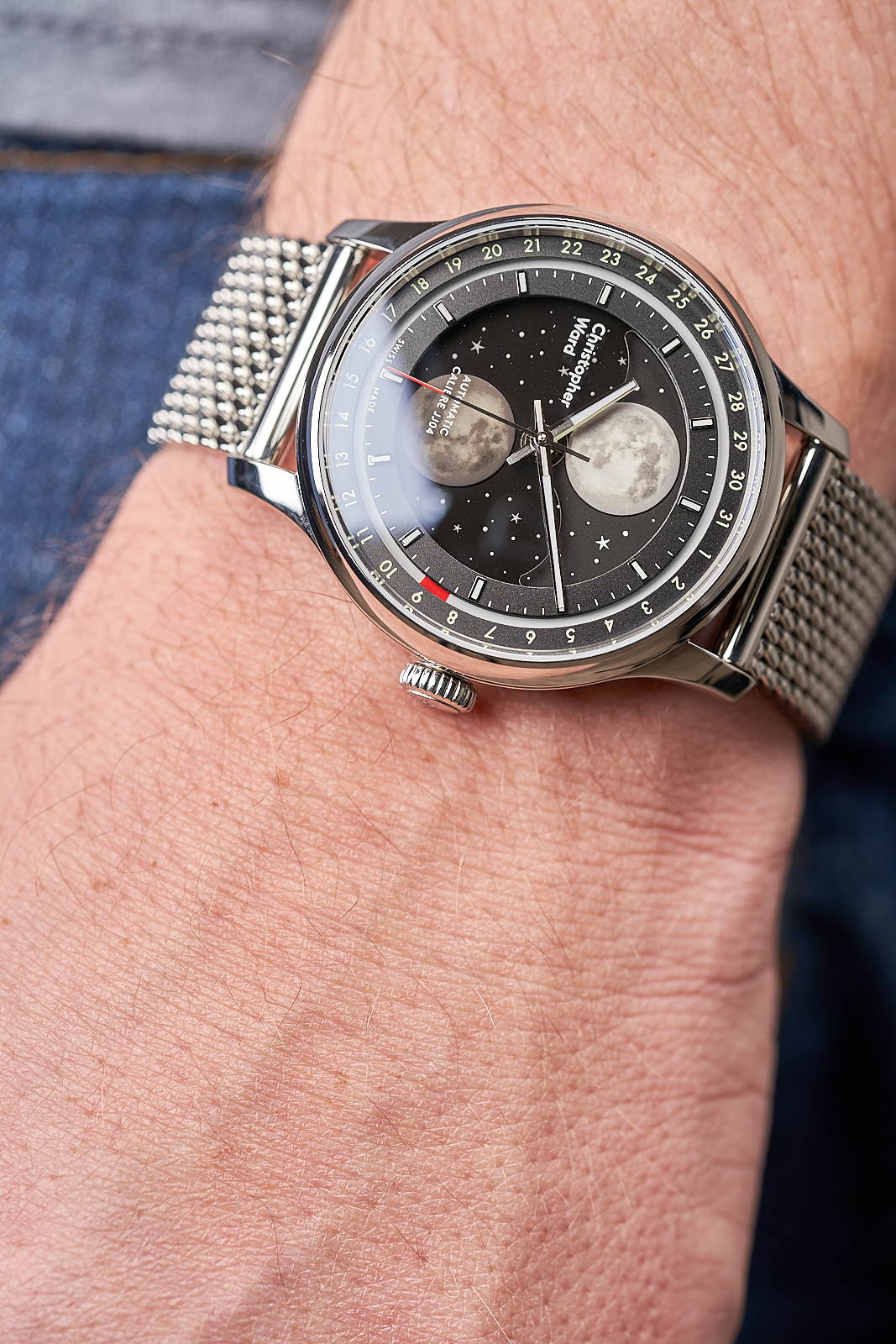 There are a few flaws with the Moonglow but they can be easily overlooked especially when considered next to the merits of the rest of the watch. The Moonglow is a watch that can start a conversation as the elements on the dial are large and elegant. However, even if you never talk to anyone about this watch, you’ll have endless enjoyment from it. It is a pleasure to wear and even better to look at. 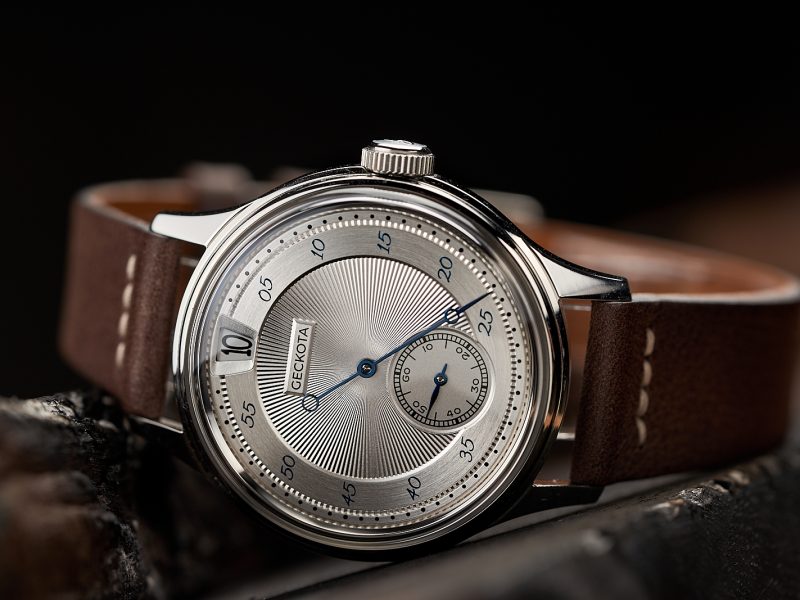 A complication not often seen in modern watches, especially at an affordable 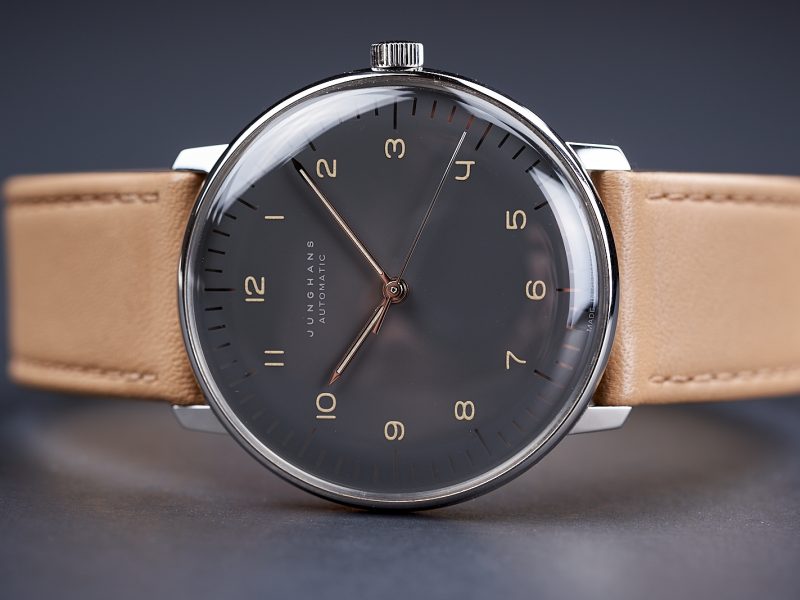 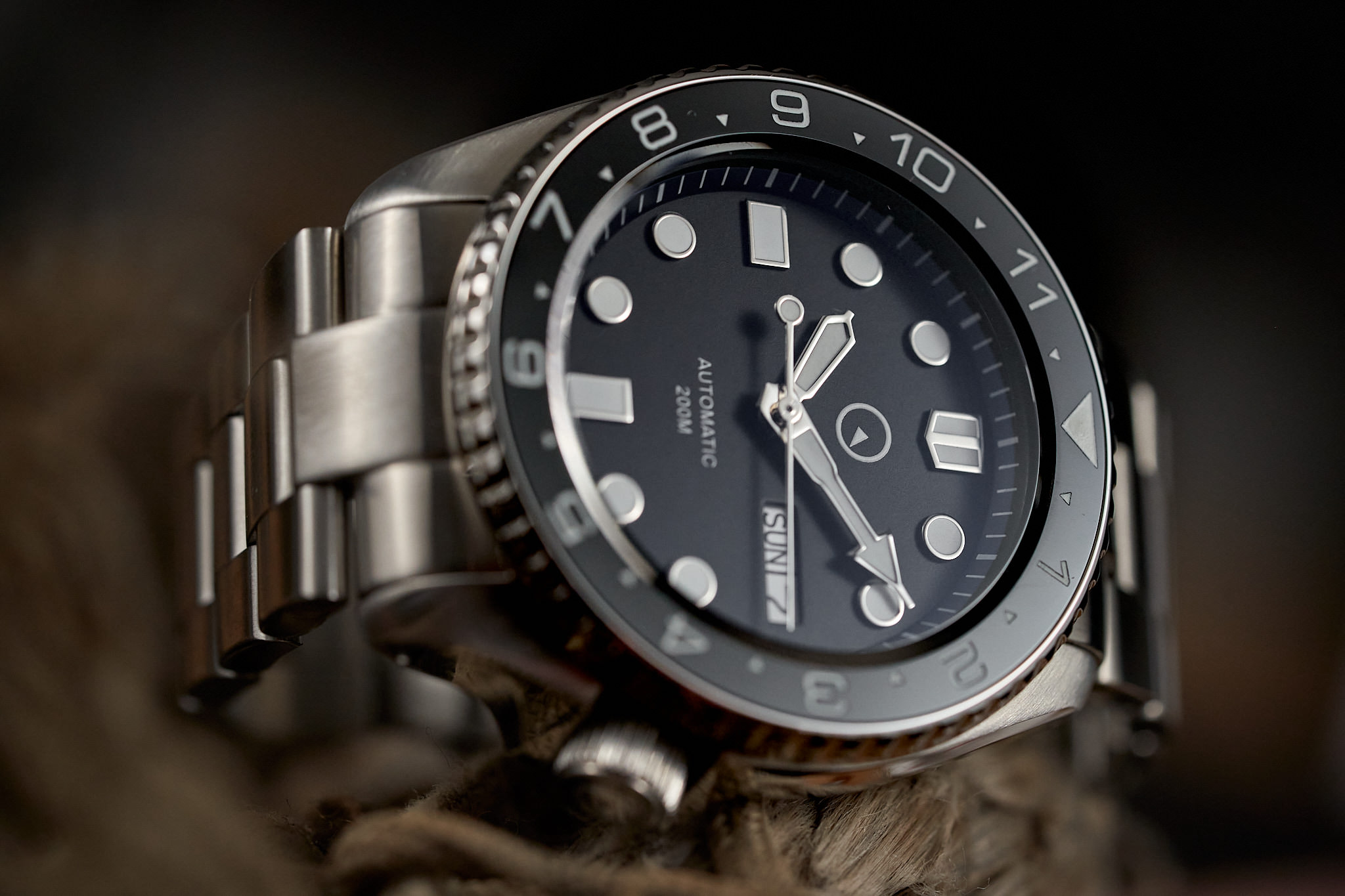 Looking for a modern SKX? 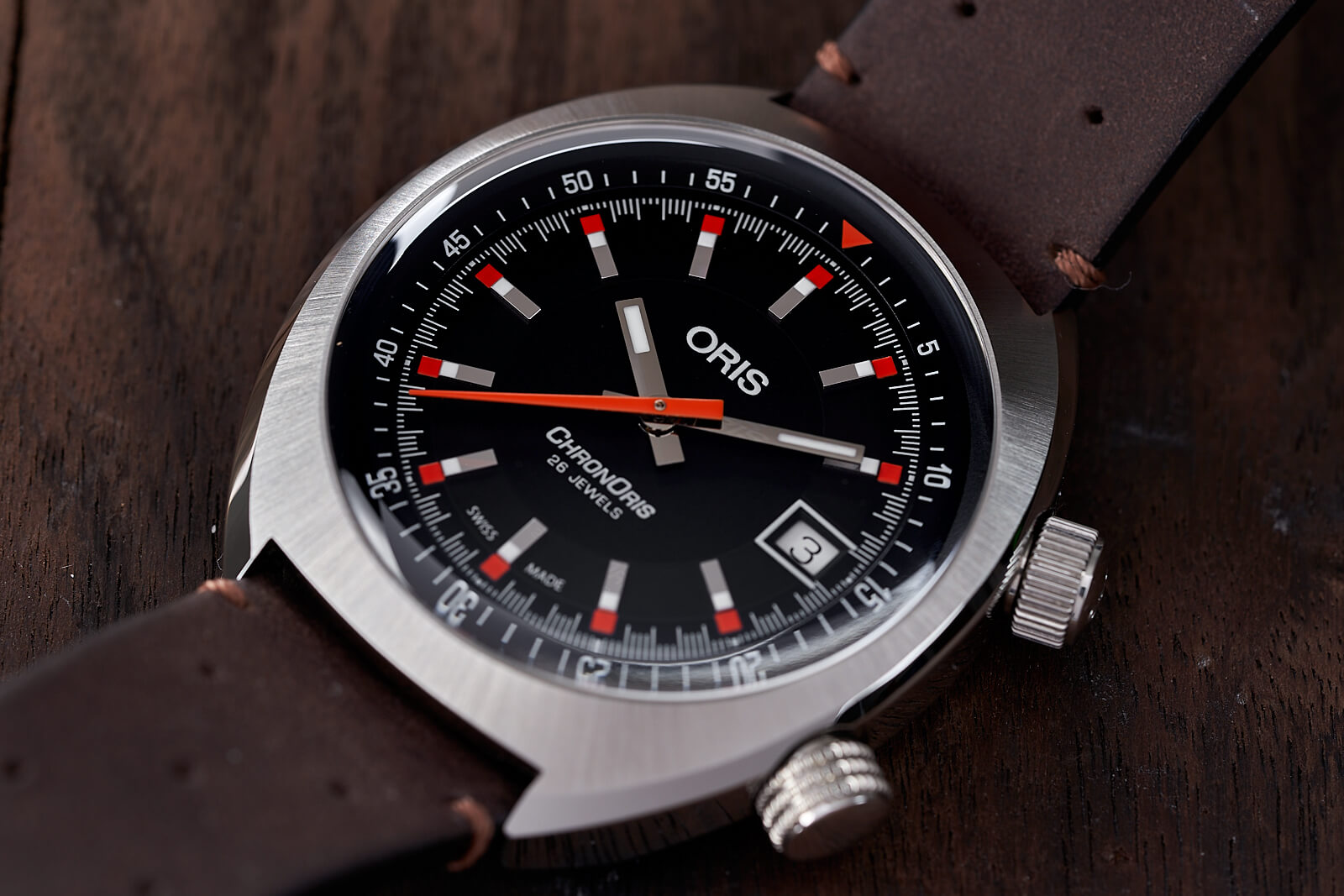 A compact 3-hander packed with tons of detail 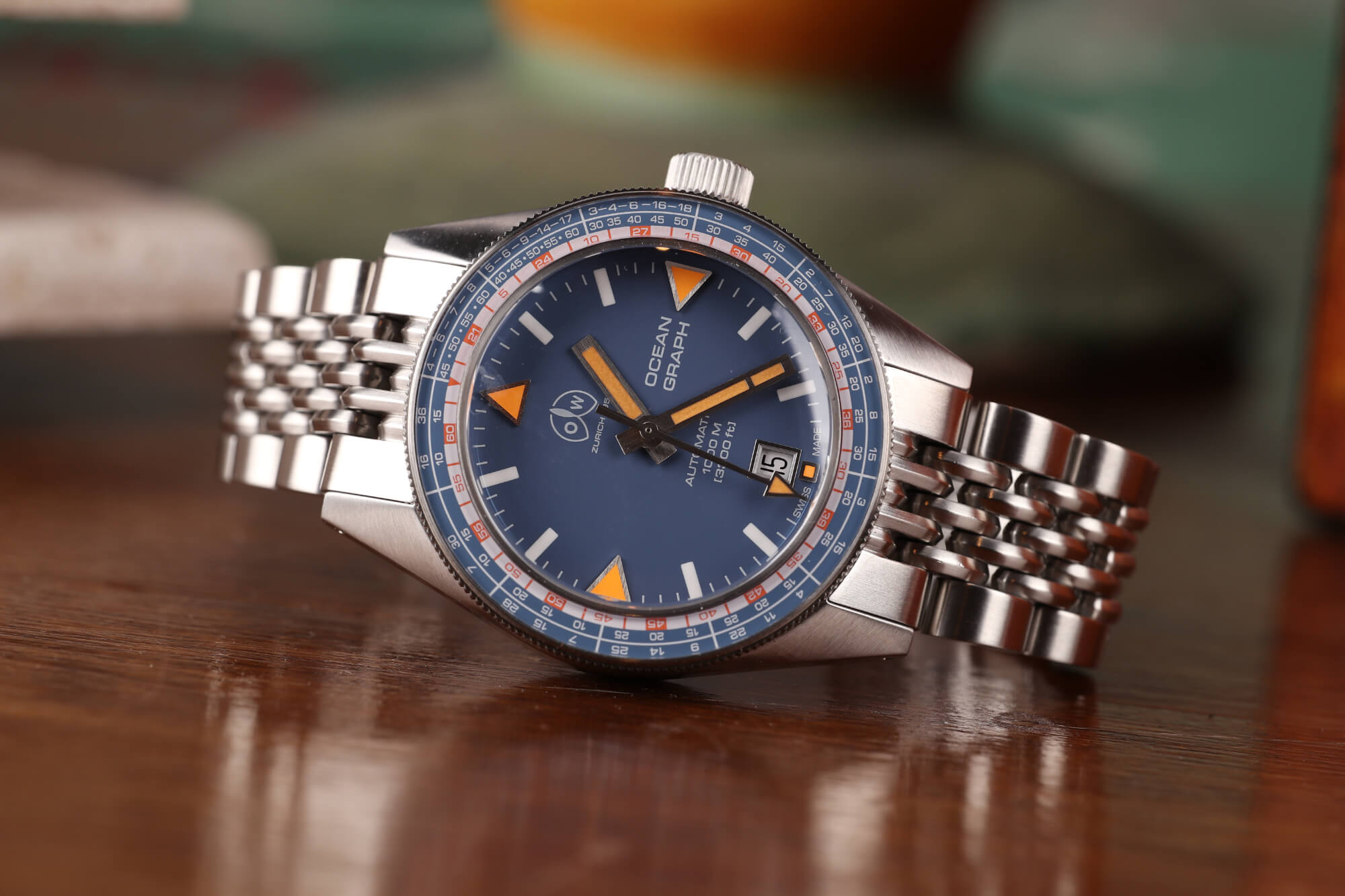 Ollechs & Wajs is not a new brand 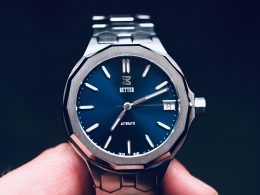 The Vacheron 222 for the rest of us