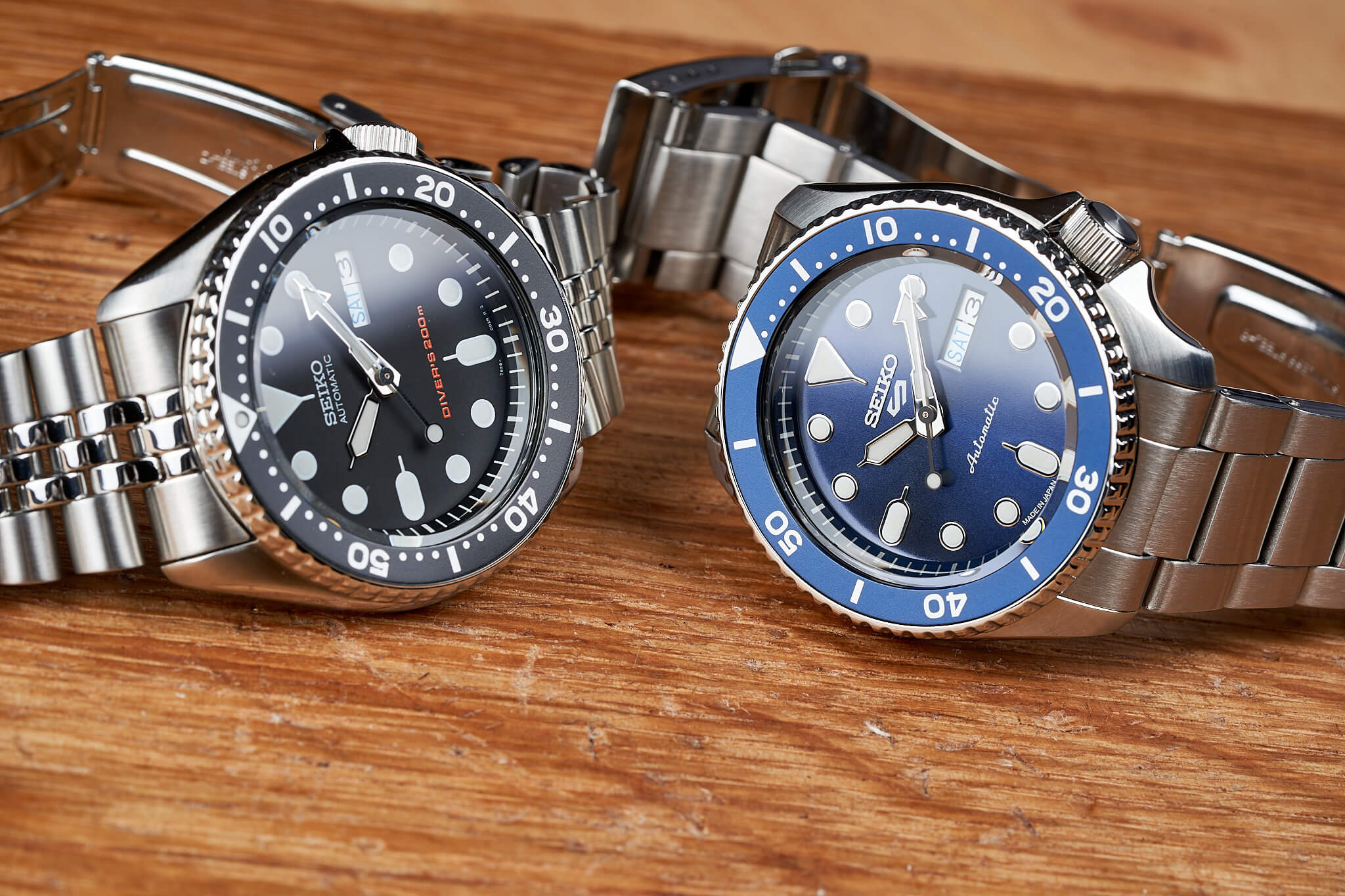 There are few watches that garner a reputation as prolific as the Seiko SKX. Legends of the watch’s capabilities and prowess run wild across the Internet. Robert Redford would have died in All is Lost if it weren’t for his SKX009. If you show up to a Red Bar event with an SKX007 on your wrist, the entire gathering will stop to talk to you about how you acquired it.

While I exaggerate (slightly), the Seiko SKX is a watch that commands a status not many other watches do, especially at its price point. It is often suggested as the best option watch for those starting their journey into automatic watches. As an ISO-rated dive watch that wears wonderfully on a variety of wrist sizes with a reliable movement from a juggernaut in the watch industry, it’s hard to compete with. Enter the Seiko 5KX.

The SKX has often been said to be discontinued, but with the supply seeming to never end, it was often speculation. However, Seiko launched a new line in their “5” category of watches. When the first images leaked, Internet sleuths identified that most of the watch resembled the SKX. When the specs came out from Seiko, many feared that the new “5KX” would be a watered-down version of the SKX. It would simply be Seiko pandering to the demand and popularity of the SKX by offering a variety of colorways but omitting many of the traits that made the SKX what it was. 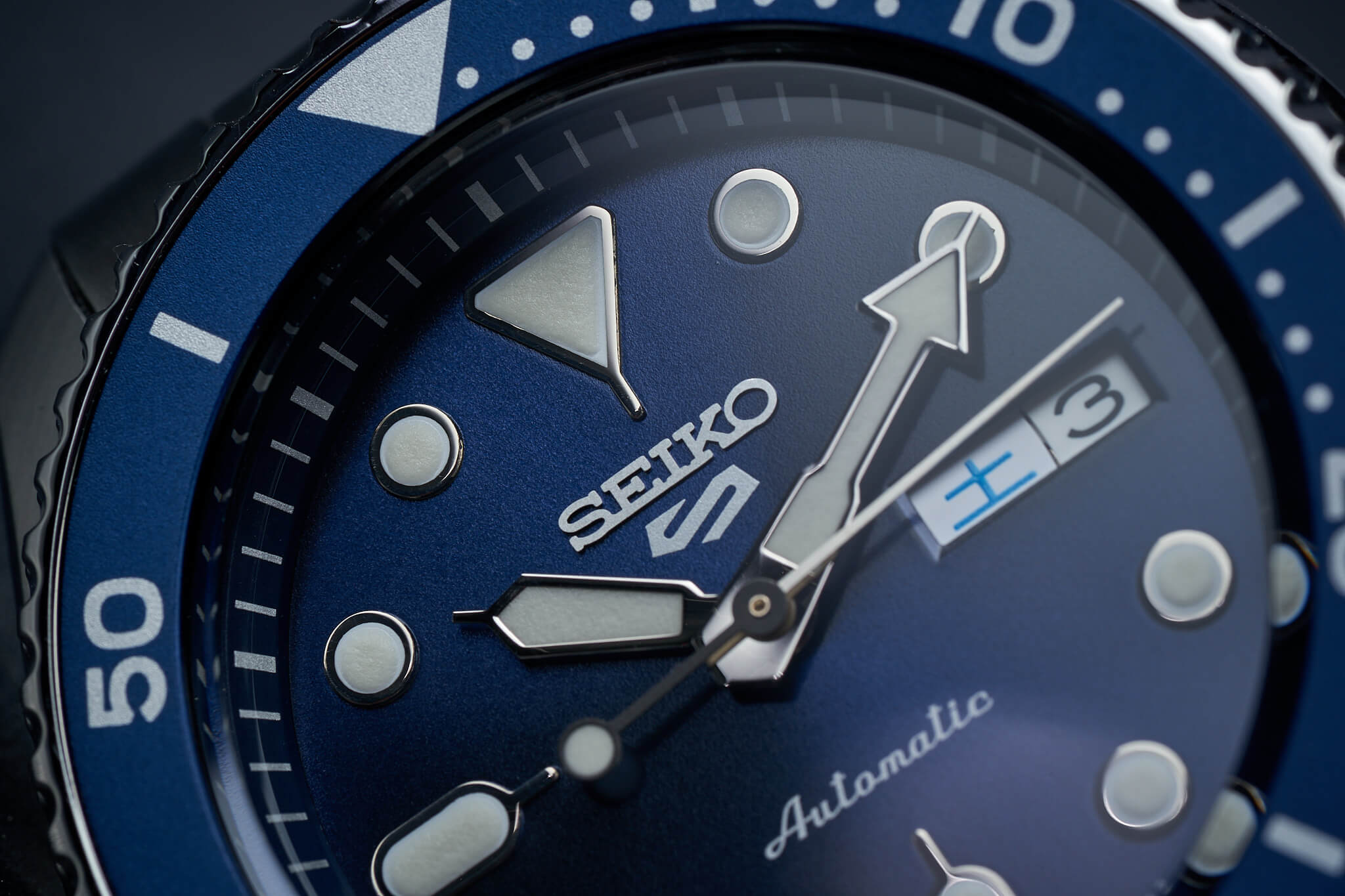 The King is Dead, Long Live the King

In this review, I compare the SKX and the 5KX side by side as it is a comparison many want to see. With that said, this watch can stand on its own and I also review it as such.

The first thing I noticed upon unboxing the new model was the dial. Harkening back to dials from the SKX171 and SKX031, the dial contains applied markers and an applied logo. The fully printed dial from the SKX is gone and replaced with what some would consider a more desirable trait. The polished surrounds of the markers and the Seiko logo stand out prominently and look absolutely fantastic when they catch the light. 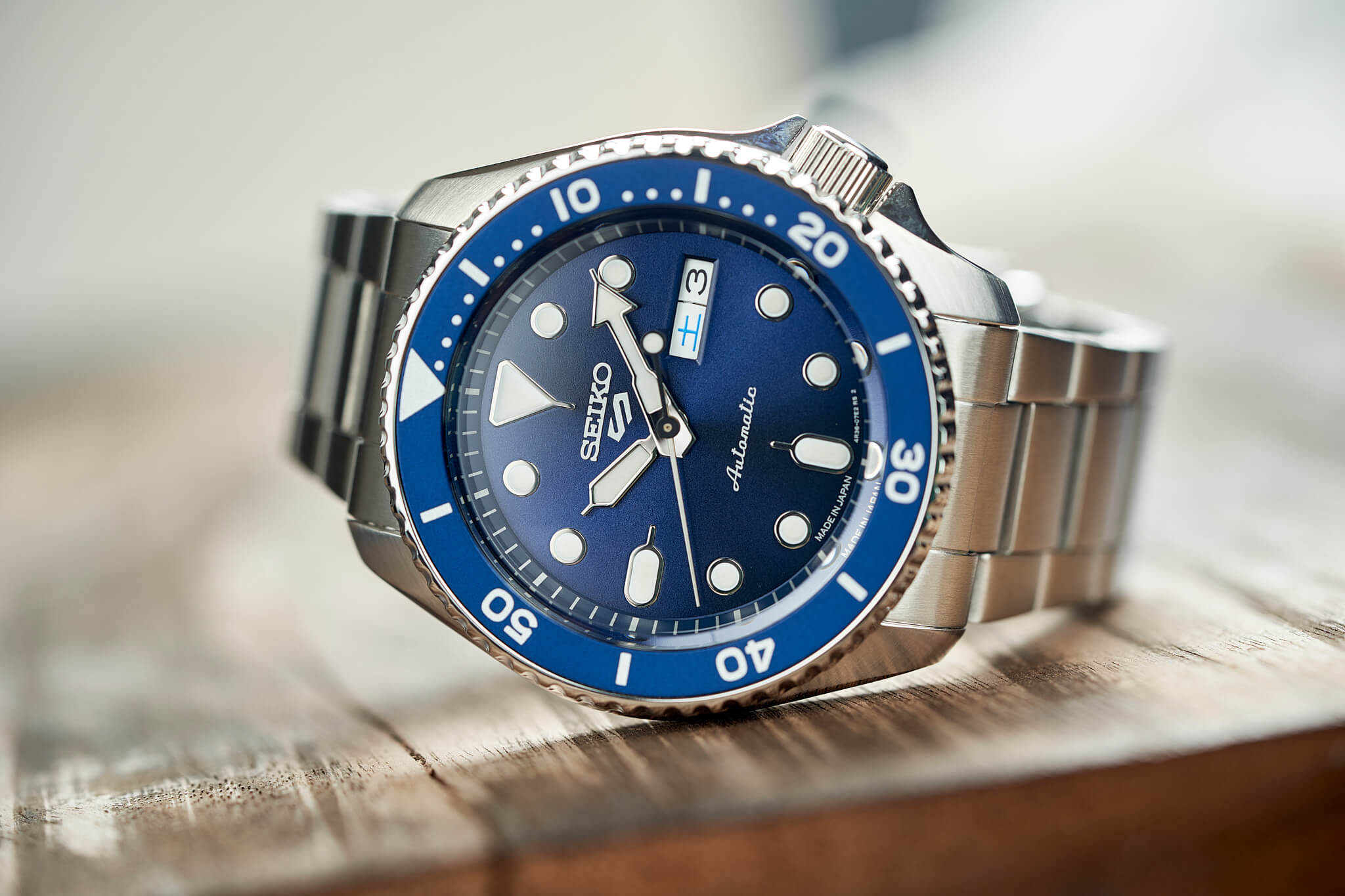 With 27 different options to choose from, the 5KX is sure to please all comers.  While more modern options like a blacked-out version and textured dials are available, I opted for the more conservative blue sunburst dial of the Sports theme. Seiko has chosen five themes for the new line (Sports, Suits, Specialist, Street, and Sense) which all have slightly different dial, bezel, case color, and strap characteristics.

The sunburst blue is well-executed and reminds me of the blue Alpinist’s dial that was released earlier this year. It allows for a nice contrast between the dial, the markers, and writing applied to it. When hit with direct lighting, the sunburst shines brightly while appearing matte in indirect lighting.

There are two sticking points with the new dials for some: the new 5 logo under Seiko and the word Automatic at 6 o’clock. A departure from the older 5 logo that many are familiar with, the new 5 logo resembles a snake and looks more modern. It quickly grew on me and I felt it fit with the overall design of the watch. The script Automatic appears to be an homage to Seiko’s older models on which this text and font were commonly used. If Seiko’s intention was to pay homage to those watches then it has been well executed. 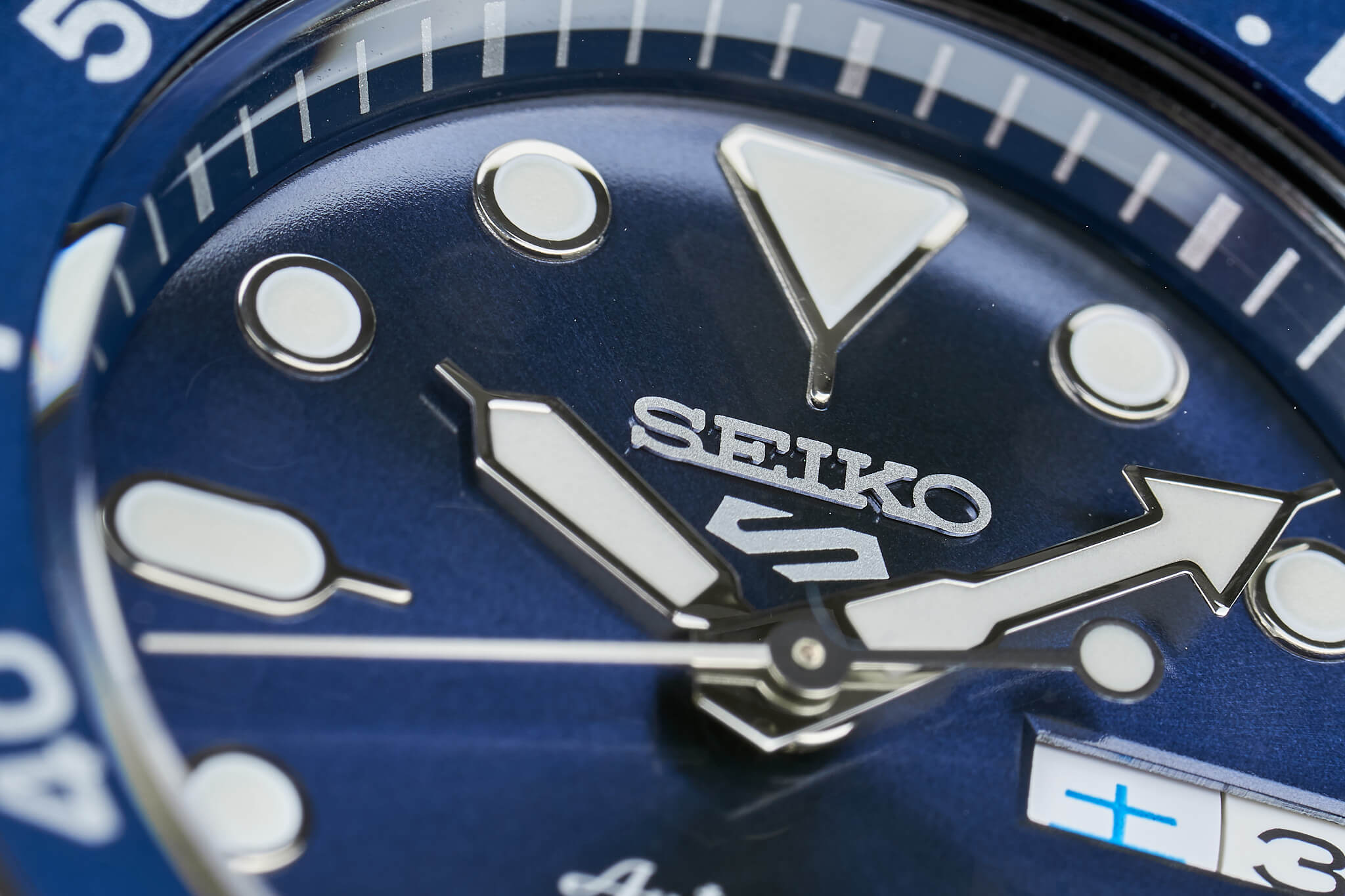 The remainder of the dial is familiar to anyone who has seen an SKX. The chapter ring contains white hash marks bolded at each 5-minute increment. A day/date window is still present at 3 o’clock and has a white background with black text on all models apart from the Street- themed models which have black-background day/date wheels. The model I have for this review is a JDM model and has the much desired kanji day wheel; I cannot say if all models available for purchase have this. If this is important to you, I suggest looking for one of the JDM models.

The markers, hands, and lume pip on the bezel are all filled with Seiko’s proprietary LumiBrite. The lume glows brightly in the dark and is even visible during the day if you stand the shade. 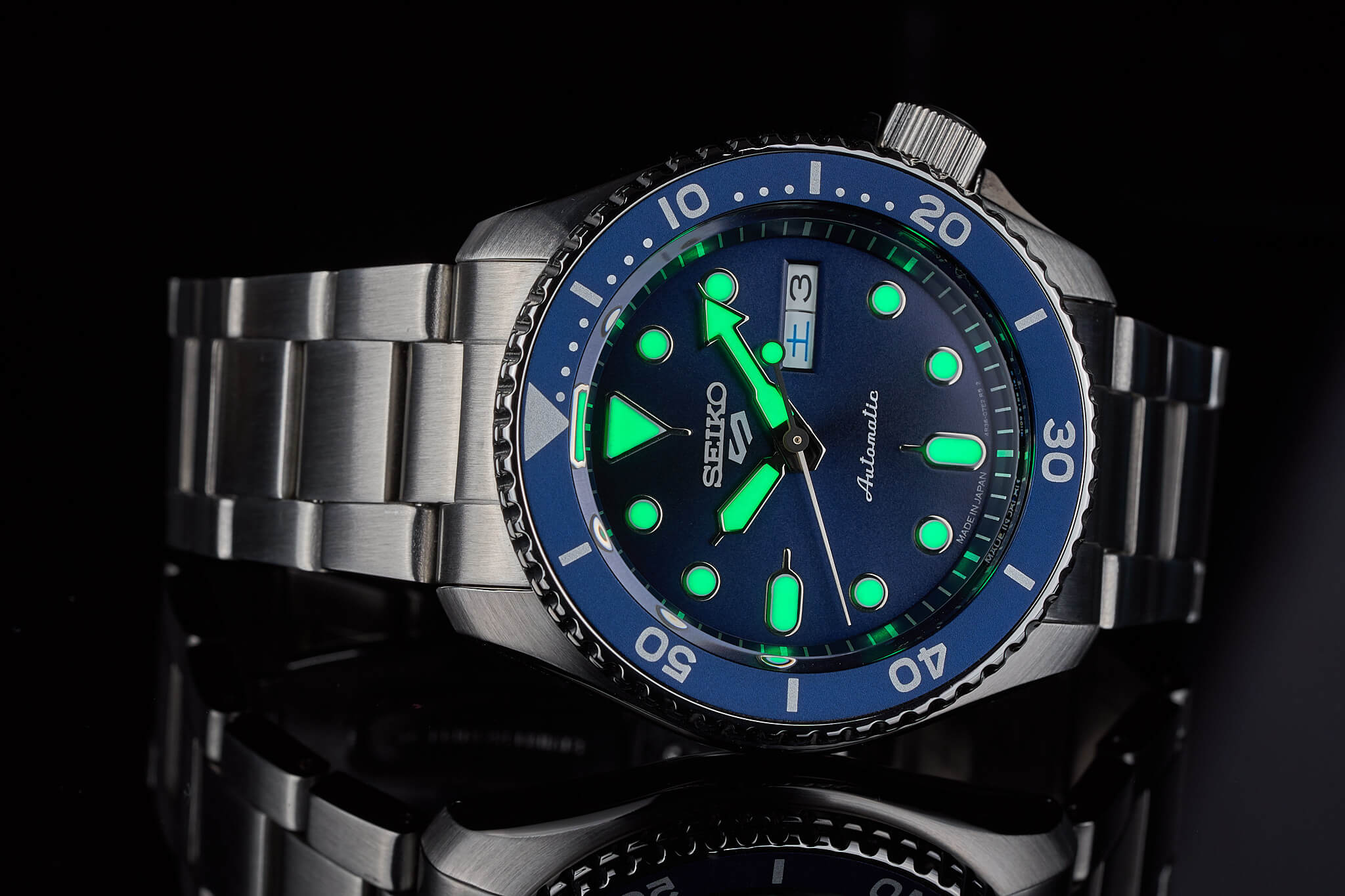 The case is a clone of the SKX’s case. The size, thickness, and fit are all the same. The Seiko magic is still present on the new models and I’m happy to say that it is still one of the best-fitting 42mm watches on the market. There are 2 changes Seiko made to the case however; one positive and one negative. On the plus side, Seiko has added drilled lug holes, which makes strap changes a breeze. Unfortunately, they moved the lug holes. This means your current fitted straps and bracelets from your SKX do not fit without modification. With that said, Strapcode, an aftermarket manufacturer of bracelets, has released proprietary curved spring bars which they say allow their SKX bracelets to fit the new models. 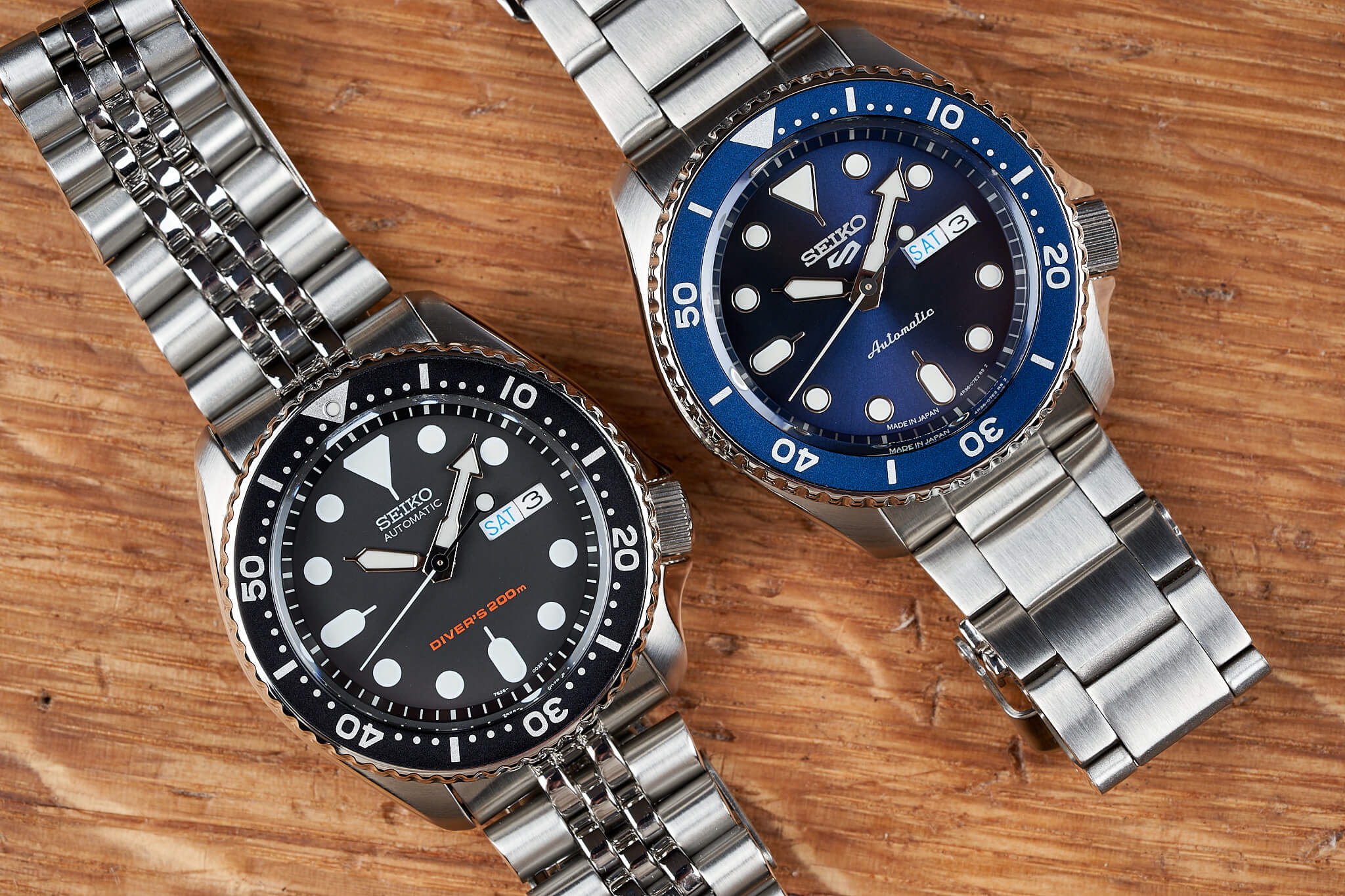 Those with a keen eye have noticed Diver’s 200m is no longer on the dial of the 5KX. The new models are not ISO-certified and only have a water resistance rating of 100 meters. Part of the reason for this water resistance rating reduction is the loss of a screw-down crown. As with all other Seiko 5 watches currently available, the 5KX has a push/pull crown.

I’m going to come out and say it, this really doesn’t matter. Unless you are in the 0.1% of people who dive with their watch, you’ll be fine with a push/pull crown and 100m of water resistance. That being said, many people want the screw-down crown just to have the extra security and that want is completely justifiable. If you are familiar with Crystal Times, they offer a kit to convert your 5KX to the SKX case with a screw down crown. Of course, this makes the watch cost almost twice as much and requires modding, but it is available. 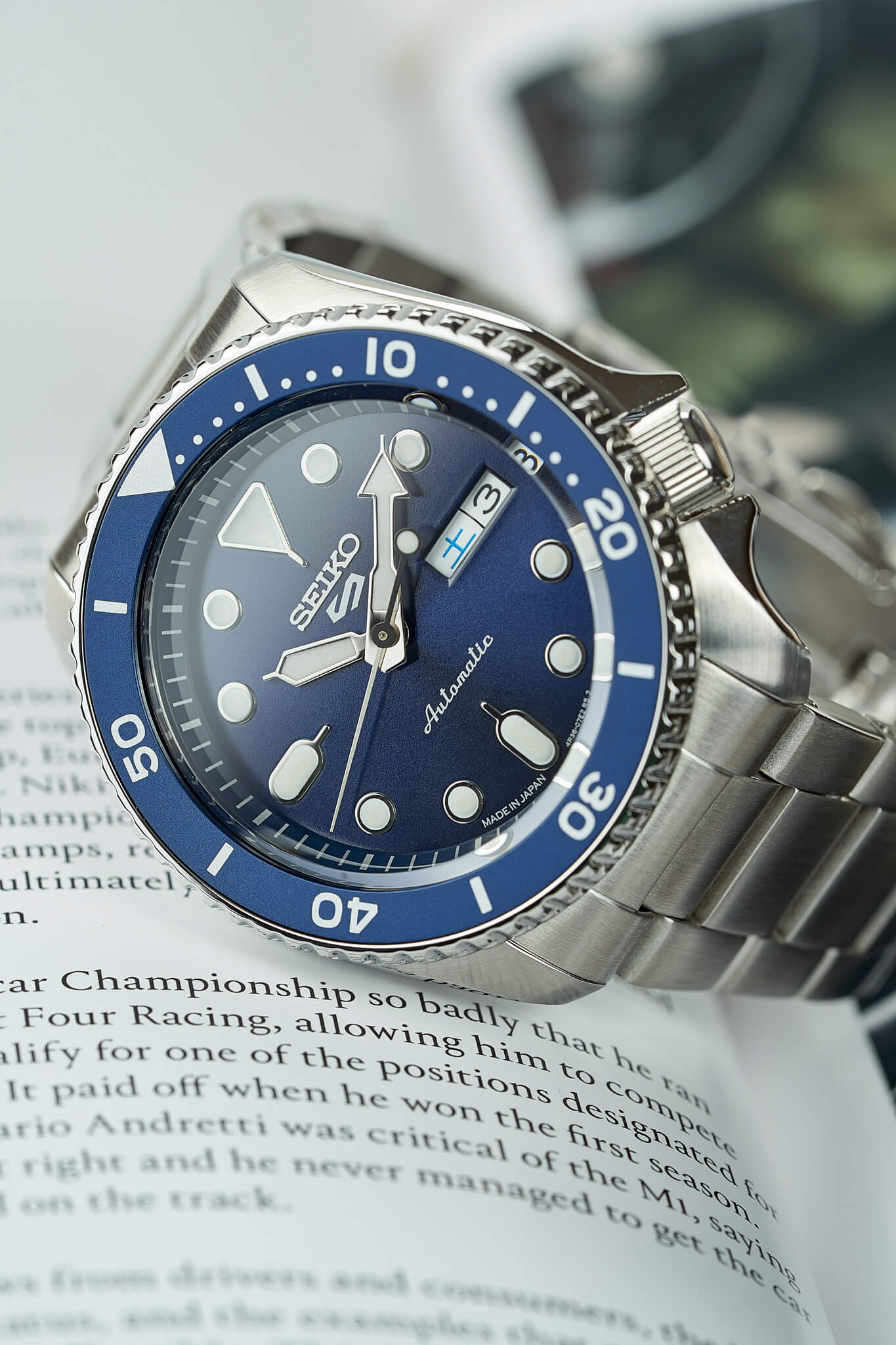 Featuring Seiko’s 4R36 movement, the 5KX does have an upgraded movement from the SKX’s 7S26. Gone are the days of the Seiko Shuffle to get your watch going. It is convenient to wind the watch without unscrewing the crown but because of the shape of the crown guards, it can prove cumbersome. The SKX’s crown guards are big, especially underneath the crown, and make you want the crown to be out a little more when winding.

The bracelet offered on this model is Seiko’s Oyster-style bracelet and is fairly comfortable. Unfortunately, it does not taper and is 22mm all the way around. Given that Seiko has produced one of the most comfortable bracelets with the SKX jubilee, I would love to see them offer it again with these models. 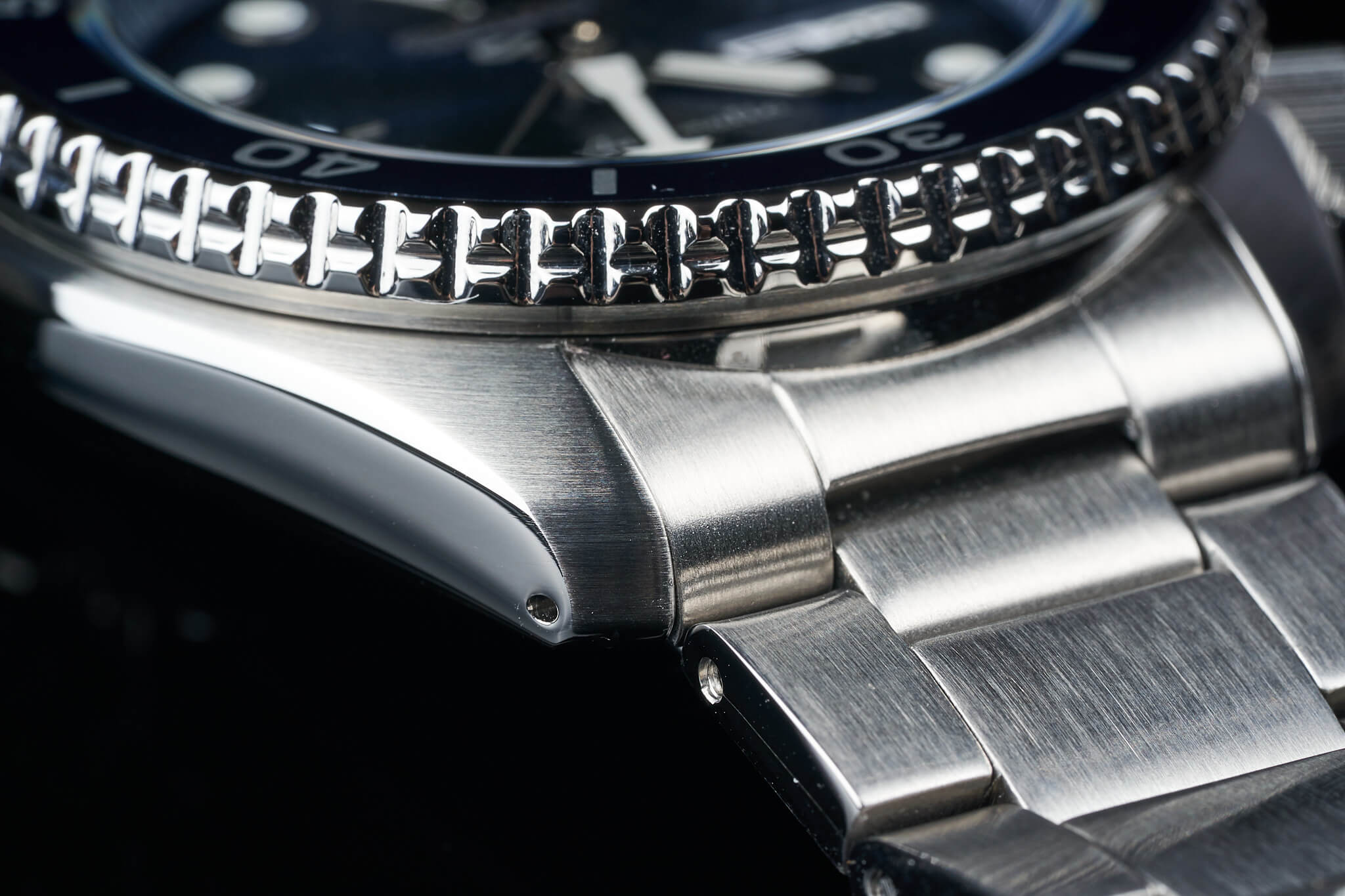 Another change from the SKX is the exhibition caseback. Most existing Seiko 5 models have an exhibition caseback like this one so it’s fine in line with the existing line of Seiko 5s. It was a bummer to not see the Seiko wave on the caseback that is such a staple of the SKX line.

Bezel action on the 5KX is what you would expect from Seiko. Easy to turn with satisfying clicks and no back play, the bezel is just as good as the one on the SKX. It appears to me that no changes have been made from the SKX, including the layout and markings which are all the same. The only difference is the color. 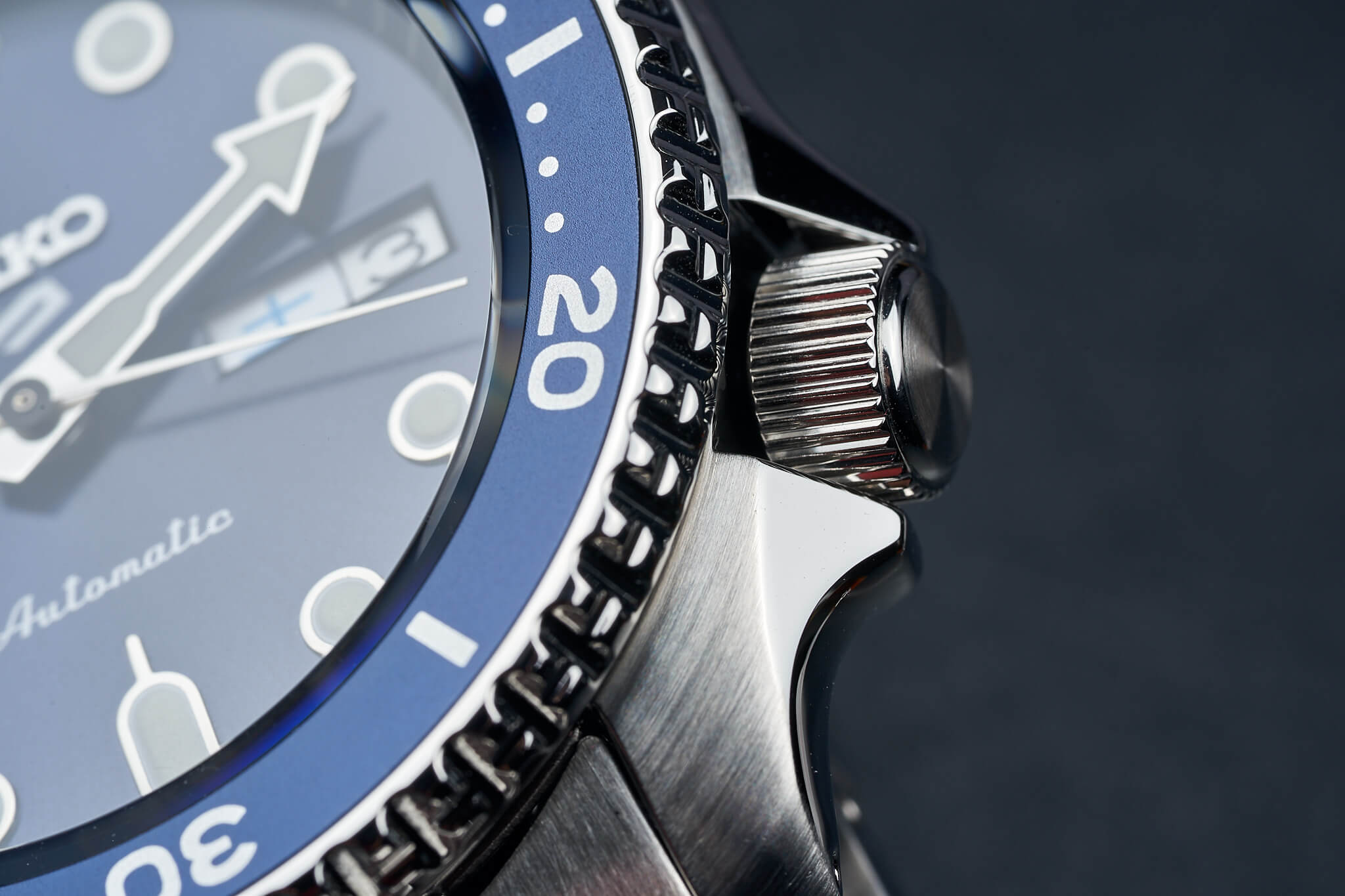 As the 5KX isn’t changed as far as proportions are concerned, it wears just as well as the SKX. If you have ever worn an SKX, you know what to expect and should be happy with the fit of the watch. For the uninitiated, you’re in for a treat. 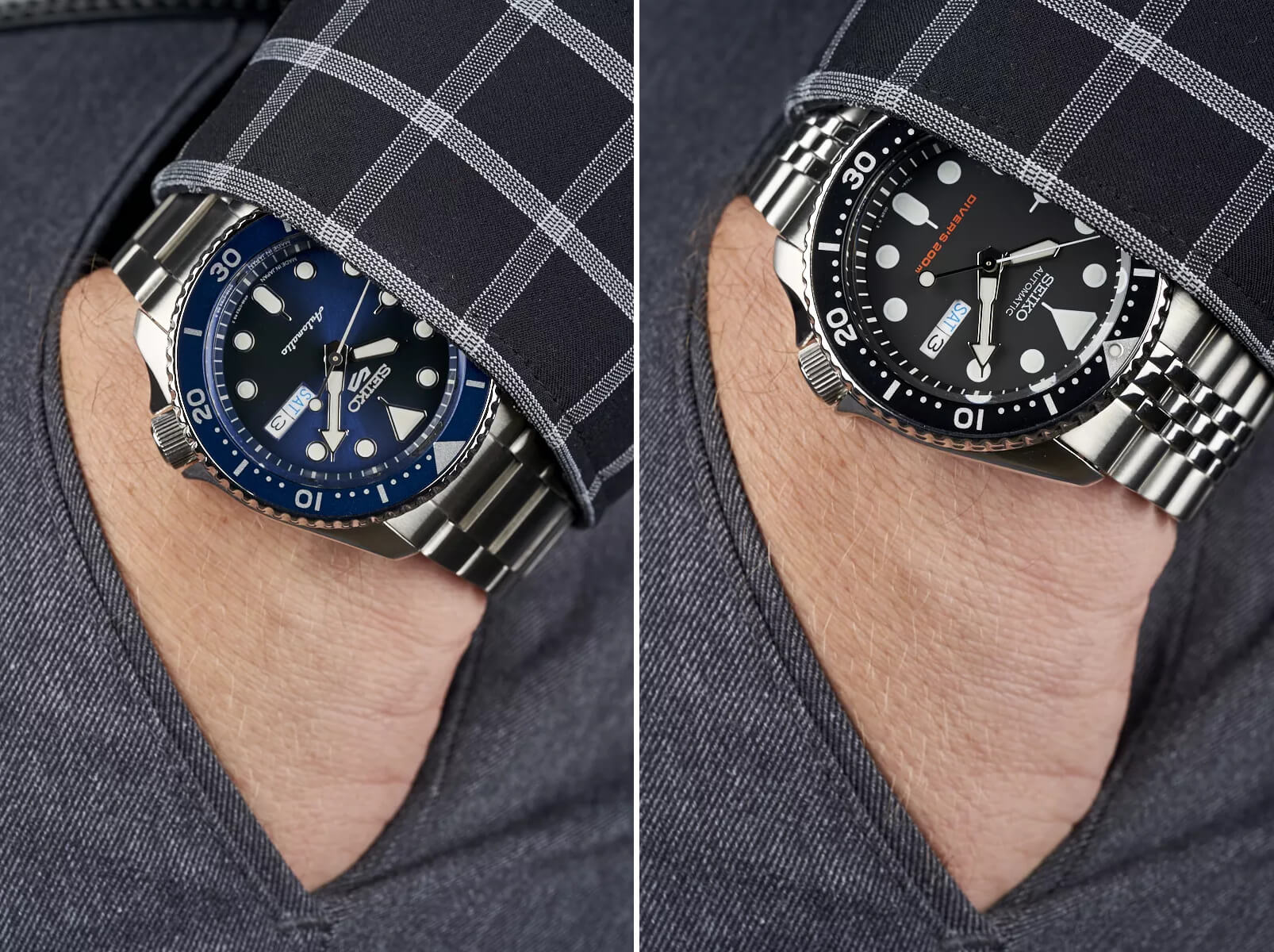 One area that the SKX lives up to the hype in is how it feels on your wrist. The 5KX obviously shares the same hype. Actually measuring 42.5mm, the 5KX isn’t a small watch yet somehow it wears like a 40mm watch. At only 46mm lug-to-lug, part of what gives the watch the great feeling it has, it wears well on almost any wrist size. If your wrists are large or small, the 5KX looks right at home.

At 13.25mm thick, it is not an overly tall watch. If you are not wearing it on a NATO-style strap, the 5KX should be able to slide under your shirt cuff without too much of a hang-up. With that said, you might see a slight bulge in your shirt cuff. 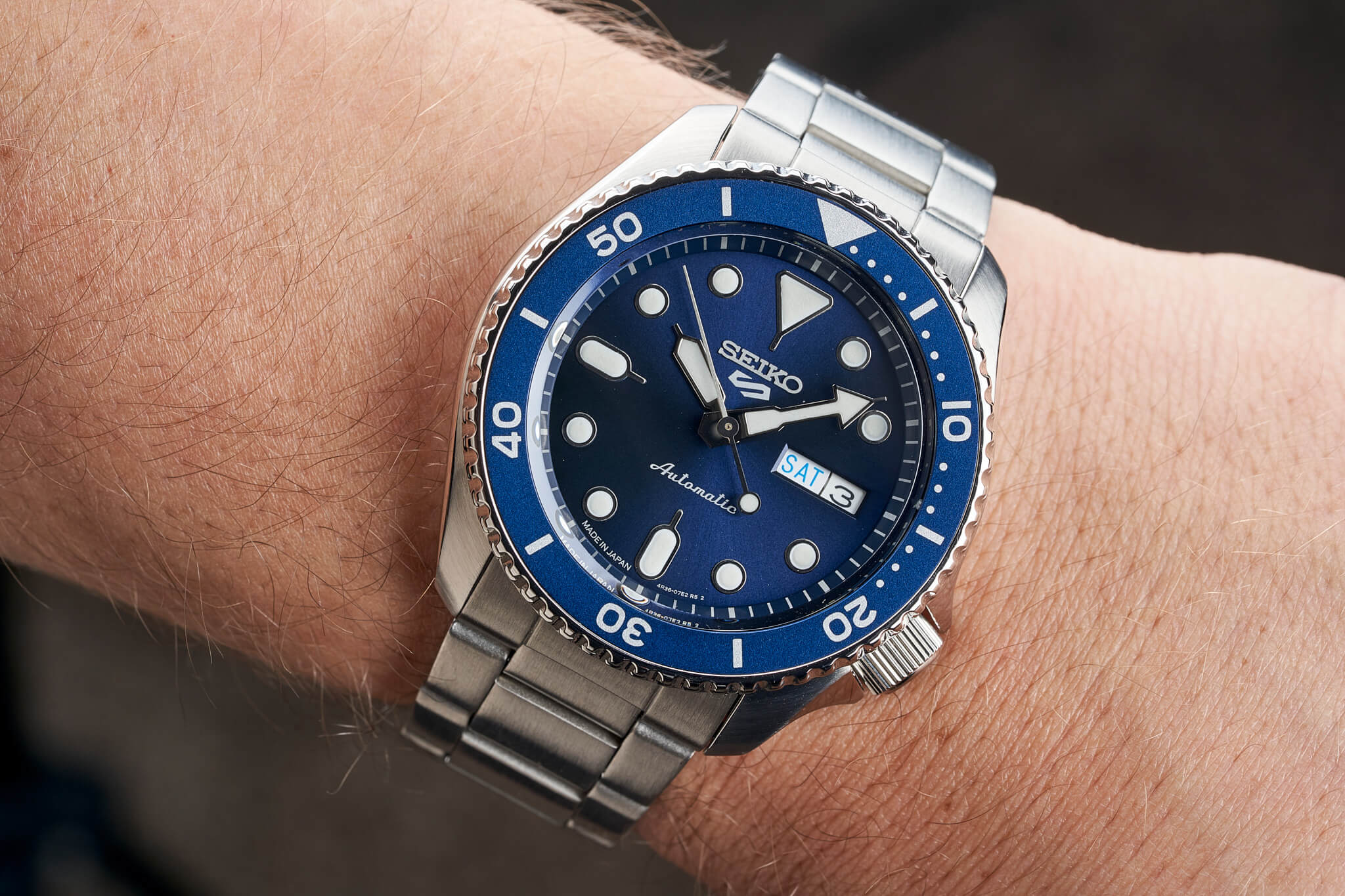 I wore this 5KX in a variety of situations and never felt it to be inadequate. I had no concerns about it getting wet when giving my child a bath, bumping it into something, or anything else. Aside from not having a screw-down crown, the 5KX is every bit as rugged as the SKX for the normal wearer.

Is it an SKX replacement?

The short answer is no. However, I only say this because I have heard through the rumor mill that Seiko is planning an SKX replacement that would maintain the specs and ISO rating of the original. Of course, these are just rumors and no one really knows what Seiko is up to. 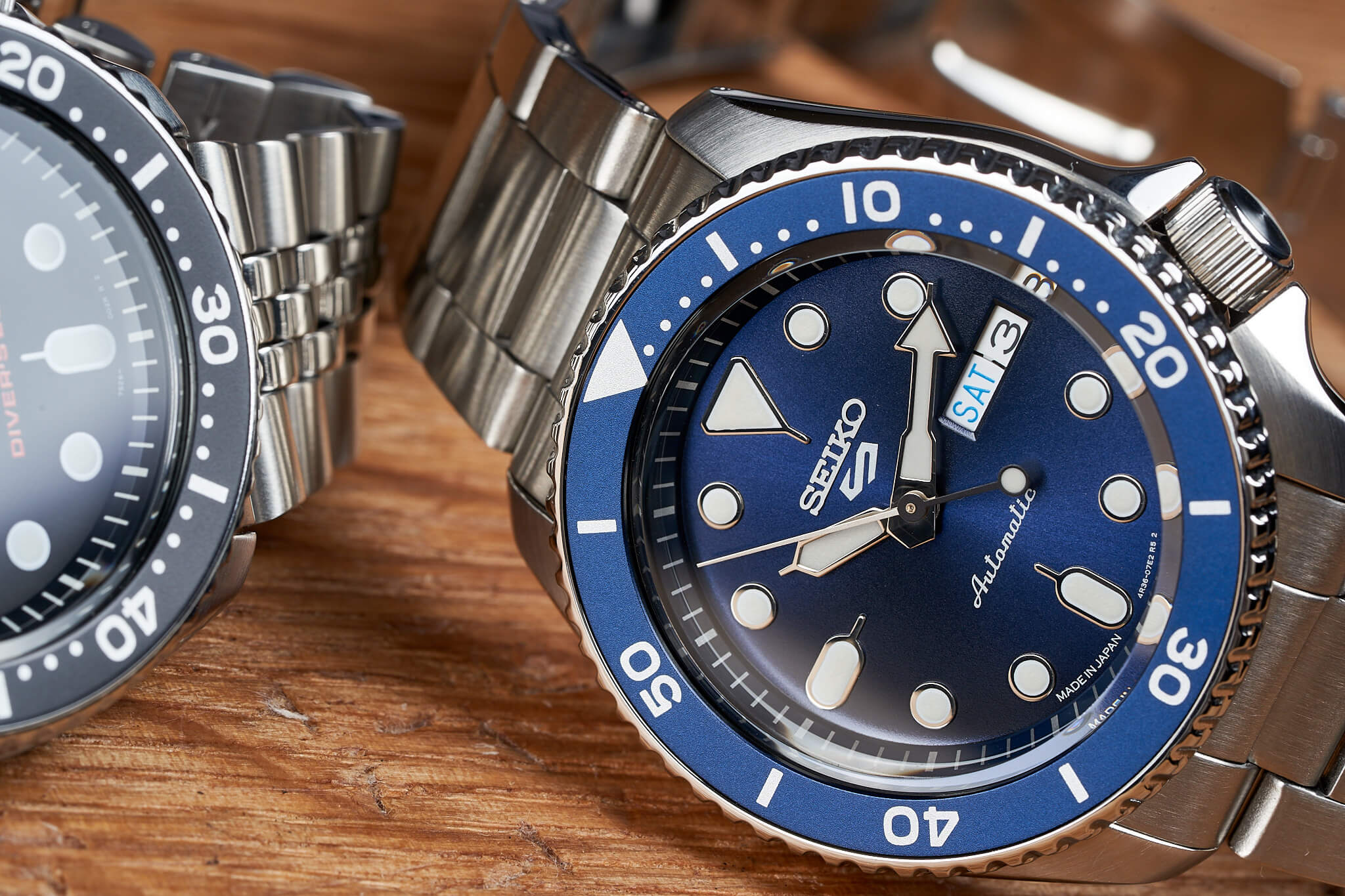 Let’s assume Seiko is not planning any other replacement for the SKX. For most, this serves as an adequate replacement. Seiko has truly given an option for just about everyone with the various colorways as well. I think Seiko is aware of the modding community and wanted those without that ability to have some options as well as put the money in their pocket. It will also be interesting to see how the modding community embraces this watch and what they do with it.

If you’re able to get past the push/pull crown and lower water resistance rating, this is the best SKX replacement you’re going to get for the time being. 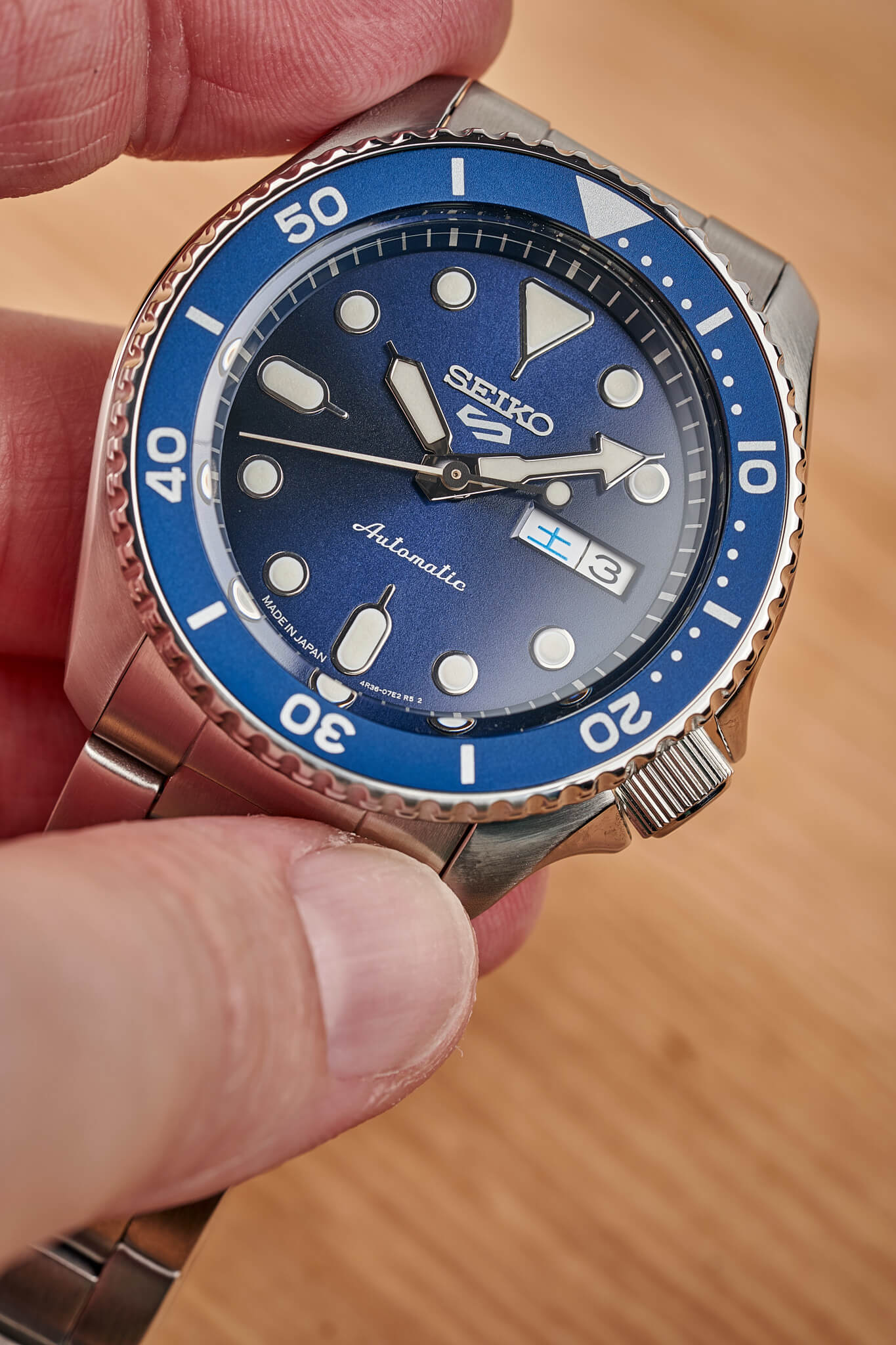 My biggest gripe with the SKX007/009 was the lack of applied markers. It’s part of the reason I love the SKX171 and SKX031 so much. The applied markers and logo add extra depth to the dial and dress up the watch without taking the tool out of the tool watch. Seiko has solved that problem here. It is refreshing to see them add that element back to the 5KX dial. 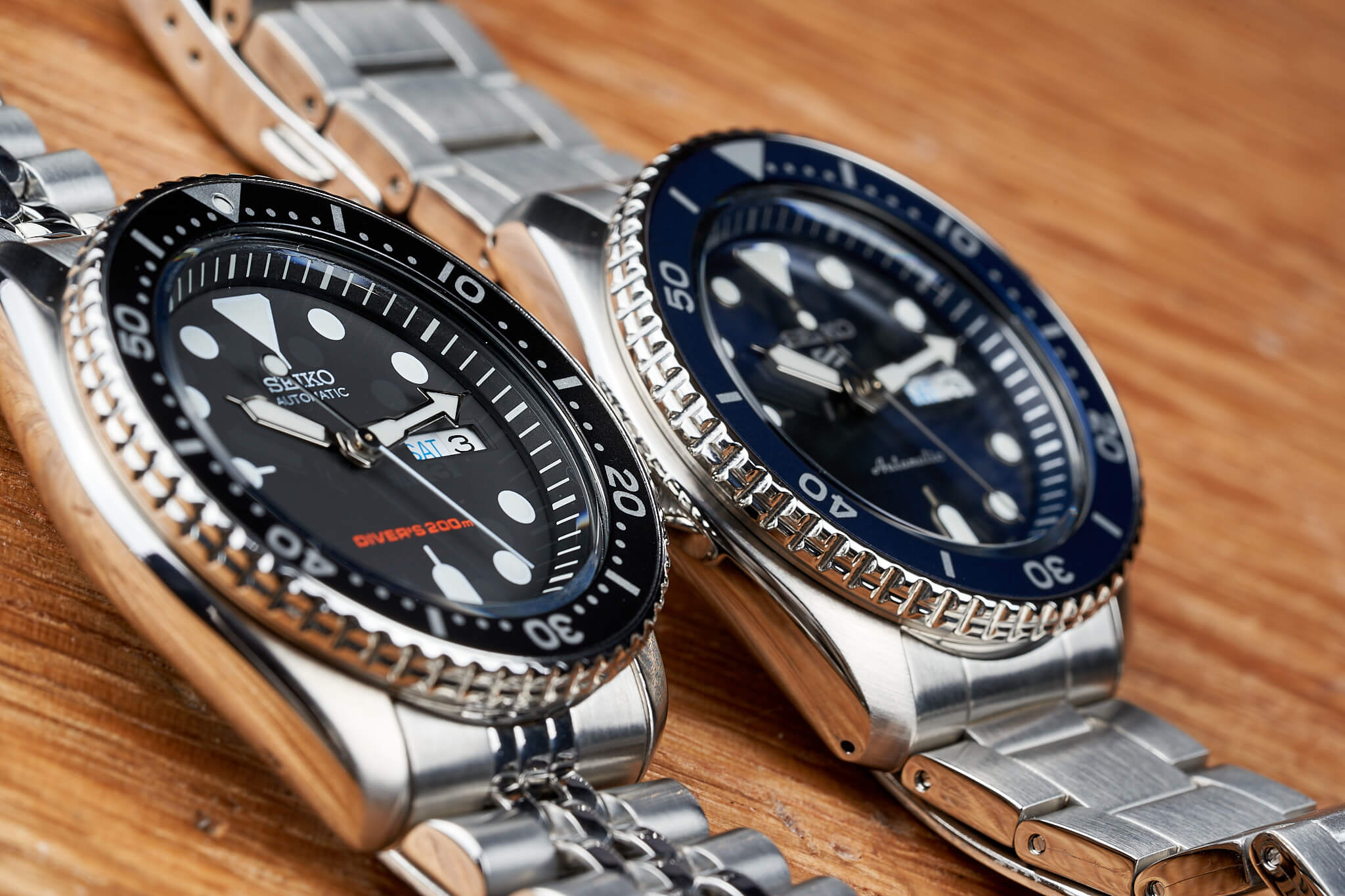 I enjoyed wearing this watch almost more than I enjoy wearing the SKX. Where the SKX is simple and flat, the 5KX pops with color and has depth to the dial. I would have been happier if Seiko had not moved the lug holes, thereby allowing me to use the plethora of bracelets I have for the SKX.

“Is there a place for the 5KX in today’s market?” That is a question that has already been asked and continues to be asked. Part of the reason for this question is that the SKX is still available to buy new. There is almost no doubt that Seiko has officially discontinued the SKX as we know it today and it makes sense with this release. In a few months’ time, the 5KX is likely to be the only way to get a Seiko with an SKX case and dial configuration.

More Images of the Seiko 5KX