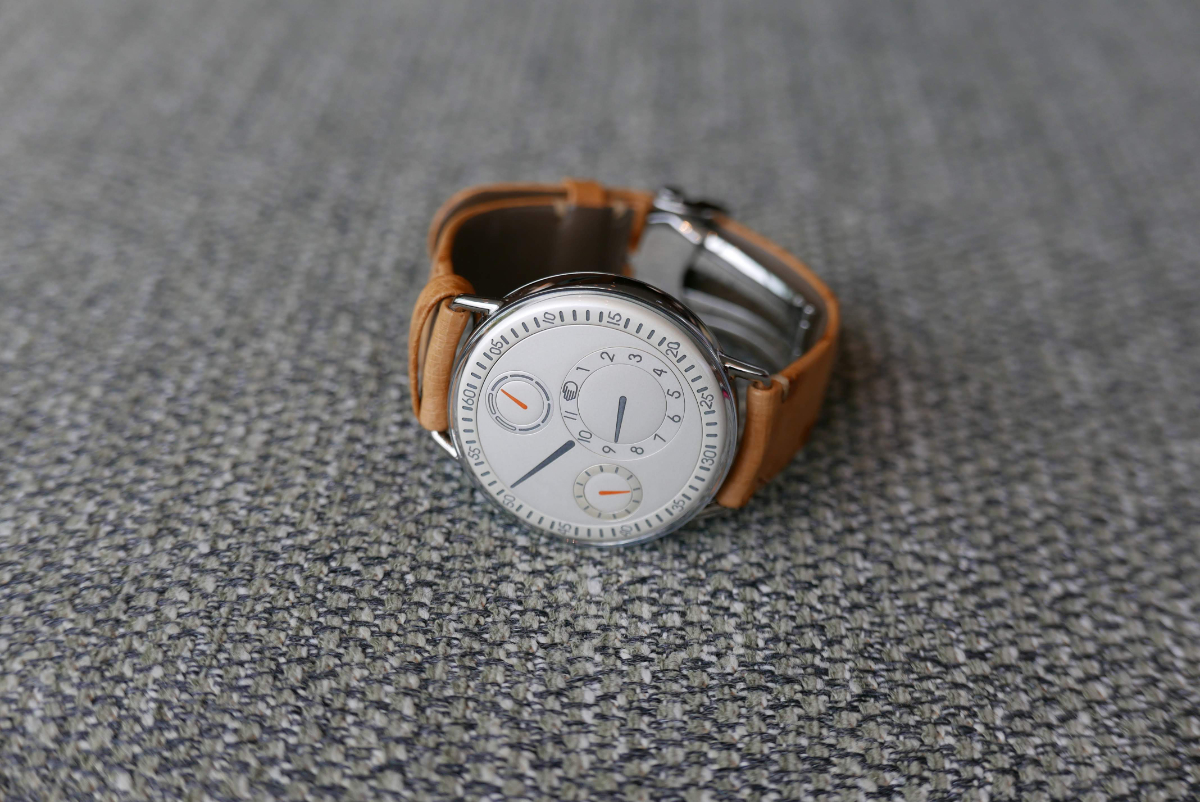 Three hands pointing at numbers, or a digital display. Take your pick. Those have been the only ways of presenting time since the dawn of precision timekeeping. Sure, you have your star wheels or retrograde jump hours, but they’re slight variations on the tried-and-true format we’ve come to be familiar with for hundreds of years. If it ain’t broke, don’t fix it. That is, until Ressence came along and decided, “Screw that!”

For a company whose motto is “Beyond Hands,” it’s ironic that their logo is, in fact, a hand. However, this simple motto carries through in the DNA of their watches. Founder Benoit Mintiens, a Belgian industrial designer, sought to deconstruct the traditional watch to represent time in a completely different, yet wholly intuitive, way. 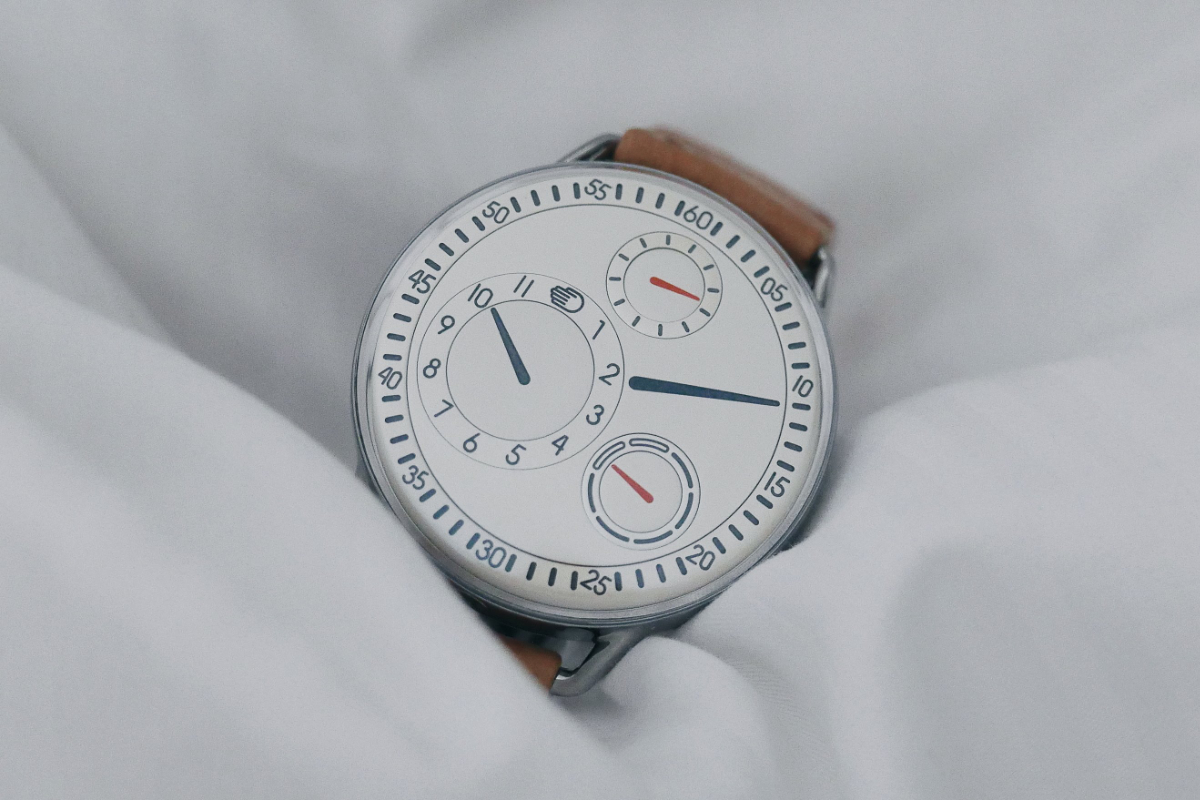 The Beyond Hands Movement

When the Type 3 was released in 2013, it took the industry by storm and took home the Horological Revelation award from the Grand Prix d’Horlogerie de Geneve. This was a watch that had a series of rotating discs, an oil-filled chamber, an air-filled chamber, magnets to link the two chambers, and, somewhat bafflingly, an ETA movement. All of this cost a whopping $42,000. In 2014, they stripped back all the bells and whistles of the Type 3 and released the Type 1. Gone were the two chambers, the temperature gauge, the date track, and the magnets. What remained was the purest expression of their concept to date.

What do you get with the Type 1? It’s 42mm in diameter and 11mm thick. The grade 5 titanium case is sandwiched by sapphire crystals, making it an incredibly light watch at a touch over 70g. These factors, along with the short, wired lugs, make the Type 1 sit beautifully on the wrist and easily disappear under the cuff. The wearer may not want to forget that it’s there in the presence of water, as its paltry 1ATM water resistance may make him consider staying away from any form of moisture.

Some may deride Ressence as a watch with an ETA movement, but this is a complete disservice to the brand. While the base is indeed an ETA 2892 movement, it could be considered an in-house movement after all the modifications Ressence has made to it. At the heart – or rather, surface – of all this is the Ressence Orbital Convex System, or ROCS. In the Type 1, this is a combination of 107 parts consisting of 27 gears and an additional 19 jewels, displaying hours, minutes, seconds, and days.

The way the ROCS operates is a testament to the ingenuity of Ressence and its team of engineers and designers. Essentially, the point of the base calibre is to provide power to the watch and its minutes track. The ROCS module is then driven by the ETA’s minutes axle to display time. Want hours? Just slow it down by 60. Want seconds? Do the opposite. Want the day? I’m not going to bother with the math for that. There’s a reason why I am not working for Ressence. All of this information is then displayed by planetary discs that rotate around and within the entire dial.

At first glance, it might be difficult to read the time. The main minutes dial is constantly in motion, as are the sub-dials within it, so the whole dial is changing with each passing second. However, it doesn’t take long before you intuitively figure out where the hour sub-dial is in relation to the minutes, and that’s how you tell the time. Ressence’s decision to make the minutes dial the focus of this dial was to improve legibility, as in most cases, they feel the minutes are the first bit of information people look for when checking the time. 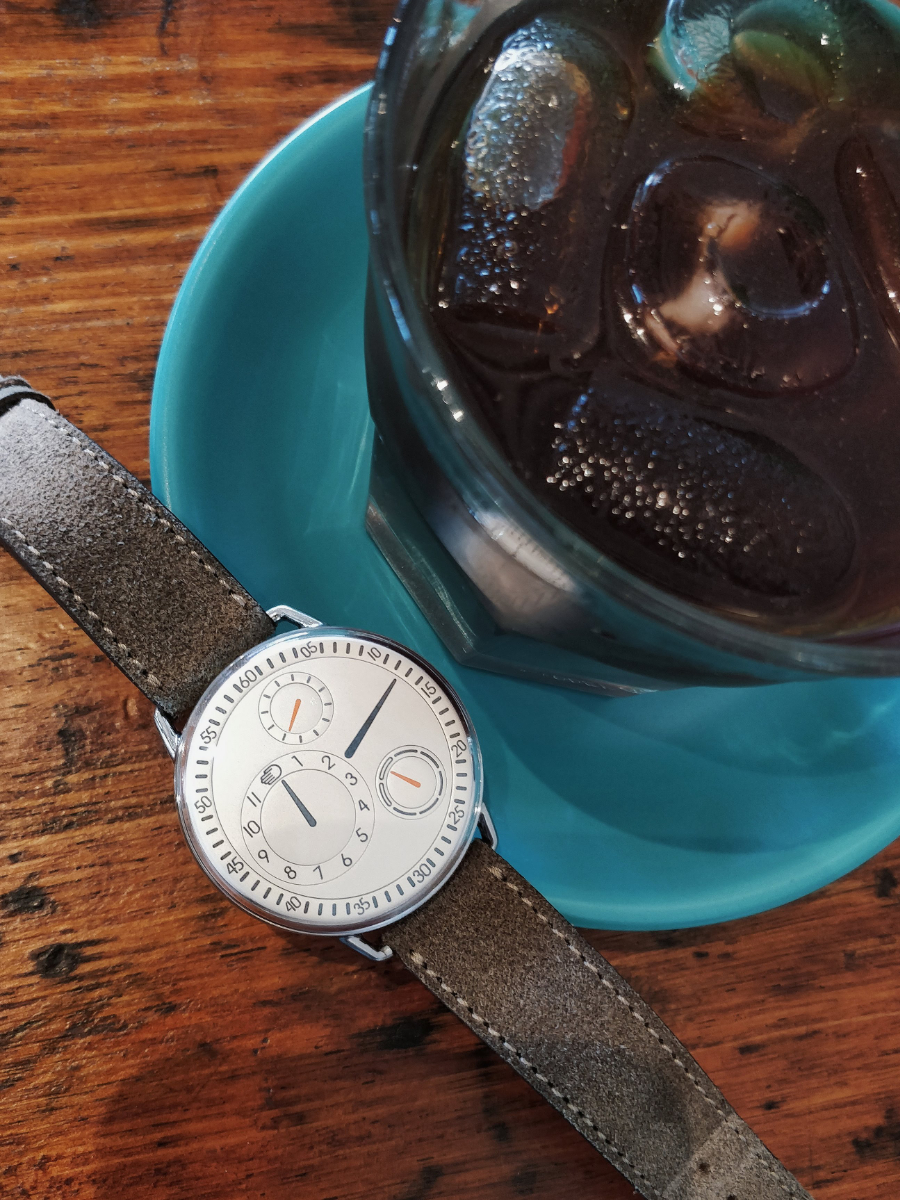 The legibility is also helped by the dial’s clarity. The slight curve of the dial itself that extends to the bezel-less edge, coupled with the flat crystal that’s been given an anti-reflective treatment, allows the dial to be viewed from almost any angle. The clear sharpness of the dial often gets this mistaken for its oil-filled bigger brother. It has a high-definition digital display type of appearance, but that’s just a testament to the quality and legibility of the dials.

Judging by the non-traditional looks of the Type 1, it is not one for a black-tie event. Its rather delicate construction and low water resistance means you probably shouldn’t take it to the beach or engage in any physical activities with it. It’s great to just strap it on and wear casually, forgetting about it until someone inevitably asks you about your very interesting watch. Its lack of heft and lugs that curve downwards make it very comfortable on the wrist. Lug-to-lug, it measures 48mm, yet it doesn’t wear large for a watch that is visually all-dial. 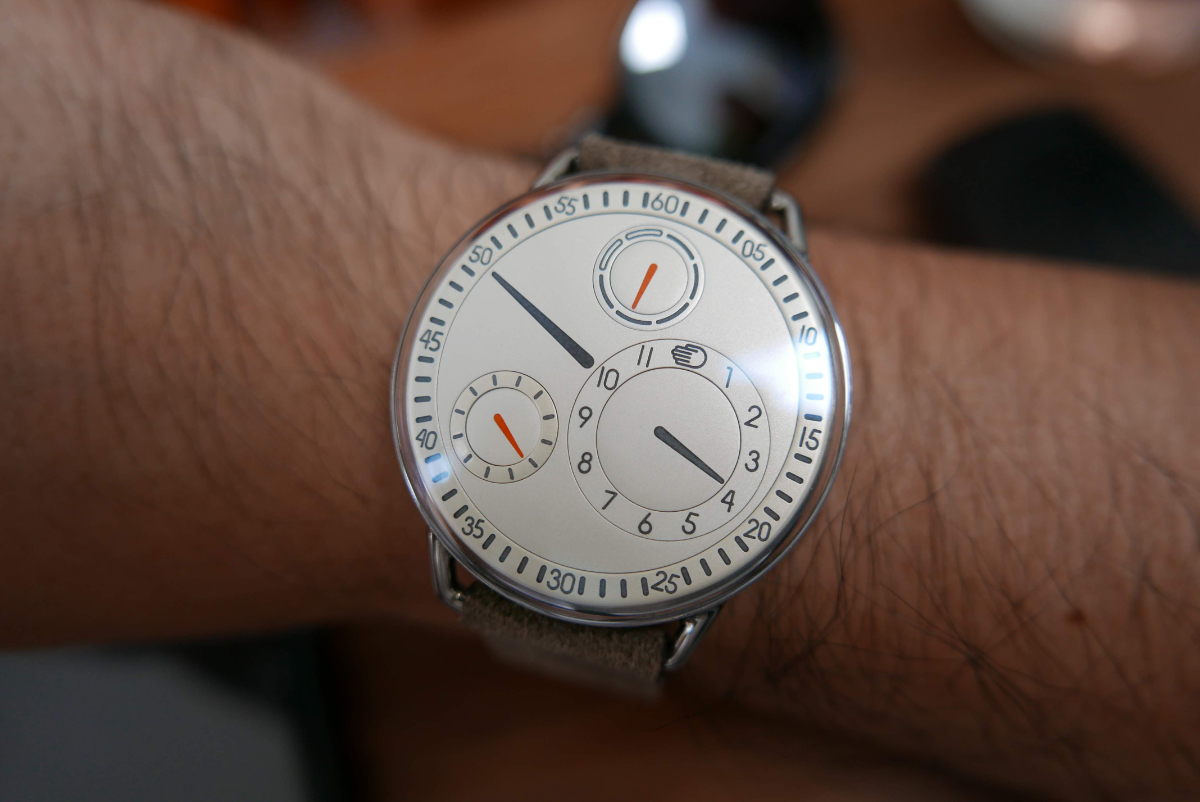 At 36 hours, the power reserve is down 6 hours from the regular ETA 2892. Not a huge deal, as the movement is required to power an entire new module on top of it, but it would’ve been nice if it was more efficient.

Changing straps is also a hassle as the wired lugs are much thicker than your average straps made to accommodate regular spring bars. These wired lugs extend to within the straps themselves, so either you’ll have to custom-make straps that have larger spring bar holes, or simply physically expand the hole with a spring bar tool until the lugs fit. 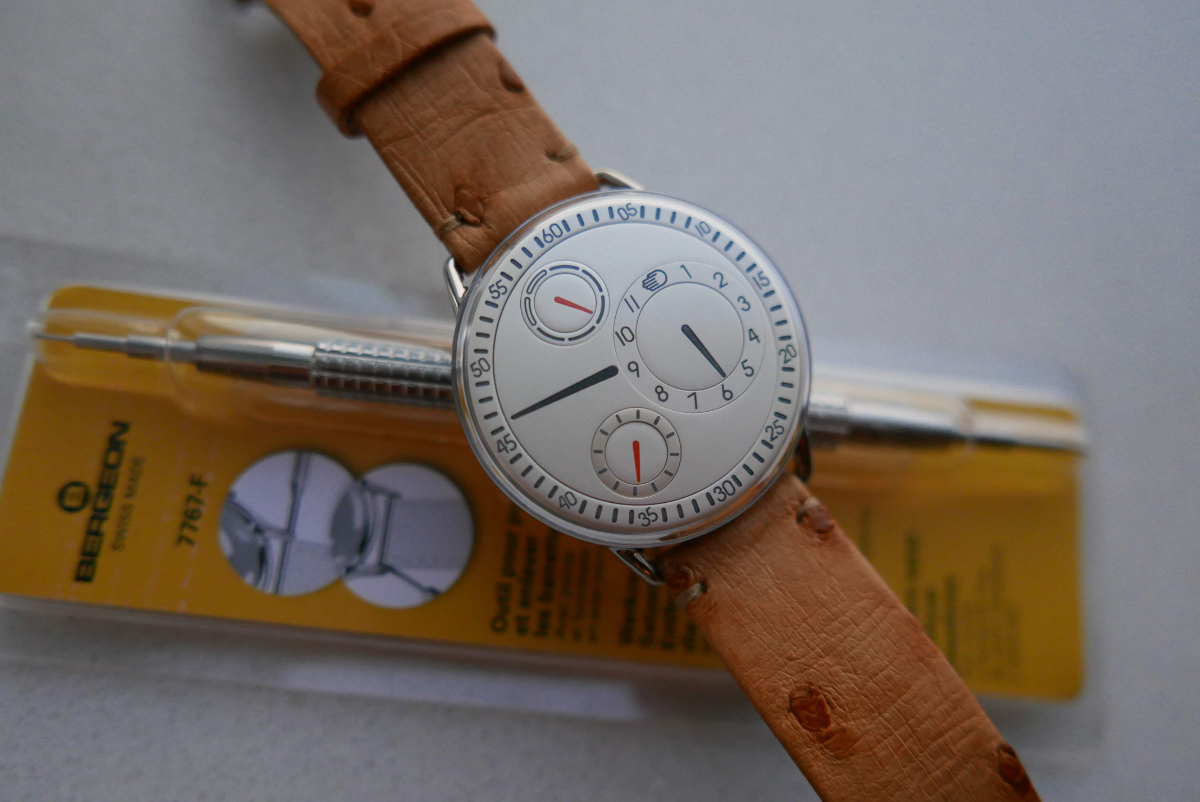 Curved spring bars would work but you would need a suitable strap.  This isn’t an issue if the wearer is happy with the original strap, which was a gorgeous egg-yolk-yellow ostrich leather strap. But, let’s face it, you can’t consider yourself a WIS if you don’t constantly change the look of your watch by swapping straps.

The biggest issue with this watch, however, is a result of their design ethos. As you might have noticed, a glaring omission from this watch is the crown. Everything is adjusted from the caseback, from setting the time to winding the watch.

Unfortunately, it isn’t easy to grip the thin caseback, nor to turn it. There is a lot of resistance turning it clockwise to set the time, as this direction also winds the watch. It also takes about 3 or 4 turns to advance or go back an hour. If you wanted to set the day, you would have to turn the caseback almost 100 times to cycle through 24 hours. This makes setting the day a tedious nightmare that I wouldn’t wish on my worst enemies, and I imagine most owners wouldn’t bother with it. 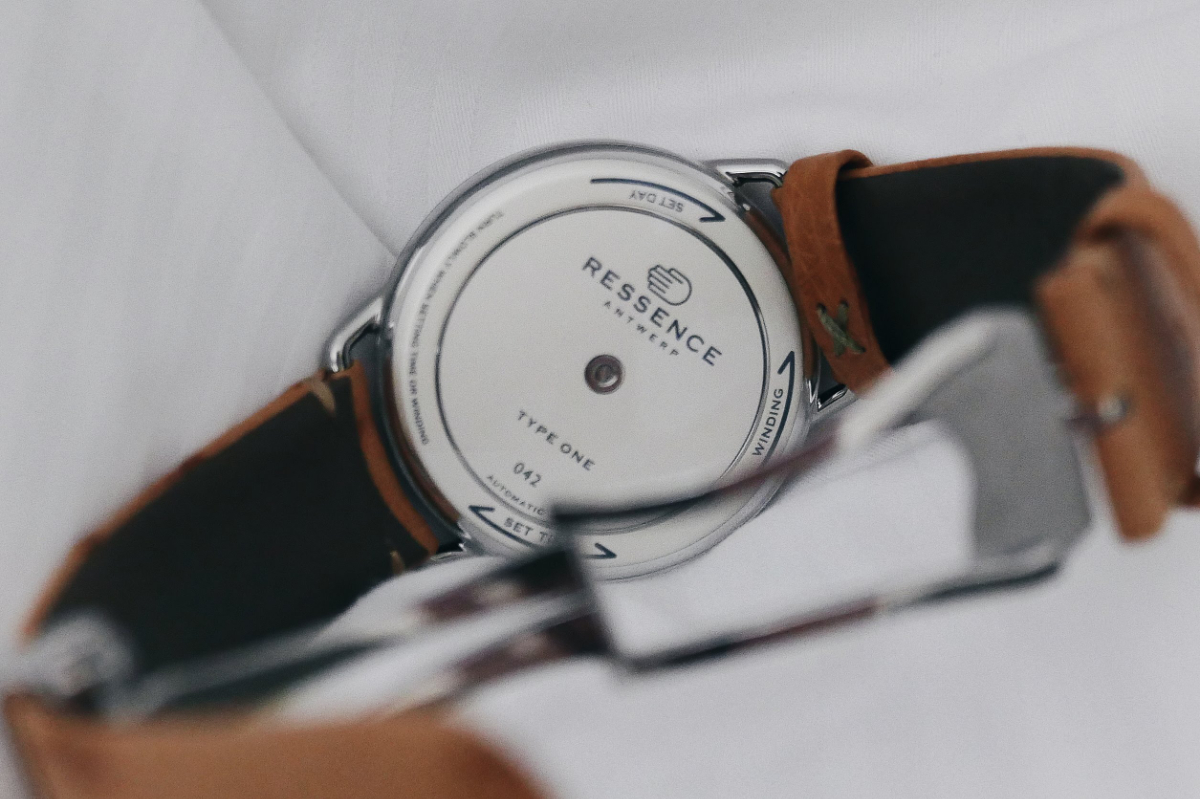 Thankfully, the latest models of the Type One come with a flip-out handle that make changing the time less of a gym workout.

With its unconventional looks and high price, this isn’t a watch for everybody. For someone looking for a watch outside of the major brands, especially towards independents, it might not even make it in the top 10 recommendations. Some watch enthusiasts may not have even heard of Ressence before. But that is what makes it so compelling. From those who know of the brand, to those who aren’t even into watches, they are all incredibly curious about it. It’s a great conversation starter, with the most frequently asked question being, “How do you tell the time?” 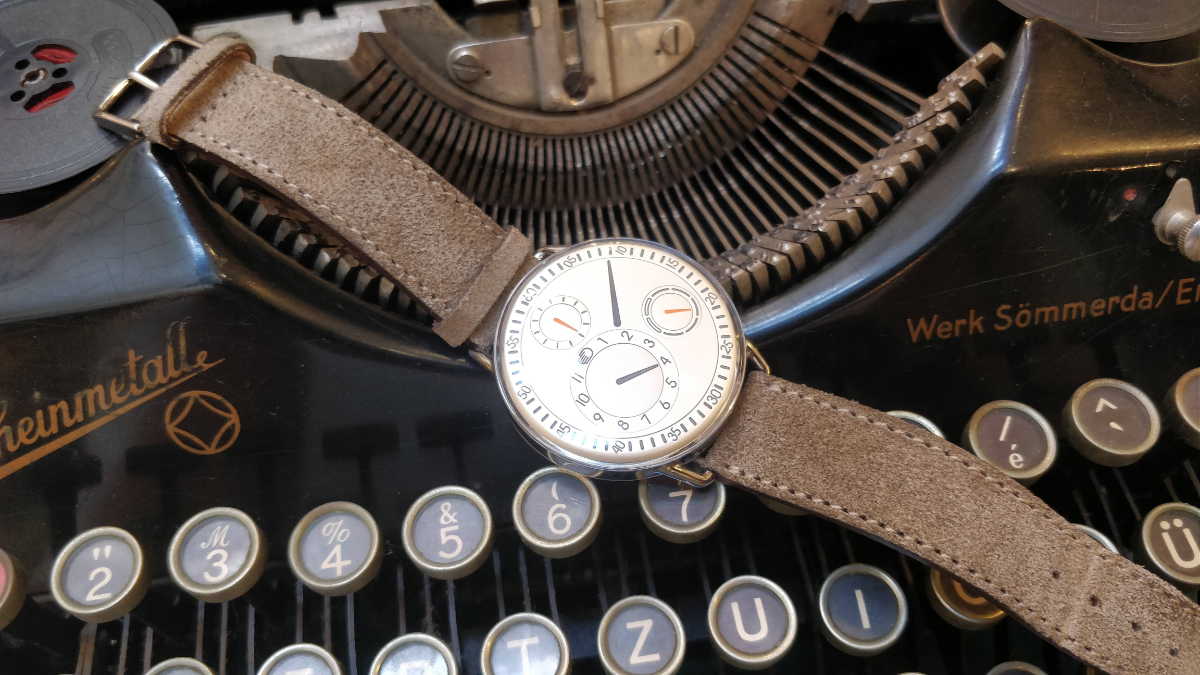 For those who enjoy their stouts barrel-aged, their coffee single-origin cold-brewed, their whiskey independently bottled and blended, this may be the watch for you. Or it may not be. And that’s completely fine too. With a watch that is so out of the ordinary, it’ll only appeal to a very niche range of collectors. It’s watches like these that are needed in the industry, to keep things refreshing and to push the boundaries of tradition. And what’s more refreshing than a dial that’s always in motion? Hands in motion? Nah, screw that.

More Images of the Ressence Type 1 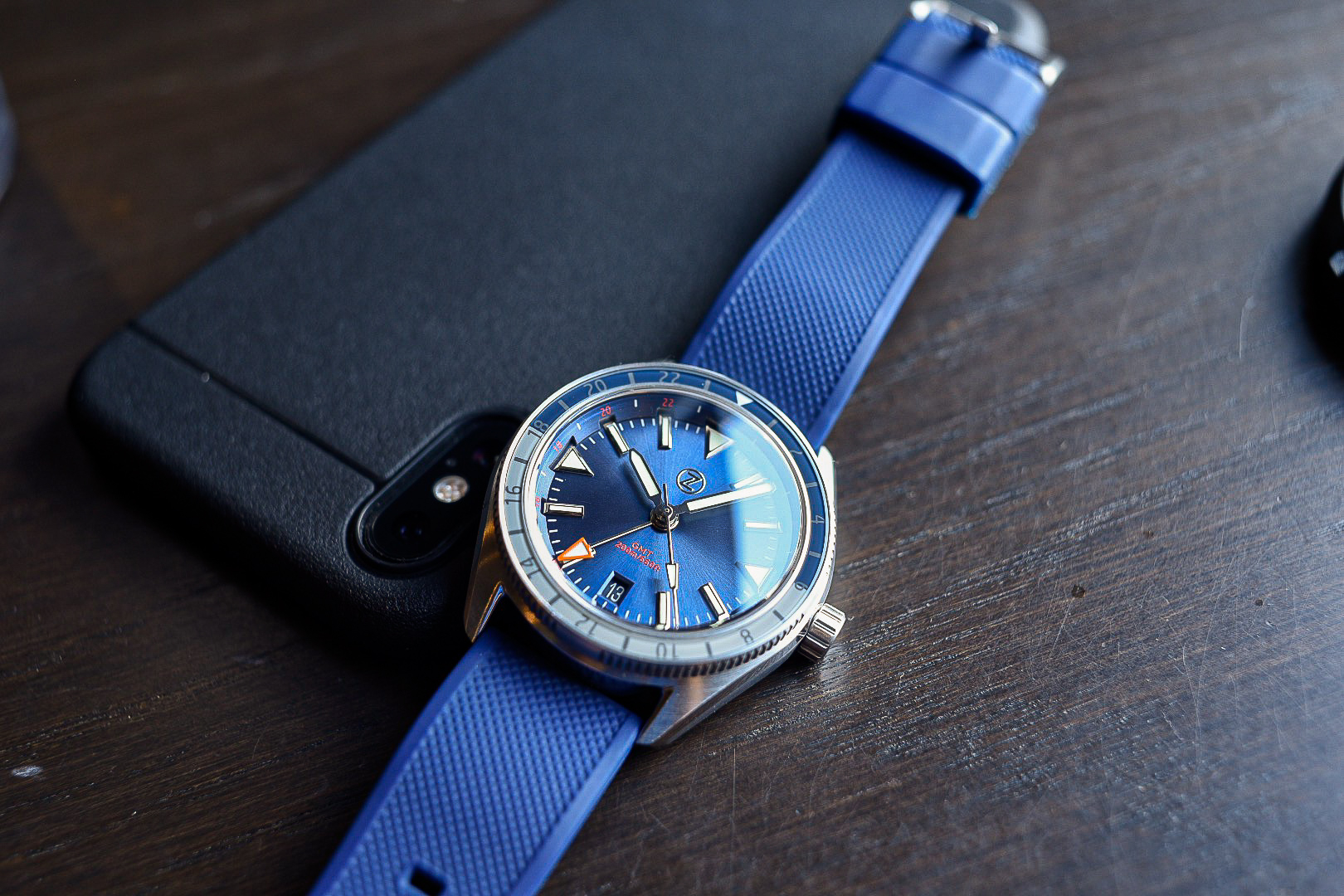