Combining two of the most popular types of watches
byWill

As its name implies, the Dryden Chrono Diver combines those two popular elements into one watch, a mecha-quartz chronograph with a dive bezel. This combination allows the wearer to time multiple things at the same time. It adds a Swiss army knife effect to the watch and makes it a capable tool watch. 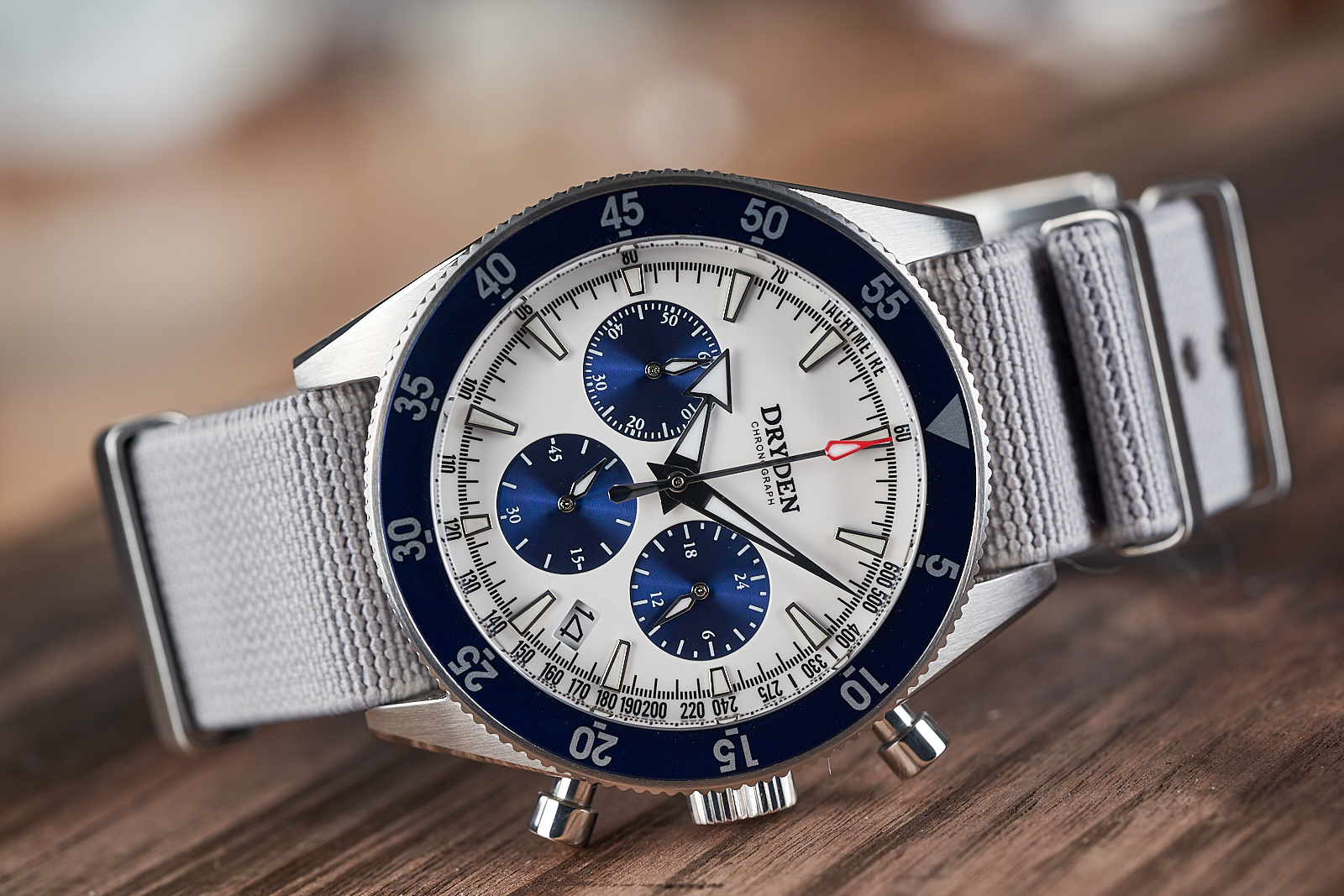 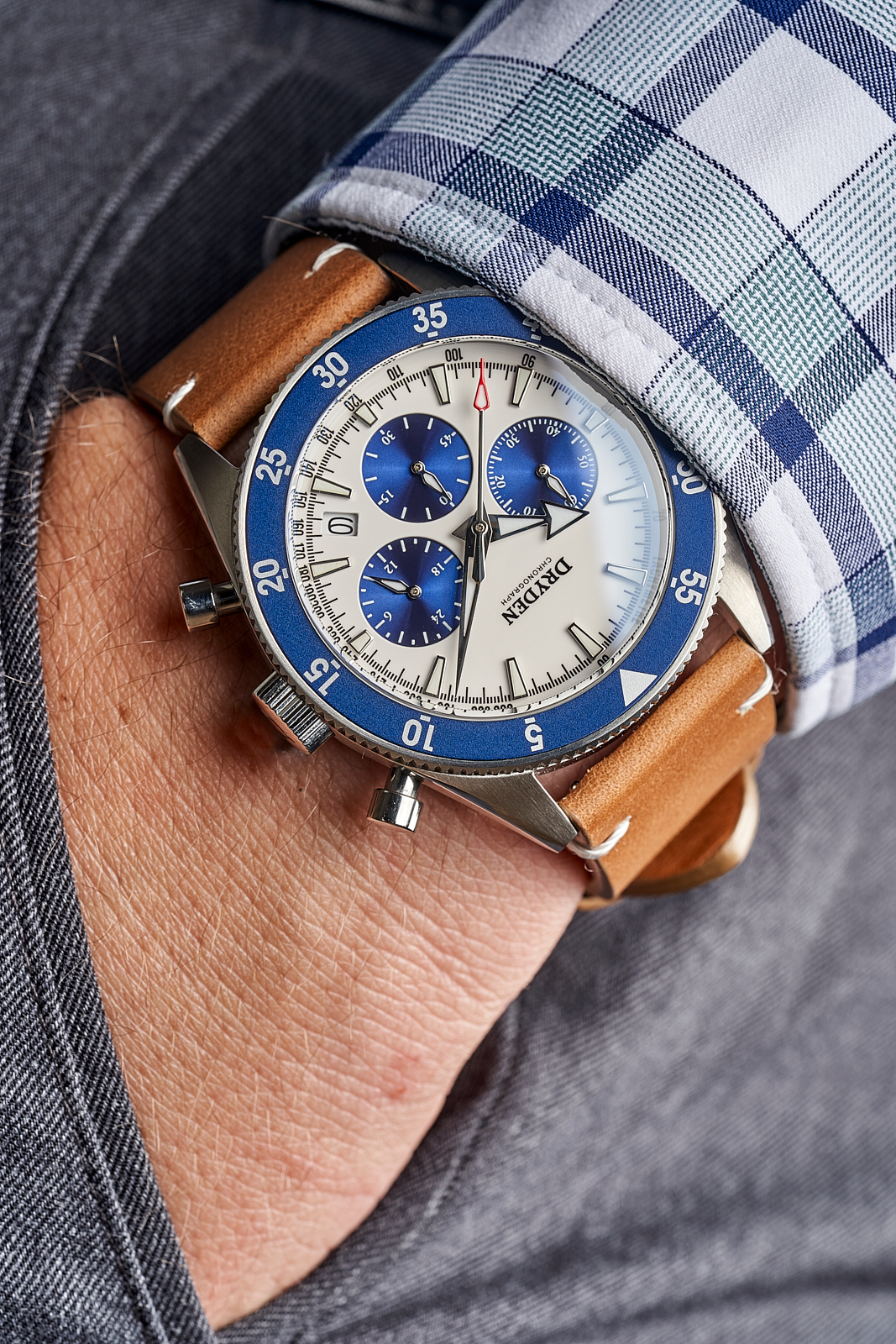 However, it is not huge. Coming in at 42mm, the Chrono Diver is going to command enough wrist presence to let you know it’s there without feeling like a clock on the wrist, as a proper tool watch should.

The lugs slope down gently allowing the watch to hug both small and large wrists alike. Some larger watches with lugs that slope too dramatically can dig into bigger wrists while crushing the bones of smaller wrists. Dryden has made the Chrono Diver proportional in the right places to achieve this balancing act. 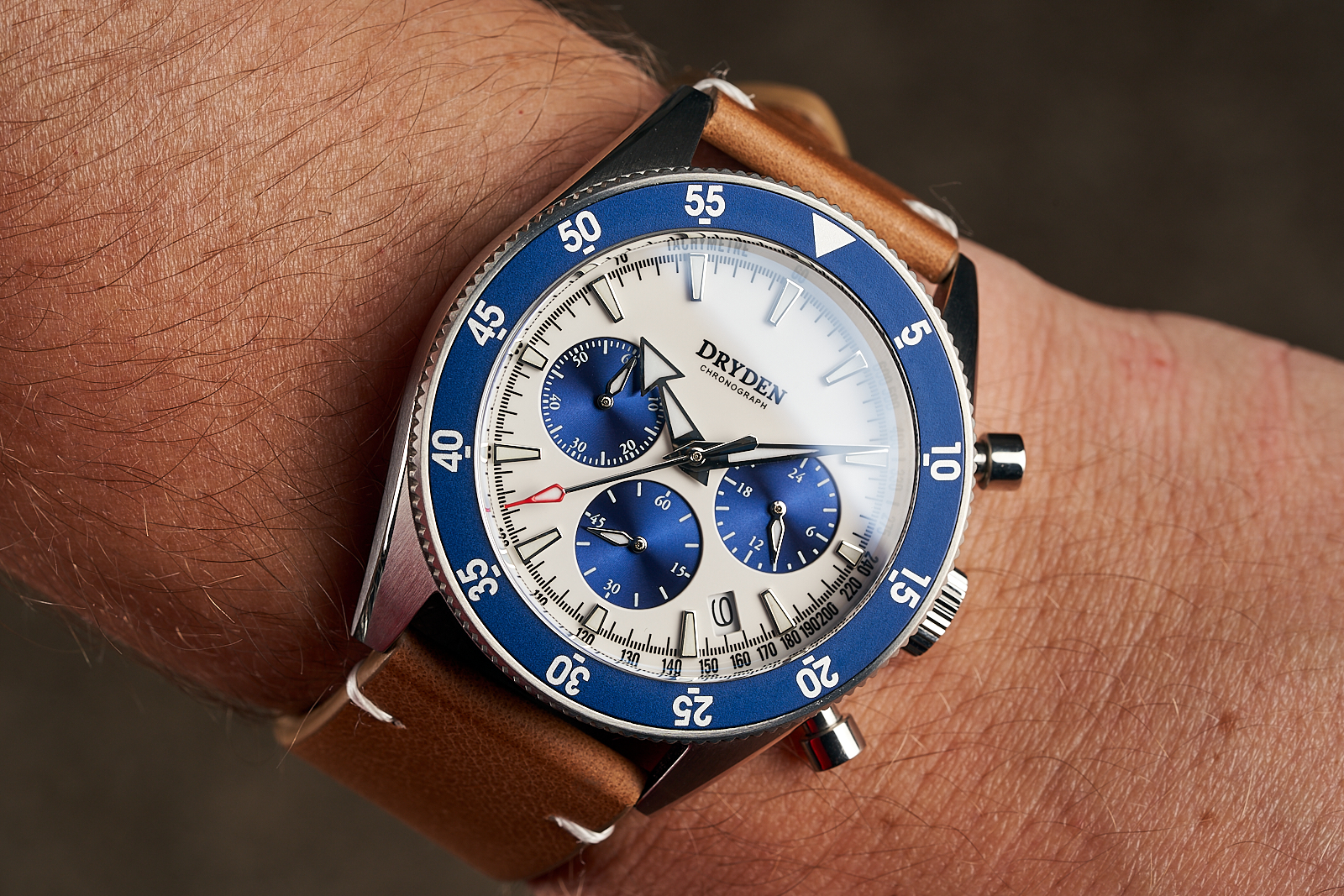 Thanks to the Seiko VK63, a movement I have covered in previous reviews, the Chrono Diver is not overly thick. Correctly balanced with the rest of the dimensions of the watch at 13.5mm thick, it doesn’t stand tall on the wearer’s wrist and can slide neatly under a shirt cuff. A millimeter or two of this thickness is the crystal, aiding in the slimmer look on the wrist.

Panda dials are becoming more common on chronographs and finding a way to separate them from the pack can be a chore. Dryden has managed to do that with a beautifully executed blue panda dial. 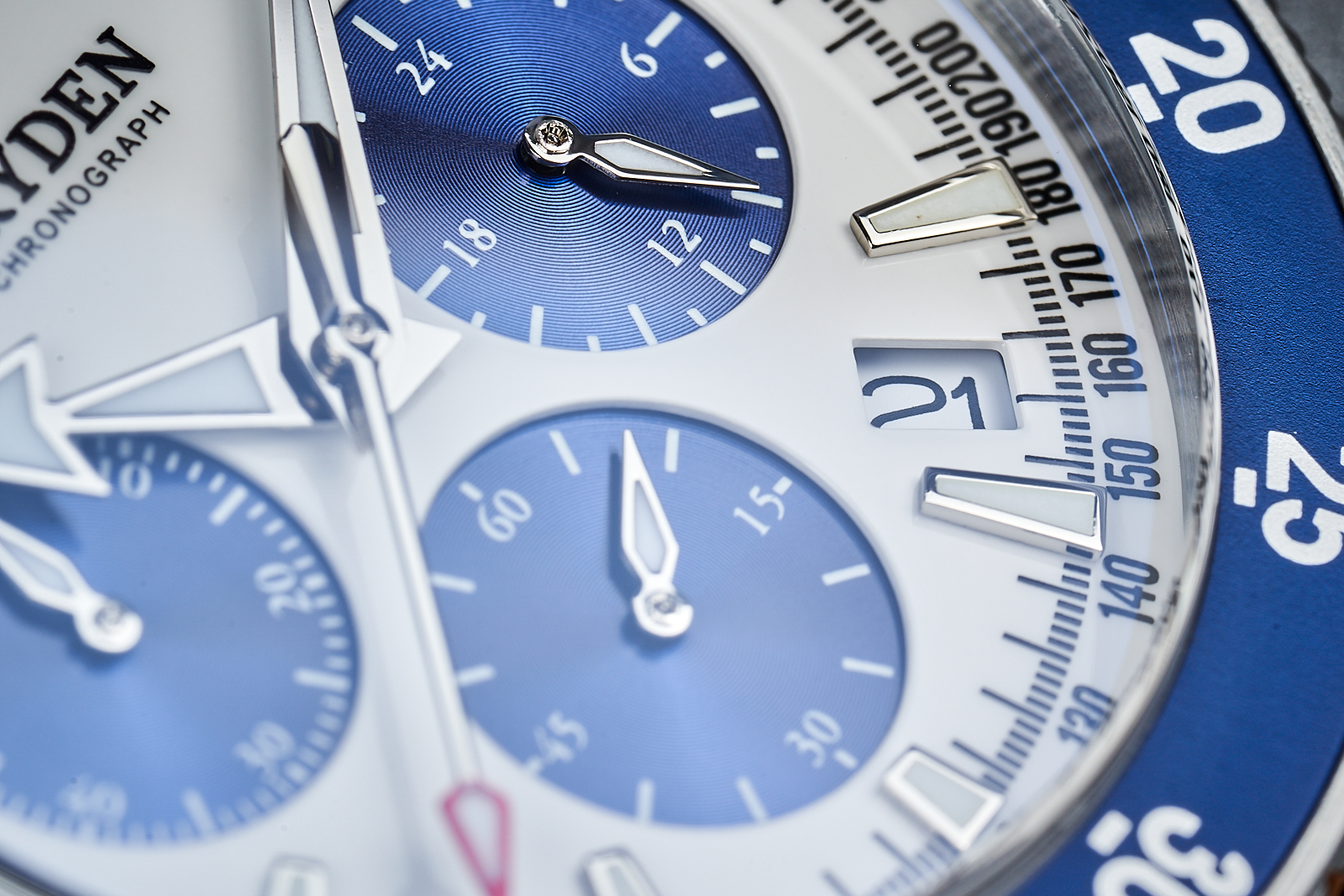 The main part of the dial is glossy white with minimal text (excluding the tachymeter scale) outside of Dryden and Chronograph at the 12 o’clock position. Applied markers filled with lume are at all the hour positions. Each marker tapers in toward the dial with the 3, 6, and 9 o’clock markers truncated to make room for the subdials.

Each subdial is filled with a sunburst blue texture that is truly the highlight of the watch. The subdials can appear a deep, royal blue and then pop to life when hit by direct sunlight. Combined with the glossy white, the entire dial begs for your attention and will often get it. Each hand of the subdials is filled with lume, making it possible to read them in the dark. 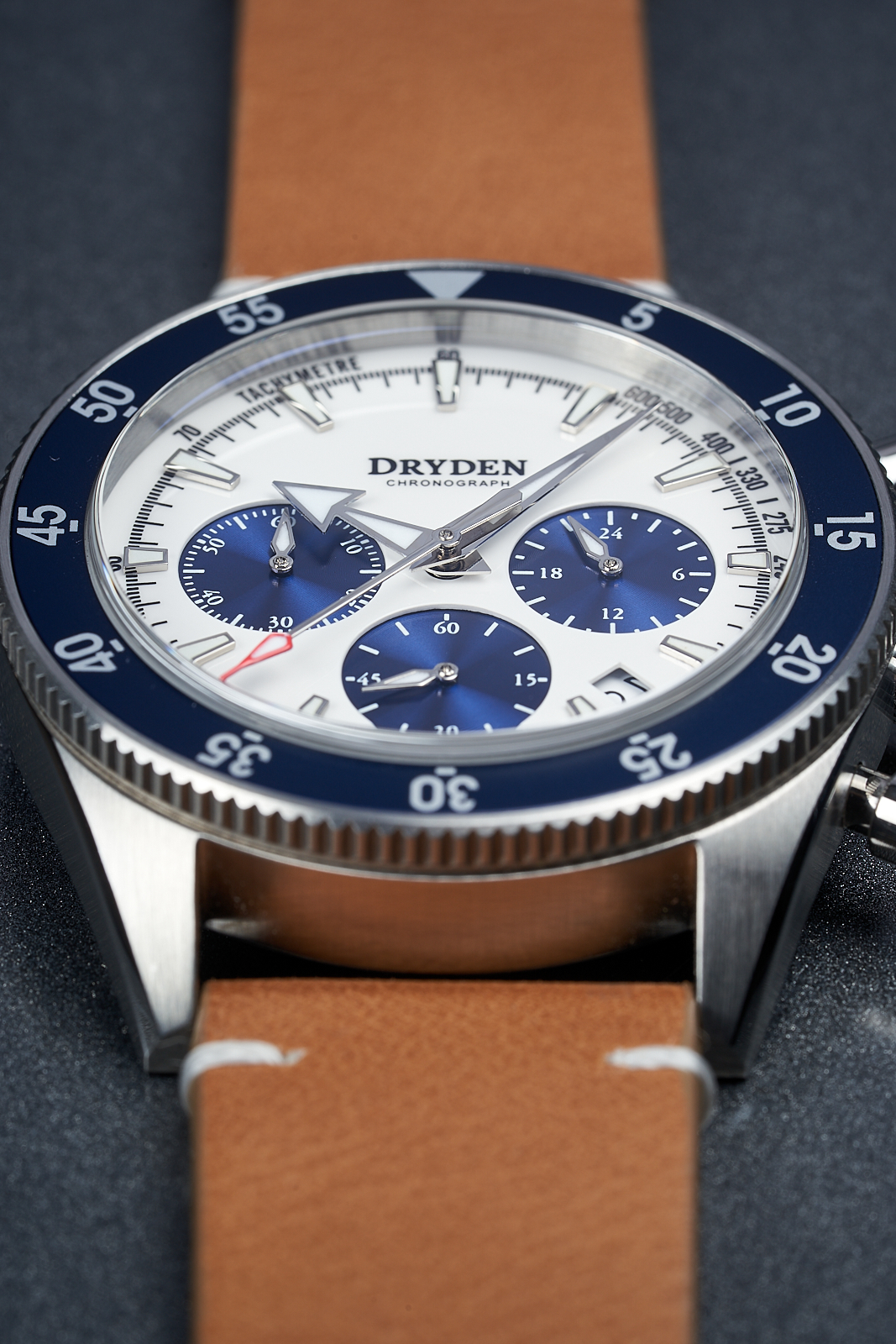 The internal tachymeter scale is well executed except for one area. The graduations for the 190 and 200 text are way too close together and give the impression is says 190200. 190 should have been dropped from the dial to maintain the balance of the spacing between numbers.

I’m not often a fan of 4:30 date windows as they are often an afterthought and not well implemented. With that said, the 4:30 date window on the Chrono Diver is one of the first ones I don’t mind. With its white background and black text, it fades into the dial and doesn’t stand out until you need it. 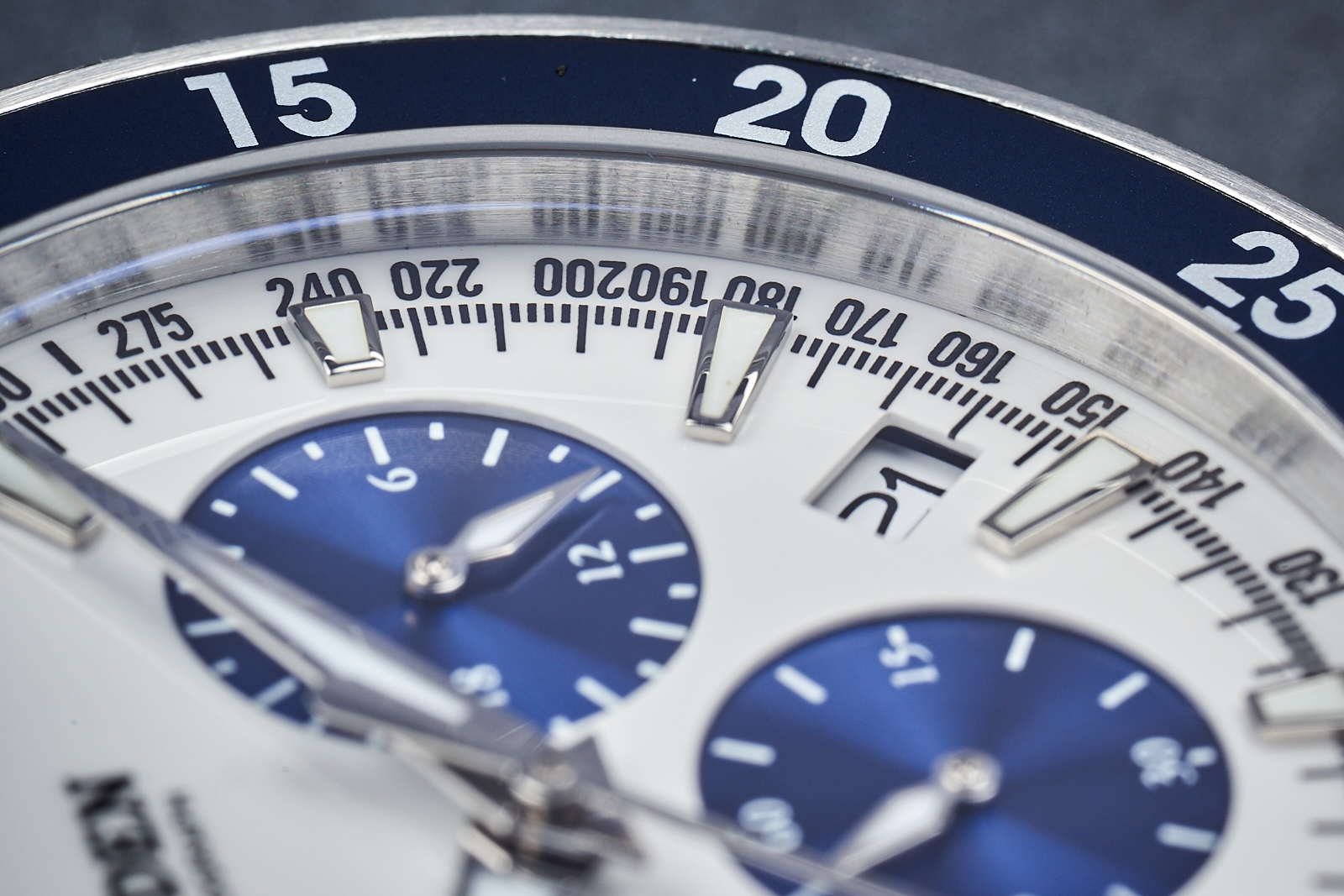 The hour and minute hands are reminiscent of the Broad Arrow Omega Speedmaster. The minute hand tapers to a sharp point as it meets the track of the tachymeter scale and the hour is…you guessed it, a broad arrow. The chronograph hand is tipped with a contrasting red arrow, making it highly visible against the white dial. 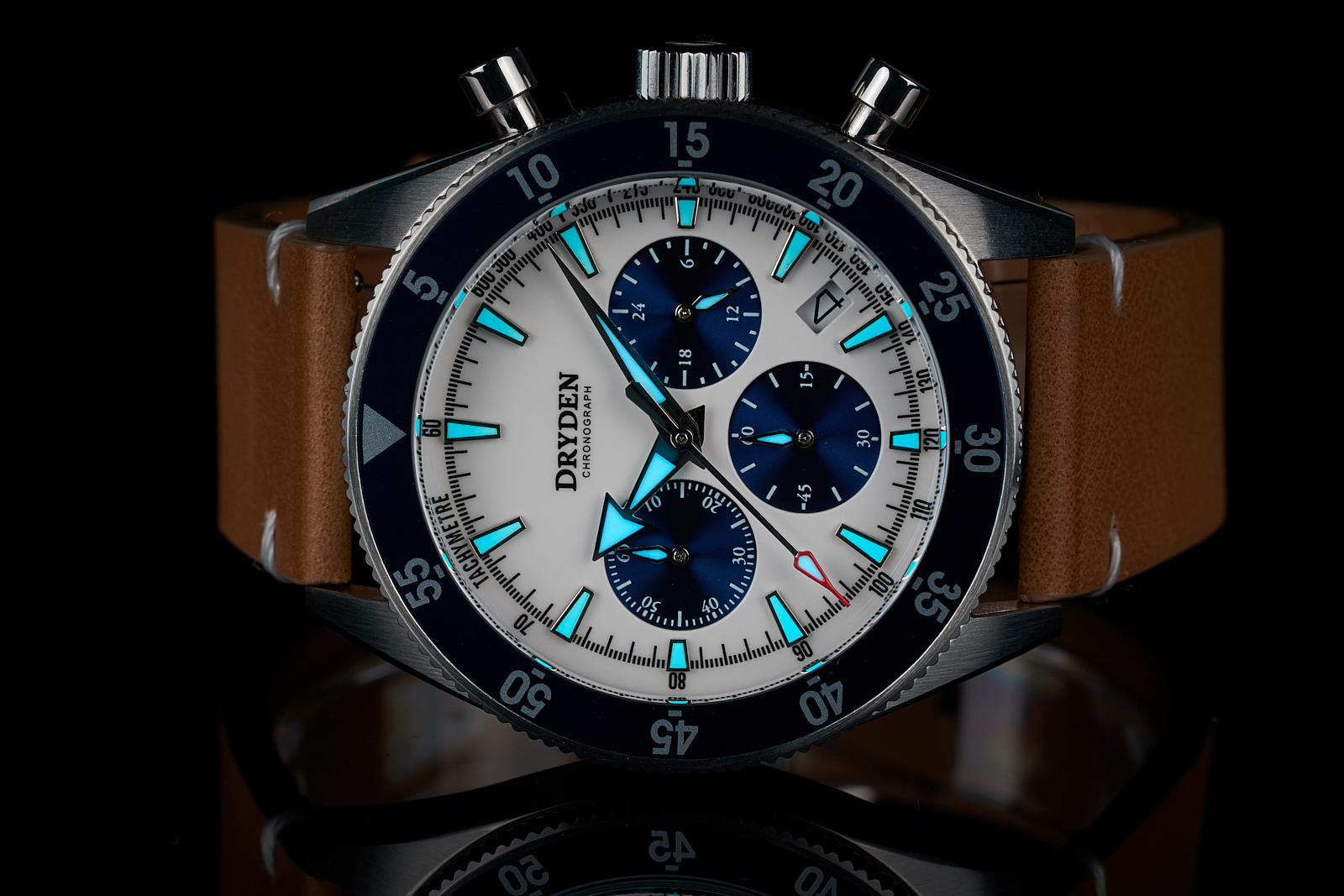 Even with the glossy dial and sunburst subdials, the Chrono Diver is easily legible underneath the double-domed sapphire crystal thanks to underside AR coating. 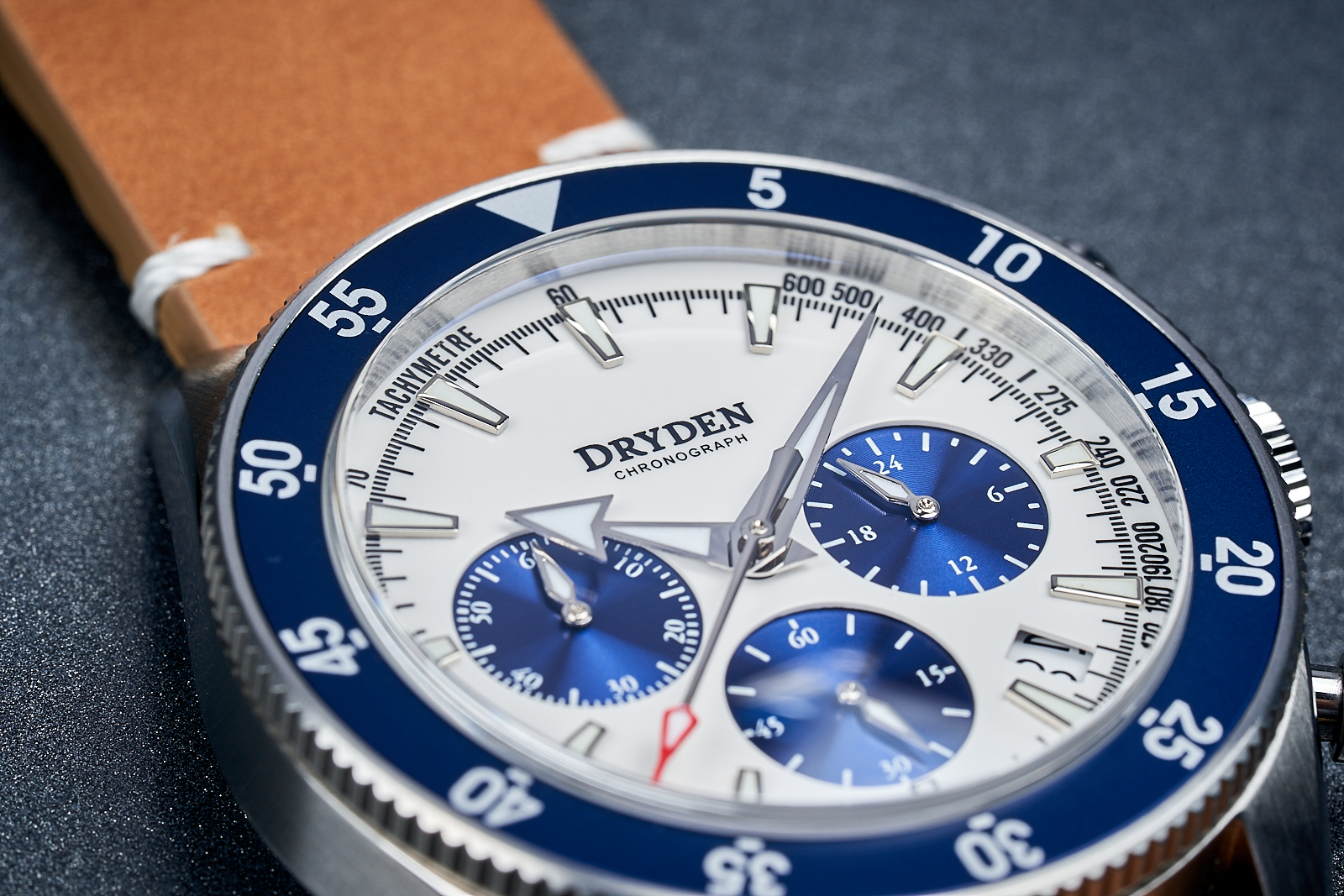 With mostly brushed surfaces, the case of the Chrono Diver maintains its tool watch roots. A polished bevel runs the length of the case and aside from the pushers, there is no other polishing on the case. It is all finished well with crisp lines and transitions. 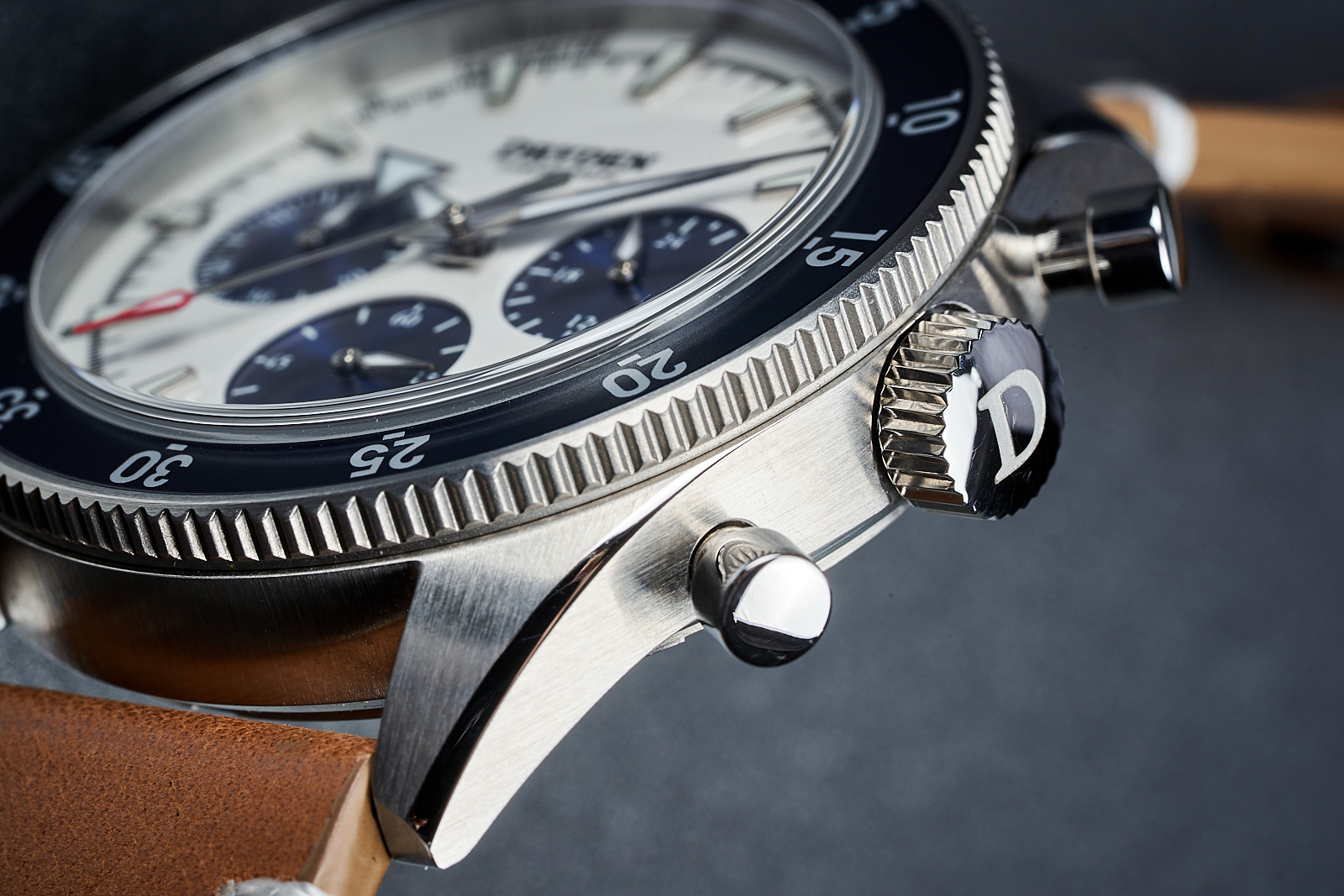 A signed crown with the Dryden D screws down into the case. Given that the name of the watch contains the word diver, it would be a glaring omission not to include a screwdown crown. It’s always nice to see a screwdown crown on quartz watches considering how little it will be unscrewed to set the time.

The action on the 120-click unidirectional bezel is well done and easy to turn. The feel of a watch can be quickly tarnished with a bezel you can’t turn easily and I’m happy to see it tensioned correctly on the Chrono Diver. The aluminum insert coordinates with the dial/subdial colors. I wouldn’t mind seeing Dryden release a version with a 12-hour bezel insert, considering their growing popularity. 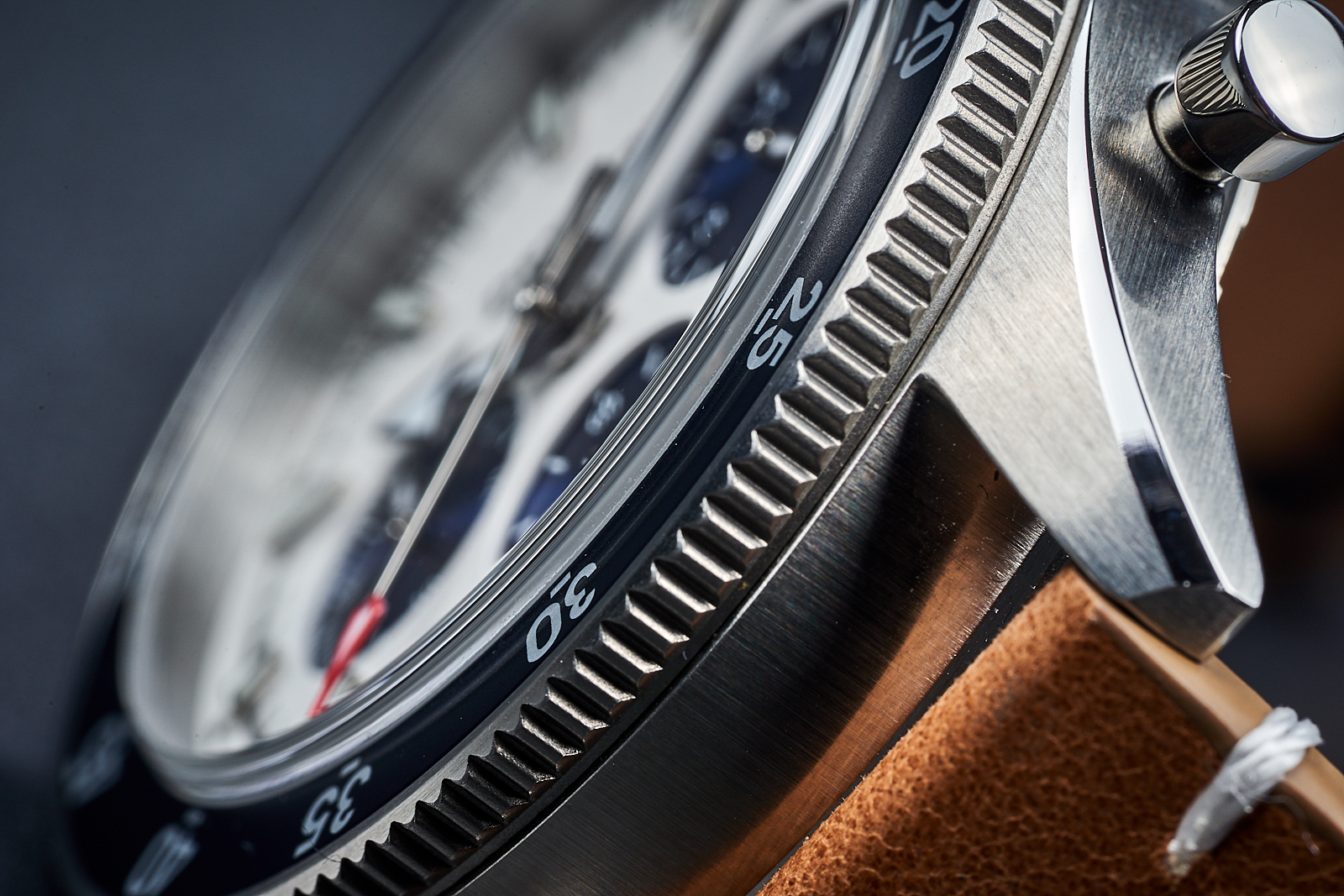 A screw-in caseback with a sailboat motif secures the VK63 movement inside the Chrono Diver.

Dryden included a selection of straps for this review, two leather straps and two NATO straps. The leather straps were comfortable and supple out of the box, something I am growing increasingly fond of as I often don’t have time to break in straps properly. The NATO straps were also comfortable with nice hardware. Depending on the colorway you order, you will receive one quick-release leather strap and either a seatbelt NATO or an elastic strap. 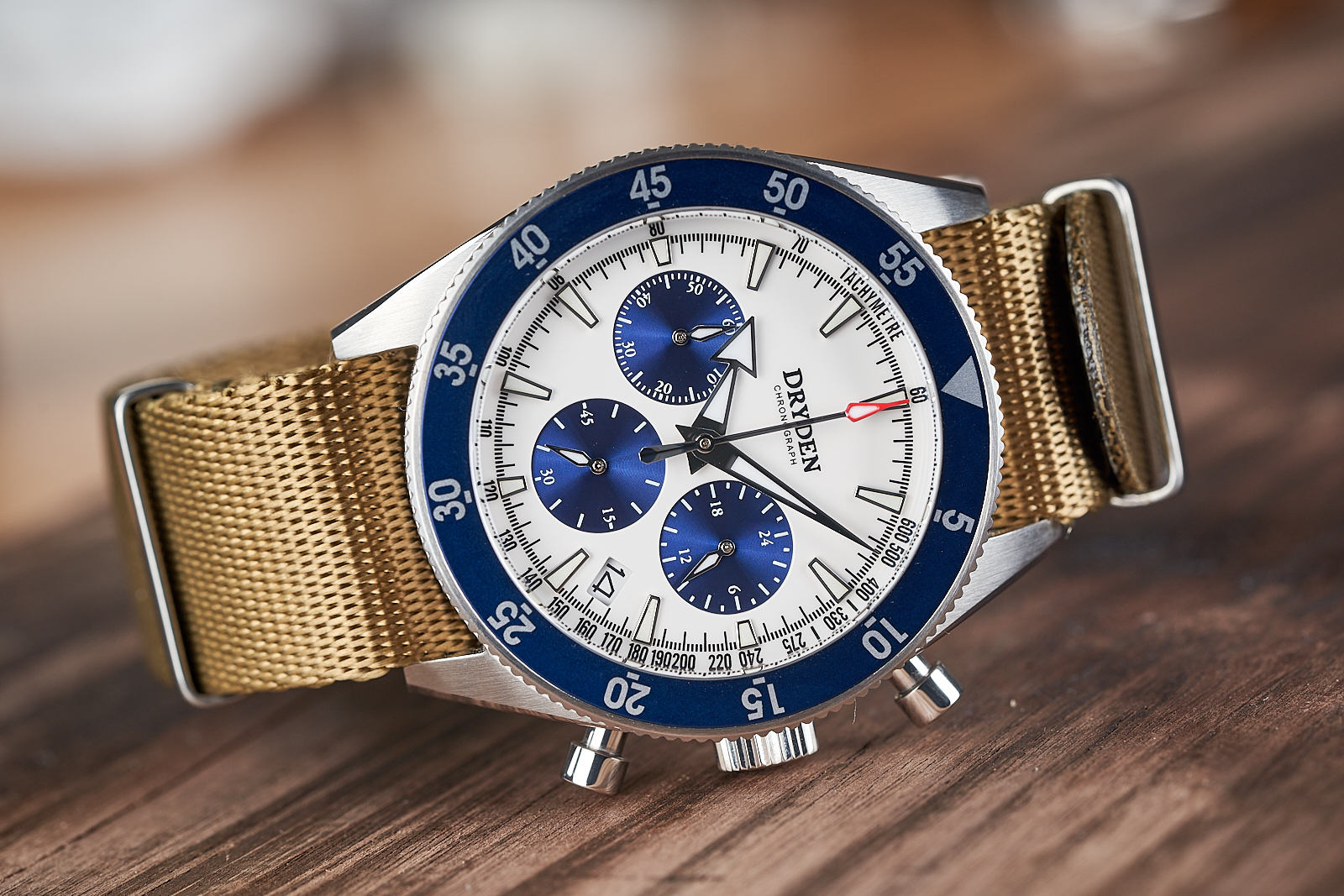 If you’re looking for a watch that is a true tool watch and can handle most anything you can throw at it, the Chrono Diver is worth a good look. Combining the dive bezel with a chronograph makes sure the watch can handle any additional timing functions you might need.

Dryden did a balancing act when putting together the dial of the watch. Because no bezel was available for the tachymeter scale, they did a nice job laying it out to flank the markers. The dial doesn’t feel cramped despite all of the information presented on it. 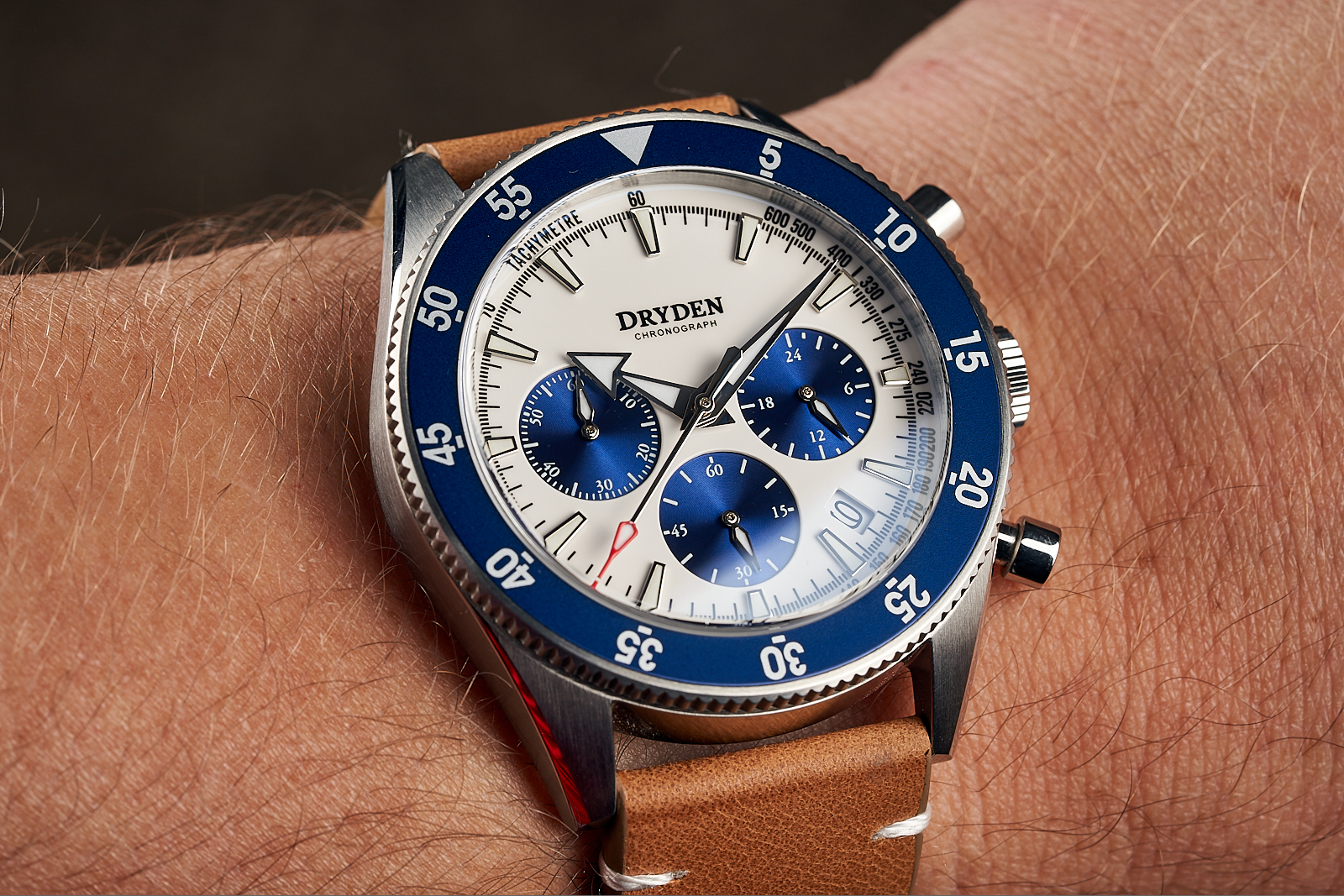 Quartz chronographs are all about value. You want to be able to get a watch that can perform some of the most popular functions without dropping the cash necessary for a full mechanical chronograph. The Dryden Chrono Diver is able to accomplish that value proposition with a well-executed package. Thanks to the addition of the dive bezel, it also manages to separate itself from the pack of quartz chronographs on the market today. 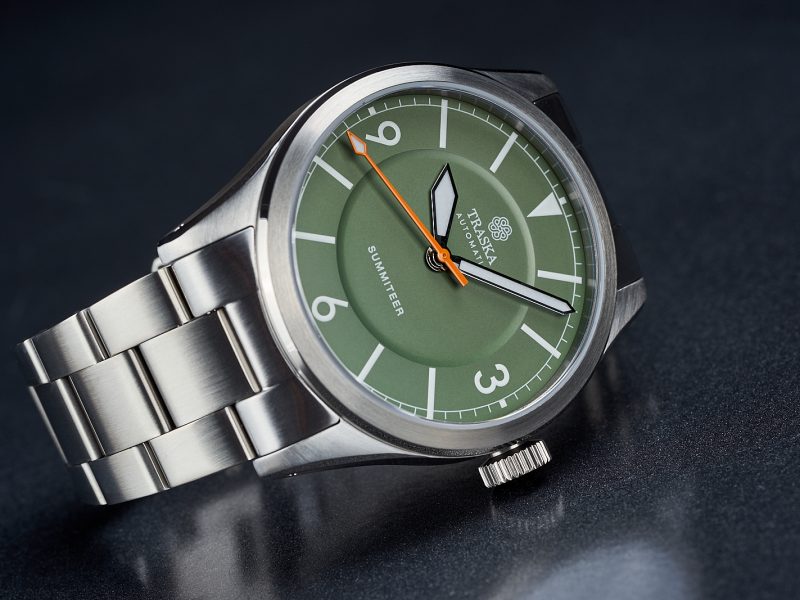 A no-nonsense field watch that is tough as nails 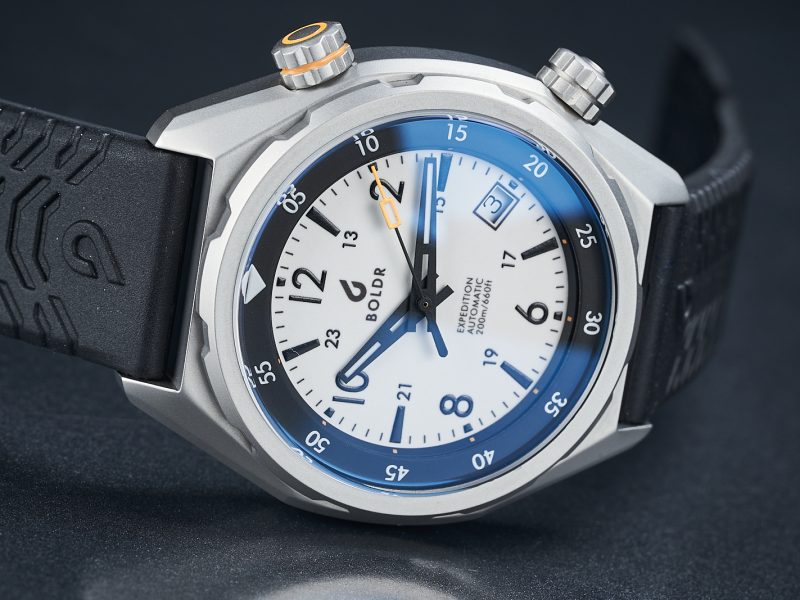 Designed to be your companion on all of your adventures 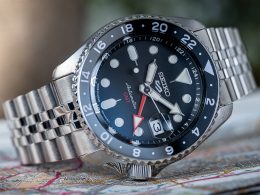 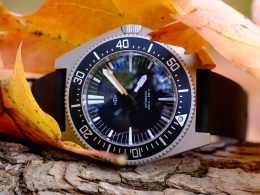 A modernized military-issue watch for everyone 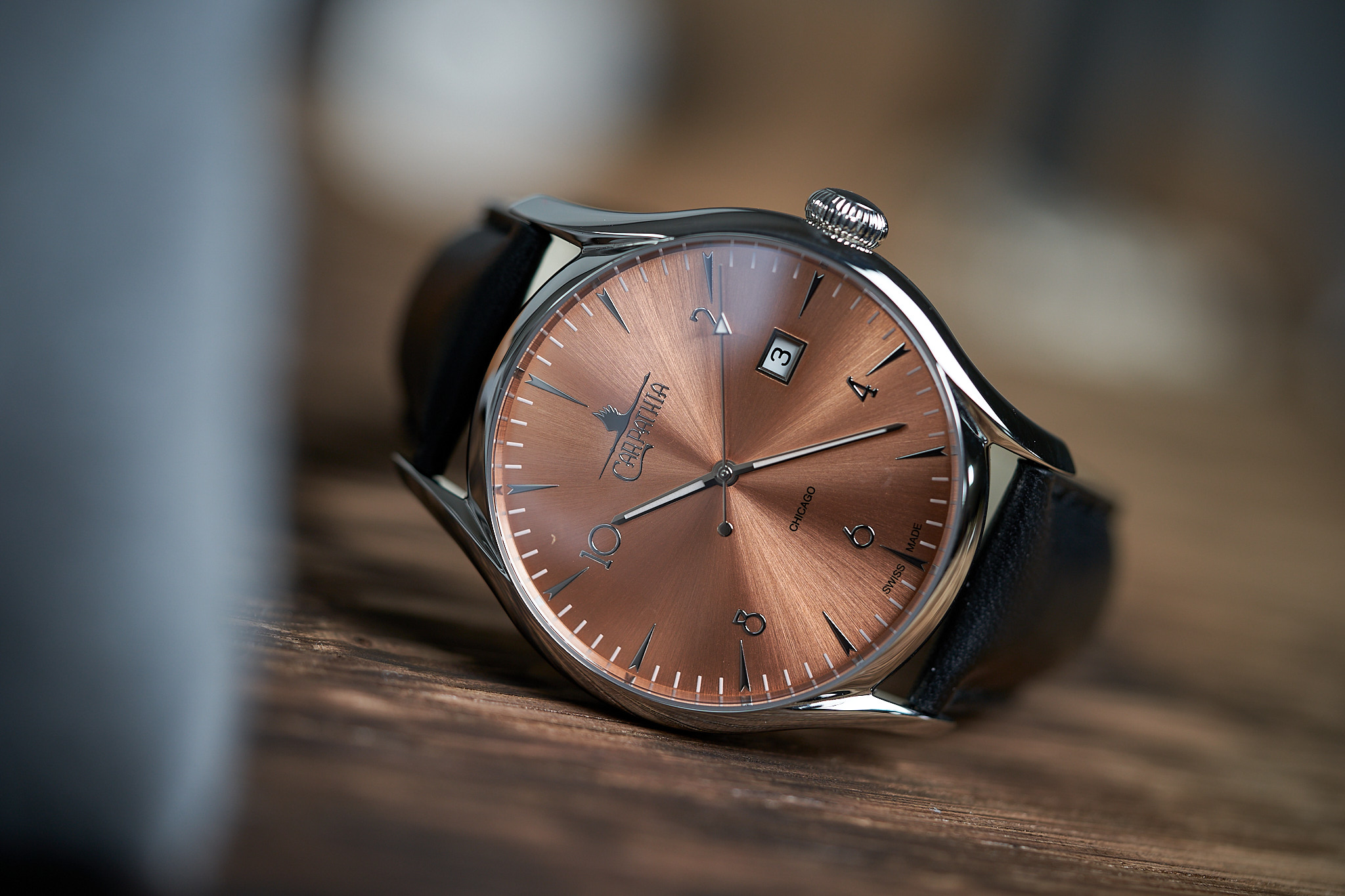