These were always the “beater” watches, a watch to be careless with. If it’s cheap and cheerful and, in the case of the G-Shock, built to withstand shock and a moderate degree of physical trauma, why not own one or two? Some people didn’t even count them in “the collection,” they were such beaters.

I appreciate the utility of an inexpensive watch to serve during potentially rough or damaging activities. I just never felt like it should be digital. Even a cheap watch is a luxury in our day of cell phones and clocks everywhere. In my mind, why shouldn’t this also be a classic good-looking analog watch? Digital seemed to surrender too much aesthetic pleasure for utility, an unprofitable trade when raw timekeeping utility surrounds us in myriad forms.

However, I’ve also found that it’s usually wise to put an asterisk after any strong watch opinion, as time has a way of modifying and moderating taste. For myself, I began warming oddly to the idea of a digital watch in the collection, but I still wasn’t sure I was quite ready to go full resin G-Shock.

Enter Armitron, a brand I knew nothing about previously, with one of their most well-received releases this year, the Griffy. After learning about the watch on a forum and that it was currently on sale, I decided to take the plunge and order my first digital watch. For me there were two main attractions to the Griffy.

First was the case. It’s made entirely of 316 stainless steel. This is less common than I think it should be amongst digital watches—most companies rely on plated resin to achieve the polished steel look. As with any plated watch, scratches and wear tend to reveal its true, uglier nature rather than give the watch a comfortable, well-worn look. In creating the Griffy entirely from steel, Armitron gave the watch a much more long-lasting well-built feel. This general aversion to plating also meant I got the plain stainless steel Griffy, instead of the gold PVD version.

The second attraction was the use of an LED digital display. The LED is the old money of digital technology—dignified, well-regarded in its day, and mostly obsolete in modern watch society.

A Brief History of LED Watches

In 1972 Hamilton Watch Company released a truly revolutionary watch in an industry about to be stormed by technological marvels: The Pulsar LED digital watch. Instead of a dial it had a small ruby screen, and a button on the side that lit up tiny LEDs inside, displaying the time in digital format. Because LEDs drew a large amount of power for the batteries available in the 70’s, the screen was designed to be off by default.

Although predictions that analog watches would be completely obsolete by the end of the century turned out to be untrue, the Pulsar and its many competitors that followed were an enormous hit. They were marketed as the most technologically advanced timekeeping instrument ever created, and as a high luxury item that only the most enthusiastic and well-heeled could enjoy.

The first Pulsar LED watches were cased in solid 18k gold and cost $2,100- over $13,000 in 2020 dollars. The first run sold out within days. Many famous people acquired and wore them- President Gerald Ford, several United States senators, the Shah of Iran, and many music and television personalities were all avid owners.

For much of the 1970’s, LED technology reigned undisputed in digital watches. After a couple years of Pulsar supremacy, other electronics companies jumped on the bandwagon and started producing their own LED watches, driving prices down; ironically this eventually led to its demise.

In 1976 Texas Instruments produced an LED watch for $20; in 1977 they sold one for $10. The market for high end digital collapsed entirely. Within a few years, LED technology was abandoned for technologically superior LCDs, and digital watches became the cheap, mostly unremarkable items that many today continue to be, constructed for next to nothing and sold for not much more.

The history of the Armitron company is part of the story of the LED watch. The company’s founder, Eugen Gluck, was born in 1927 in Romania, and was the only one of his family to survive interment in Auschwitz during WWII. Penniless after the war, he followed the footsteps of many Jewish survivors and came to America. He was an ambitious man and successfully pursued many business endeavors, one of which was affordable watches. In 1956 he started producing and selling watches under the E. Gluck brand, until the Armitron brand was established some time afterward. Armitron was among the first to produce LED watches in the 1970’s and they produced good quality, middle-tier pieces for the American market.

In 1977 they abandoned the technology with many other manufacturers and switched to manufacturing LCD watches. Armitron and E. Gluck Corporation continued to grow throughout the following decades, until they became one of the largest watch brands based in the US. They continue to be to this day, with Armitron producing watches under its own name, and E. Gluck owning many fashion brand names such as Anne Klein, Nine West, and others.

Armitron’s offerings today tend to be quartz and priced very inexpensively. I have not handled or seen any beyond my Griffy, so I’m unable to comment on the quality or value proposition of their other offerings.

The Griffy I bought arrived in decent time, in a simple metal tin for a box and a small card instructing how to use the features. The watch has two buttons on the side. Like all other LED watches, the normal state of the watch is “sleep”, as an LED requires constant battery power to remain on, unlike an LCD. The button at 3:00 activates the screen and displays the time in either 12 or 24 hours. Press the button again, and it shows the date. A third press shows the running seconds. The button at 4:00 is strictly for setting the watch.

The LED screen is bright and crisp enough for legibility; the edges and ends of each numeral tend to be a little fuzzy, giving it a warm, retro-tech appearance.

The case is really beautifully designed. A square-ish tonneau shape very much in line with that of most LED watches from the 70’s, it measures 35mm across the sides and 39.5mm from hooded lug to hooded lug. 10mm of thickness gives it a nice bit of wrist presence and shows off the case shape and beveling better than an ultrathin LCD. Most of the case is brushed with a very fine, even grain, but the bevels on the sides are highly polished, a very nice touch in an inexpensive digital watch. The watch has a decent 50m of water resistance as well.

The lug width of the watch is 16mm, but the bracelet flares back out to 20mm after exiting the hooded lugs. The bracelet is remarkably good. The links are folded, but folded completely flat, so that in practice they look and act like solid links. The bracelet is thus extremely thin, at less than 2mm in thickness throughout is very comfortable, and is easy to size to a perfect fit that is often hard to achieve with regular bracelets thanks to the floating clasp. The clasp is stamped and doesn’t look the most robust, but fastens securely and has yet to fail.

Wearing this watch for me has been a constant pleasure. In normal, screen-off mode it looks very svelte, almost dressy, and undeniably old-school. It doesn’t advertise anything about itself or the actual time, but just waits to be called into service, and something about that feels oddly refined and elegant to me. The functionality calls to mind graceful old pocket watches that had to be brought out or opened up to tell the time. Indeed, this is the idea behind many highly refined dress watches- you wear them when you don’t really care about the time, or don’t want reminders of the time in plain view. The famous Movado museum watch is such a piece- purposely minimal and unobtrusive while also being attractive and sophisticated. This was not an opinion I thought I’d have of a digital watch, and it’s fascinating!

I’m also a chronic fidgeter, and I especially like watches that give you something tactile to do with your fingers while wearing— pushers, bezels, crowns, etc. I like the experience of having to push a button to see the time, and scroll through the other features. The LED screen has a retro high-tech appeal that’s hard to get with LCD watches, and feels a little extra special because of that.

As far as negatives about this watch, it’s hard to come up with many for one at its price point. I would love a thin, solid link bracelet- similar to what this one comes with- but with a regular bracelet clasp. A sapphire crystal in front of the LED screen would be fantastic. This upgraded Griffy would doubtless have a higher price tag but would be a pretty serious watch.

In summary I highly encourage anyone to give the Armitron Griffy a try- at $55 new, it’s one of the lowest-risk tries in the hobby. It’s definitely not your average digital watch, and is special in a number of ways. If it could make a convert of me (other digital watches have suddenly appeared in my eBay and classified searches), it’s probably worth the experience!

Check out more articles by Evan at The Watch Clicker 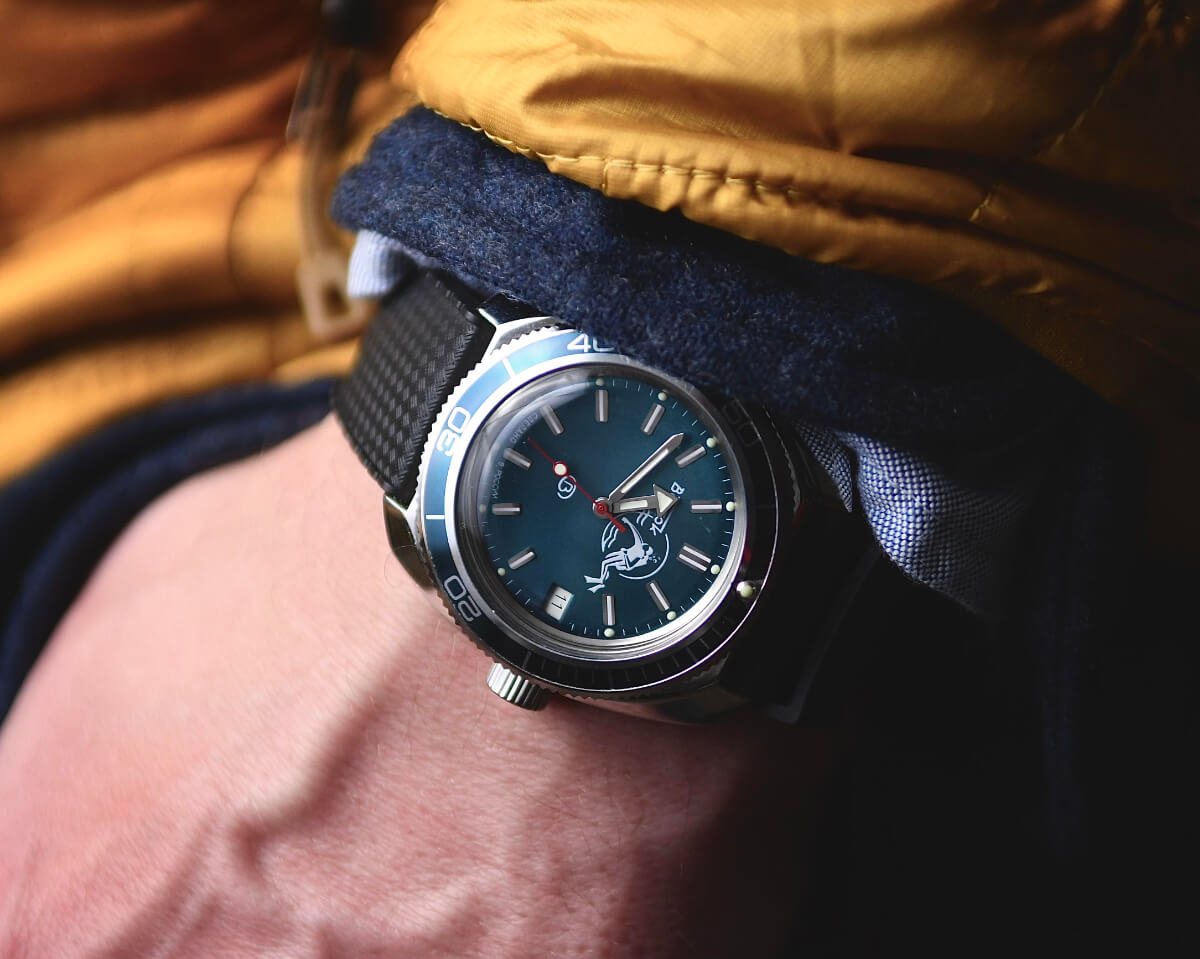 Andrew and Everett dive deep into the classic Vostok Amphibia 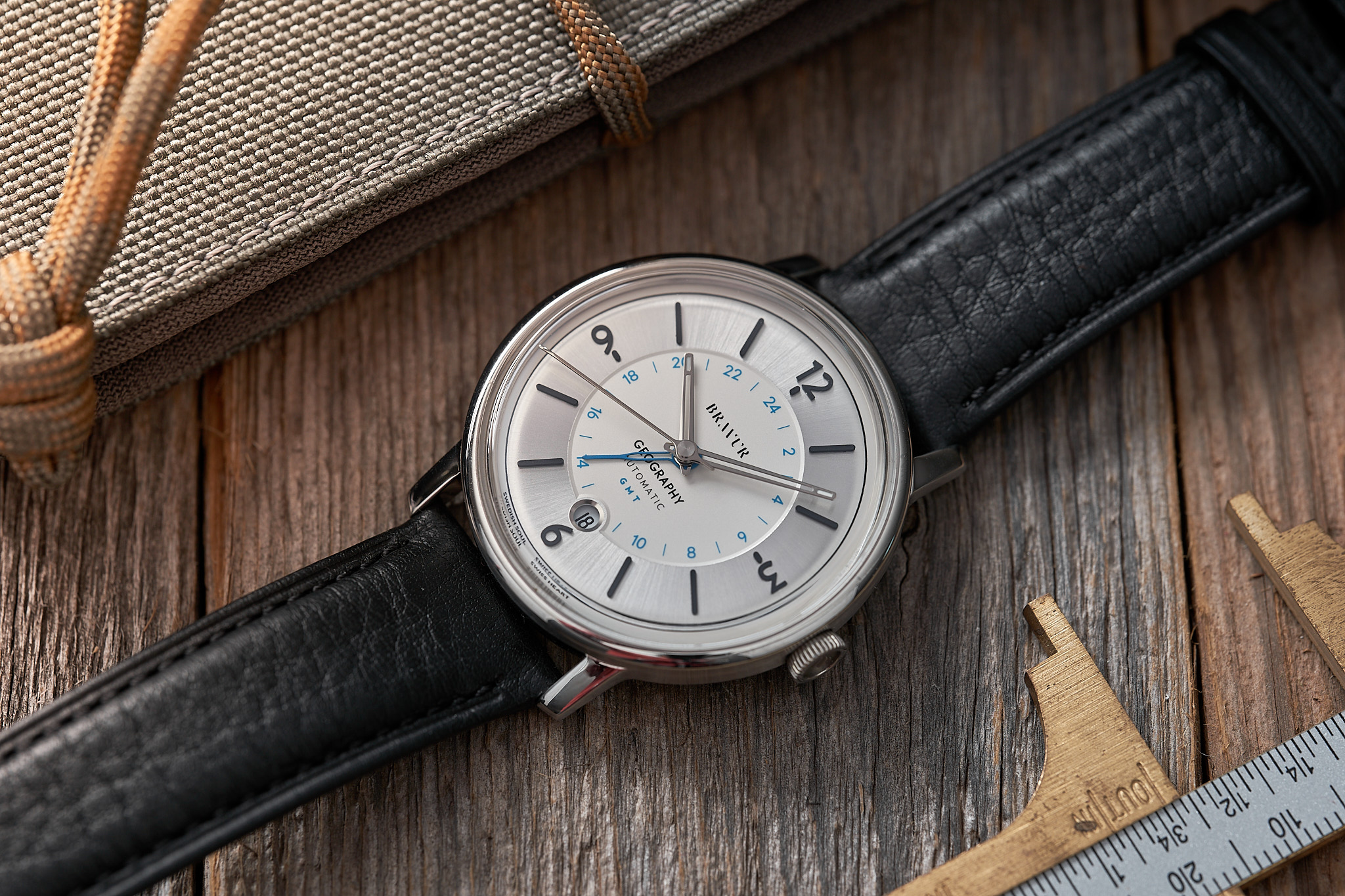 A GMT that remains subtle yet stands out from the crowd 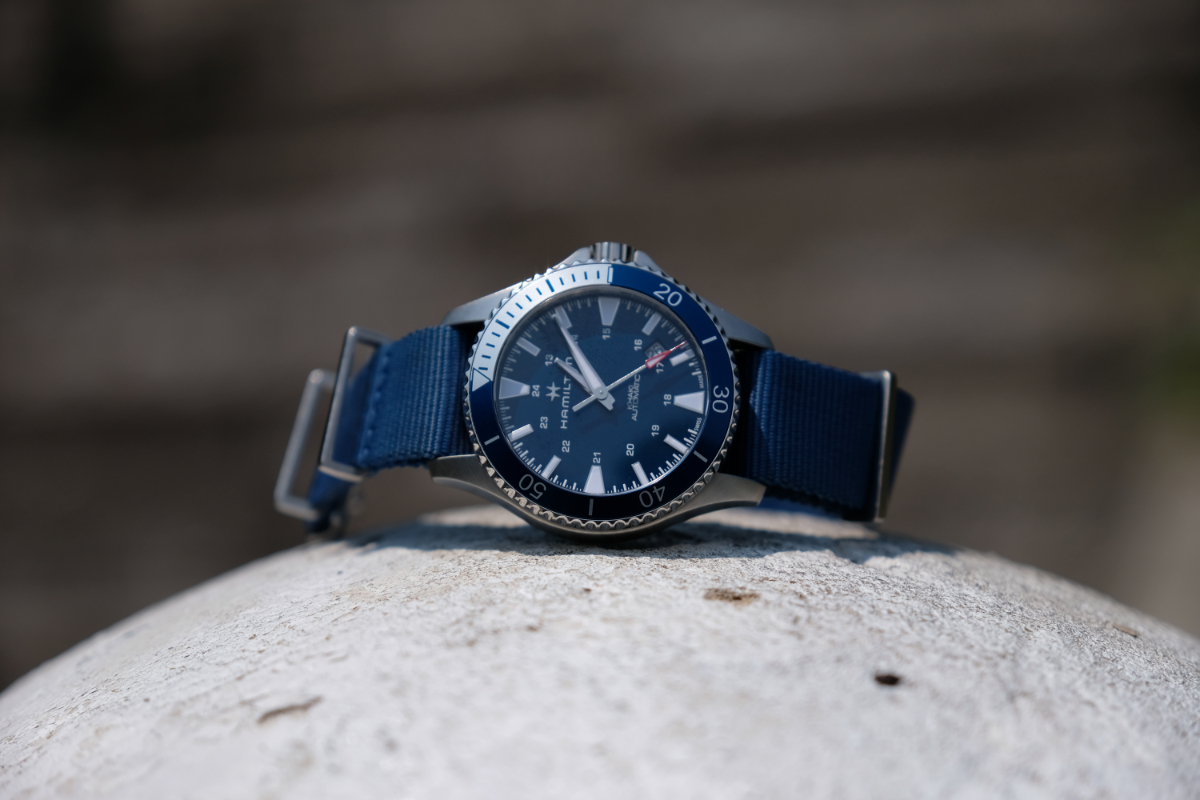 Vero drops their first ever chronograph