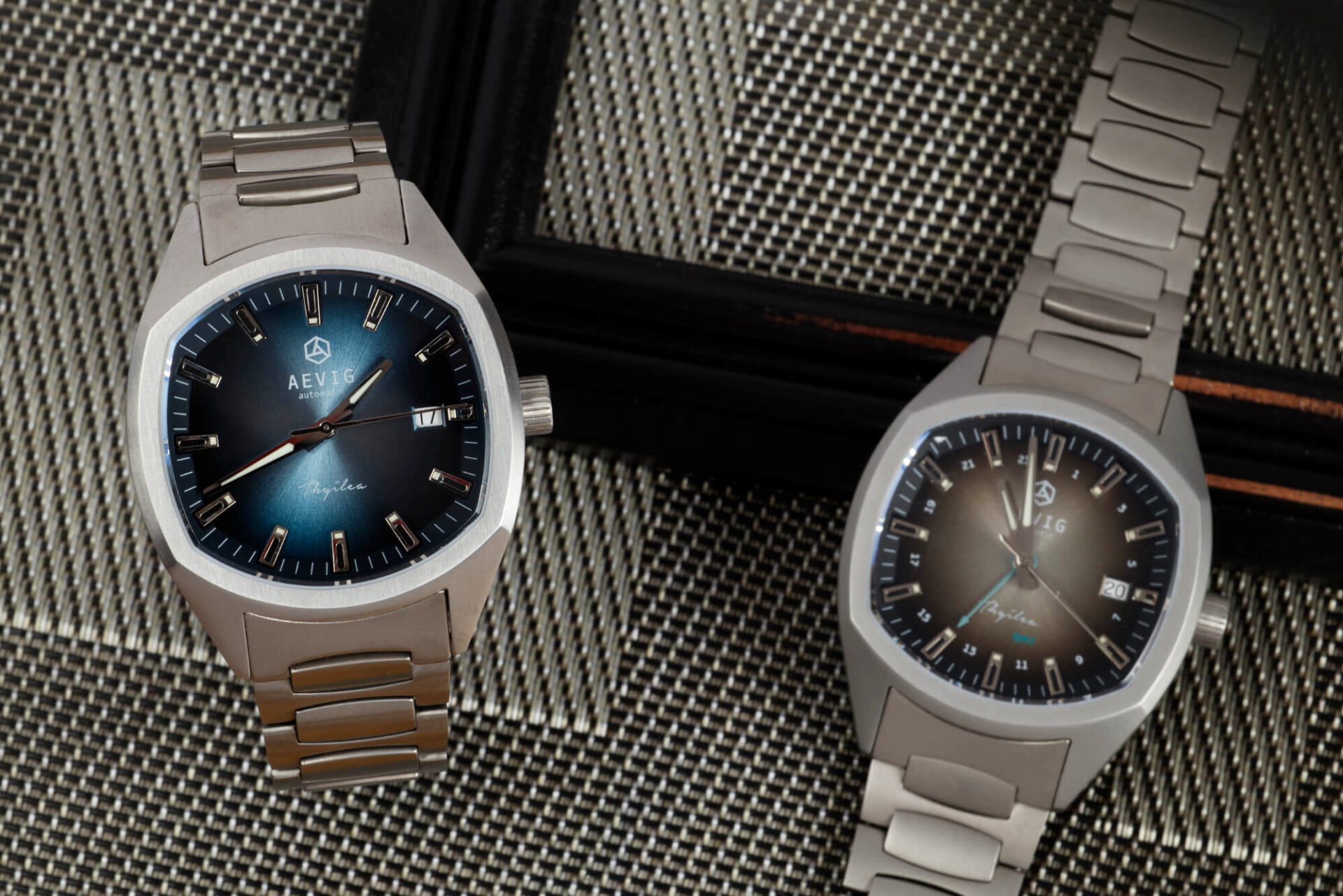 While Aevig is new to the pages of The Watch Clicker, it is by no means new. The brand has almost hit for the cycle at this point: it’s got a dress watch, a diver, a vintage-inspired sportswatch, a field watch, and a dual-crown travel watch. All it seems to be missing is a chronograph. And While I’m sure it will be released someday, that’s not what brings me to the keyboard today.

The brand’s newest model, the Aevig Thule, comes in two versions: three-hander and GMT. Both options are offered with a blue or brown dial, and the buyer has the option of satin brushing or bead blasting finishes. It’s a decent amount of choice without being overwhelming; too often these days brands give you the option of five or more dials and multiple finishes. To me, this has always suggested that a brand is not confident enough in its design. Aevig, though, has been at this game for a while, so it’s no surprise that it has the sureness to keep it simple.

The Aevig Thule features a retro TV dial seen in various watches in the 1970s. It’s immediately a fun vibe, which is tempered by its rather austere, angular case. The sunburst dial is easy to read and is kept simple to allow the texture to truly radiate. A flat sapphire crystal with underside AR keeps glare to a minimum. The Thule–both the three-hand sportswatch model and the GMT–could well be considered go anywhere, do anything watches for their pared down aesthetics and rugged specs.

A gentle curve keeps the watch hugging the wrist, taking over a millimeter of the specified height. The titanium absorbs and flattens light, giving the watch a warmth of shadows at different angles. The satin brushed finish plays differently, but not necessarily more, with the light. Both are great options, though the blasted offers a bit more resistance to nicks.

The Aevig Thule has standard 20mm lugs which means it can accept a wide variety of straps, and the ample lug box allows for NATOs, though I’d strongly recommend a single-pass rather than a traditional. In any case, I was quite tickled with the above strap combo.

This sunburst is just out of this world. It’s perfect. I’ve handled plenty of similar dials, but this exceeds almost all that have previously graced these tender, gentle fingers. And the TV dial design is a blast from the past that I am fully on board with. I used to covet the old Omega TV dial Speedmasters, until I realized they’re too thick for me. But I’ve always enjoyed the style. The date window, too, works for me. As a known date-window pedant, the beveled edge and positioning here are close to ideal.

Apart from the brilliant sunburst dial, the recessed markers are my favorite thing about this watch. It’s a subtle feature that you only notice when you give the watch a second look. With the cutouts for the markers, the chapter ring feels like it’s giving them a warm hug, accentuating its own depth and their height. The high polish of the hands and the markers catch the light nicely, and while the hands play black out of light, the contrast against the dial remains sufficient to tell time at a glance.

While the GMT is also offered in blue, the brown dial is my preference (I do prefer the blue for the three-hander). The warmth of the brown with the pop of teal really does it for me (The blue GMT has yellow accents), and I think brown is an option we don’t see enough of these days. It’s hard to get right, and even here one must acknowledge it’s more of a metallic, radiant beige. Regardless of color naming, it’s quite surprising: If you asked me what I’d prefer between a sunburst blue and sunburst brown, I would’ve chosen the former without a second thought. Yet here we are.

The offset ‘GMT’ is a playful touch that juxtaposes the utilitarian case. As for the GMT hand, I think some may argue it should be bigger, as that’s what most people are used to–massive arrows not just showing the time in a distant place, but showing that the wearer needs to know the time in a distant place. Showing that the wearer is a traveler, a person who goes places. I’d offer that a watch suggests this romantic notion simply by having GMT function. I think the subtlety of the Thule’s GMT hand is perfect: the GMT is simply an added function, secondary to the main time display, and by no means a statement. The odd-numbered GMT hours are oriented differently on the top half and bottom half, which is certainly a quirk.

The lume on both watches is kept simple–hands and markers–and done well. You won’t be blinded by the lume application, but you’ll certainly be able to read the time in the dark after just a brief pop outside or flash with your UV torch. Heck, it’ll even catch sufficient charge after a few minutes around incandescent bulbs. (Note that the GMT hand lacks lume, another sign that it’s not the main attraction.)

So, the case is fine. It’s media-blasted and titanium so it’s rugged as hell. The crown could use to be sized up, though it’s just big enough to grip–but it gets stuck when screwed in, requiring more torque than I’d prefer to get open. The lines are well-defined, though appear softer due to the effect of the titanium and blasted finish. I’m puzzled as to why there aren’t drilled lugs here. The bracelet has quick-release bars, but this watch has plenty of room on the lugs for what you may argue is a belt-and-suspenders approach. Whether you think drilling the lugs would be superfluous or not, the added ease it would bring to swapping straps would be appreciated.

I mentioned the two finish options above, and here they are. The left is the blasted finish, the right the satin finish (the three-hand model is only available in the stain brushed finish). Both are titanium but give an entirely different look. The satin reminds me quite a bit of Sinn’s U series bracelets. Both cases I had were blasted, though, and it’s worth noting that the finishing on the blasted bracelet was slightly off from the cases, as the manufacturers are different (check out the 6th photo in this review, of the brown dial). I’m hopeful that the satin finishing will match its case.

It’s the bracelet with which I take the most issue–actually, it’s the end links. The clasp, above, is fine: it opens, closes, and locks with ease and stays shut when it’s on. Good, great, grand, wonderful. But the endlinks. Woof. First, the quick-release tabs are stiff. Not “Oh, that’s not ideal!” stiff. More like “What the…is there a special way to do these?” stiff. Perhaps worse than that are the visible gaps where the endlinks meet the case. Look below: See the spots where the light is peeking through? Small as they may be, they shouldn’t be there at all (I asked what changes were being made for production and this wasn’t mentioned). That’s why I dropped this one on the beautiful suede strap in the photo towards the top.

The entirety of the Aevig Thule’s retro TV dial and case is a smashing success, but the watch isn’t perfect. And that’s ok. Sometimes a stunning dial is enough to hook you, sometimes you need the full package of flawless glory. I don’t think there’s enough here to discourage someone from getting either iteration of the Aevig Thule–there’s more to like here than dislike–I’d just issue the caveat that you may want to wear it with straps. Fortunately, the watch lends itself to doing just that.

Check out more tool watch reviews at The Watch Clicker

More Images of the Aevig Thule 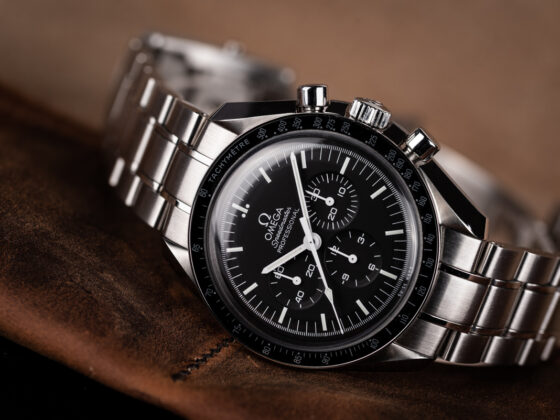 Podcast – Watches We Swiped Left On