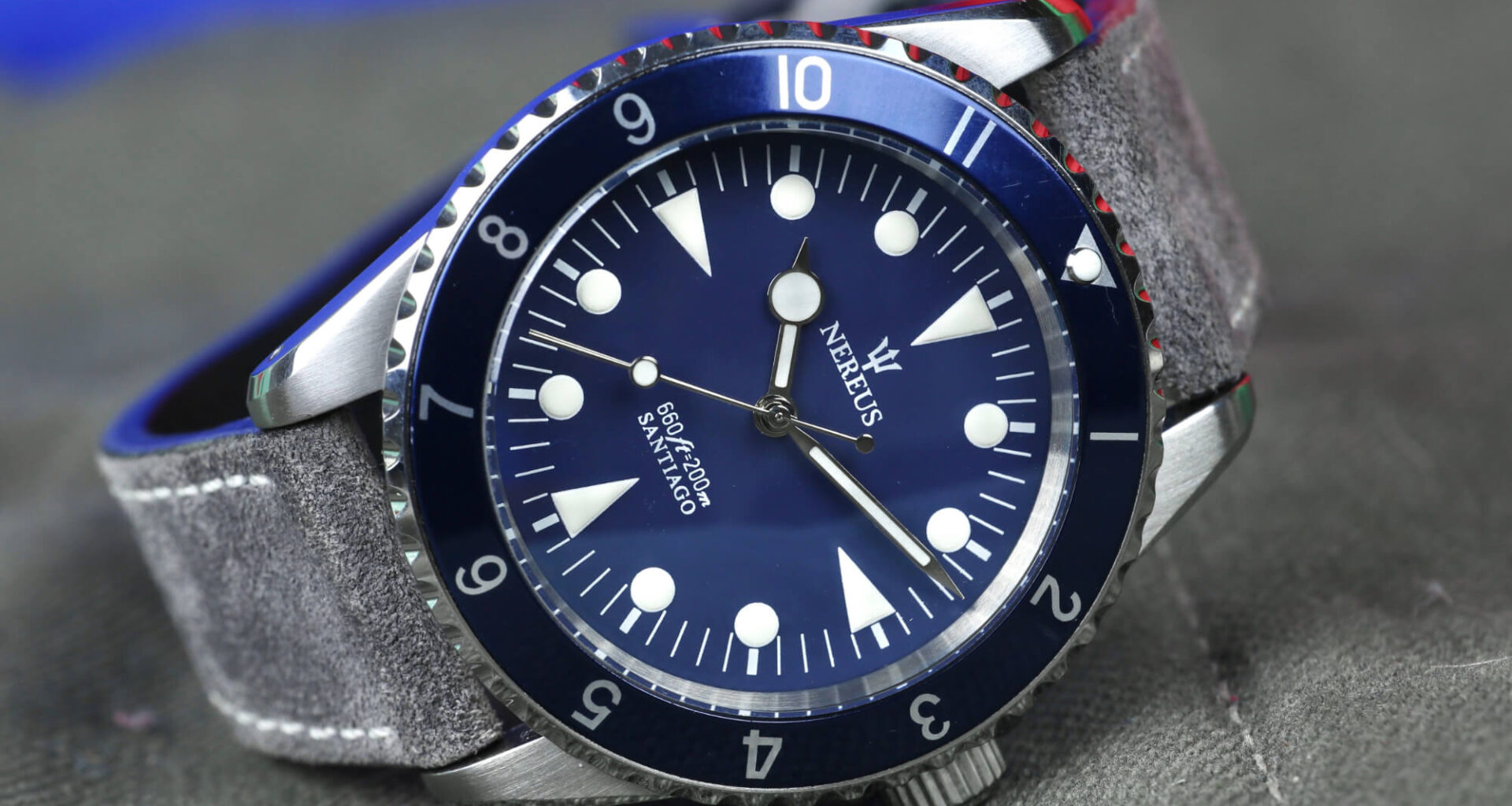 Nereus Watches is a new brand from the brains behind Cincy Strap Co. If you know Cincy Strap Co., you know they make great straps; everyone at WatchClicker HQ has been a fan for some time. When they reached out to tell us about the Nereus Santiago Diver, we were excited to try out both the black and blue models.

Those with a keen eye and savant knowledge of Tudor will have already noticed the similarities between the Santiago Diver and the Tudor 76100. Introduced in 1984, the 76100 was not long for production, and the best models feature the lollipop or non-Mercedes hand. The Santiago Diver’s resemblance is no accident: founder Zach Stephens loved the 76100 and wanted to pay homage to that model while still making it his own. 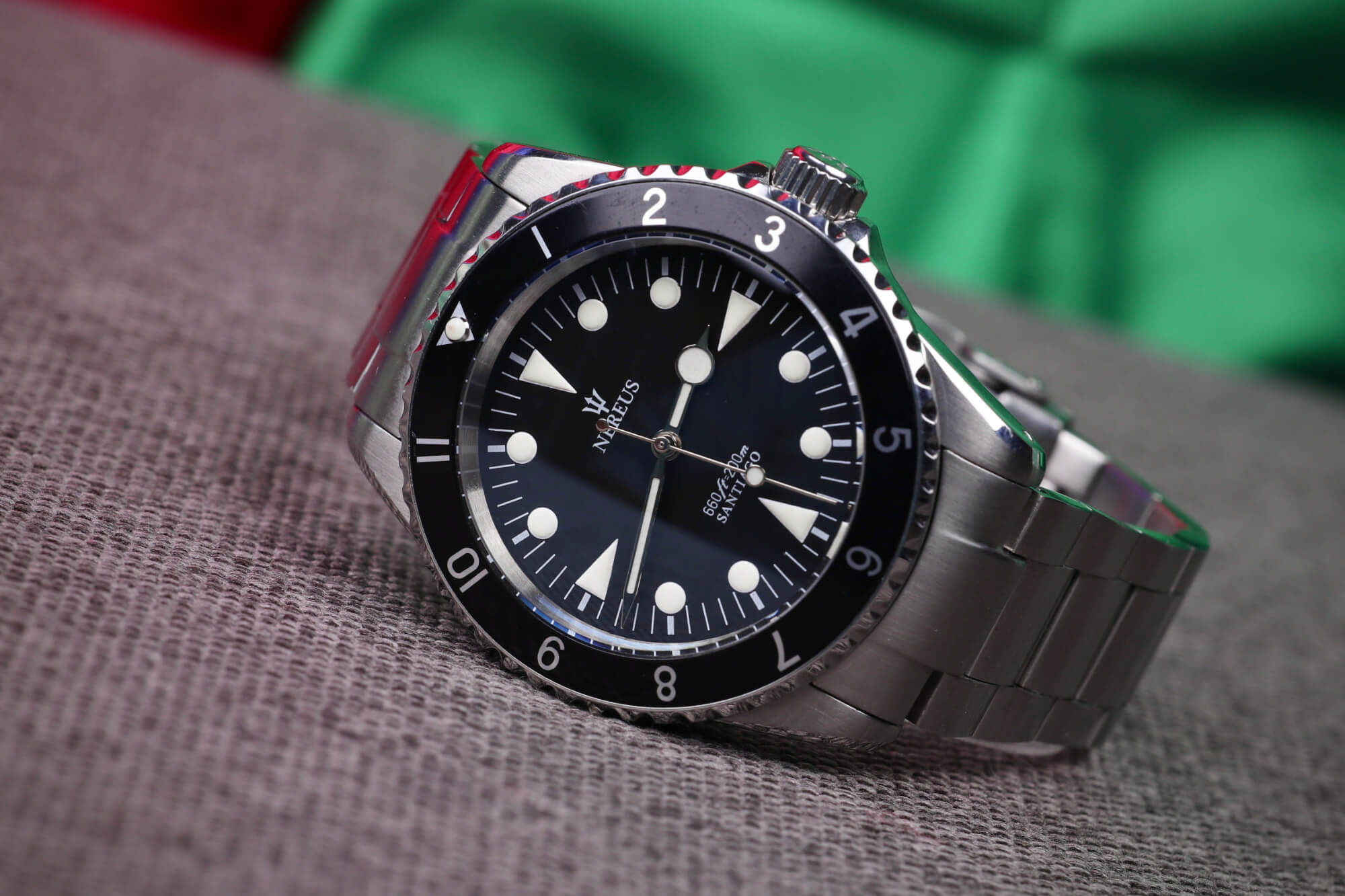 One simply can’t argue with the dimensions of the Santiago Diver. 40mm across and 48mm lug-to-lug will sit well on just about any wrist. The limited curvature of the lugs isn’t enough to help it sit any better (or worse). It wears like an old Rolex/Tudor because that’s essentially what the case is. That’s not a bad thing. 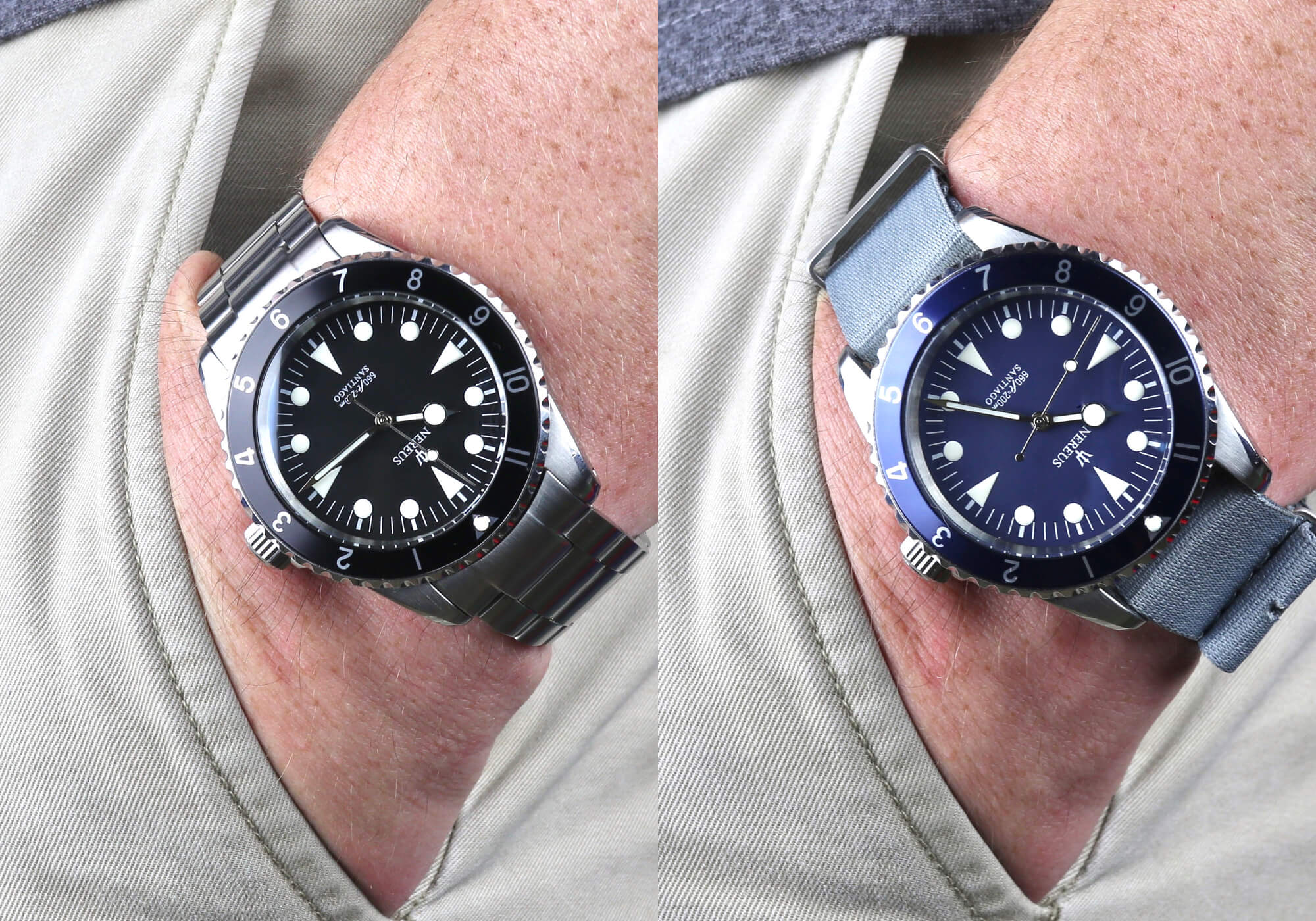 The dial is easy to read at a glance thanks to the white-on-blue/black contrast and a balanced layout. The matte finish of the dial plays well against the shine of the aluminum bezel insert, and similarly I like the way the brushed lug tops act like a subtle racing stripe through the otherwise polished case. 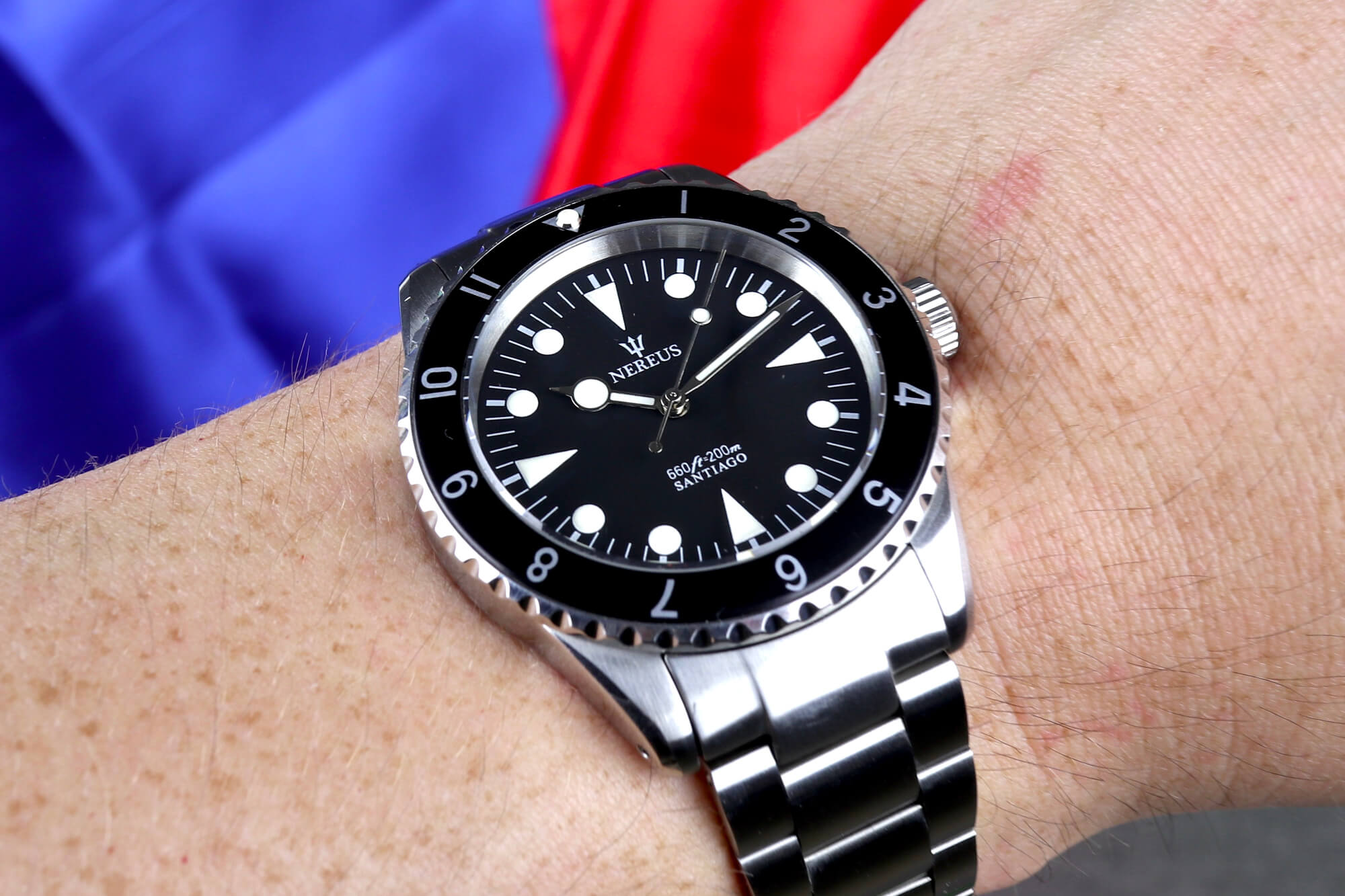 One of the standouts with this watch is the lume. It’s not the brightest I’ve encountered, but it’s certainly bright enough and charges quickly, with good lasting power. What sets it apart from so many other watches in the microbrand category—especially homage watches—is the balance. The hands, markers, and even the bezel pip all shine evenly. That’s rare enough that it’s not just worth mentioning, but it’s something I enjoyed each time the lume shone.

Another great thing about wearing the Nereus Santiago Diver is the myriad straps that can go with either dial. Because the design is relatively simple and features 20mm lugs, strap swaps are a cinch. I found several combos that I loved and you’d no doubt be able to find even more. 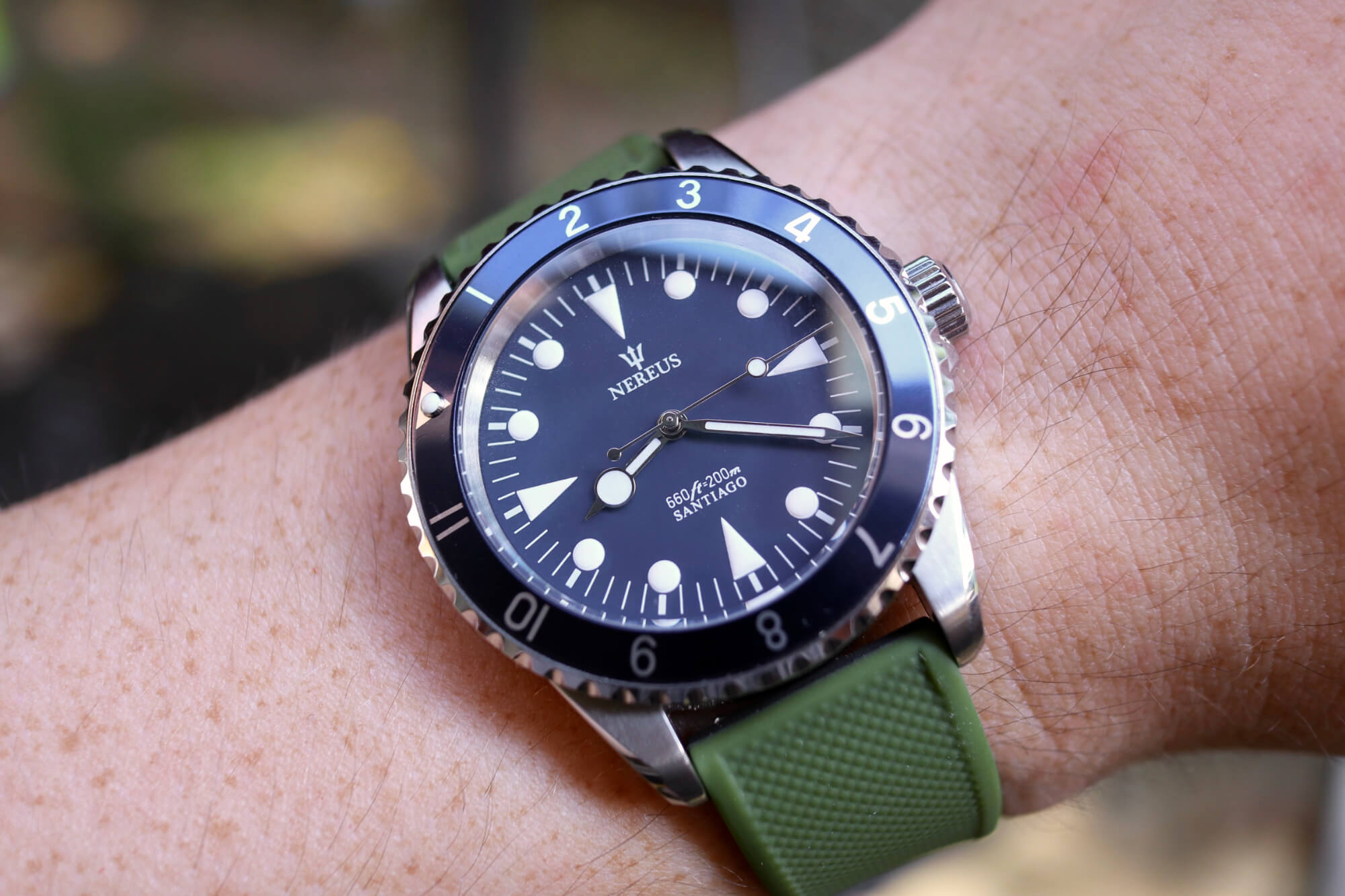 As mentioned at the top, the Nereus Santiago Diver is an homage to the discontinued Tudor 76100. And nowhere is that truer than the dial. The matte blue is much more iconic Tudor than the black, but the 76100 was available in both hues, so here they are. I liked the blue better. There’s almost a dustiness to it, the saturation turned down, and this is clear against the deep blue sheen of the bezel. I think it’s owing to the contrast that I prefer the blue to the black, which offers a truer match of black-on-black. 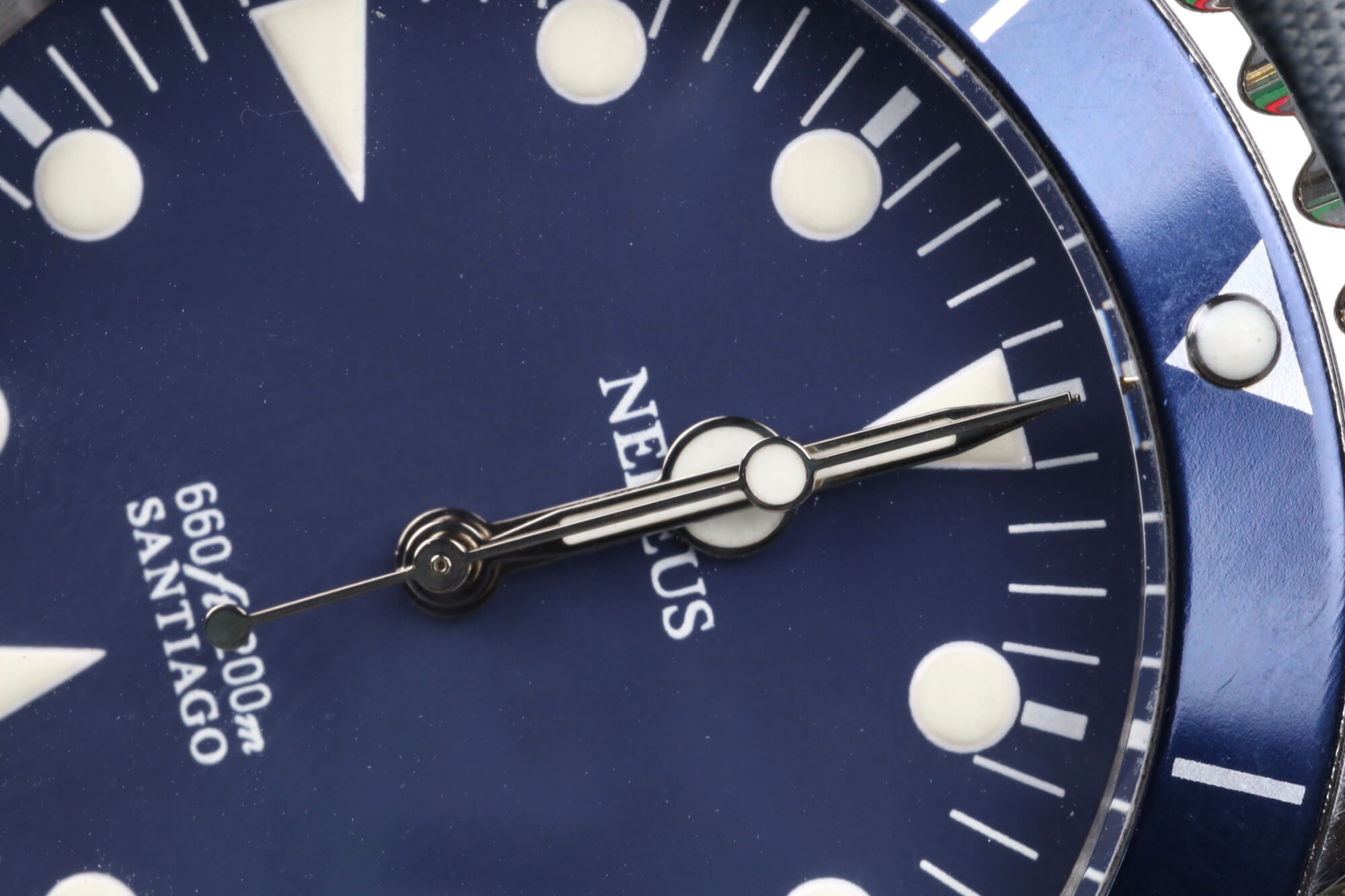 The star under the sapphire crystal is the hour hand. The signature of the Tudor 76100 was undoubtedly the lollipop/non-Mercedes/whatever-you-want-to-call it hour hand. The big disc that sits at the end makes reading the time a snap, and when lit up, is a veritable lume lollipop. And then the seconds hand is another lollipop—it’s like a candy store! 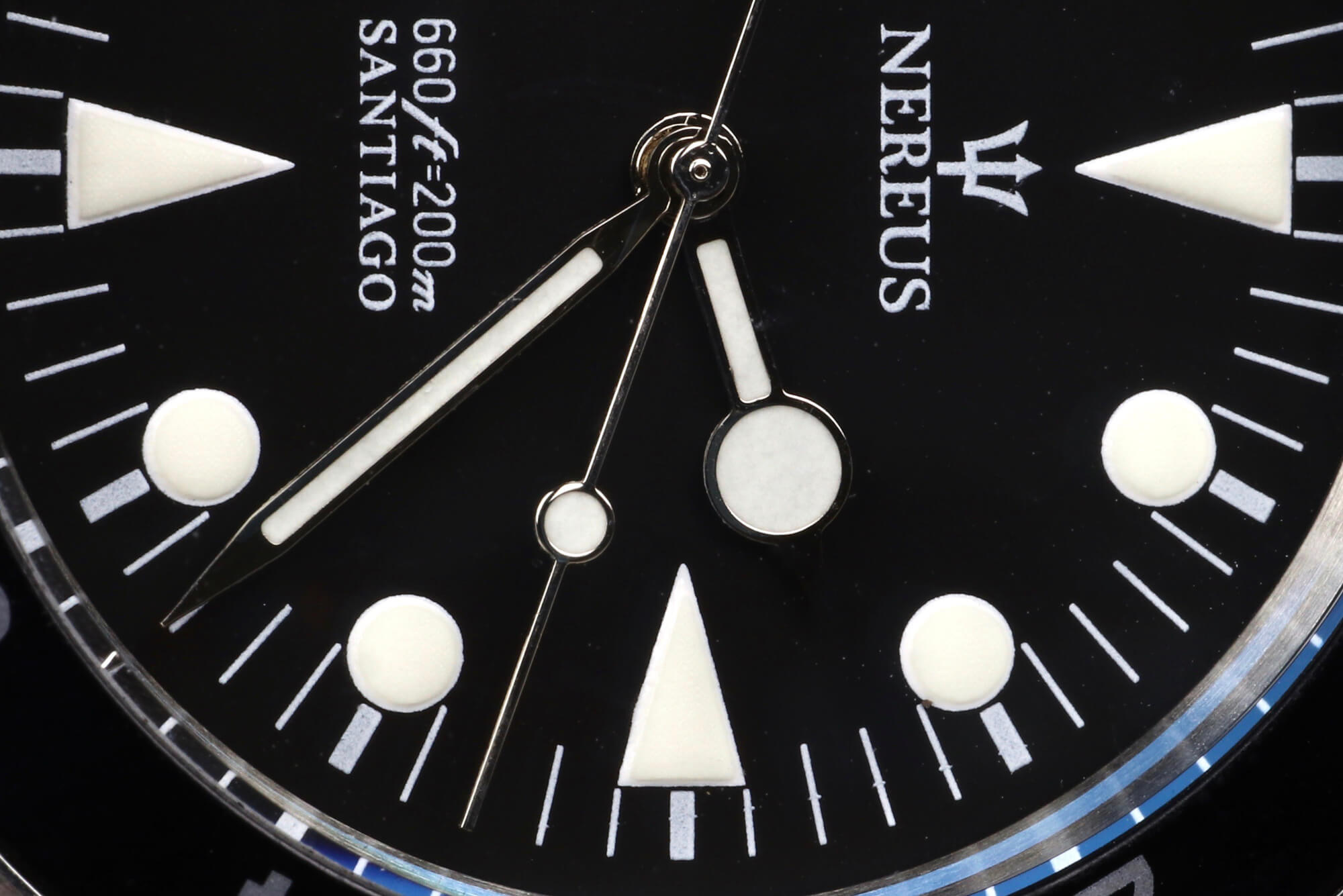 As to the dial layout, we have a near 1:1 of the 76100. Long, printed triangular markers sit at the cardinal hours, while round plots mark the remainder. I really like how the minute hashes extend into the dial to cradle the hour markers. Outside of the hashes, the existing gap will be narrowed for production models, with a wider rehaut being used. Above and below the hands are your typical text, in good proportions: the logo and brand above, with the water resistance and model below. I especially like how they reproduced the thick, script-like text for the units seen on the 76100. 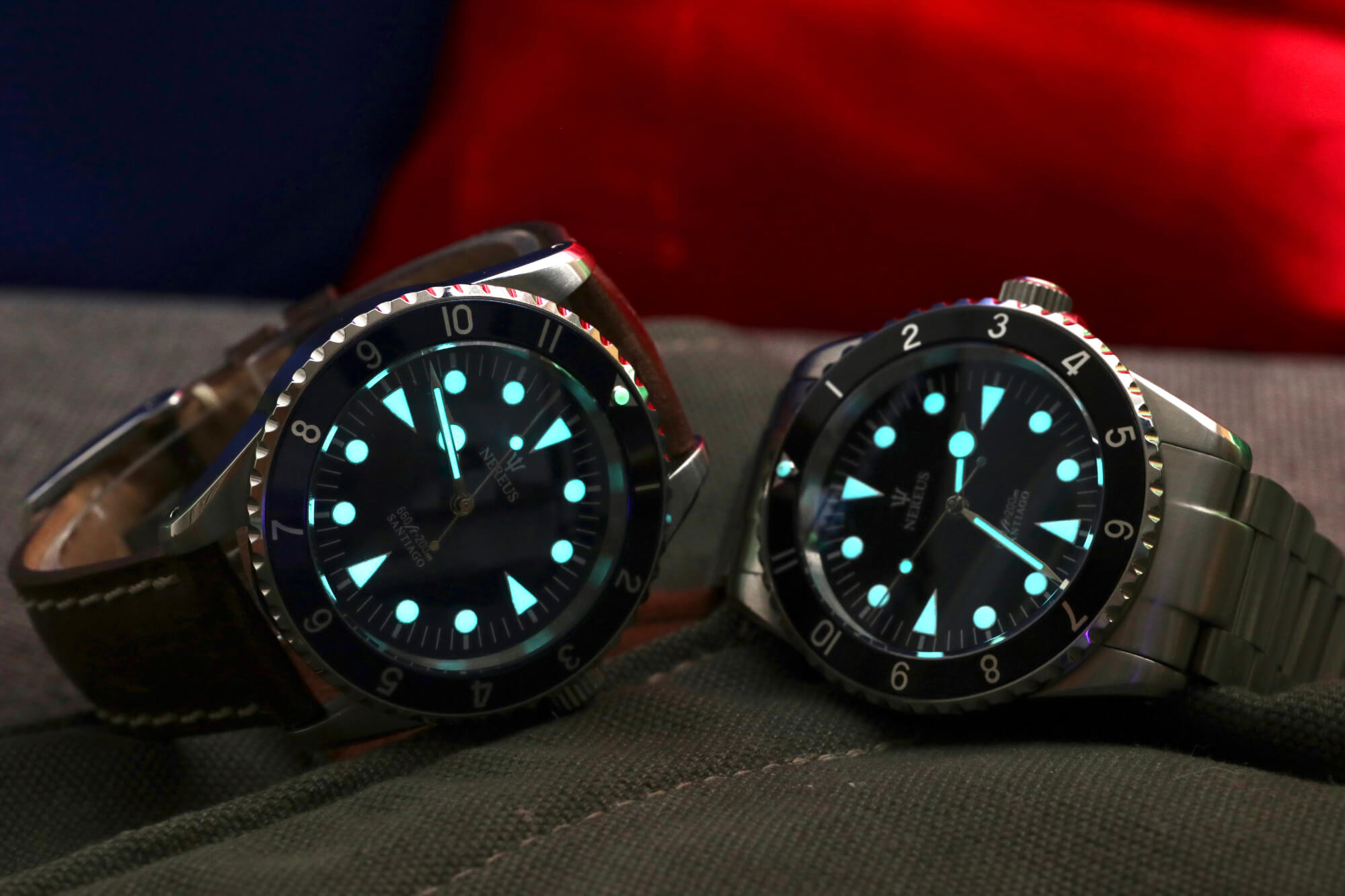 The dial comes with the option of date or no date. Those with the date display will have the black and red alternation of a roulette date wheel, but the only reason I’d ever support getting the date is if you simply cannot live without such a function. The inclusion of the date window completely disrupts the symmetry of the dial. The window itself is unadorned and underwhelming. On the original 76100, the cutout window was magnified with a cyclops on the crystal, but here you don’t even get a beveled edge or a frame. So, preserve the balance and go no-date (and I say that despite the phantom date position this will create on the crown). 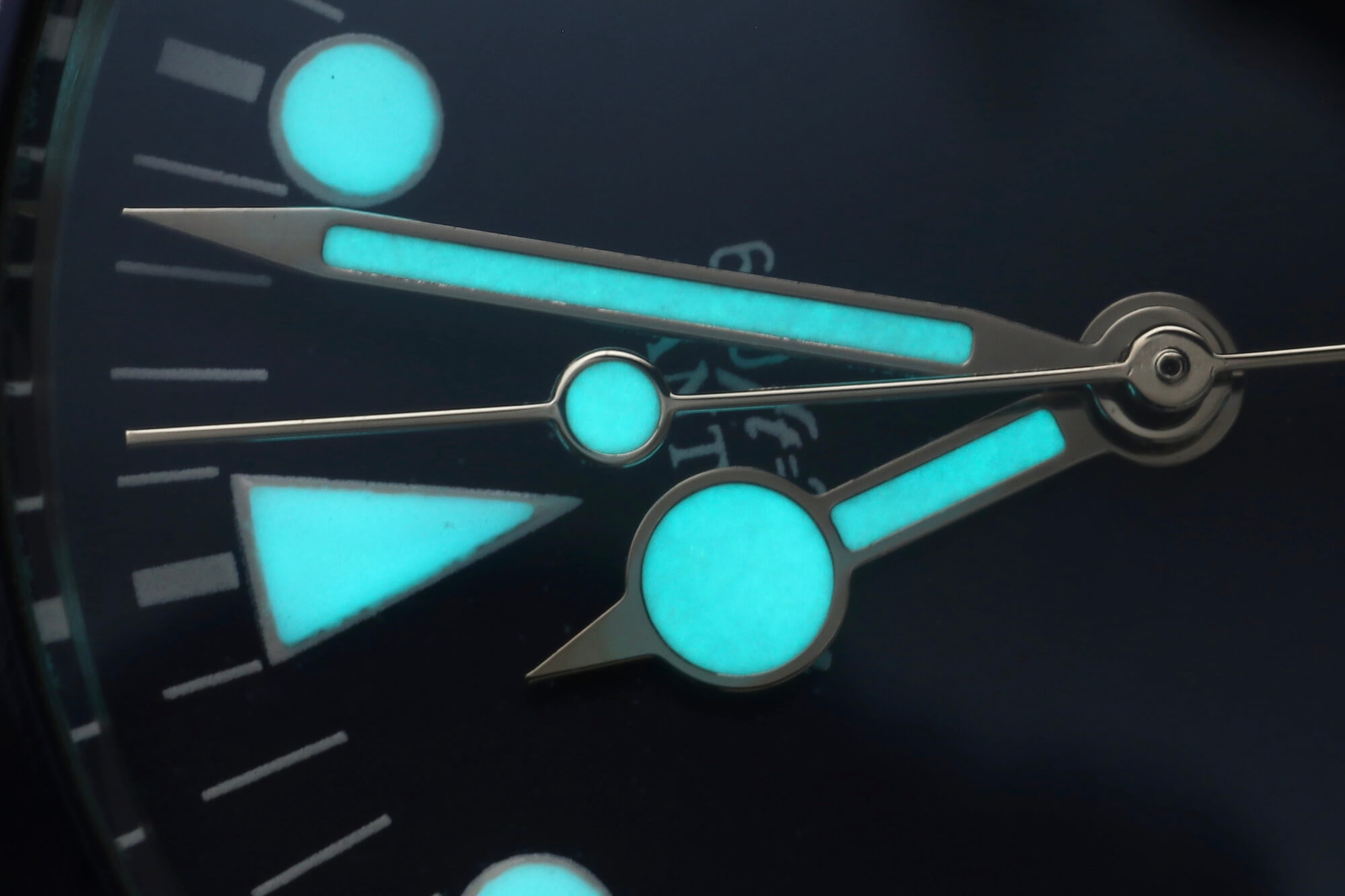 The case is where the Nereus Santiago Diver diverges a bit from its forebear. While the overall profile of the case is undoubtedly similar, some key factors differ. The case shape is classic vintage Submariner style, with minimal overall curve and the top-curved lugs. What Nereus has added is a great chamfer along those lugs, which features the same polish as the side. It adds a bit more dimensionality and life, and coupled with the brushed tops of the lugs, creates a more dynamic case. 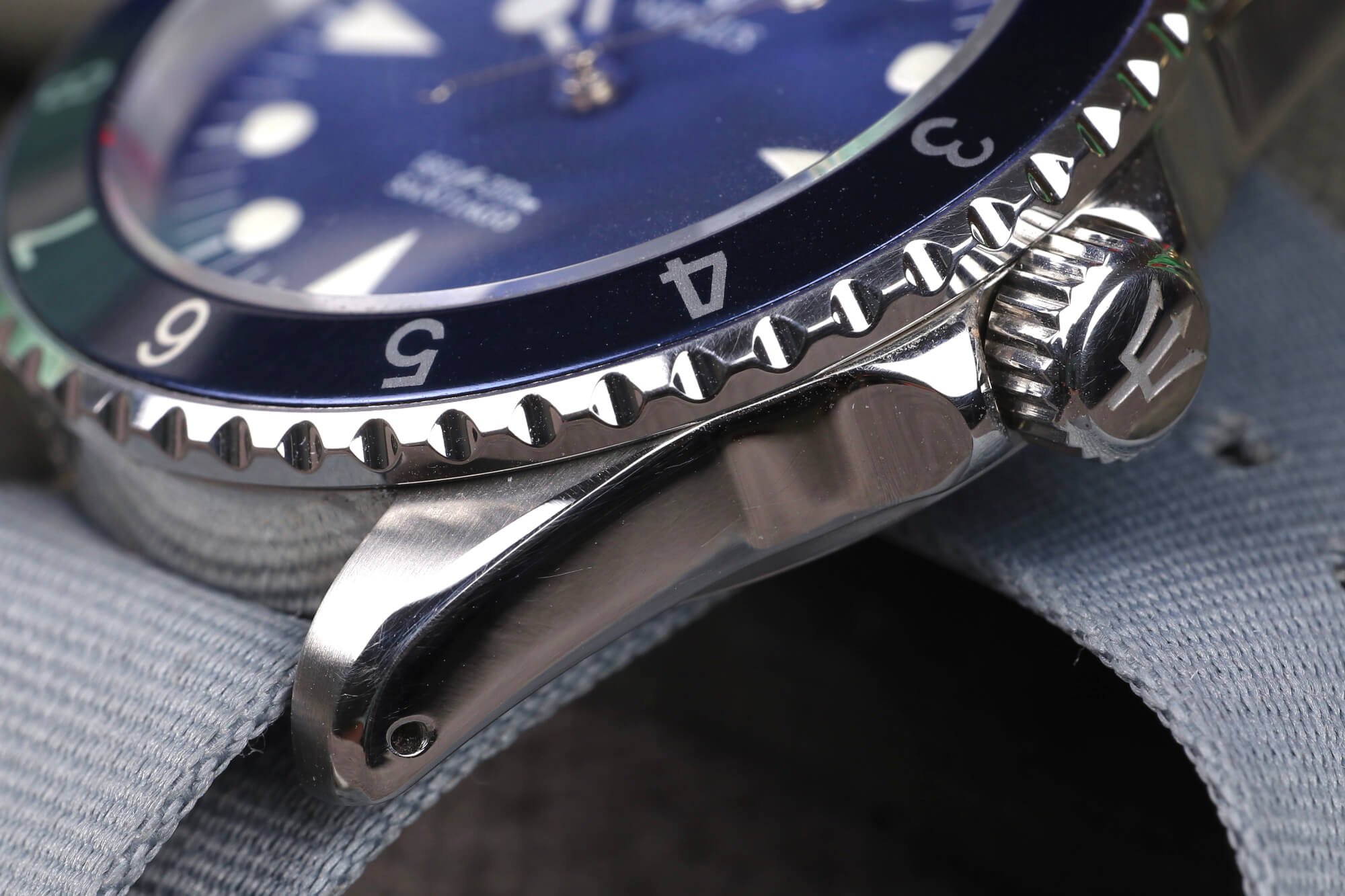 I found two issues with the watch, and both were regarding the case. The first was the crown guards, which were not long enough. Fortunately, they will be more substantial on the production models. The second issue was the action of the bezel, which is available with GMT or dive markings. While it wasn’t nearly as stiff as other watches I’ve handled, it could’ve been easier to turn. The click, too, was a bit unsatisfactory. 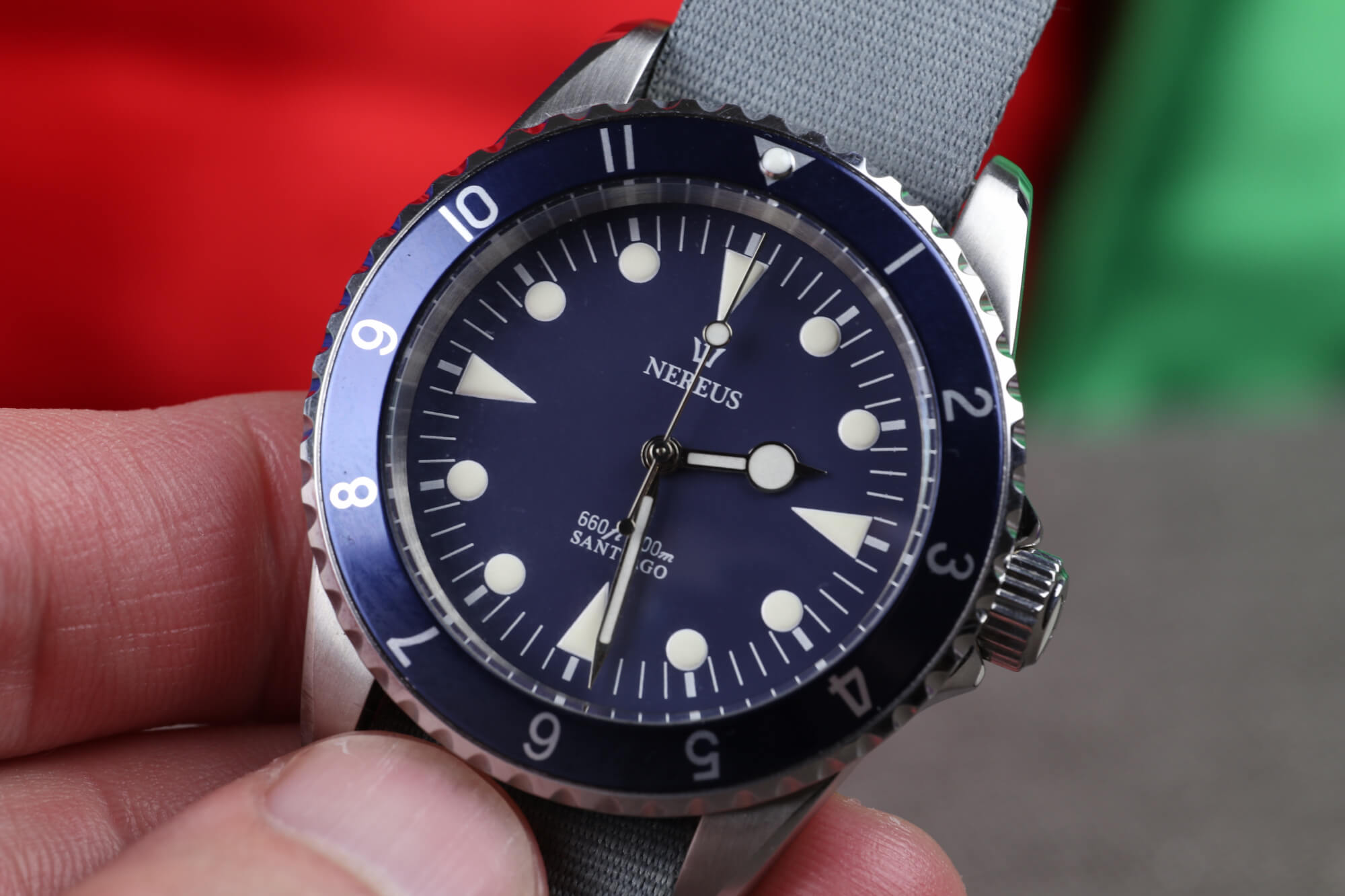 On the back, a simple screwed-in caseback protects the Miyota 9015, and features a plainly etched logo and brand name, as well as obligatory peripheral text. I would’ve liked to see more, but I suppose the plain back keeps with the watch it seeks to emulate.

It’s hard to review the Santiago Diver bracelet, as the prototype bracelet I received is being completely overhauled. I barely photographed it. The specs on the new bracelet are what I like to see in a watch: female endlinks (for better articulation), screw pins (for easy adjustments), and a machined clasp (for reliable closure). Sounds good to me. Similarly, I was unable to try out the included canvas strap that will be included. The drilled lugs will make swapping easy between those two and the included seatbelt NATO-style strap (which is not pictured, but which I have tried and is top quality with solid hardware). 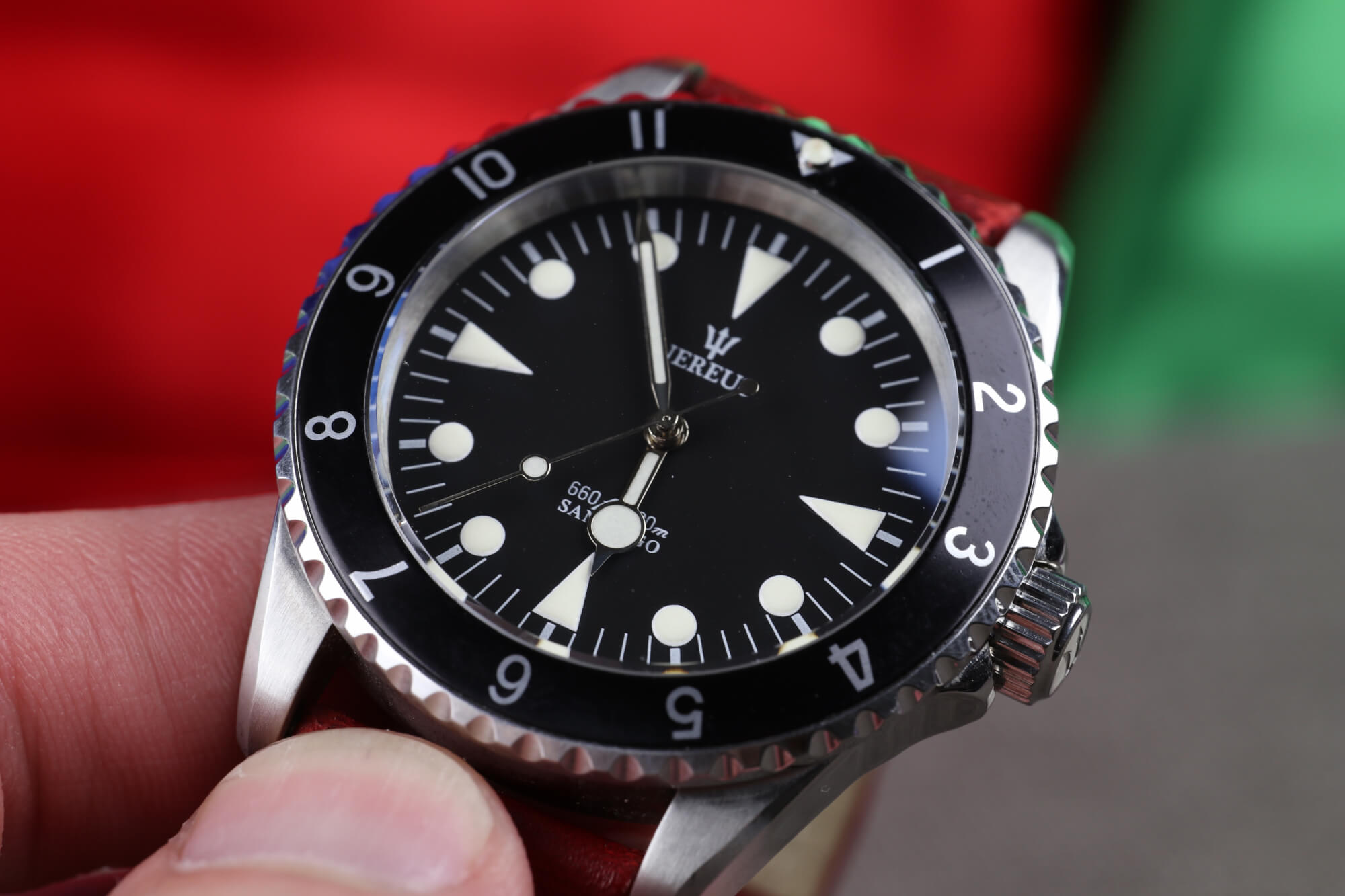 The watch world has no shortage of homage pieces. Homages to both modern and vintage Submariner-style pieces (though some hew closer to straight copies) are especially prevalent. But to my knowledge, no one has tried to recreate the 76100. Finally, Nereus has done so with the Santiago Diver. They’ve done a stellar job. The bezel action may not be perfect, but it’s serviceable. You’ll have to cross your fingers on the bracelet, but the specs sound good. And man, oh man, that lume.

The pre-order pricing on the Santiago Diver is a great deal at just $399. You’re getting a well-built watch with a decent movement that tips its hat quite fully to a classic Tudor model. I’m a bit torn when it comes to the retail pricing. Certainly, there are other watches in this segment that cost the $625 that’s being asked, some better, some worse. Just taking the watch and its specs into consideration, I think that’s on the upper end—but still in the range—of reasonable. But there is some value added in such a faithful recreation (with what I consider an improved case) of a classic that hasn’t been revisited by any other brand. And $625 is a fraction of the cost of an actual 76100, which will run you no less than $5000. You be the judge.

More Images of the Santiago Diver

Mike became obsessed with watches in 2015 after spending an inordinate amount of time finding the perfect wedding watch (the Frederique Constant Slimline Automatic). He prefers a well-executed date window or none at all, and strives for a diverse collection with limited overlap. When not fretting over which watch to wear with which strap, he works as an emergency mental health clinician in Northern Virginia, where he lives with his wife and son.