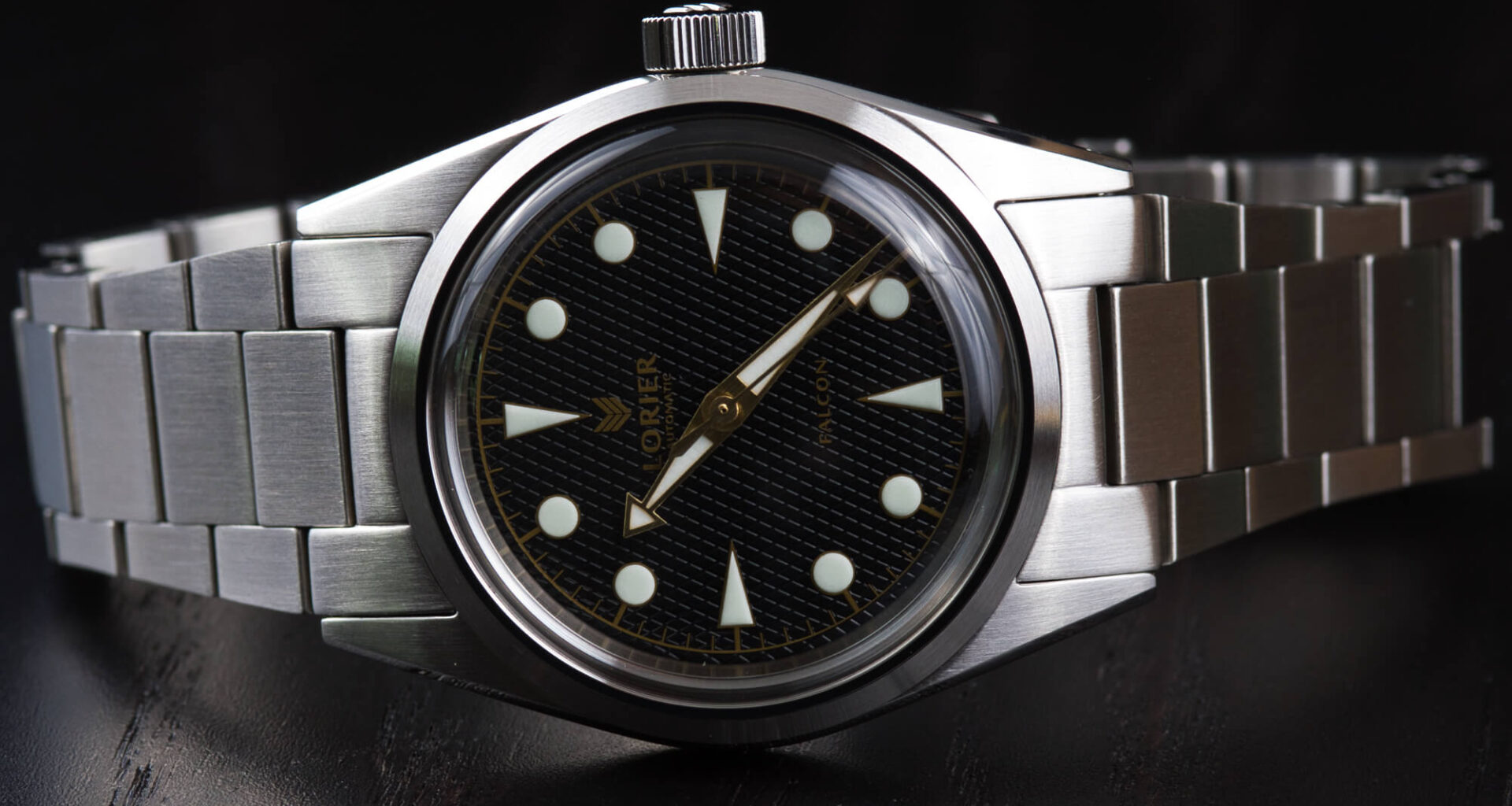 Although Lorier is a relatively new company, it has the feel of a company that has been around forever. Started by the charming wife and husband duo Lauren and Lorenzo Ortega in 2018, Lorier hit the streets running with their incredibly popular Neptune dive watch (review here). Although Lorier’s next few releases felt almost like spin-offs of that original Neptune, Lorier has continued to develop and massage each of their (now) four models. As of today, including the pending Hydra II model, Lorier offers four totally distinct watch models, but with an extremely consistent DNA that is refreshing to see in such a young brand. 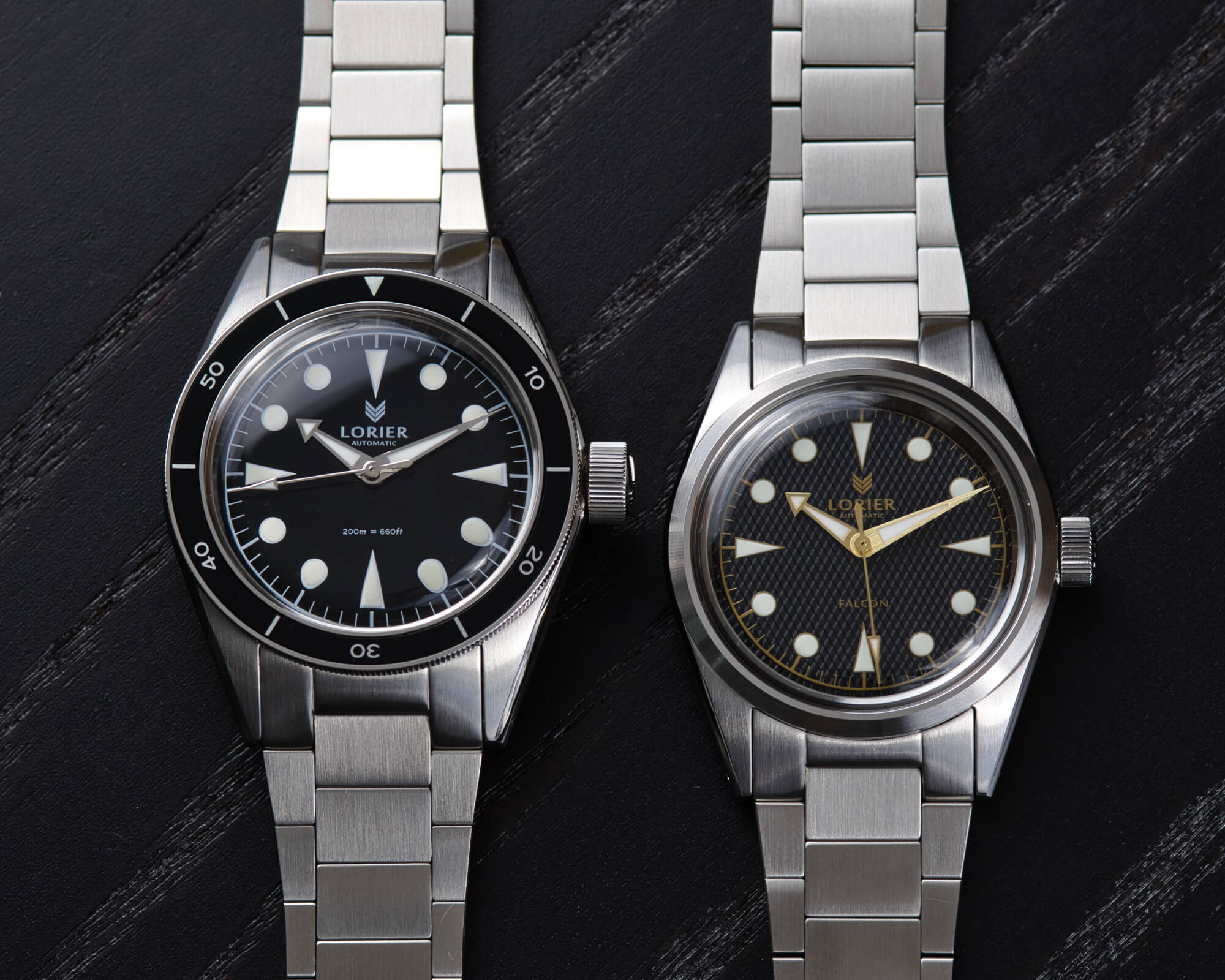 When I first saw the early images of the Lorier Falcon Series II, I was certain that it was going to be a winner. With that said, it takes some chutzpah for a company barely out of its toddler years to design, prototype, and drop the cash necessary to release a 36mm sport watch. But this watch, perhaps more than any other watch in their catalog, is an embodiment of what makes Lorier special: their singular devotion to the great sport watches from the mid 20th century. Lorier isn’t making homages to specific watches, but rather homages to an entire generation of watches, and I think they are doing it better than just about anyone in the game. 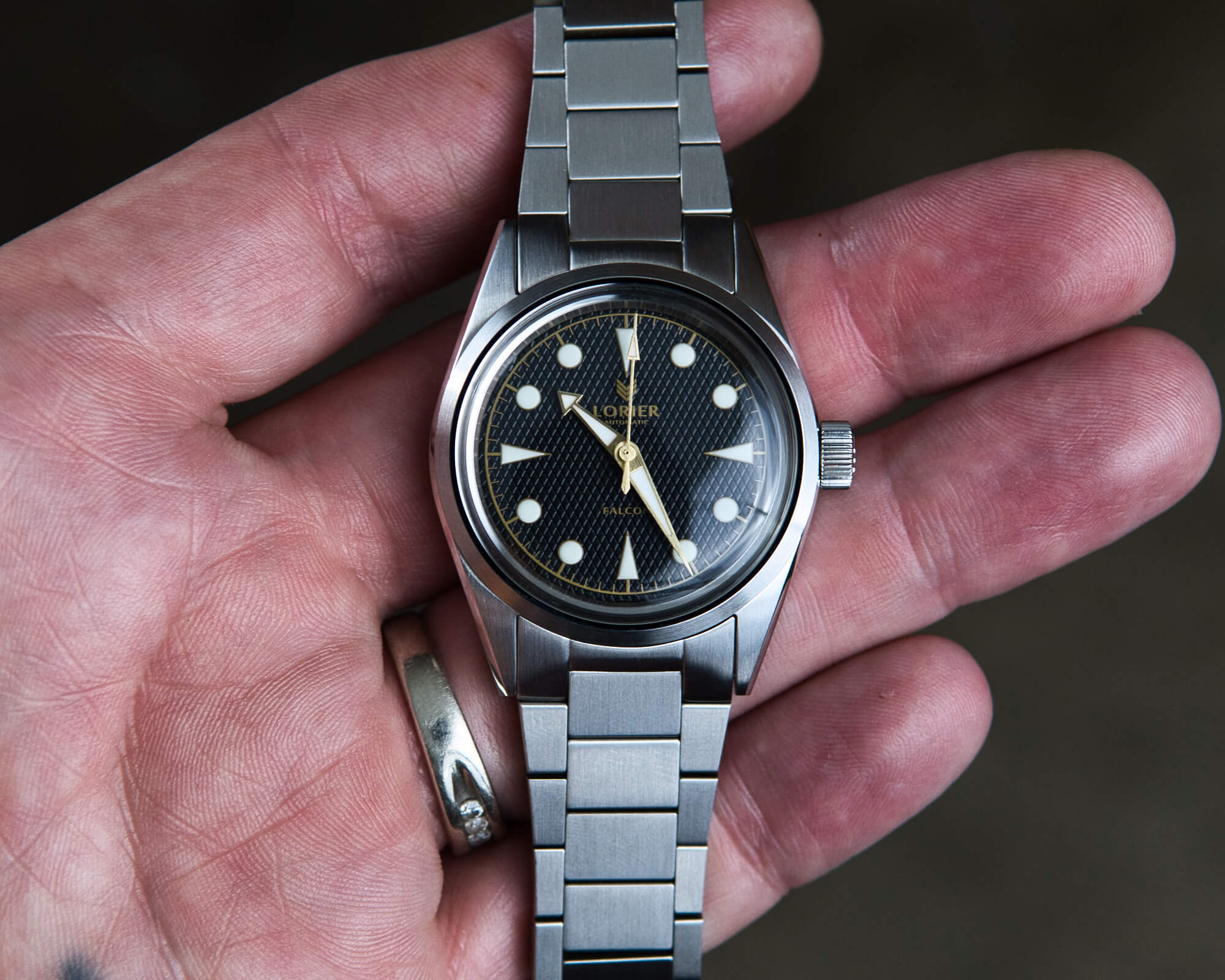 Lorier says the Falcon is “styled after the iconic watches worn by mid-century explorers,” and it doesn’t take more than glance to understand what they mean. I think it would be unfair (to Lorier) to make comparisons to specific watches, but, suffice to say, one could easily imagine Sir Edmund Hillary or Tenzing Norgay summiting in the Falcon. But, what about today’s explorers – does it make any sense to, today, buy or wear a watch that is (relatively) diminutive by modern standards? 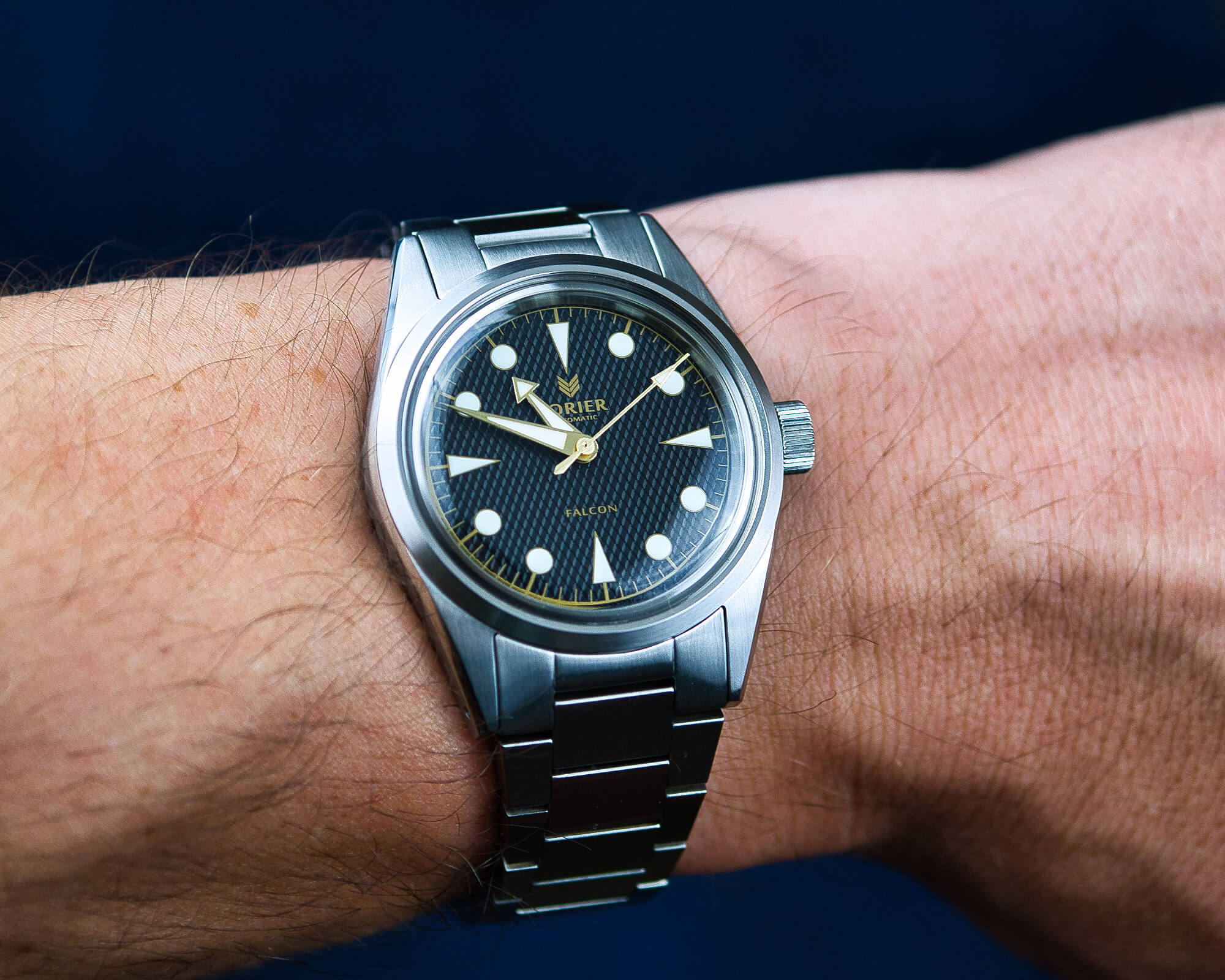 For my part, the answer is definitively YES. You probably already know your watch size sweet spot, but if you are not a yeti, and/or you are not currently wearing sunglasses turned backward on your head, your sweet spot should include this 36mm watch. I don’t like the idea that a watch wears bigger or wears smaller (watches wear exactly as big or small as their dimensions), but the 36mm Falcon has more wrist presence than you might imagine.

Wearing the Falcon II makes me feel as if I could climb a mountain, attend a board meeting, cook (and eat) a pizza, and then jump in the swimming pool with a beer. With its more-than-adequate 100m of water resistance, screw-down crown, and acrylic crystal, this watch feels as durable as it looks good. This is truly a Go Anywhere Do Anything watch, and unlike most competitors, it has no single element that takes away from its ability to fit the role. 36mm is not going to work for everyone. The Falcon stands basically alone in this space, and I’m here for it. 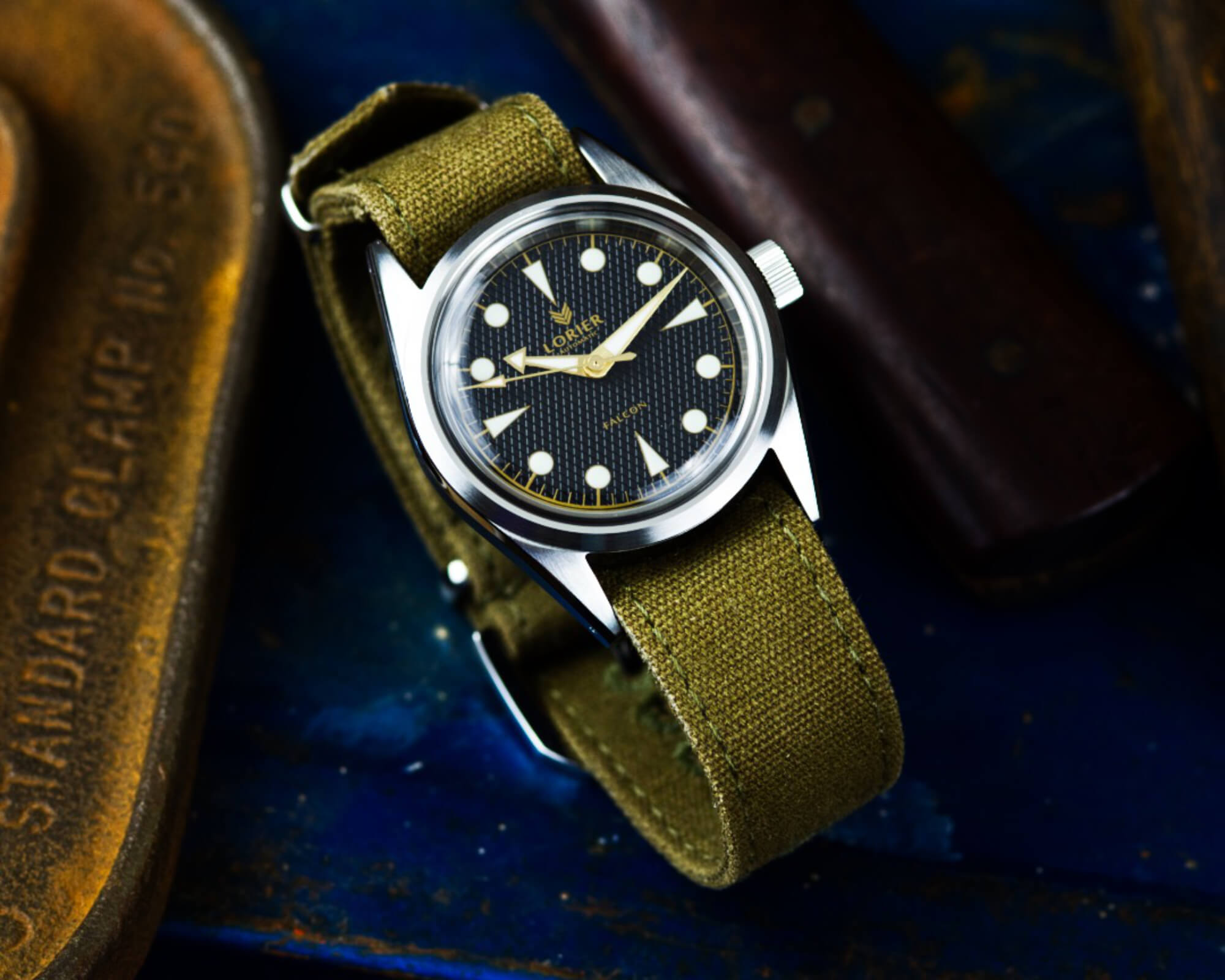 I received the black-dialed, gilt-dressed version of the Falcon. Additionally, Lorier offers the Falcon in green with gilt, blue with steel, and white with a contrasting black. Each of the four colorways has its own feel and produces surprisingly different aesthetics. Being a sucker for a black dial, I received the version I would be most comfortable with, but I could easily see myself rocking the blue or even the white. 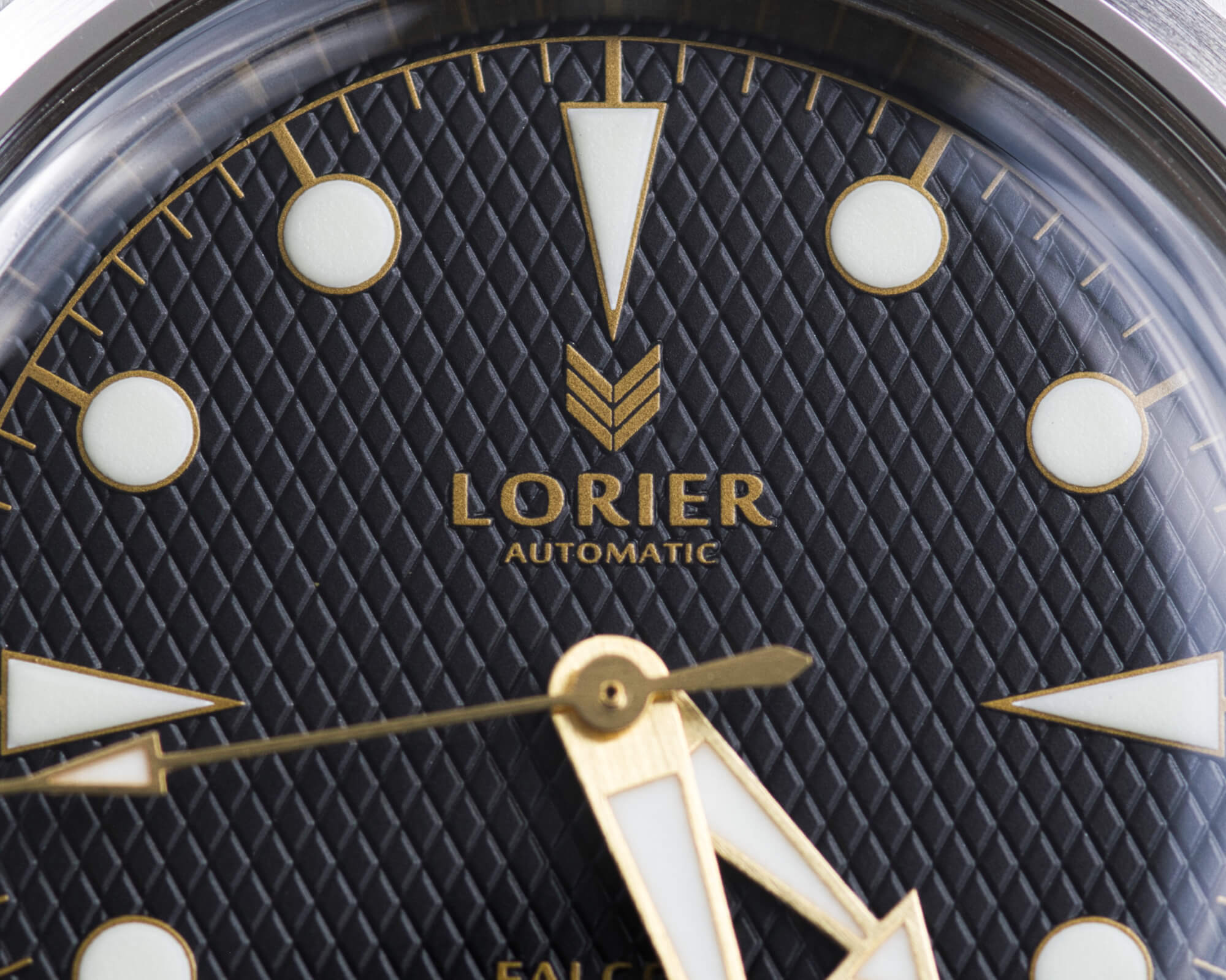 On balance, the Falcon’s business end evokes a familiar vintage feel, but with its maxi-style markers, broad arrow hands, and no date window, an identity crisis starts to emerge. Fortunately, I am not even remotely pedantic when it comes to this stuff, and I think the decisions border on perfect. The (excellent) brushing on the hands allows muted reflections that just barely catch your eye, as opposed to the blingy sparkle of a polished hand. The overall package just feels… classic, and cool. That said, if you want an exact replica of some other watch’s hand and marker set, look elsewhere. 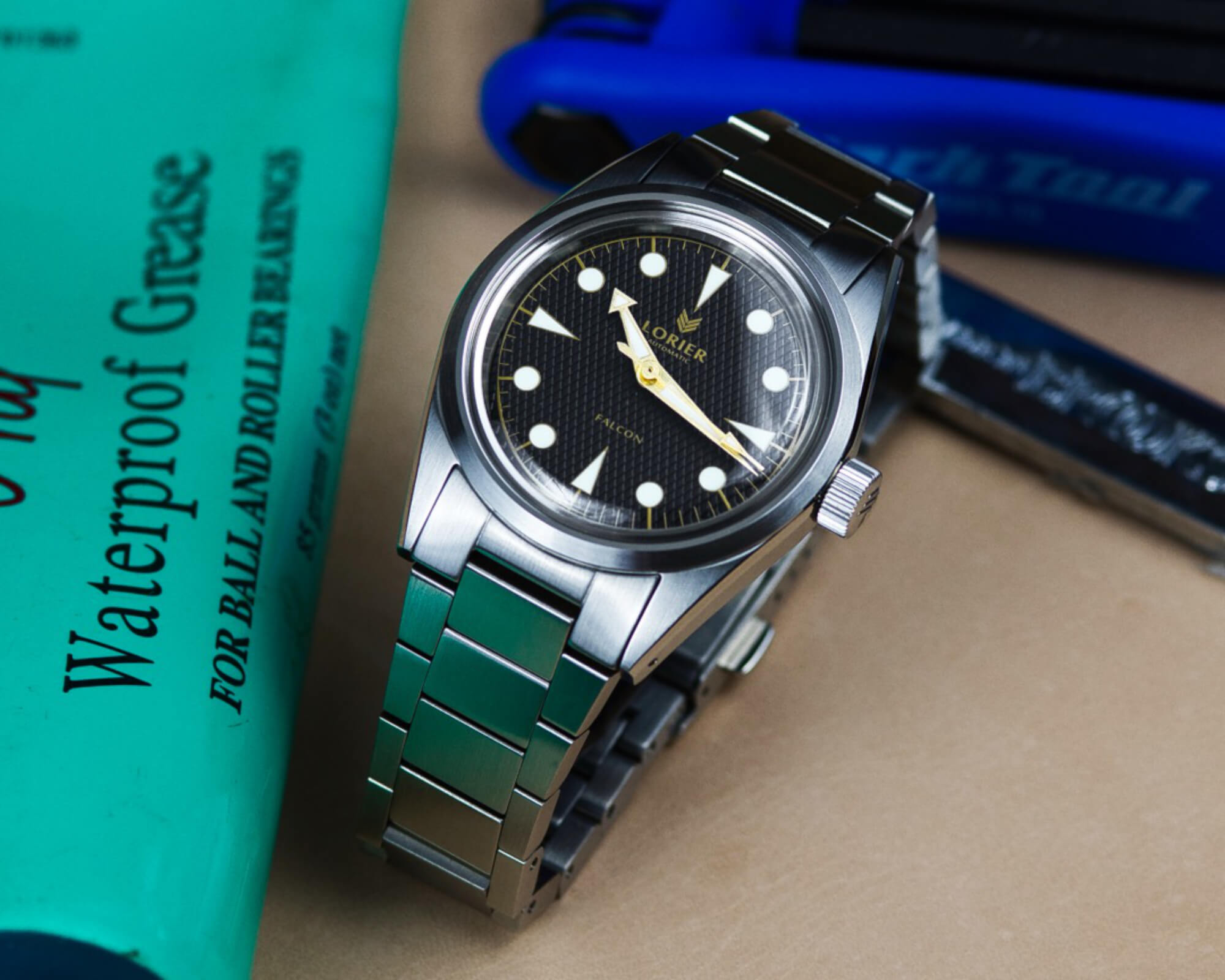 Somewhat ironically, the waffle-textured dial, although perfectly vintage in its own right, lends the whole watch a modern and fresh feel. In contrast to the middle of the dial, where you may miss the diamond pattern if you aren’t looking for it, under the edges of the acrylic crystal, the texture is playfully distressed and distorted. The waffle pattern itself is attractive, sharp, and well-executed, and provides a legible backdrop to the contrasting hands. I suspect there is some science to that legibility, but I don’t know it – you’ll just have to take my word for it. 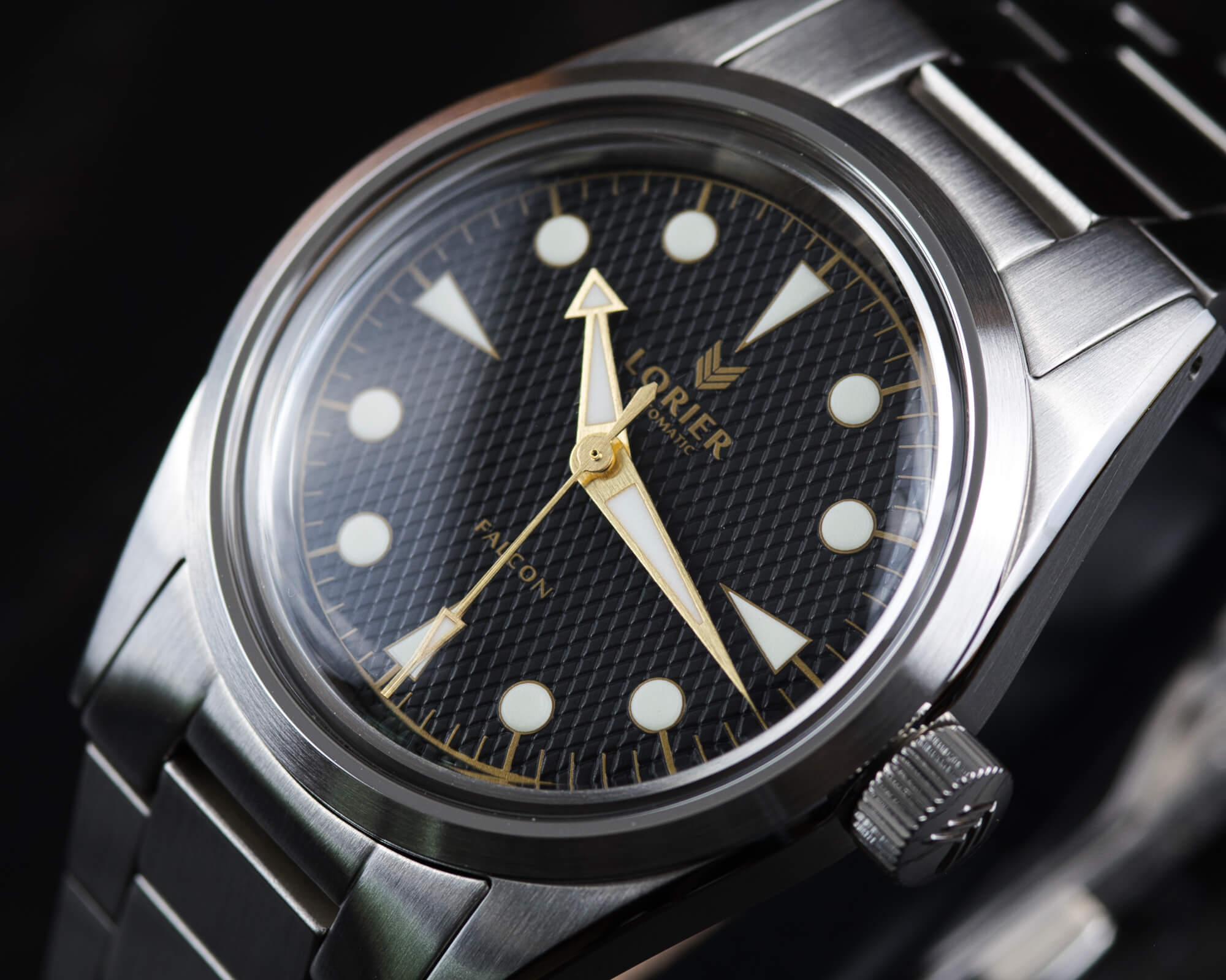 Each of the versions (blissfully) come with non-aged BGW9 lume that is bright, clean, and modern. Lorier has done an excellent job of making a watch that doesn’t ape distress, but instead captures the essence of what made the honestly distressed watches (of today) special when they first came out. 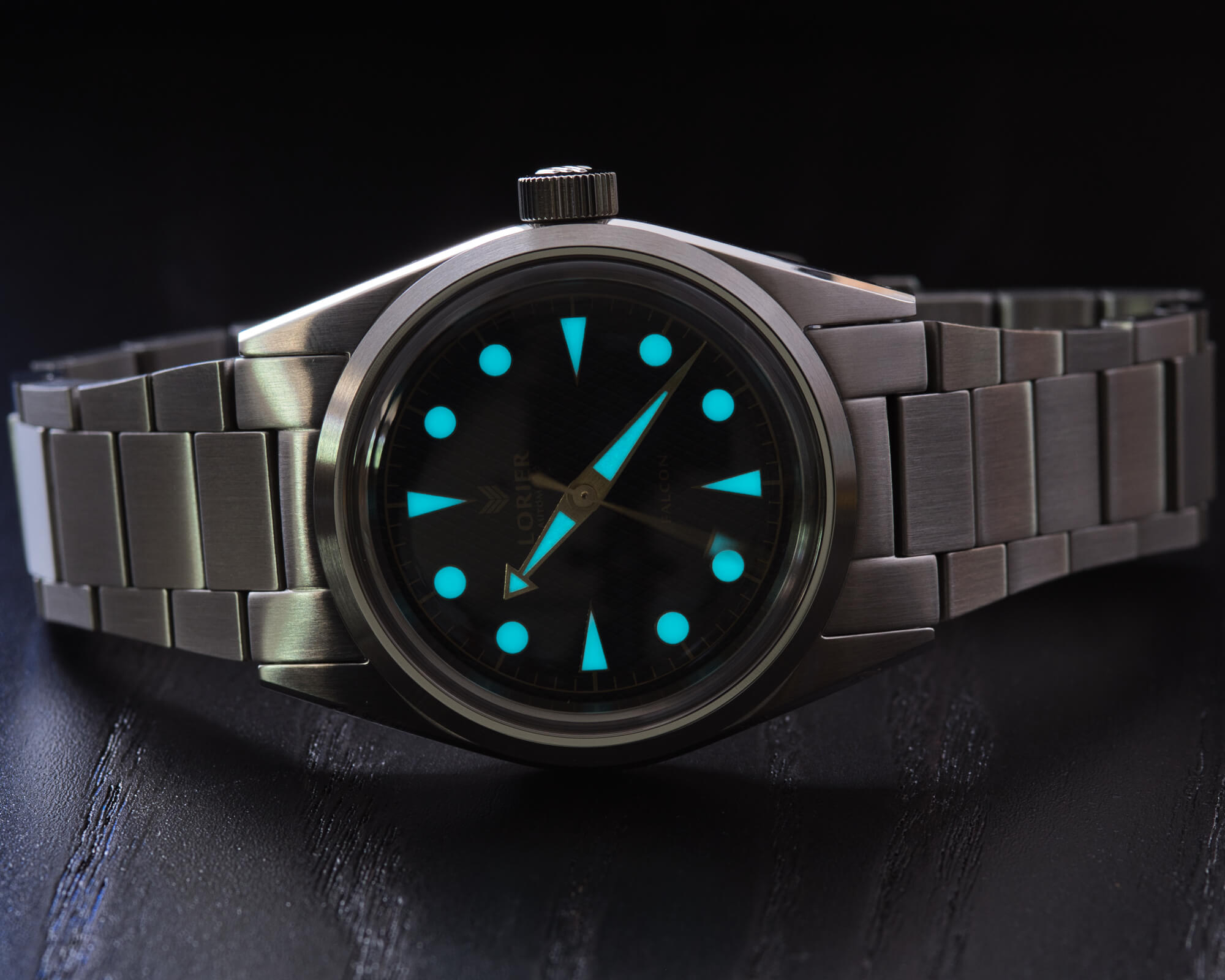 At 36mm across, and only 11mm thick (including the domed crystal), you might expect the Falcon II to feel small, flimsy, or diminutive. It does not. Although it is certainly not a hefty watch, the Miyota 90S5 allows the substantial weight and feel of a mechanical watch in a classically sized package. The polished chamfered edges give the watch dimension and provide substance and wrist presence without getting in the way of anything. 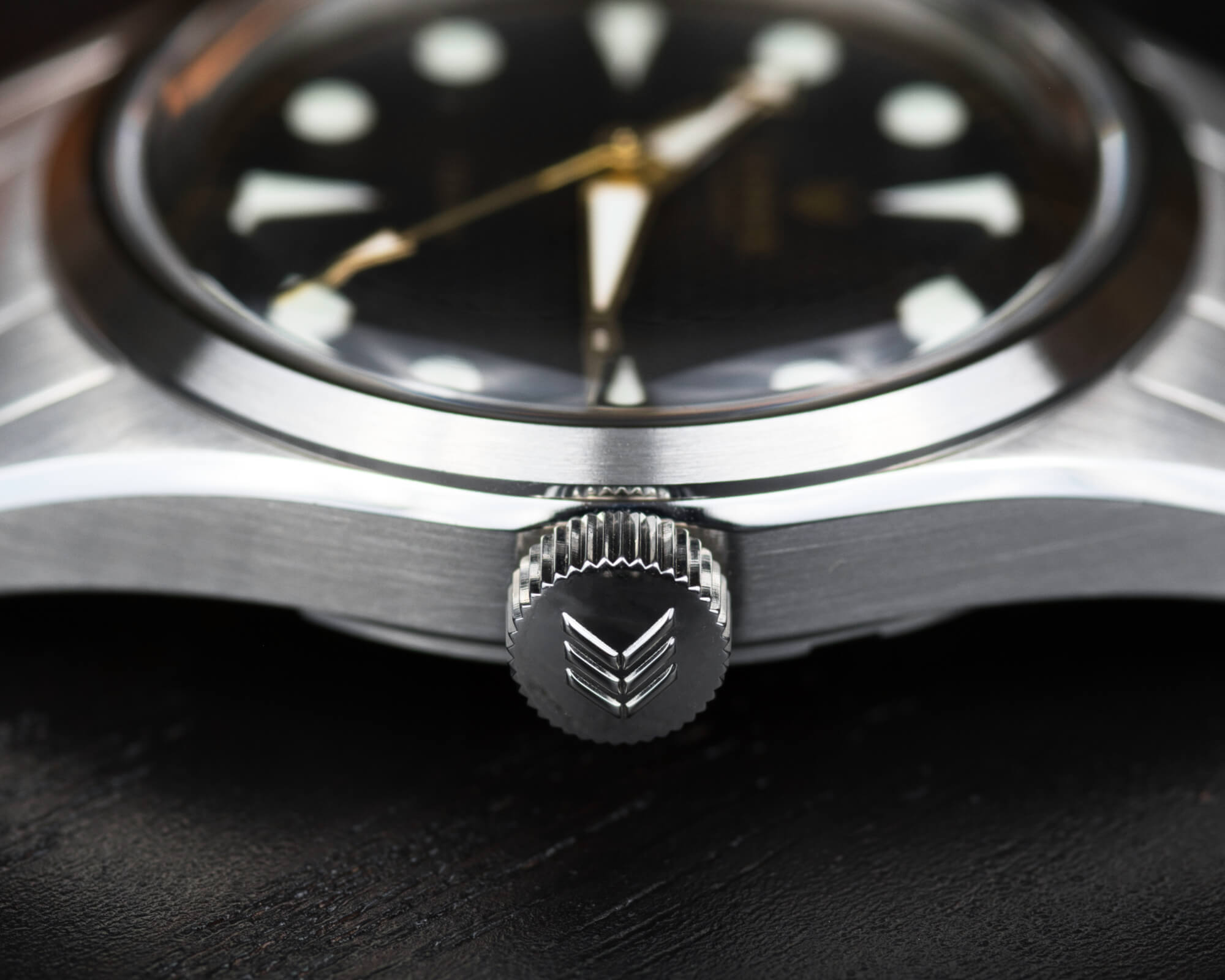 With its clean case sides and no crown guards, the oversized crown sits proudly. If it did not screw down securely, this might be a liability. As it is, the crown is interesting, attractive, easy to manipulate, and totally effective at doing all the crown-y things it was born to do. The placement of the Lorier logo is perhaps unnecessary but certainly welcome. 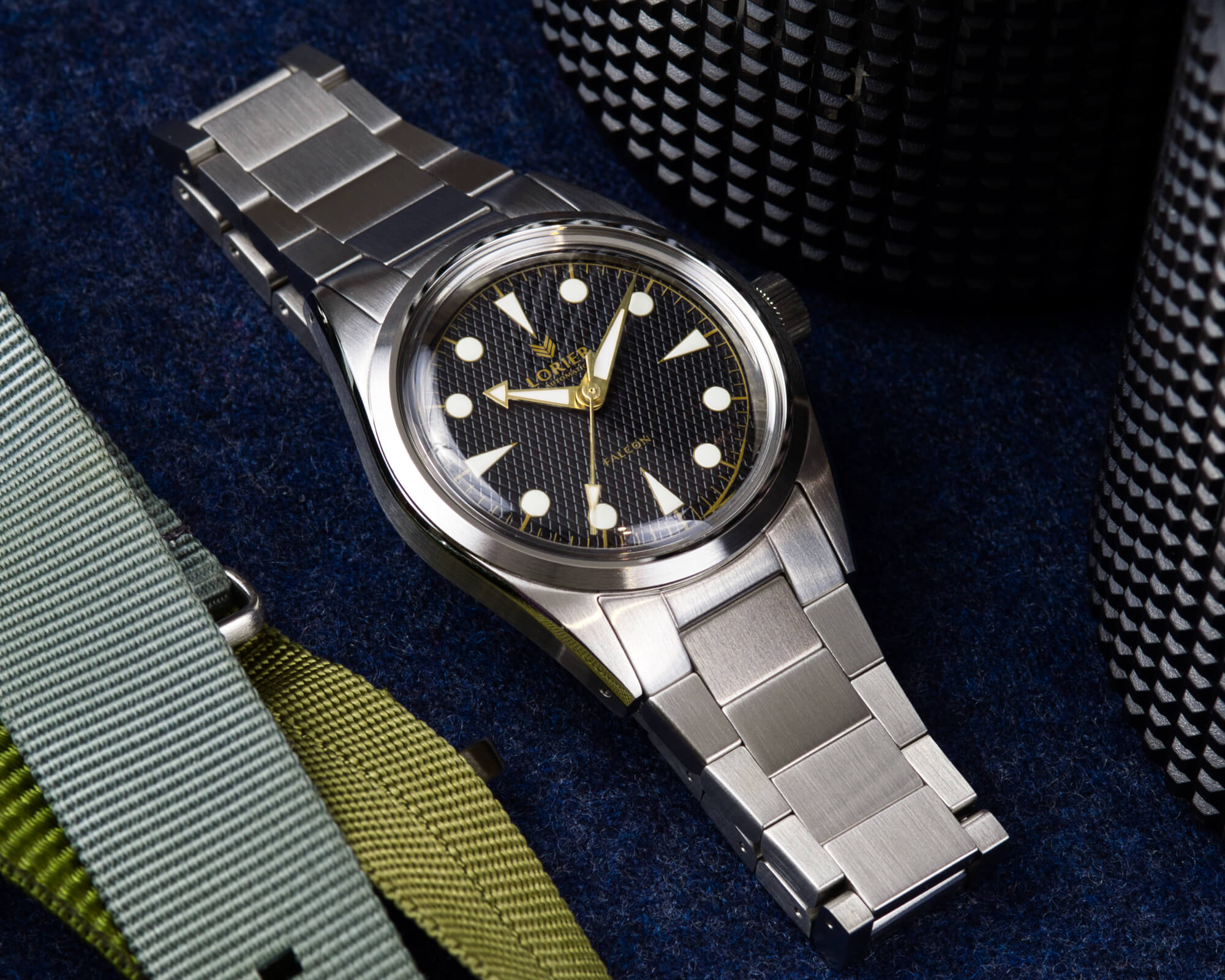 To folks previously acquainted with any Lorier watch, the bracelet attached to the Falcon II is going to be familiar. The flat-link, fully articulated, solid female endlink bracelet checks all the boxes. It’s really a wonderful bracelet. Tapering from 20mm to 16mm, it’s comfortable, flexible, and has the perfect amount of adjustment. The clasp is a delightfully simple side-button-release affair, with the perfect amount of complexity and security to do its job in a modern way, without being even a touch overbuilt. 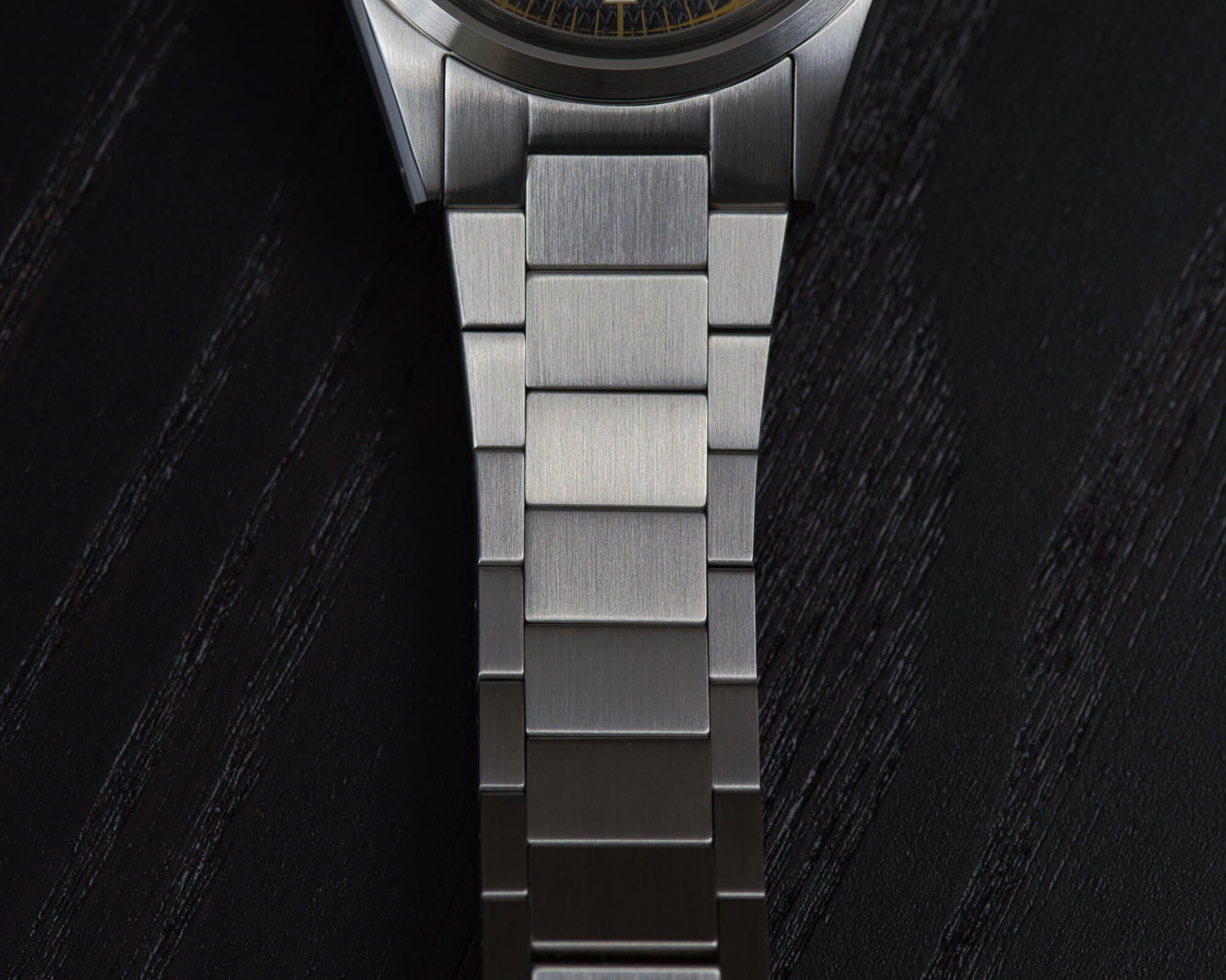 If I have a single gripe about the watch, it has to do with the bracelet being just a bit thicker than the case at the end of the lugs. It’s about 3/10 mm wider at the transition. It does not affect the wear of the watch, or the appearance of the watch when worn, but does stand out at certain angles. For me, it’s barely a footnote, but it’s something that the more anal-retentive observer may notice. I asked Lauren and Lorenzo about this, and they had noted it, but they made a conscious decision to keep it the way it is. By reducing the thickness of the links, they were concerned about lessening the structure of the bracelet, a compromise the weren’t willing to make. Frankly, given the choices, I think they made the right pick. 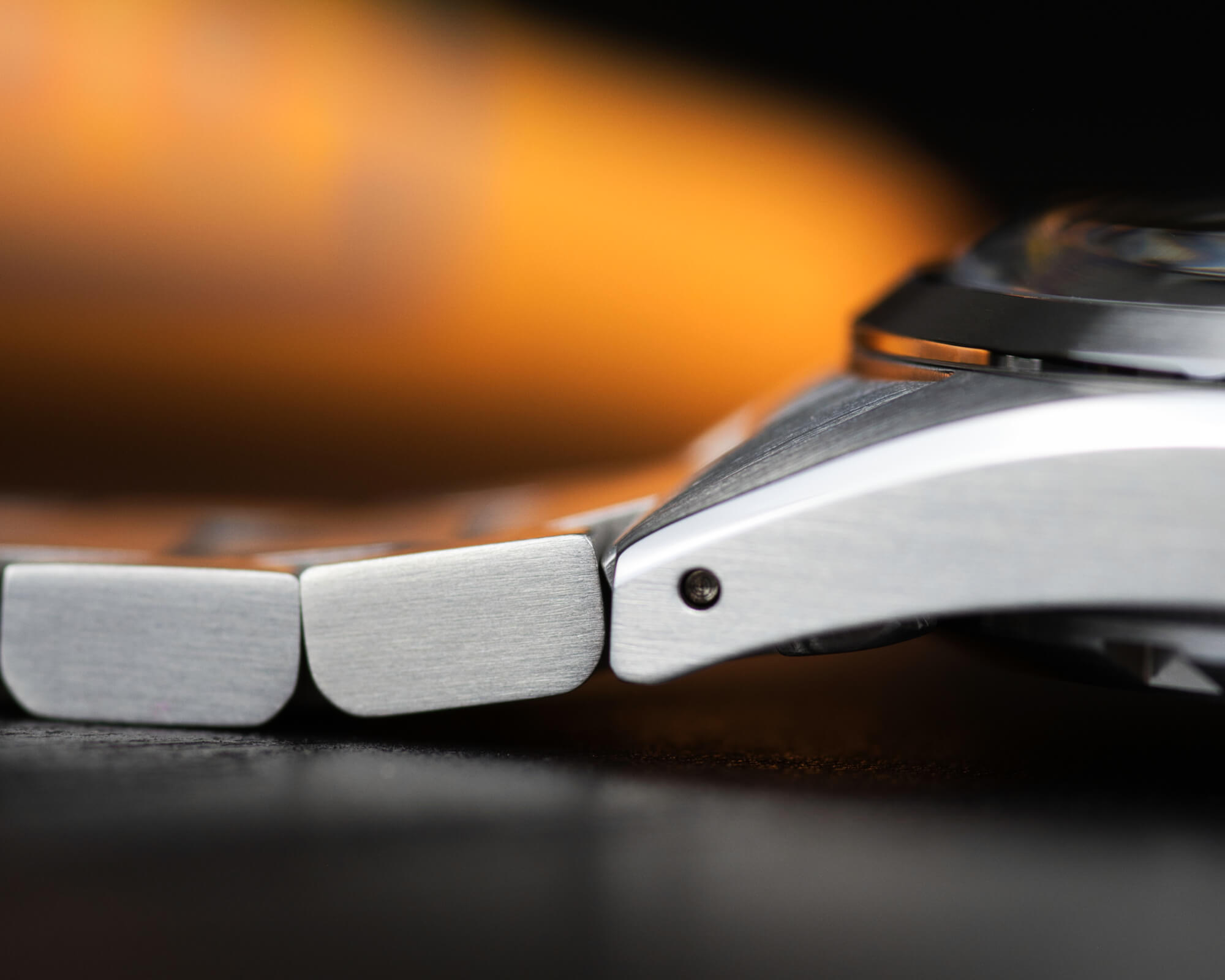 If you haven’t listened to our 40 & 20 interview with Lauren and Lorenzo, I strongly recommend you stop what you’re doing and turn it on. Although it would be a fallacy to argue that a watch is any better or worse because of the people who make the watch, Lauren and Lorenzo’s vision and goals for Lorier brought the whole thing into focus for me. Knowing the story behind Lorenzo’s fogged-up Omega, or knowing that they chose to pay for additional R&D in order to accommodate an acrylic crystal (as opposed to the more ubiquitous sapphire) because they just… wanted acrylic, or knowing what they are trying do with their watches, and then comparing the results, has given me an increased level of appreciation for Lorier and its watches.

Not that they need the extra appreciation. As of this writing, each of Lorier’s watches is wait-listed until late 2020. If you think you want one of these watches, I strongly recommend getting on that waiting list, (which, as an aside, I think is an excellent way to handle a supply deficit – costs you nothing, gets you in line, and is risk-free).

Check out more Lorier reviews from The Watch Clicker

More Images of the Lorier Falcon

Everett is a PNW native, and dyed in the wool hobbyist at-large. Always fascinated with a challenge, over the years Everett has taken on juggling, sewing, bowling, marathon running, fly-fishing (and tying), photography, advanced cribbage strategy, and the Rubik’s cube. Everett got into watches in 2015 after spying a colleague’s Tag Heuer 2000 at happy hour. It quickly became apparent to him that the media-space for affordable watches was seriously limited. Sitting on his couch one evening, scouring threads to find a dress watch, Everett messaged his best-friend, and budding watch enthusiast, Andrew, and said, “I want to start a watch podcast.” Andrew, an action-man and serial hobbyist himself, was in. the rest, as they say, is history.