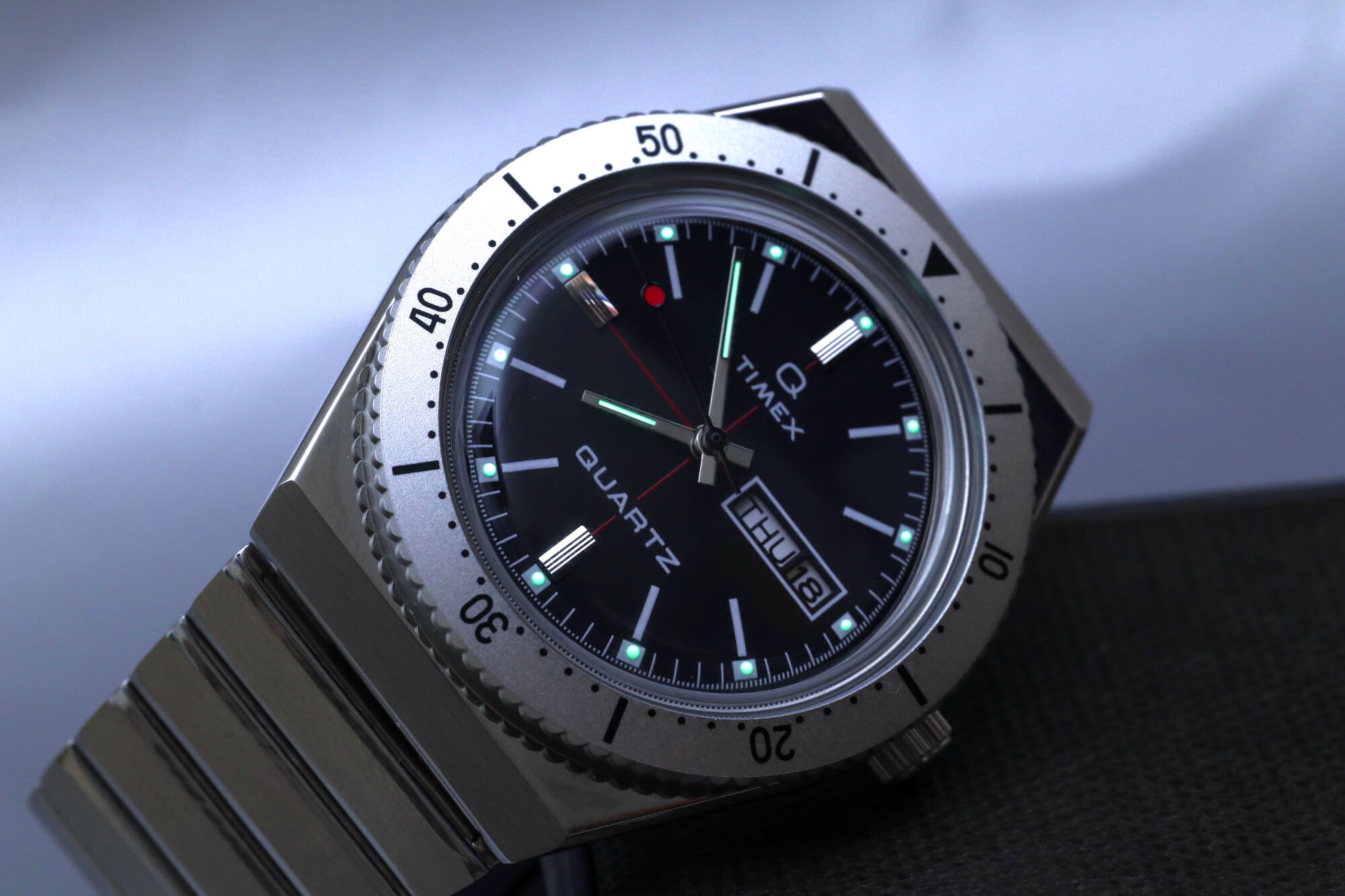 Collaborative watchmaking is nothing new. From the upper echelon of MB&F and Moser’s recent double crossover with the LM10 and LM101 to the bright red and green Undone X Sriracha diver (yes, really), collabs are wild, wonderful, and clearly something you’ll just need to get used to if you’re going to swim in these horological waters.

American stalwart Timex is no stranger to collaborations and of late they seem to be favoring Todd Snyder. Since 2016, the two brands have collaborated, at first with a simple limited-edition strap affixed to a standard Timex Waterbury, then evolving into special editions that see entirely new colorways. The watches are almost always inspired or directly copied from Timex’s vintage catalogue, and the most recent Q Timex is no exception.

Originally released in 1979 during the quartz boom that forced Timex to shift their offerings from tick-tick-tick to tick-tock, the Q was reissued in May of last year to great fanfare (not least because of the Pepsi dive bezel the initial model featured). The new collaboration is the first time Todd Snyder has played with the Q line, and it brings a more sedate black and silver colorway with an updated bracelet, without increasing the affordable price of $179.

With eminently reasonable dimensions and a flat polished midcase, the time appears presented to the wearer on a silver platter. The black dial with white and silver markers, accented by a red lollipop on the seconds hand, allows for excellent legibility, including better-than-expected lume.

Much of the wearability is due to the bracelet. A departure from other Q models which feature a woven style, the Timex x Todd Snyder Q bracelet is exceptionally thin and features wide links that are brushed with polished bevels. The look complements the case and allows for some pleasing light play.

The dial on the Q is almost identical to the original. A matte black dial features printed white hour batons and polished applied cardinal indices (save for 3 o’clock, which is occupied by the white day-date window). Yes, even the applied polished markers are exactly the same as the original dial, featuring beveled outside edges and three interior grooves, all complementing the polished accents of the case.

At 12 o’clock you’ll find the Q logo and the Timex brand name. QUARTZ is prominently printed at 6 o’clock; Timex doesn’t want you to forget that you have a quartz watch, and that having a quartz watch that is so publicly quartz is a cool thing. I’m sure if they could’ve put a chime in that declared, “It’s quartz o’clock!” on the hour, they would have.

Everything is in balance. The dial, while full, is not cluttered. The hour and minute hands reach the top of the Q and the top of the hour markers, respectively. The seconds hand also extends to the outer edge of the hour markers. Lume pips are placed just beyond the indices on small white squares, and the baton hands feature slivers of lume, almost mocking you in their slenderness. The lume is actually quite good: evenly applied and after a quick step outside on an overcast day—had to get the recycling out to the curb—the pips and hands shone brightly enough for a Daytime Emmy®.

The most pronounced element of the dial, perhaps, is the red reticle centered on the dial. It’s a nice touch of color on an otherwise staid watch and it matches the red lollipop on seconds hand. The black and red, for some reason, strikes me as very Blade Runner-esque and I welcome it. There is only one clear divergence from the original Timex Q dial from 1979. Wherein the original’s day-date window was two separate but connected white boxes, this reissue removes the white partition in favor of a solid black bar. The difference is small and of no consequence.

Much like the dial, the case and all its details are a 1:1 reproduction of the original. In fact, the case is even more faithful. The Timex x Todd Snyder Q is all about angles and big open surfaces. The midcase is fully polished save for the rough horizontal brushing above the hooded lugs. That silver platter I mentioned is on full display every time you look down at the watch. In most watches, the case is a natural and organic outflow of the dial—there’s fluidity between the two. The Q is more abrupt in its lines, making the dial seem separate, as if resting upon the case.

The frosted bezel surrounds a high-dome acrylic crystal (that I somehow managed not to scuff). The visual separation created by the bezel is strong; while the same shade as the rest of the case, the bezel’s frosted finish allows for excellent contrast and tamps down a bit on the aforementioned abruptness. True to the original, the bezel is bidirectional and held in position through the miracle of friction. Given the overt and intentional throwback nature of the watch, I’ve got no issue with it being bidirectional, and simply see it as a timing bezel, especially since the watch is only water resistant to 50m.

Perhaps the diminutive crown could use an additional millimeter, but at this price point, I’m not expecting perfection, just functionality. And the crown is indeed functional. Pull the crown out to the first position and watch the day fly by with a satisfying little click. One drawback is the lack of quickset day—one must do full rotations back or ahead to correct.

The bracelet is another update for the watch, perhaps the most noticeable. The original bracelet had some sort of H-link thing going on that I can’t quite describe, but the bracelet of the Todd Snyder edition replicates the rough brushing on the hooded lugs for each link. The end links feature 18mm spring bars, but are 22mm to meet the case, and the bracelet tapers to 16.5mm. A simple folding clasp offers micro adjustments, while the removable links feature sliding pins accessed from the back and workable with anything long and pointy.

The bracelet does not by any measure compare to the solid-link stuff that most microbrands put out these days. It’s jangly and lightweight, the clasp is the same, and while I had no issues, I can’t speak to the security of sliding pins. But it’s easily sized, comfortable, and looks great, so who cares?

Perhaps the most curious thing about the Timex x Todd Snyder Q is the total lack of Todd Snyder branding. Only on the box will you find any mention of the collaboration. Humility? Probably not. More likely the marketing wizards recognized the watch would sell more without extra branding. People are, after all, buying a Timex with Todd Snyder involvement, not the other way around (had you heard of Todd Snyder before they started working with Timex? Because I hadn’t.).

At $179 the Timex x Todd Snyder Q is a great deal. It’s got classic vintage styling, subtle flair, and a perfect bracelet that pairs perfectly with the case. This watch is a great option for a grab-and-go, and will be at home on nearly any wrist. While it’s not the quality of some of the other watches we review here, it’s well worth its price. Sadly, this edition was limited and is sold out, but can be had on the secondary market for $250 to $325, the lower end of which is still not a terrible deal.

Check out more quartz watch reviews from The Watch Clicker

More Images of the Timex Q

Mike became obsessed with watches in 2015 after spending an inordinate amount of time finding the perfect wedding watch (the Frederique Constant Slimline Automatic). He prefers a well-executed date window or none at all, and strives for a diverse collection with limited overlap. When not fretting over which watch to wear with which strap, he works as an emergency mental health clinician in Northern Virginia, where he lives with his wife and son.