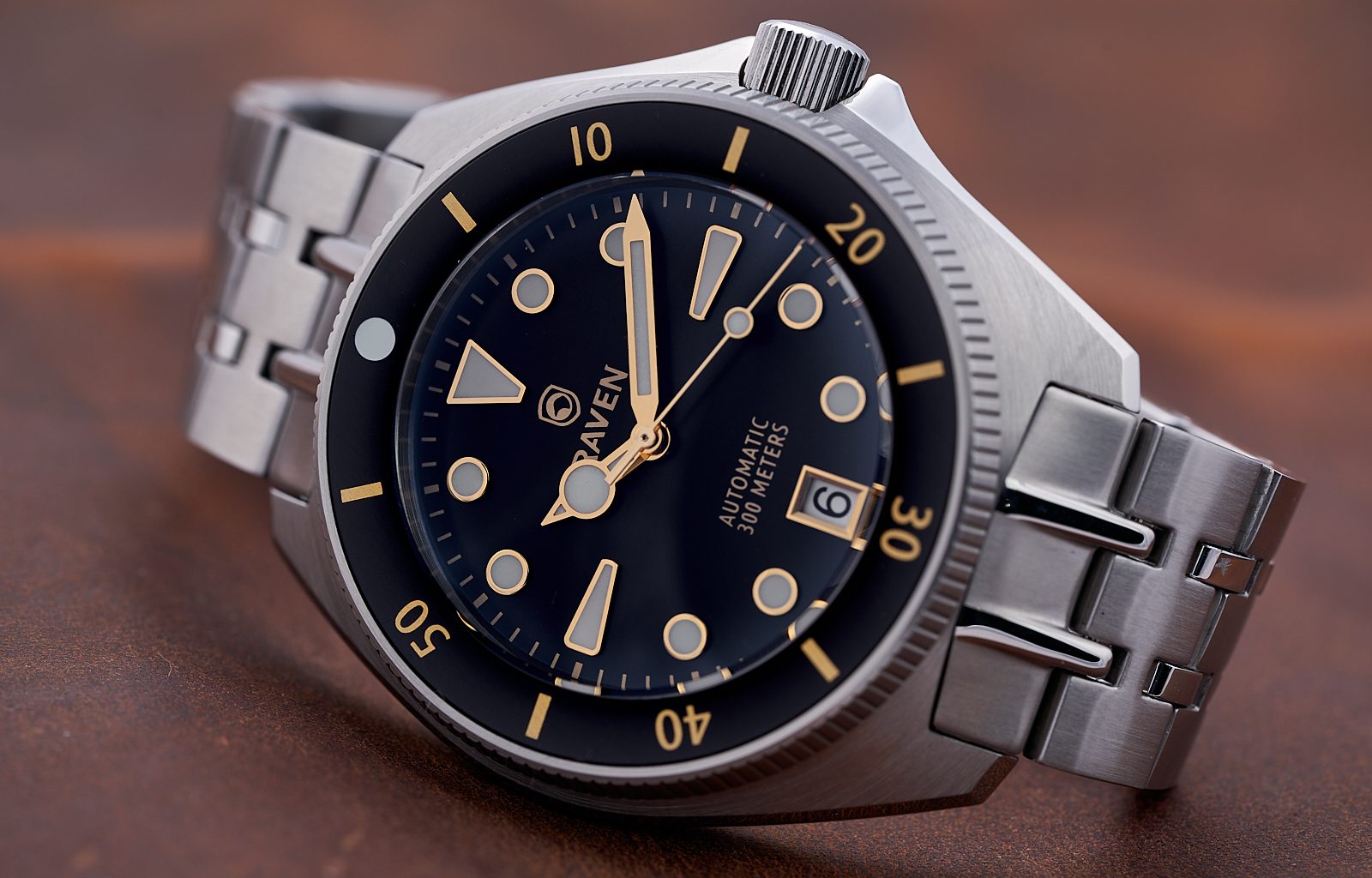 Raven makes some of the toughest microbrand tool watches around. Most of their watches fit into what some would call true tool watch sizing — big and bold. The Raven Solitude is a departure from that in some respects as it is the smallest watch they currently offer. The Solitude has been around for a few months, but Raven recently collaborated with Worn & Wound for a limited edition Solitude with gilt accents.  Let’s take a look.

I had a chance to try on most of Raven’s models at Wind Up last October and while I found all of them comfortable, the Solitude is a completely different story. The case’s shape is unique, not only among Raven’s lineup but among most other tool watches. The case is almost geometric with a few sharp angles softened by subtle curves and chamfers. This translates to a watch that feels great.

The Solitude LE came with a rubber strap and one of Worn & Wound’s ADPT brand NATO straps. The rubber strap is comfortable and pairs well with the overall color scheme of the Solitude, but I wanted to try the watch on Raven’s proprietary bracelet. The bracelet is one of the few original designs I’ve seen recently, and it looks great on the Solitude. Because of the link design, it feels closer to a Jubilee on the wrist. There is plenty of articulation and it adds up to a comfortable watch.

When I received the Solitude, I heard multiple reports of how difficult it was to size the bracelet. Before I sized the bracelet, I watched Raven’s YouTube video specific to this bracelet and it made the bracelet sizing a breeze.  There are some intricacies to the bracelet but once you know what you are looking for, it is a standard bracelet-sizing operation.

Modestly sized at 40mm wide and 47mm lug-to-lug, the Solitude should be a great fit on a variety of wrists. I found it to be just right on my 6.75” wrist. The 13mm case height is worn well on the Solitude as the lugs curve down adequately enough to allow the watch to feel thinner.

Raven’s original colorways for the Solitude included fan favorites like black and white but also some less common colors like bright blue and gray. The Solitude LE adds one of the hottest watch trends, gilt. Black dial watches with gold accents, or gilt, are popping up almost every day and while the color scheme doesn’t work with some watches, that isn’t the case with the Solitude. The gilt accents work extremely well with the Solitude. It allows the watch to dress up a little.

When I received the Raven Solitude LE, the first thing that came to mind was that it scratched my itch for a Tudor Black Bay Fifty-Eight. Where the Solitude LE shines is that it incorporates the gilt accents and doesn’t use vintage lume. The lume looks new (as all lume should) and glows brightly. Raven does a fantastic job with their lume applications.

If you are familiar with the other Solitude variants, you will be happy to know the case on the LE is the same. The only difference is a unique caseback design highlighting the collaboration between Raven and Worn & Wound.

As I highlighted before, the case on the Solitude is unique. When looking at it straight on, it appears almost geometric as opposed to circular. The crown guards and lug shape are what contribute to this unique look.

Raven did a fantastic job on the finishing of the case. The brushing is executed well, and the polished chamfers look great. The polishing that runs along the crown side of the case extends to the top of the crown guards, creating a great contrast between the different surfaces.

The Solitude’s 120-click bezel is a pleasure to operate. Raven torqued the bezel tension perfectly, so it not only feels secure but is easy to operate without having to palm the bezel to turn it. The Solitude LE’s bezel is unique in that only the pip at 12 o’clock is lumed. The other variants (except for the green dial) have fully lumed bezels.

Even if you’re not able to procure the gilt dial Solitude LE, the other colorways are just as appealing. Raven has put enough dial colors out there to fit almost any taste, including the recently released 12-hour bezel variants.

Raven has created a cult following when it comes to microbrand tool watches. Not only do they look tough, but they are built exceptionally well. The Solitude is no exception. Considering what you are getting in the Solitude package, it is a great value in a dive watch. If you have been looking at Raven’s other offerings and thought they might be a tad too big, the Solitude is the perfect watch for you.

Looking for more dive watches? Check out other dive watch reviews from The Watch Clicker

More Images of the Raven Solitude