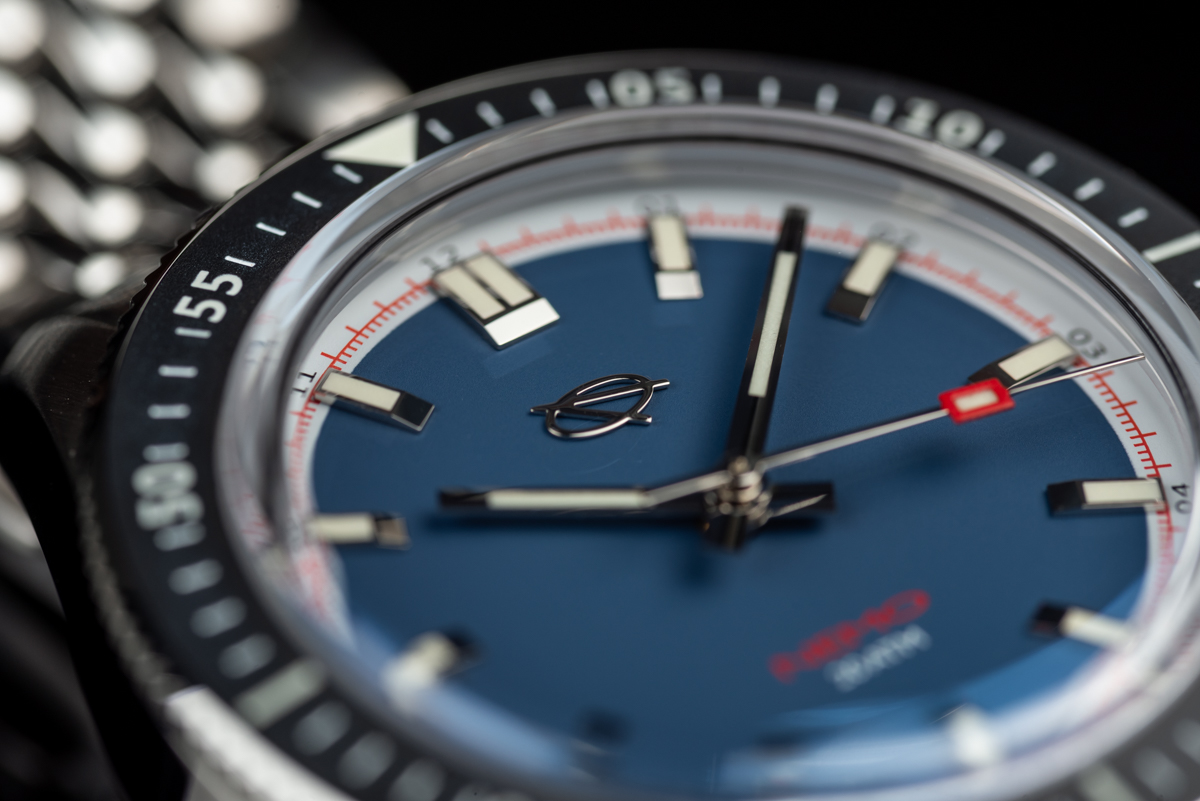 It’s rare that a watch brand can pull off a multitude of colors on their watches and still be loved by almost all. The only two brands I can think of that do it the right way are Farer and EMG. The EMG Nemo launched in late 2018 with an array of fun colors that fit right in with the dive watch ethos. In addition to traditional dive watch colors like black and white, EMG added colors you don’t see often like yellow, powder blue, dark green and the one I have here, denim blue. Each color variation has its own personality and will appeal to different buyers for various reasons. Underneath each quirky color is a solidly built dive watch that is comfortable to wear and packs a lot of punch in a small package. 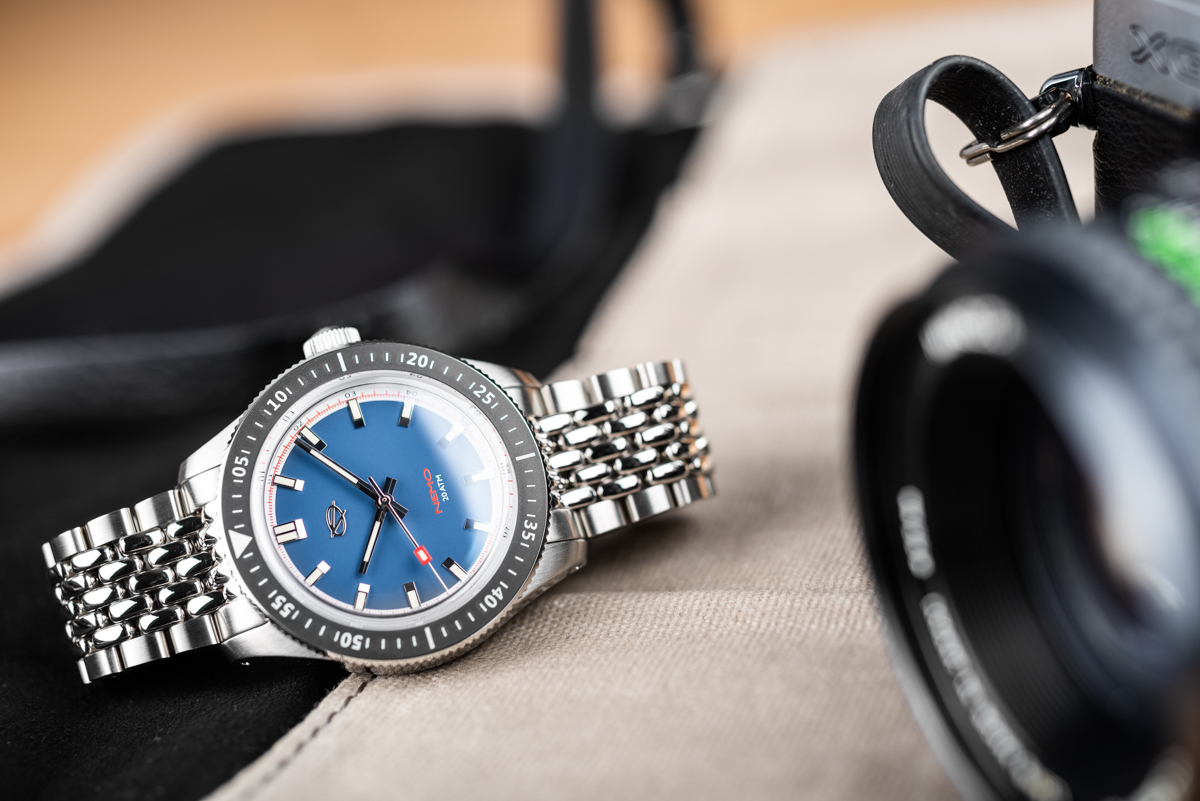 Built from all over the World

The ownership behind EMG is an interesting story. Founded by three members from WatchUSeek, who to this day have never met each other in person, are Eric, Derek and Eddy. Working across different parts of the world, each with his own special set of skills, they created their first watch in 2016. The DL63 Panda Chronograph was launched to serve the microbrand market, which had largely been dominated by divers.

The EMG Nemo is the second iteration of one of the member’s earlier WatchUSeek exclusive creations, the HKED Emperor. Reading the spec sheet on the Nemo, many buyers would most likely put their money down before even seeing what the watch looks like. Coming in at 40mm wide, 47mm lug-to-lug and 13.5mm thick, the Nemo balances small size with proper dive watch chunky attributes. The Nemo never feels dainty on the wrist, nor does it weigh you down. 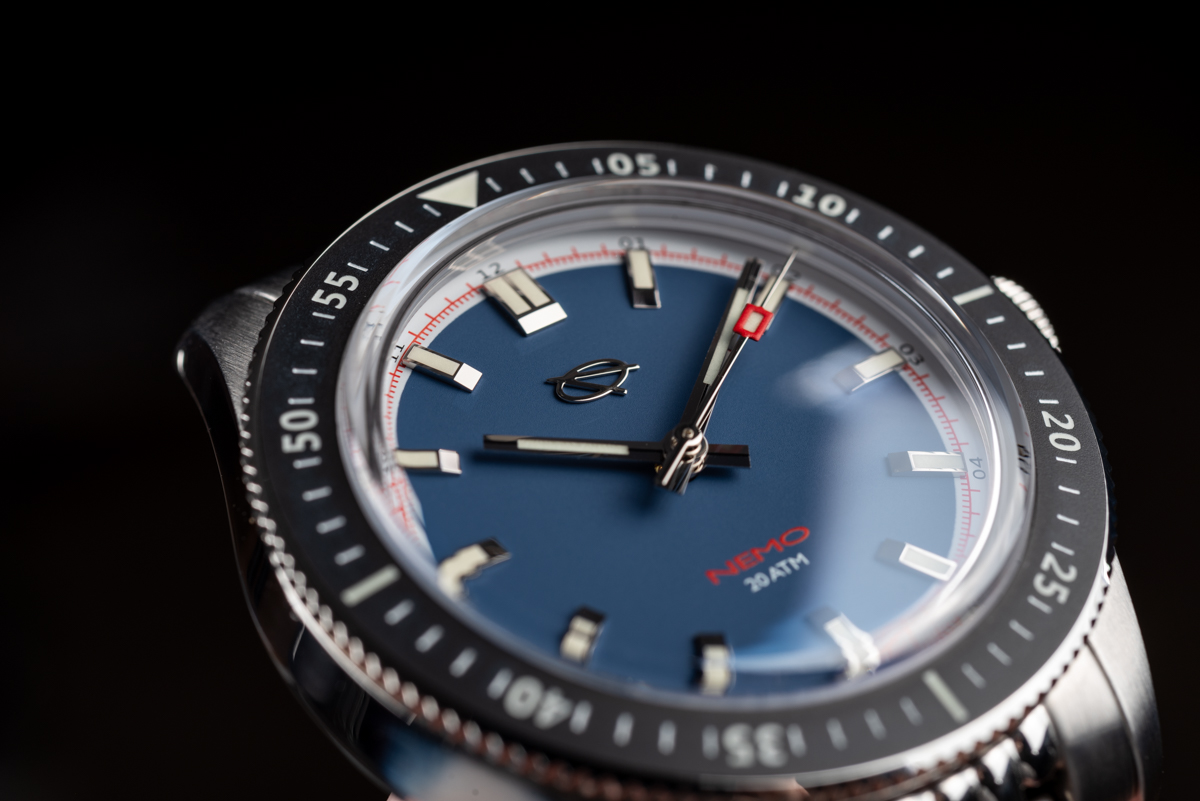 Perhaps the two most noticeable elements on the EMG Nemo are the large domed sapphire crystal and the various color combinations. No matter what dial color you choose, your Nemo will have a white chapter ring with red accents and a red-tipped seconds hand. EMG picked all the dial colors so that the white chapter ring and red accents complement the dial instead of working against it. Any change in any of the colors may have created an eyesore, but EMG nailed their combinations.

The dial color I have is called denim blue and after seeing it in person, the description of the color is spot on. It is not a bright blue, nor is it too dark. The dial pops out at you in direct light and fades away to almost black at night. The polished and lume-filled applied indices, combined with a unique hand set, provide excellent readability, even at night. I found that I only needed the smallest glint of light to reflect off the polished surfaces to tell the time. 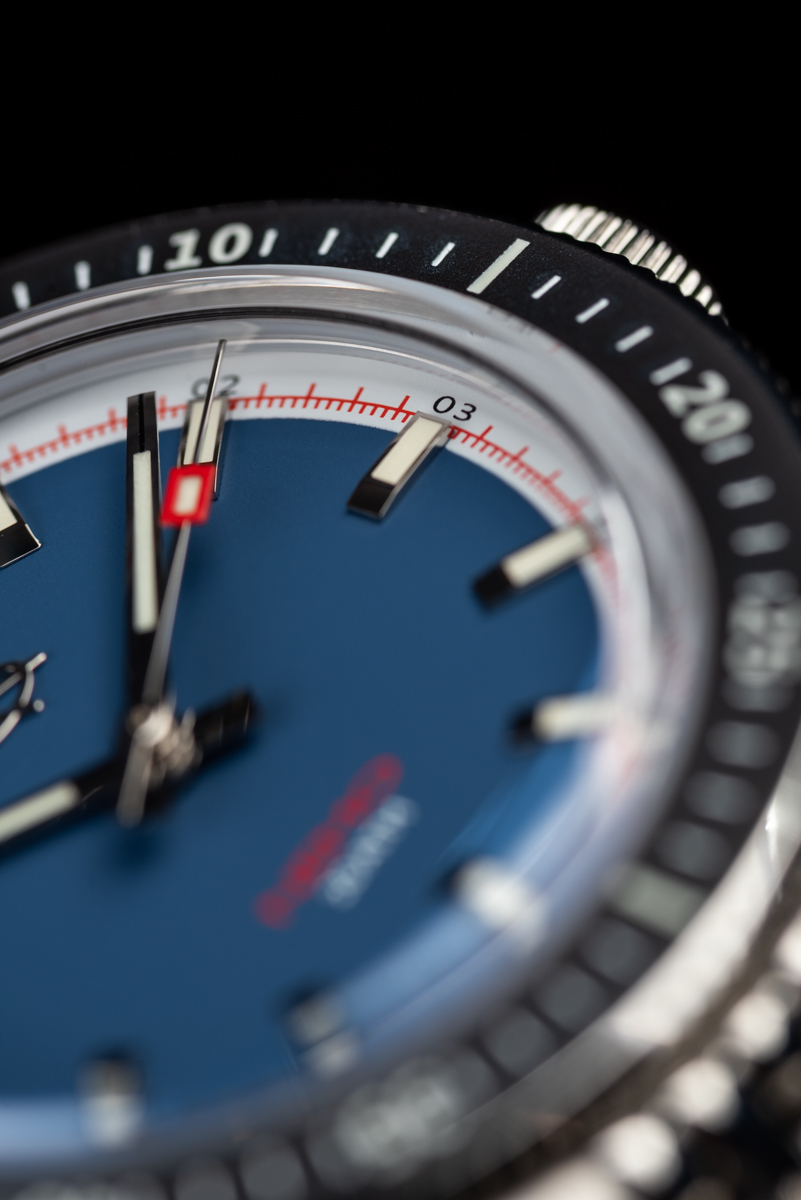 When I first unpacked the Nemo out of the 5-slot watch roll EMG includes, I was not sure about the white chapter ring. I thought that it might become distracting, but because of the high dome on the sapphire crystal the chapter ring becomes an accent when staring at it straight on. The crystal breaks up the middle of the chapter ring, so it appears as if the dial is bordered by a thin, white line. It still allows you to accurately read the chapter ring, which contains red hash marks with a 12-hour scale on the outer edge. I don’t know if it was intentional, but it looks great in the metal.

All the Right Elements

The matte dial is complimented by a matte black bezel, no matter which dial color you choose. The black bezel has one-minute hash marks with numerals every ten minutes. Each 5 minute increment on the bezel is filled with lume. Both the dial and the bezel have Super-LumiNova C3 X1, which will appear white with a slight green or yellow tint but which glows brightly green at night. I found the lume to be properly filled in all areas and extremely bright, even providing some glow during the day in the shadows. The bezel slightly extends over the case, making it easier to grip. With that said, my bezel was very tight and a little difficult to turn at first. I can’t speak to whether it will loosen up over time. My fingers would also bump the bezel when unscrewing the crown, but it did not impede me from doing so. 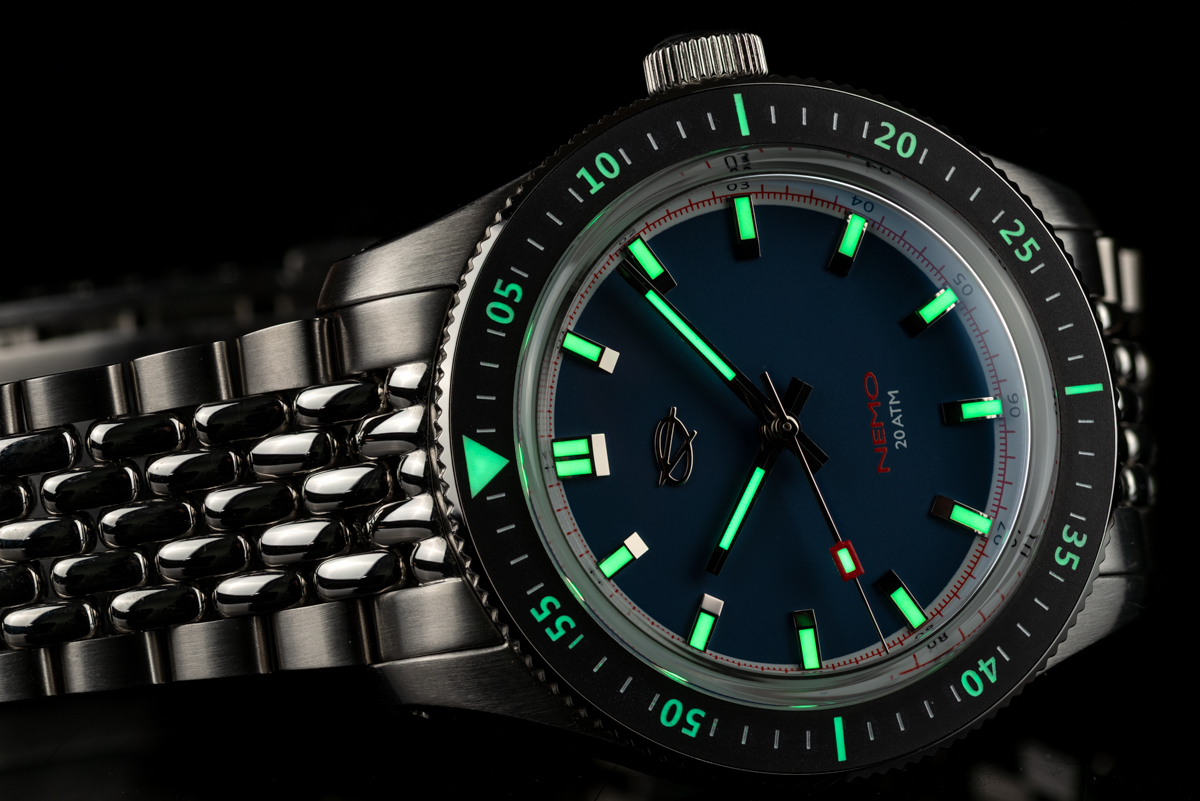 The crown on the Nemo is large and a pleasure to wind thanks to the Miyota 90S5 under the hood. I have an affinity toward Miyota automatic movements because of how they wind and their 28,800 vph beat rate. There are some who would prefer a Seiko NH series movement in almost everything microbrand, but I like the usage of something different à la the Nodus Avalon. 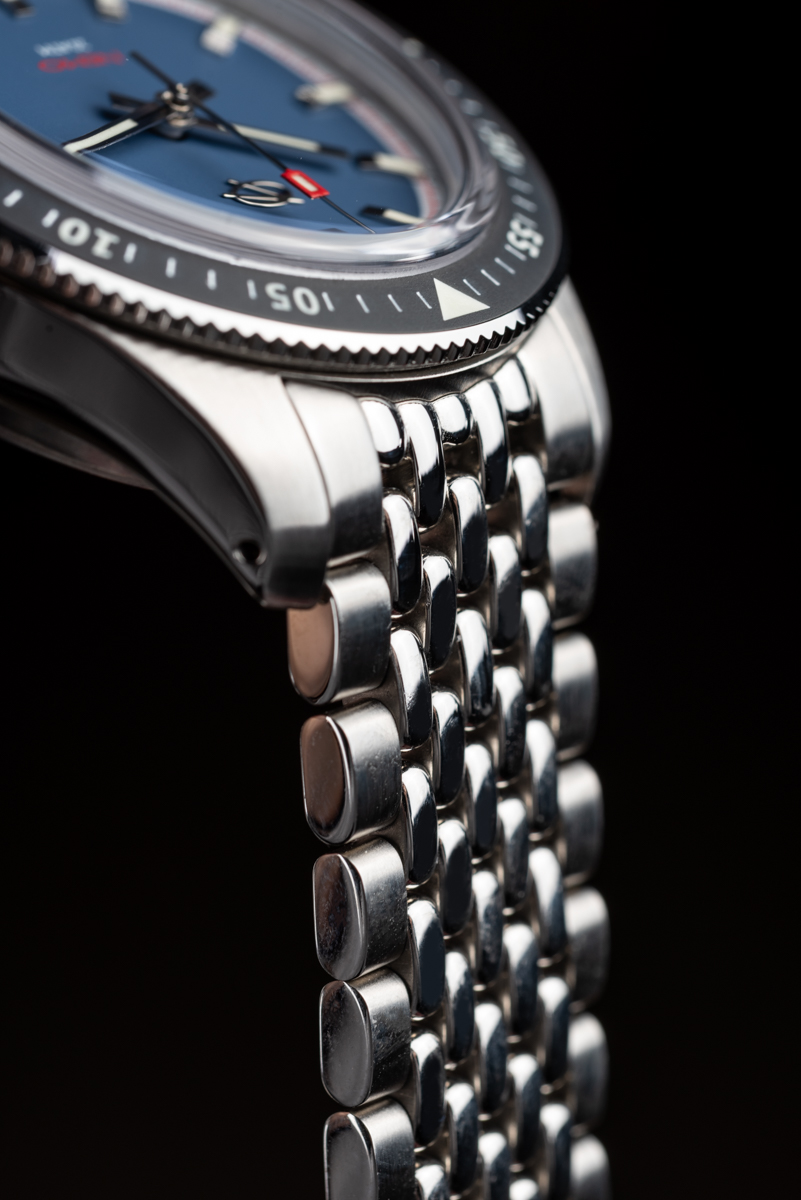 The rest of the case is nicely finished with brushing on the top of the lugs and polished surfaces on the sides of the case. The lugs also feature drilled holes, making strap changes a breeze. However, the included beads of rice bracelet on the Nemo is beyond comfortable. The 20mm bracelet tapers to 18mm as it meets the clasp, giving it a solid feel all the way around. The clasp on the Nemo features the EMG logo and the squid logo, which is also stamped on the back of the case. The Nemo is secured to your wrist via a double push-button deployant and V-lock foldover. 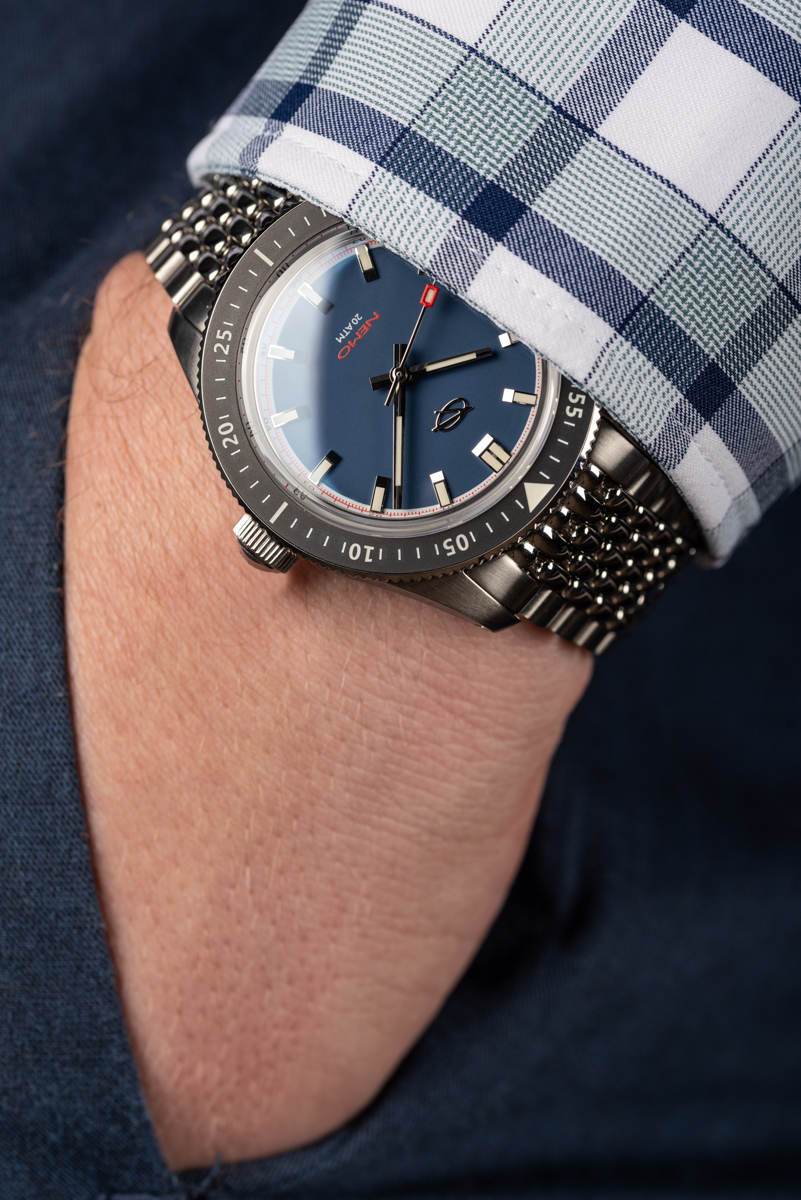 I’ve reviewed several microbrand divers. I try and stick to the ones who are doing it right, not just raiding the parts bin and throwing it up on Kickstarter. I’m thankful that EMG went about this watch the right way. Through an original dial design with some not-so-common colors, the Nemo is a real looker. Coupled with other design choices such as the matte black bezel and comfortable beads of rice bracelet, EMG built the whole package. If you’re in the market for a moderately sized diver that looks and feels great, the Nemo will certainly fit the bill.

EMG, through the Nemo and their other releases, have proven that they are a forward-thinking micro. There aren’t many microbrands that put out a diver and a chronograph, much less 3 chronographs. Given that this was EMG’s first foray into the world of under-$500 divers, I am excited to see what they put out next.

More Images of the EMG Nemo